Warning: Parameter 2 to wp_hide_post_Public::query_posts_join() expected to be a reference, value given in /home/globali6/public_html/wp-includes/class-wp-hook.php on line 287
 Thoughts on my first Africa trip • Global Introvert Skip to content

Thoughts on my first Africa trip

When I prepared for my first Africa trip I heard a lot of advice beforehand. Unfortunately, some of it painted a very negative image of this continent. Sure, there are the jealousy-inciting accounts of wildlife encounters and the amazing photos of the landscape. But then, there’s also warnings of crime and tourist-scams, the threat of exotic diseases, and the knowledge that culture shock  can be great.

With all these different information going round it can be difficult to be clear on what to expect. While I was mostly looking forward to the trip I couldn’t completely stop fears from creeping in. Do I have to be wary of every stranger because they may potentially mug me? Can I eat any of the food without getting sick? Is it even possible to stray from the touristy places without putting myself into danger?

I can imagine many others may have similar questions when approaching their first Africa trip, or when they are still in the process of deciding whether to go at all. Let me tell you how it all turned out for me, in the hope that maybe I can take away at least some of your worries. 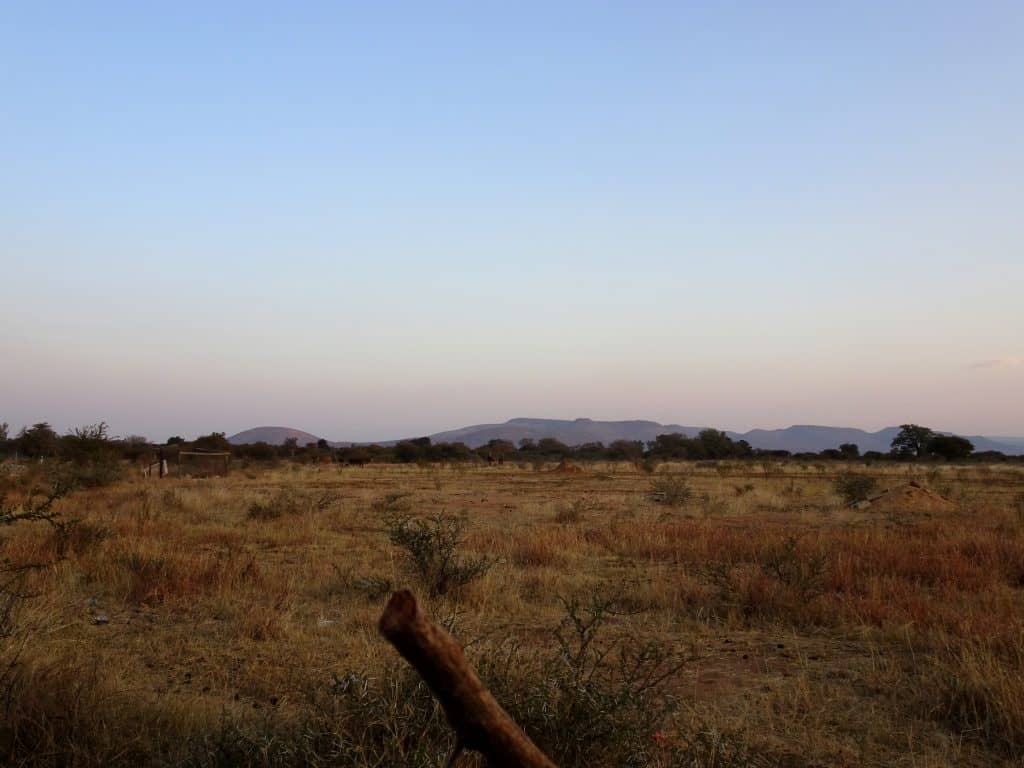 The first thing I noticed upon arrival in Africa was how friendly the people are. It may sound mean when I say I didn’t expect this. I don’t mean to say that I thought they would be unfriendly. More, that I heard so much about crime and tourists being mugged and cheated that I was wary. However, when I arrived everyone was incredibly nice.

It started with the people at my hostel in Zimbabwe, Mumbo Backpackers in Victoria Falls. While the hostel itself is extremely basic, the people there treat you like part of the family. Every morning they personally cook breakfast for every guest – at whatever time you happen to stroll into the kitchen. The helped me out with all my questions. They even talked to a tour guide for me when I couldn’t pay him cash and convinced him to let me pay by card (which can be an issue in Zimbabwe). They really do everything to accommodate their guests, and always in a very relaxed, no worries kind of way. 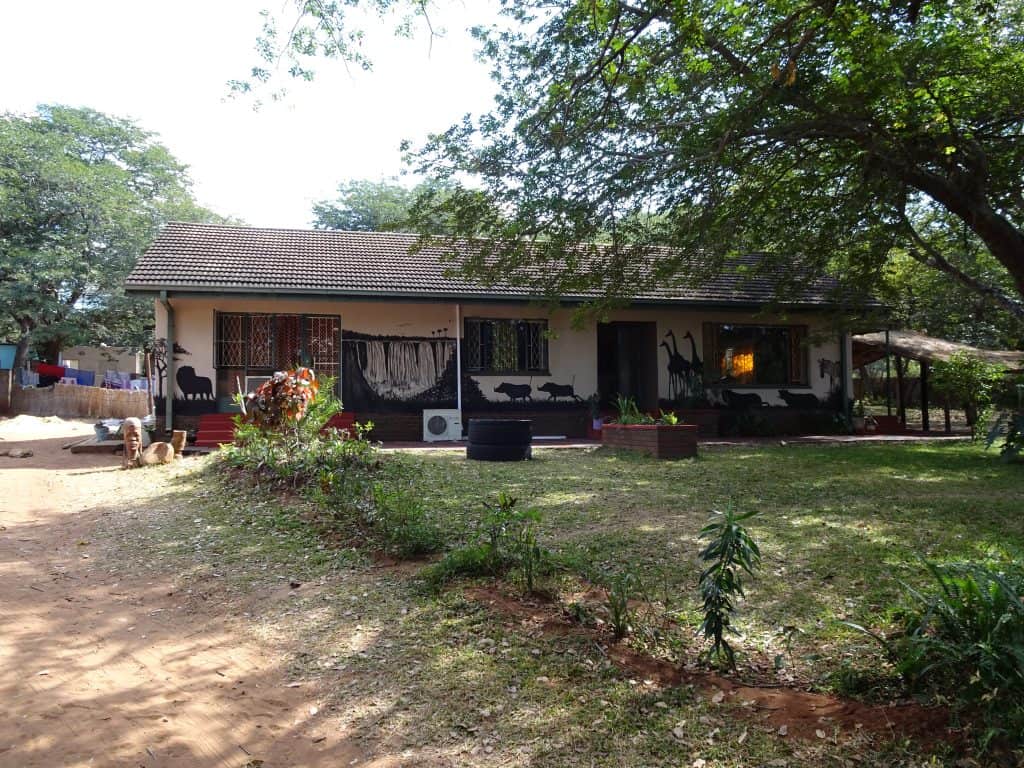 The friendliness is everywhere

It continued when I entered the town itself. If you walk through an African town as a white person you have to be prepared that people will approach you for money. They’ll try to sell you souvenirs, offer you a taxi, try to show you the way – anything for a little tip. The point is, though, that even while doing this they always stay friendly. Not once did I get the feeling that someone might get aggressive if I said no. On the contrary, if you tell them no with enough determination they usually leave you alone. And they still wish you a great day.

While it’s not always fun to be constantly surrounded by strangers, no matter how nice they are – I’m still an introvert, after all – it never felt dangerous. And sometimes it can be helpful. When I walked across Victoria Falls Bridge to enter Zambia, I was only half way across when a guy asked me if I needed a taxi to Livingstone after passing the border post. I did indeed, and so he accompanied me to the Zambian border and got me a cab instantly.

Even at the border crossing itself – and all others I had to go through during this trip – I never had any problems, though I had heard before that border officials can be a bit of a pain. Maybe I was lucky, but I always found them to be friendly. 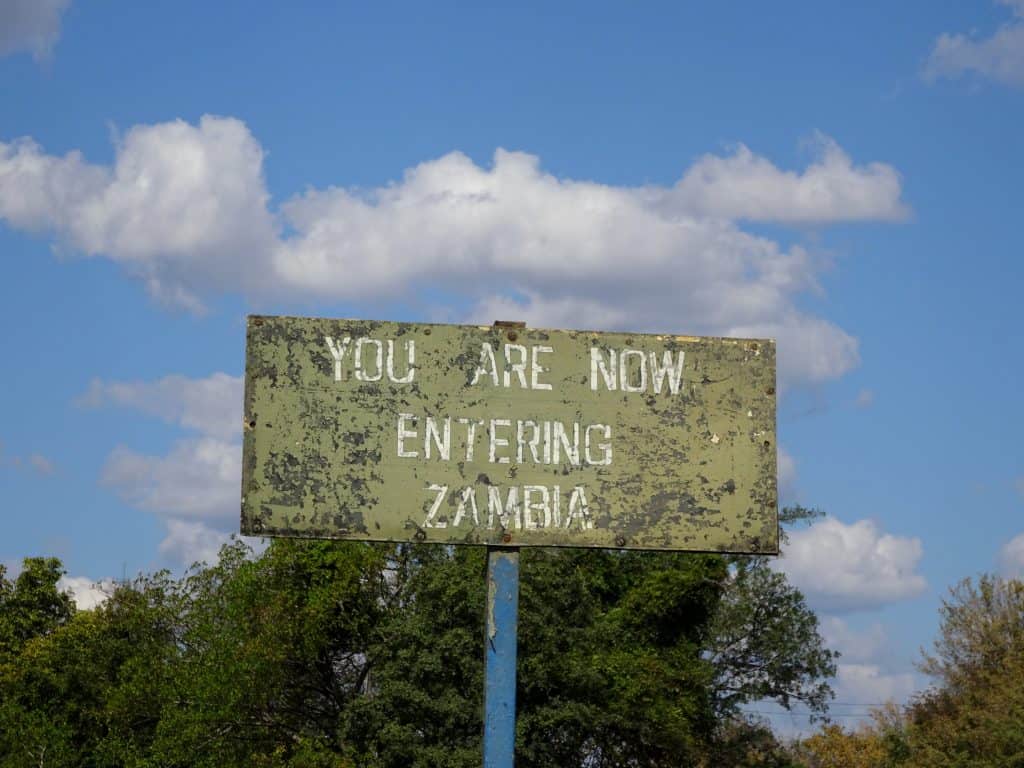 Not everything works the same way as in Europe

Because people are so friendly, they always try to make things work for you, even if it may be a challenge. Things aren’t always as easy as they are back home. I just said before that I had money problems while in Zimbabwe. That’s because it’s almost impossible there to get cash. There are plenty of ATM in Victoria Falls, but they were all empty. At the same time, people there often prefer you to pay them cash, as it’s just as difficult for them to get money out of their account as it is for you.

However, when the dollars I had brought with me ran out they usually let me pay by card. Or they found some other way to make it work. For example, when I did a day trip to Botswana I got money there and back in Zimbabwe I paid the organisation with Botswana Pula. Somehow, they always make it possible. 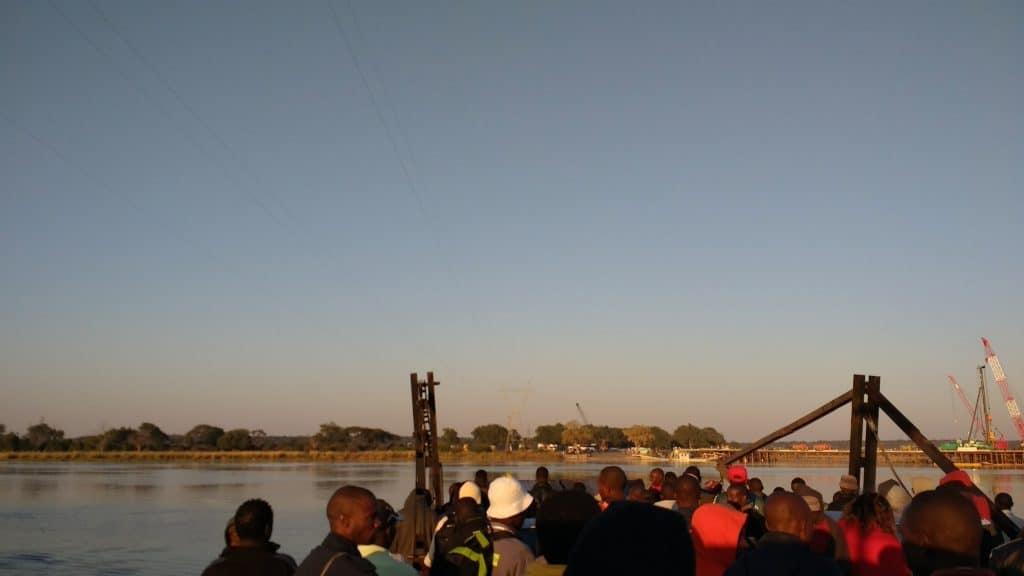 The joys of public transport

Talking about infrastructure, using public transport in Botswana was certainly an adventure!

In Livingstone I met up with a friend of mine from the US, Bethany. She has been in Botswana for two years with the peace corps. Some of her fellow volunteers joined us as well. After staying in Zambia for two nights we then travelled through Botswana together, always using public buses. Now, Botswana public transport is not something you generally find tourists using. I probably wouldn’t have done it if I hadn’t been with some people who had lived there long enough to know the drill.

Their busses are mostly sprinters, mini-buses for about 20 passengers. There is no real room for luggage, so we had to squeeze our bags into every available space on the already full bus. And then sit squeezed in between the other passengers for often several hours. It’s very cheap, but it certainly wasn’t the most comfortable of trips. Still, I guess it was an experience.

…and the dangers of it

In Johannesburg there were similar mini-buses used as a taxi system, but there I was told they are not safe to use for tourists. One, you have to stop them by giving specific hand signals to the driver, that signify where you want to go. Meaning, as a tourist unacquainted with these signals you’d have a hard time getting onto one in the first place. And two, the locals don’t like tourists to use them, because they are of the opinion that white people can afford other means of transport. As alternative, it is generally recommended to use Uber in Joburg if you don’t have your own car.

So public transport can certainly be an experience, but make sure beforehand it’s safe to use in your location. If in doubt you might be better off taking a more touristy alternative or rent your own car, even though it’s more expensive. It’s still better than putting yourself at risk. 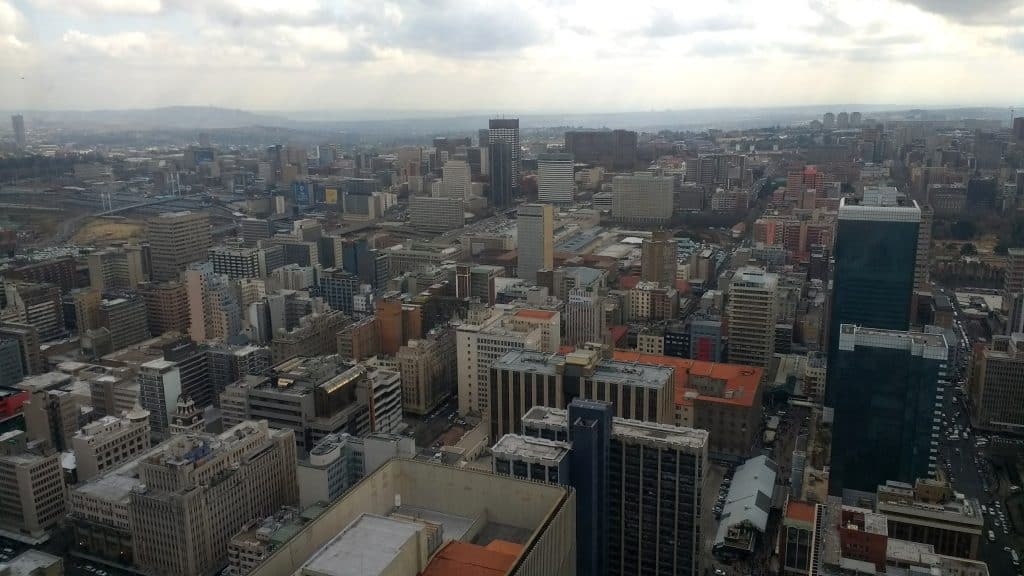 So, how safe is it really?

Safety concerns come up a lot when talking about Africa. Of the places I’ve been to, Johannesburg was the one where I felt the least safe. That had a lot to do with the fact that pretty much everyone told me beforehand how dangerous it is, that you should never walk around on your own if you don’t want to get mugged, and certainly not in the dark. Consequently, I rarely left my hostel alone, and if I did it was only during the day and for very short distances.

The one safety tip I got plenty of times was to keep your credit card and ID, and possibly some extra cash, somewhere on your body that’s separate from your wallet. That way, if you do get mugged, you only lose the cash in your “muggers wallet”, but not those more important items. There needs to be enough money in it to satisfy the muggers, so they don’t assault you in frustration, but little enough that you can afford the loss. 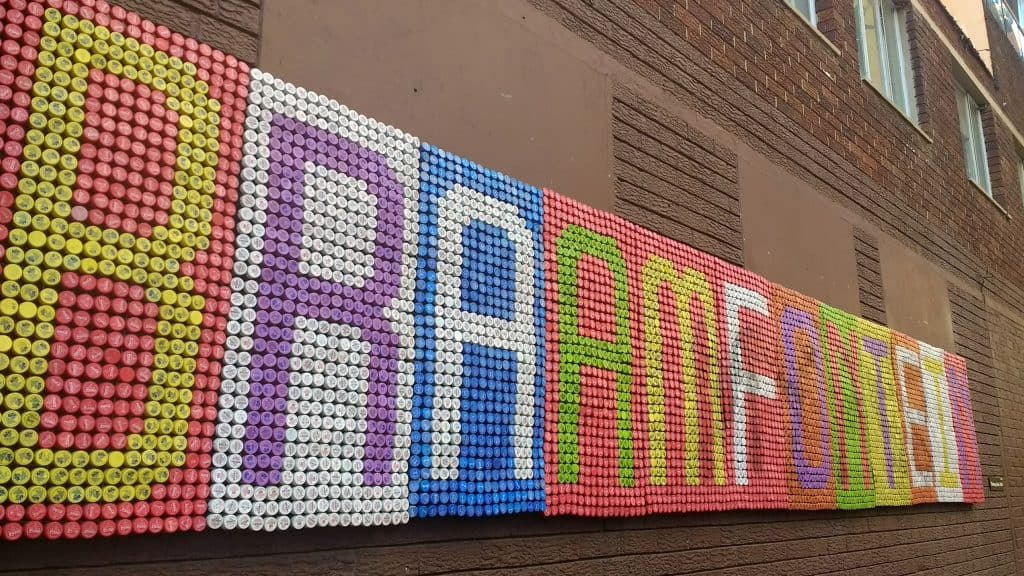 Most of the places I’ve been to I didn’t feel as unsafe as Joburg. Though of course it’s always a good idea to keep it safe and have an eye on your belongings. That doesn’t just go for Africa, by the way. Don’t get reckless. Listen to safety advice you get from more experienced travellers or hotel staff. If you’re careful and use your common sense, you should be fine.

You certainly shouldn’t let fear stop you from travelling there. You would miss out on a very special place that is unlike any other I’ve travelled to! And after all, you do want to show off with your cool pictures afterwards, don’t you? 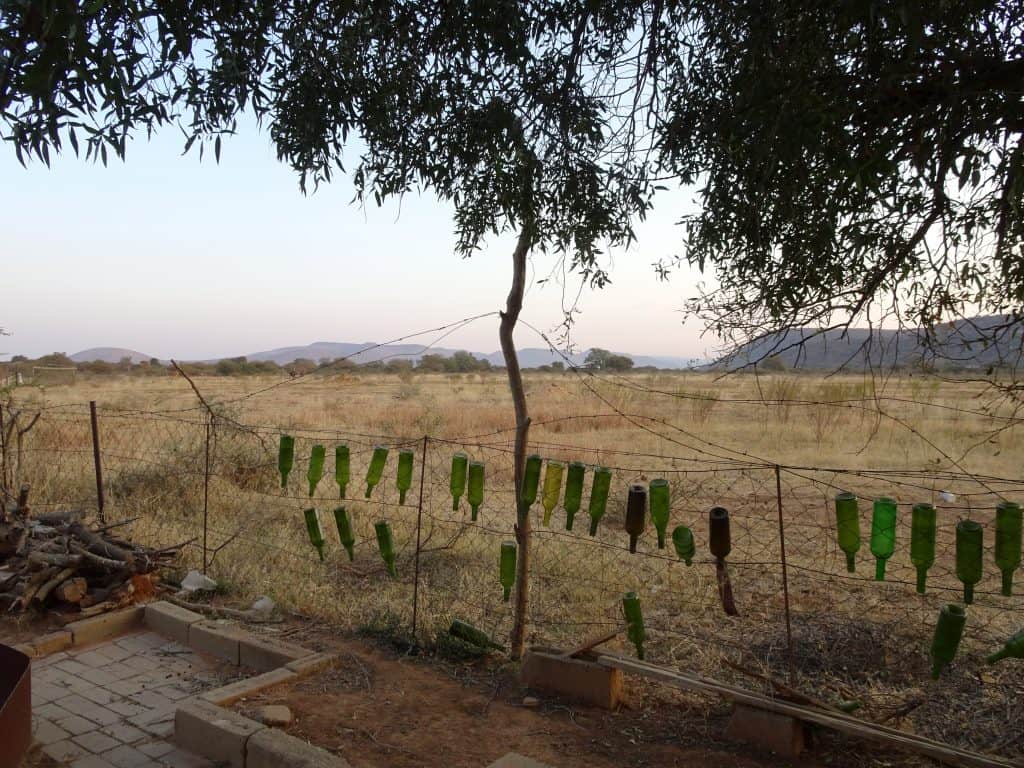 Have you ever been to Africa? What were your experiences? Share in the comments! 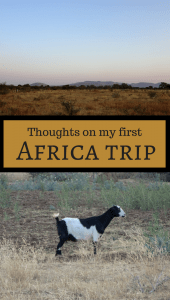