Warning: Parameter 2 to wp_hide_post_Public::query_posts_join() expected to be a reference, value given in /home/customer/www/globalintrovert.com/public_html/wp-includes/class-wp-hook.php on line 292
 How I survived white water rafting the Zambezi • Global Introvert Skip to content

How I survived white water rafting the Zambezi

I never particularly wanted to do white water rafting. When I saw that it was on the itinerary for my Africa trip my first reaction was wondering if it’s too late to chicken out. I was meeting up with a friend and some of her co-volunteers (they’re all Peace Corps) in Livingstone. We were going to travel together for a week. They had already had the whole trip planned before I decided to come along, and I simply joined in. Because I didn’t want any trouble I just said “do whatever you had planned, I’ll join you”. And that’s how I found myself rafting the Zambezi river.

It was the highlight of our two days in Livingstone, and to say that I was nervous about it would be an understatement. But I didn’t want to be the one to miss out either. So I bravely got up with everyone else in the early hours of the morning to be picked up for half a day of rafting with Bundu Adventures. 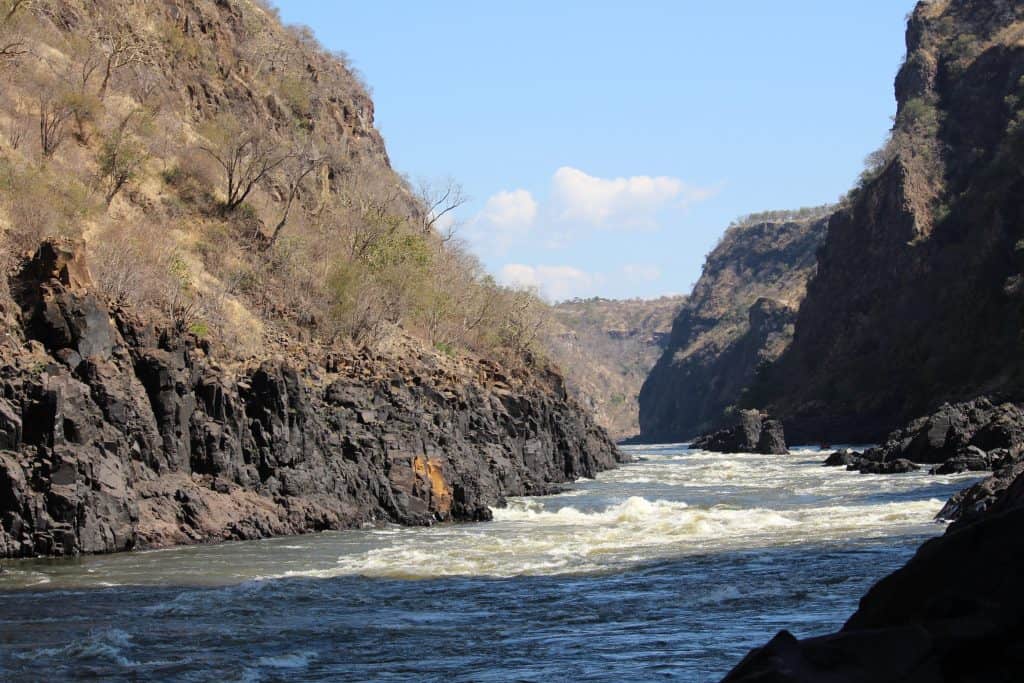 Why am I doing this?

After taking care of payment and everything else at the Bundu office, we got into their open truck, bundled into blankets against the morning chill, and left for the river. The rafting happens downstream of the VIctoria Falls. During the drive, someone mentioned something that did nothing to lessen my terror: there are crocodiles in the Zambezi!

I hadn’t even thought of that before, but now the prospect of getting into a raft and subject myself to the rapids in crocodile-infested waters seemed even less alluring. At least I found I wasn’t the only one being nervous. Except for two people in our group we were all rafting-newbies.

We tried to take it with humour and asked one of the guides how many people have gotten eaten by crocodiles so far. He said in the 15 years he’s been doing this job it was only one. Somehow that doesn’t calm me.

When we arrived at the river we got our safety vests and paddles, and were given the obligatory safety talk by Captain Potato. Yes, that’s really what he called himself. Is it just me, or do these safety instructions always just make you even more aware of everything that could possibly go wrong? I particularly liked the advice “if you’re in the water and there’s a crocodile approaching, just kick it.” Yes, I’m sure that’s gonna work. 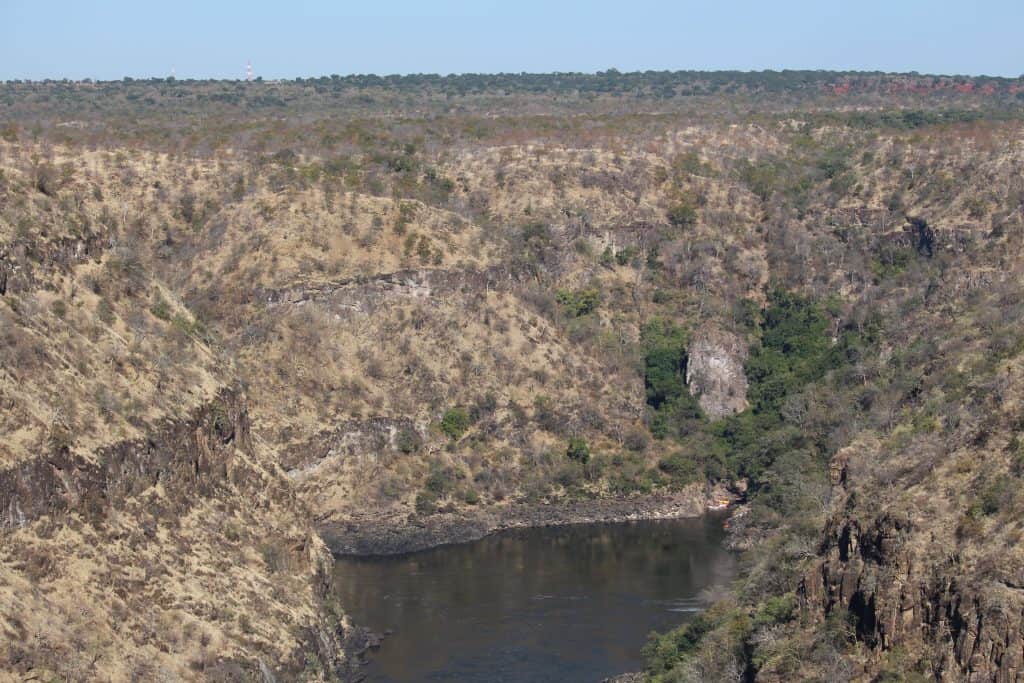 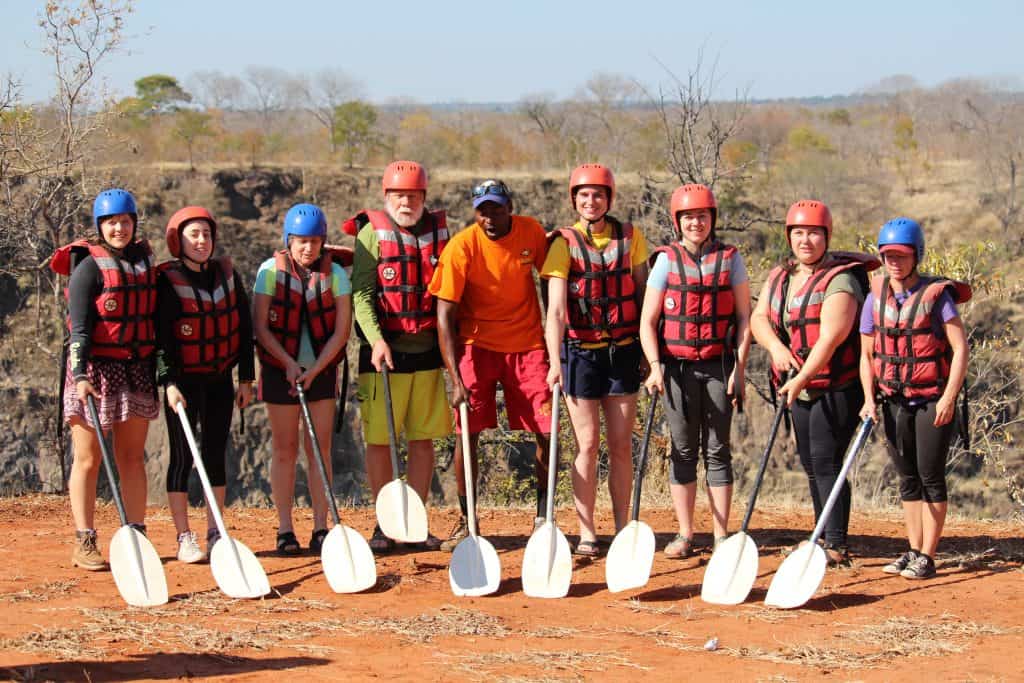 Surprisingly, the worst part came before the rafting even started

To get to the water we first had to face the walk down the cliff, because the car can’t get down there. I didn’t have a watch with me, but I guess it must have taken about 20 to 30 minutes to get down. It felt much longer.

The path was steep, and for the most part consisted of a make-shift ladder. It was made of thick branches spread over the floor that you had to balance on. They were uneven, sometimes loose, and there was no hand railing or anything to hold on to. If you were lucky you might get a guide to help you and hold your hand for balance. If not, like me, you had to use you paddle as a kind of walking stick. On the steepest bits, I gave up and climbed downward on all fours.

This unexpected climb had two advantages though. One, you had to concentrate so hard to make it down in one piece that you forgot to worry about the rafting itself. After all, if you survived this climb, how much worse could it get? And two, we all arrived at the river sweating like crazy, and the cold water suddenly seemed a lot more inviting. 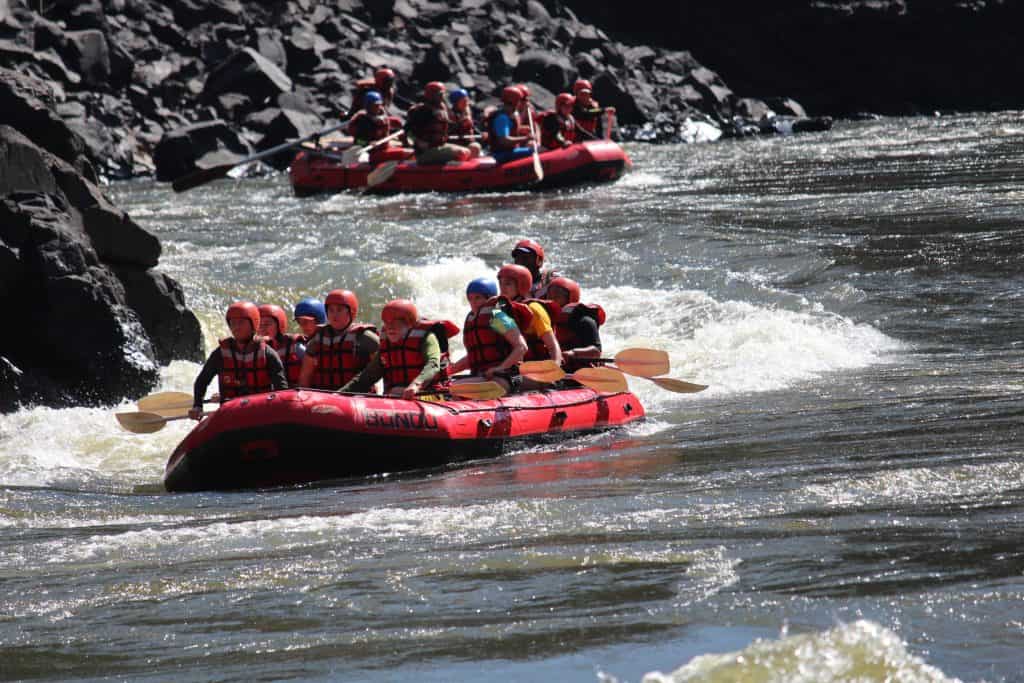 There were six of us, and we shared a boat with two more people from another group. And of course there was our guide Stanley, or “Stan the Man” as he liked to be called. He gave us our last bit of instructions, and then we left the shore to be immediately taken by the first rapid.

That first one was by far the worst. This wasn’t the strongest that we were going to face, and already it almost capsized us. We were all holding on for dear life (or so it felt)!

After that experience I was about ready to give up. This had only been a level 4, and we would encounter several more of those plus a level 5 rapid on this trip. I really wasn’t sure if I could take that. But of course, by now there was no turning back.

Stanley took a more practical approach to the whole thing and explained that we had simply been too slow, and next time we’d have to paddle harder when he told us to. None of us wanted to repeat the experience of this first rapid, so we took his advice to heart. 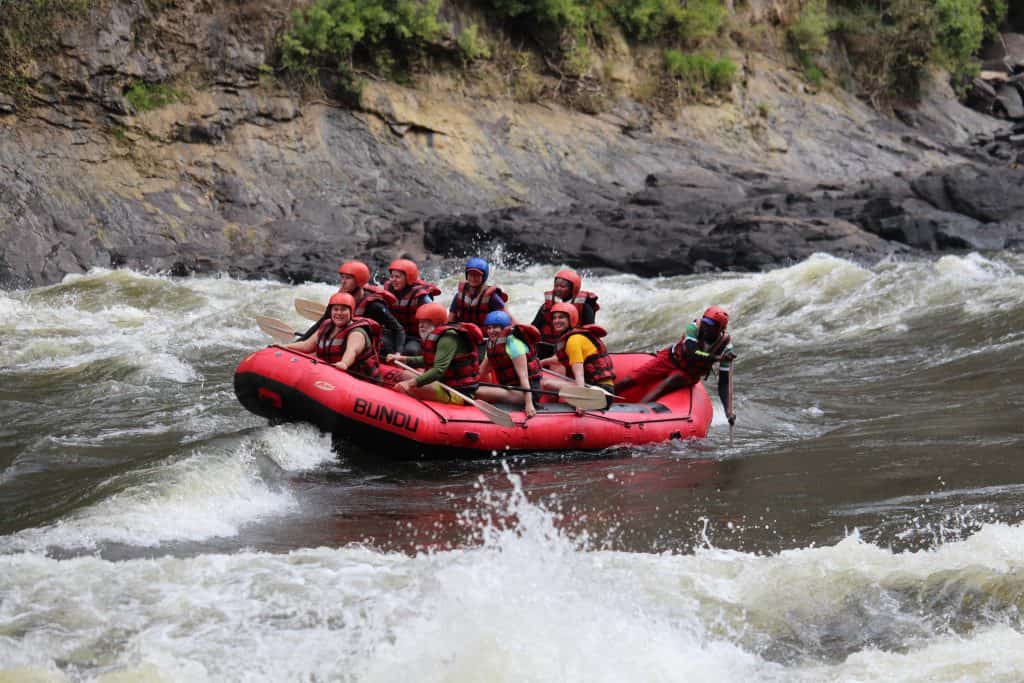 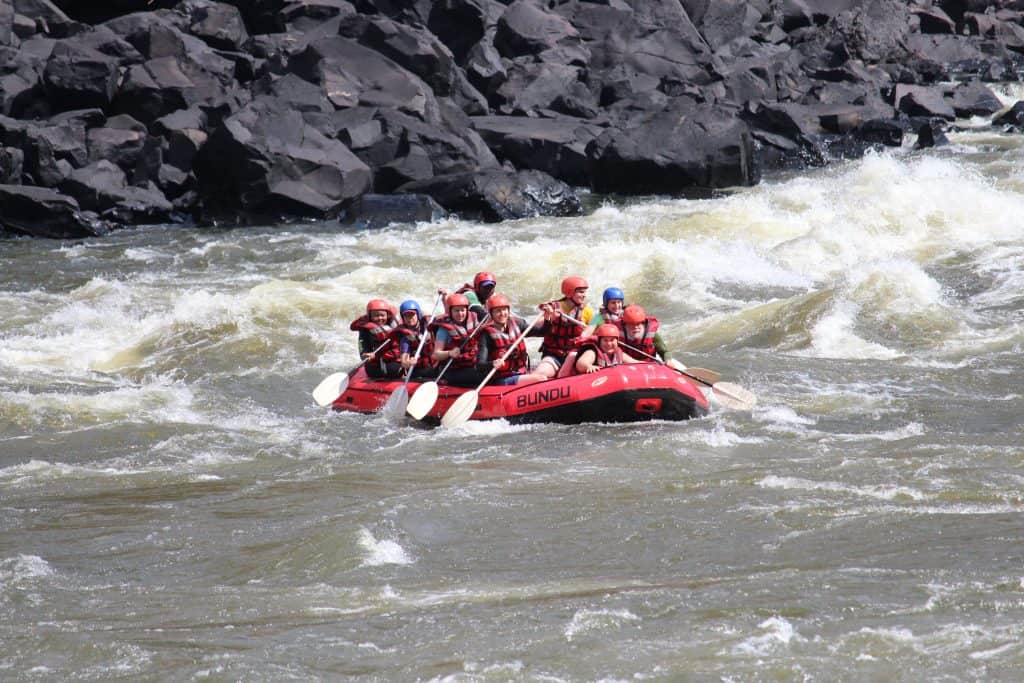 The most miraculous thing happened: it became fun!

Stan’s advice worked! From that moment on, we took every rapid with ease. Of the three Bundu rafts out that morning, we were the only one that never went under or lost anyone. Not even in the level 5 rapid, where both other boats capsized. We always ended up collecting passengers of the other rafts out of the water, while never losing one ourselves.

And what was much more surprising: it suddenly became fun! After a couple of rapids the fear was gone, and we all enjoyed ourselves more than I would have thought possible. We conquered rapids with such telling names as Terminator (that’s the level 5 one), Oblivion, Washing Machine or the 3 Ugly Sisters, and I suddenly caught myself wishing the next rapid would be a big one, and not just a harmless level 1 or 2. Who would have thought that when we started?

In between the rapids there were often longer stretches of calm water, where we could put paddles and helmets aside and just enjoy the view of the canyons. Stan pointed out some of the landmarks along the way. And even seeing a little crocodile sunbathing on the shore wasn’t enough to bring my panic back. 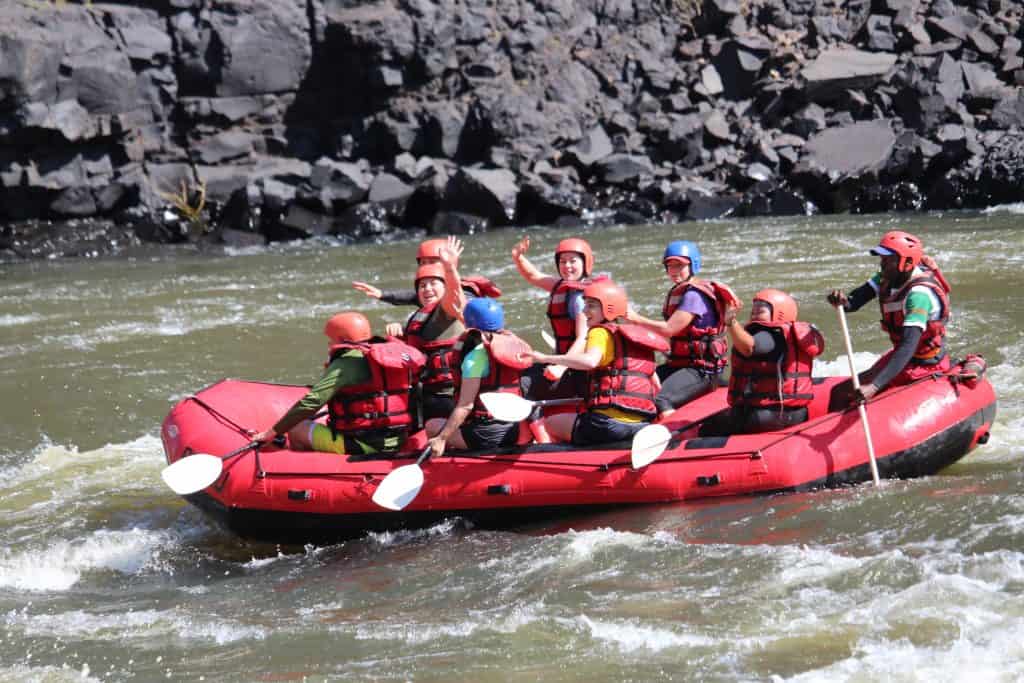 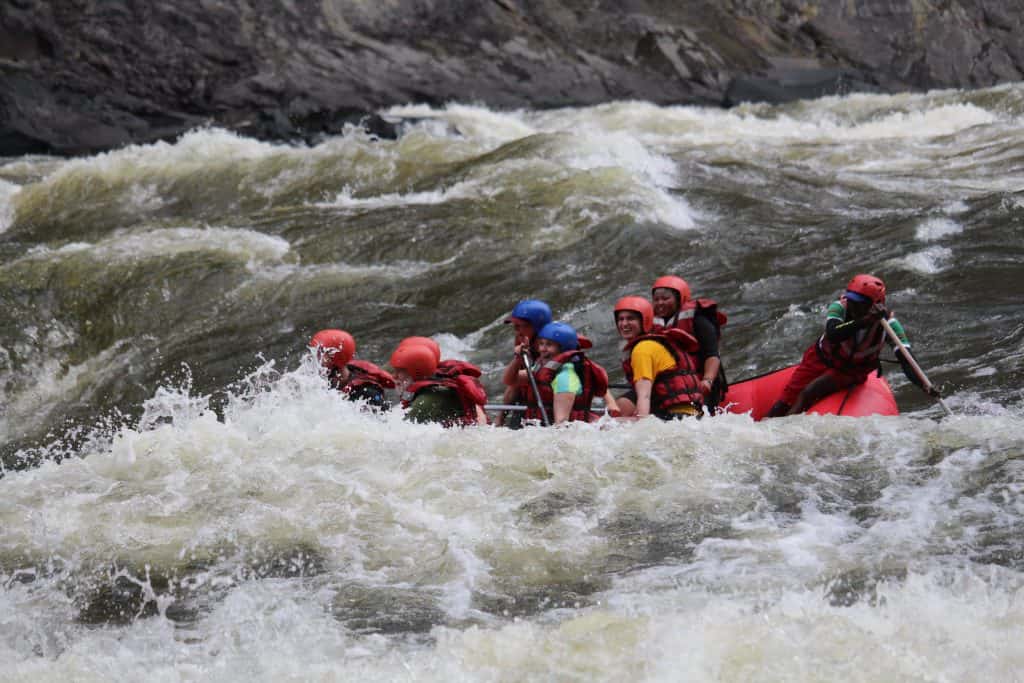 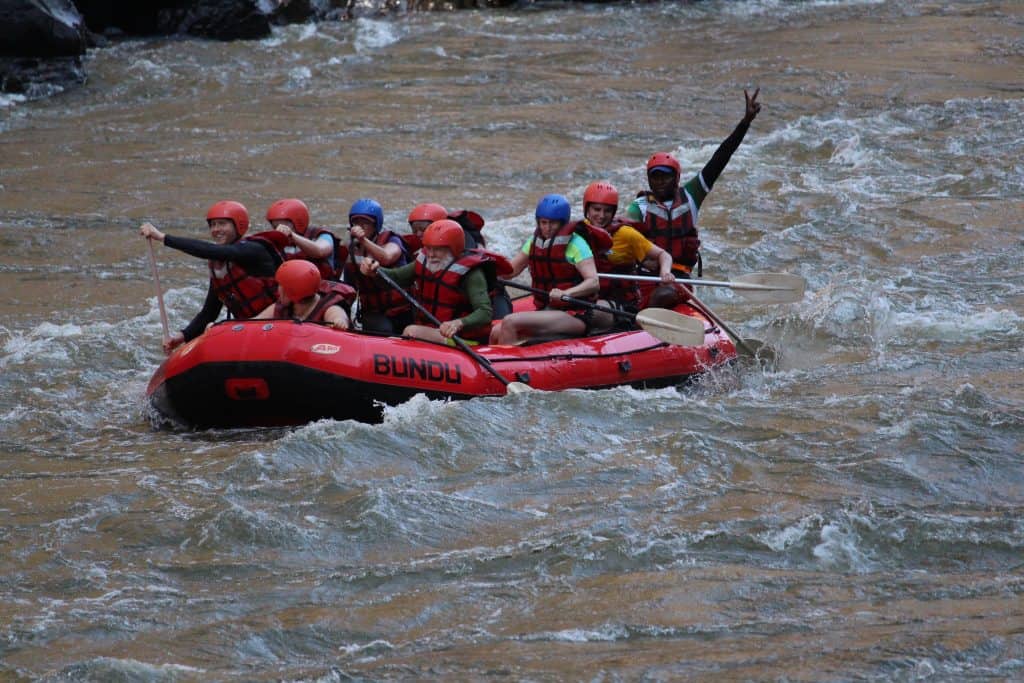 Getting into the paddling! We didn’t know it yet, but we would have sore muscles for days to come… // Photo: Bundu Adventures

Back on solid ground

Eventually we made it through the last rapid and reached our destination. To our relief we didn’t have to walk back up the cliff, but got to go in a little cable car. Although it didn’t look very trustworthy. We all made jokes about probably dying in there. Which would have been a shame, given we just mastered the rafting so successfully.

But we did make it to the top, and then returned to the Bundu office at the Gemstones restaurant, where a big lunch awaited us. Which was the perfect end to this adventure, because I was starving by now! 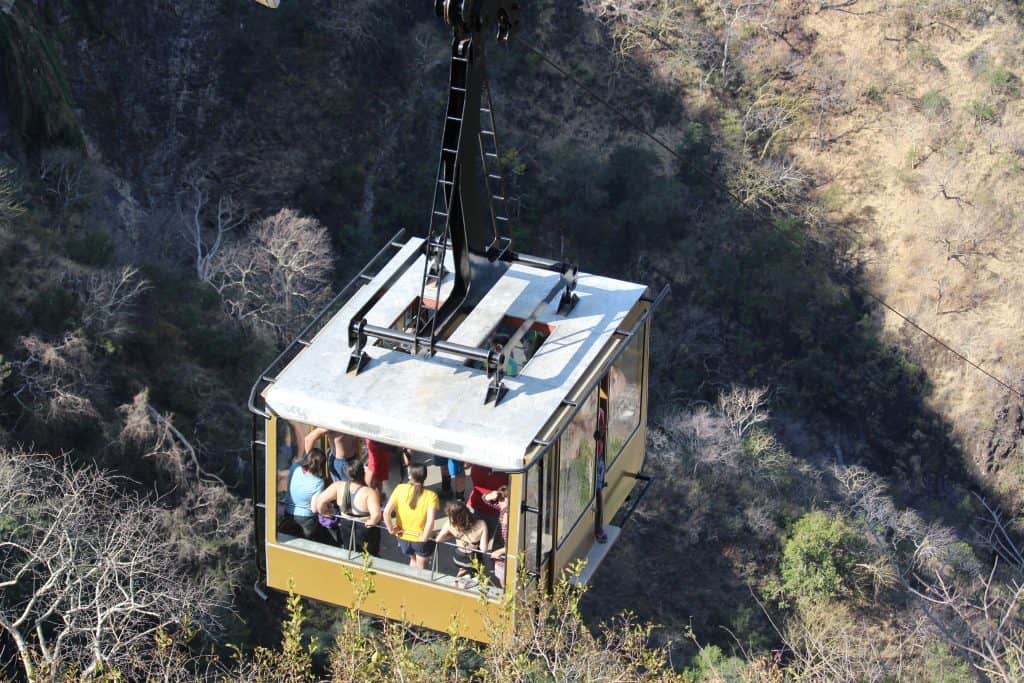 I didn’t want to do it at all when we set out for the day. Now I can’t wait to do it again! Thanks to Bundu Adventures for making this experience possible, and for my friends for booking it for me without giving me the chance to say no. Sometimes, you really need a bit of a push to leave your comfort zone, and it turned into one of the most exciting days of my Africa trip! 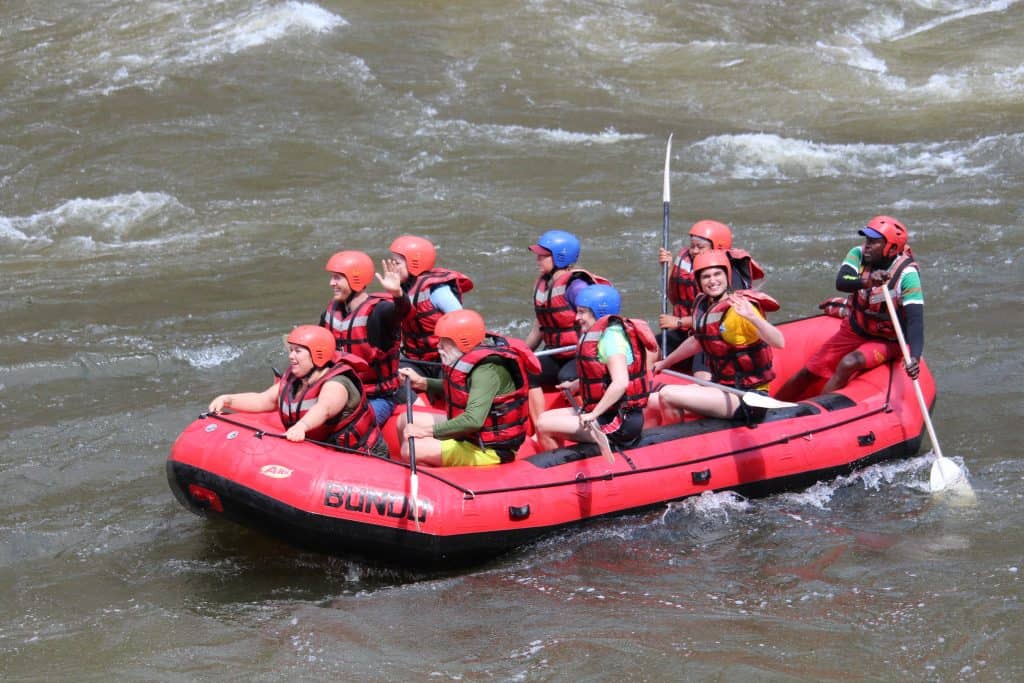 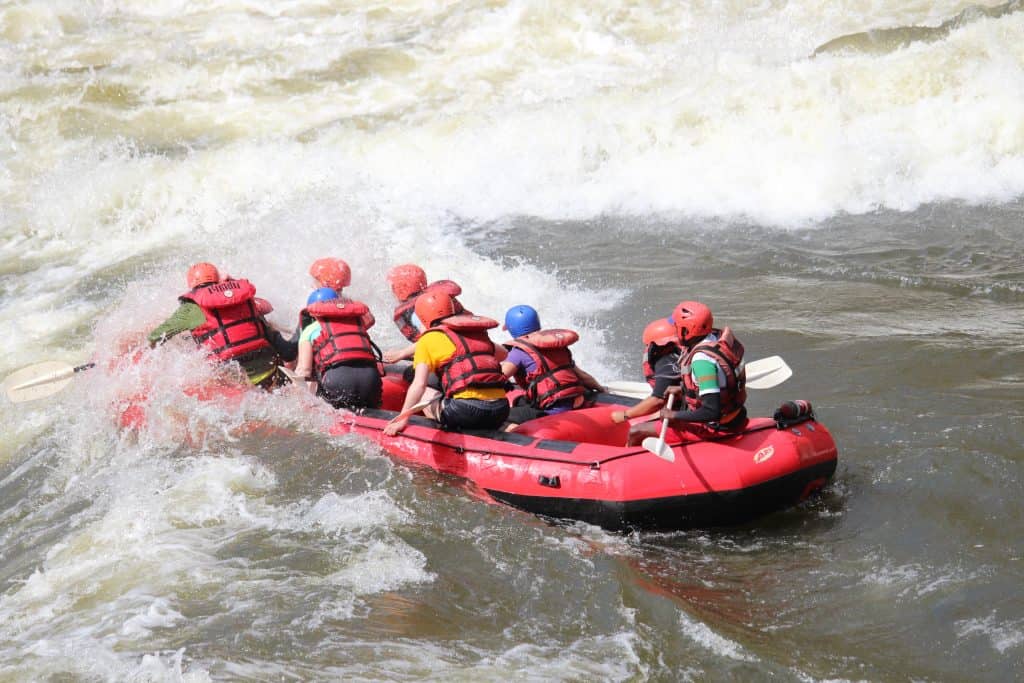 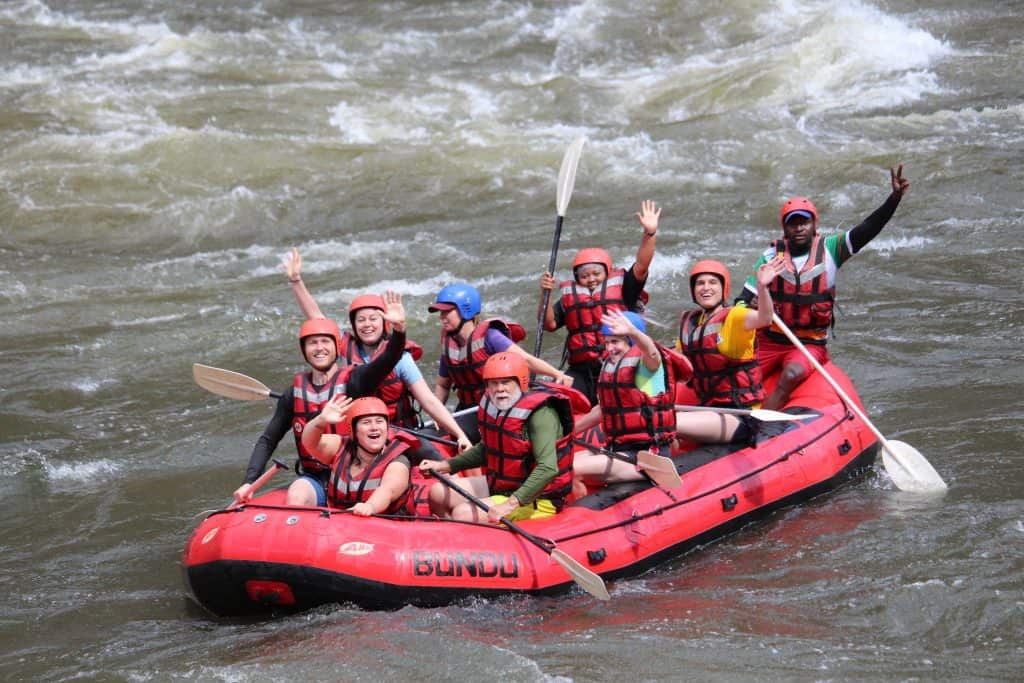 Have you been white water rafting? Would you want to? Share your experiences in the comments! 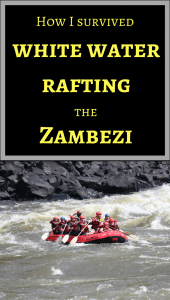