Warning: Parameter 2 to wp_hide_post_Public::query_posts_join() expected to be a reference, value given in /home/customer/www/globalintrovert.com/public_html/wp-includes/class-wp-hook.php on line 292
 One short week on the Emerald Isle • Global Introvert Skip to content

One short week on the Emerald Isle

Northern Ireland was beckoning me last summer, or to be more precise: Belfast was calling. That call happened in the person of an Aussie friend who was visiting university there for one semester. I didn’t want to miss the chance of seeing him while he was in Europe.

When I told people about my travel plans the most common reaction was a shocked “Why Belfast?” This includes people who have been visiting or even living there. For some reason, Belfast doesn’t seem to have a reputation of being very interesting for tourists. I had six days to find out if that reputation was deserved! 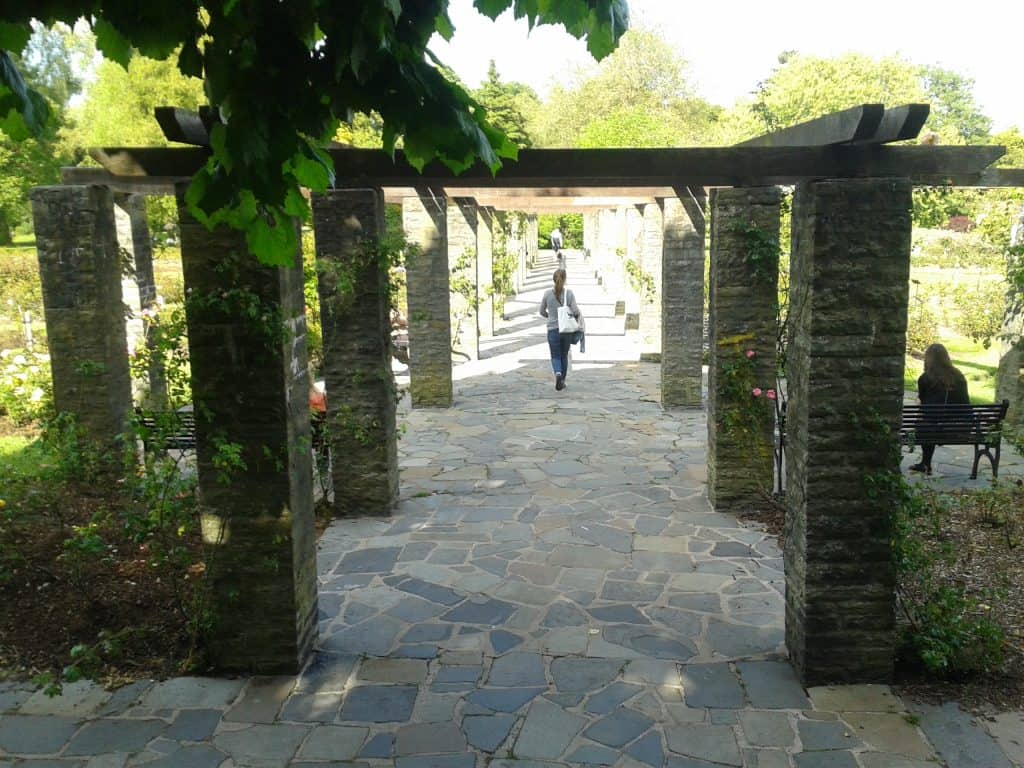 The day I arrived, my friend happened to be at a job that only came up very last-minute. In fact, he only told me about it the night before my flight. So we had to cancel the plans for him to come and pick me up. Instead, I was left on my own devices with a description of how to get to his house, and where to find the key he had left for me. Miraculously I found everything without getting lost along the way. After dropping off my things I had an afternoon on my own to get acquainted with the city. As I was in the university quarter, I had a look at Queen’s University first. After that, I settled in at the park and soaked up the sun. Time to relax and get into the holiday mood!

From the next day on my host was free and could show me around Belfast. What’s more practical than having your own personal guide? As the city isn’t all that big, we could go everywhere on foot – my favourite way of exploring! I think Belfast’s small size may be one of the reasons that it is not such a famous tourist destination. The few attractions it offers can be covered rather quickly. On the other hand, I found that cities which are somewhat less exciting on a size and number-of-attractions scale often make up for it by being the more relaxed and feel-good ones. They give you the time to enjoy yourself without having to rush from one famous site to the next. 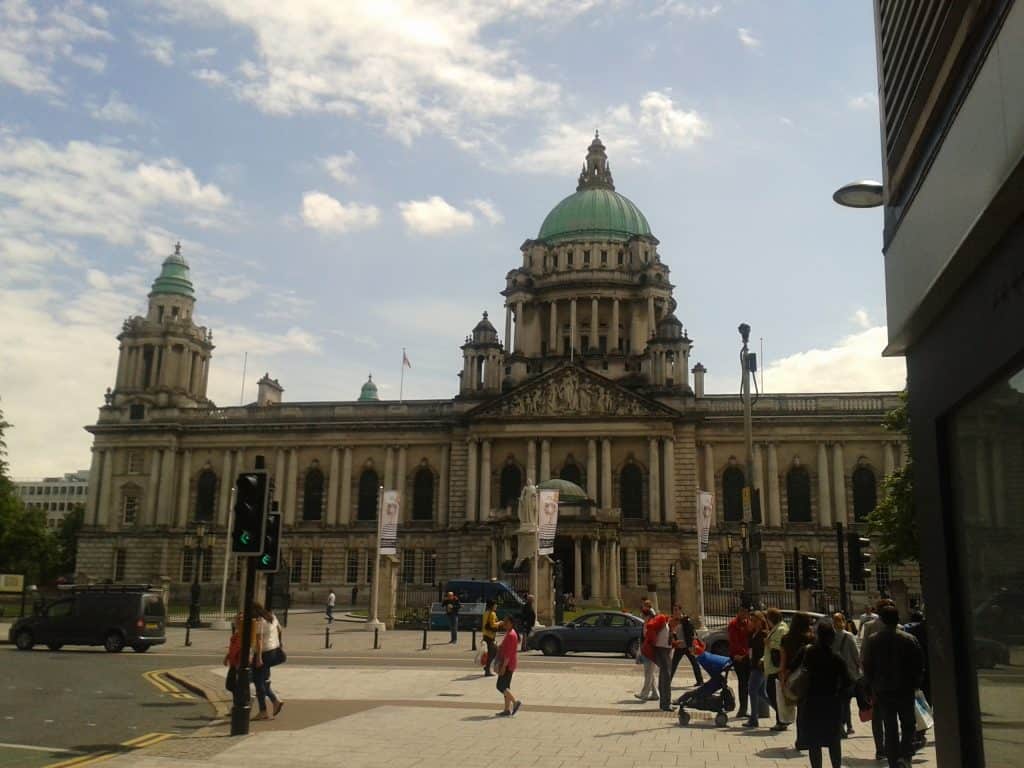 Of those attractions Belfast does have, one that’s well worth seeing is the Titanic Museum. It’s on the docks where they built the Titanic. It tells you everything you might ever have wanted to know about that ship and its history. From how it was built, to exhibitions of the cabins on board, to passenger lists, to a skilful recreation of its final distress calls. Of course, the film with Leo and Kate also gets a mention, among other works of art inspired by the story. 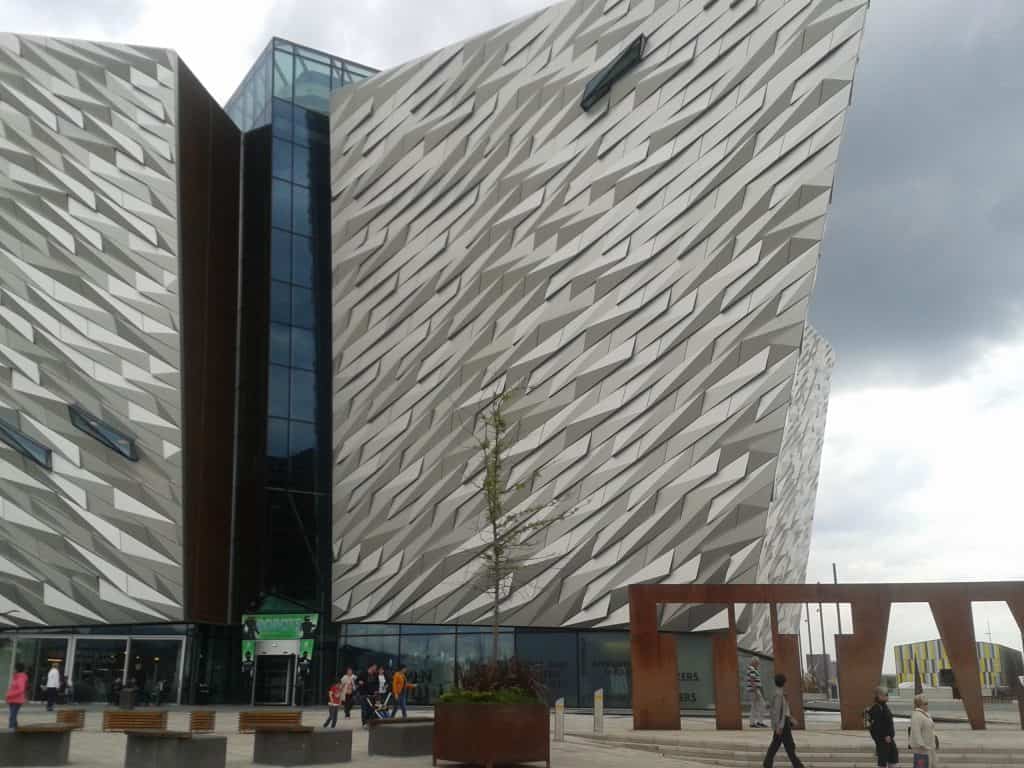 A day-trip to Dublin

As this was my first time in Ireland, I was more than happy to not limit myself to Belfast only. So off we went to Dublin. Arriving in the early afternoon we started off with lunch in the park, enjoying the sunshine. Then we wandered past the Trinity College and Trinity Church to the Guinness Storehouse. Here you not only learn to pour your own perfect Guinness but also get to drink some free beer in the process. 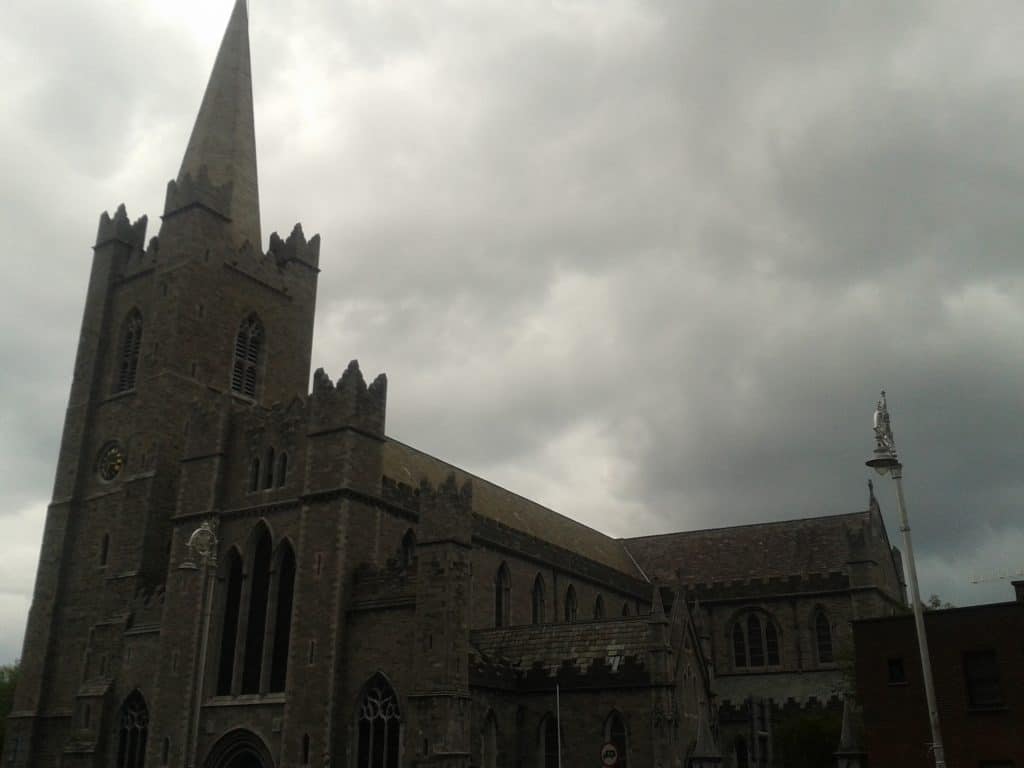 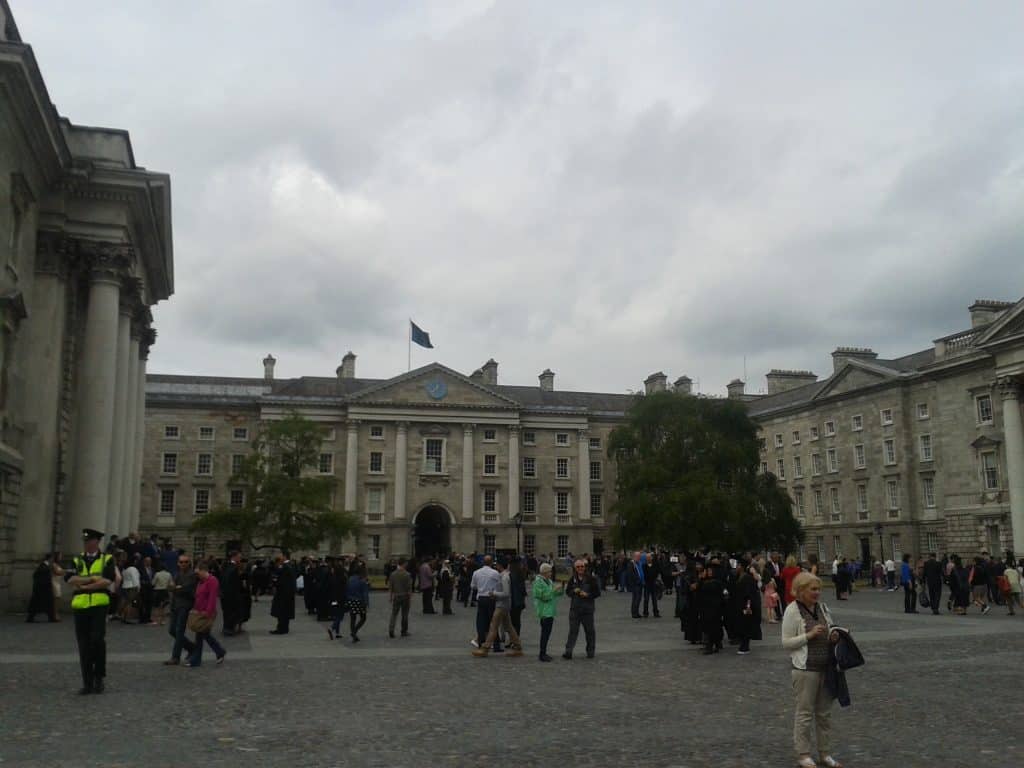 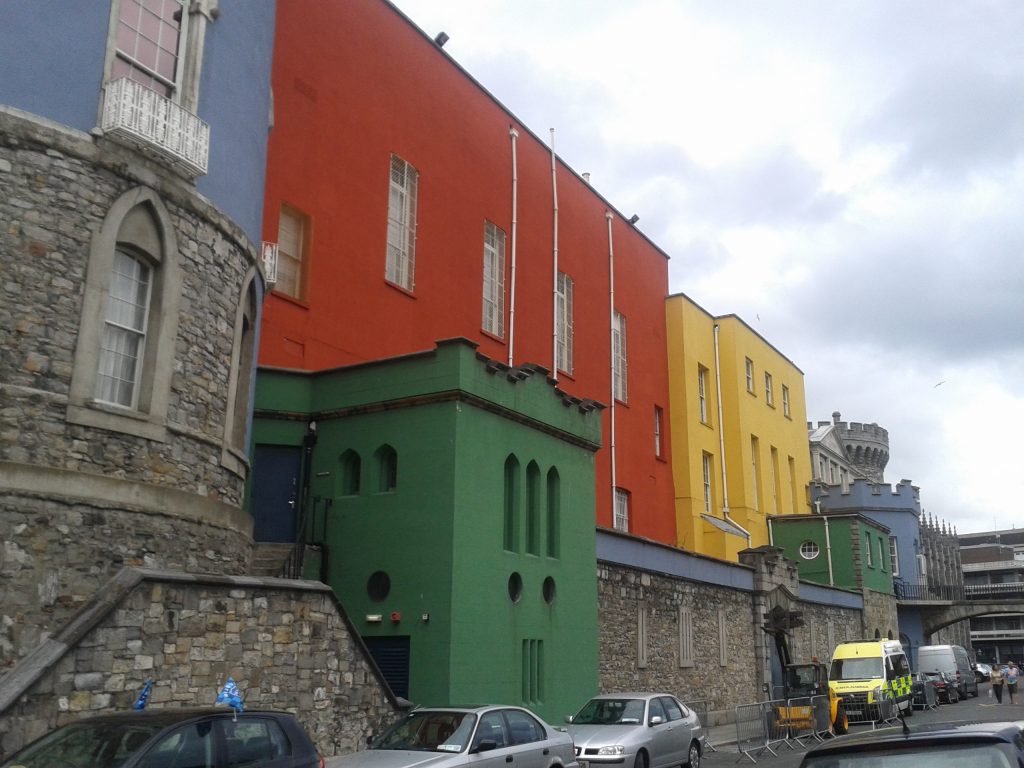 The next morning, before heading back on the bus to Belfast, we came across a Leprechaun Museum and on the spur of the moment decided to go inside. There’s a small exhibition leading visitors from the realm of the giants (where everything is four times bigger) to the leprechaun realm (where everything is four times smaller), through a fairy cave and then following the rainbow to a pot of gold. It was a fun experience, and for very little money. Don’t you just love to come across unexpected highlights like that? 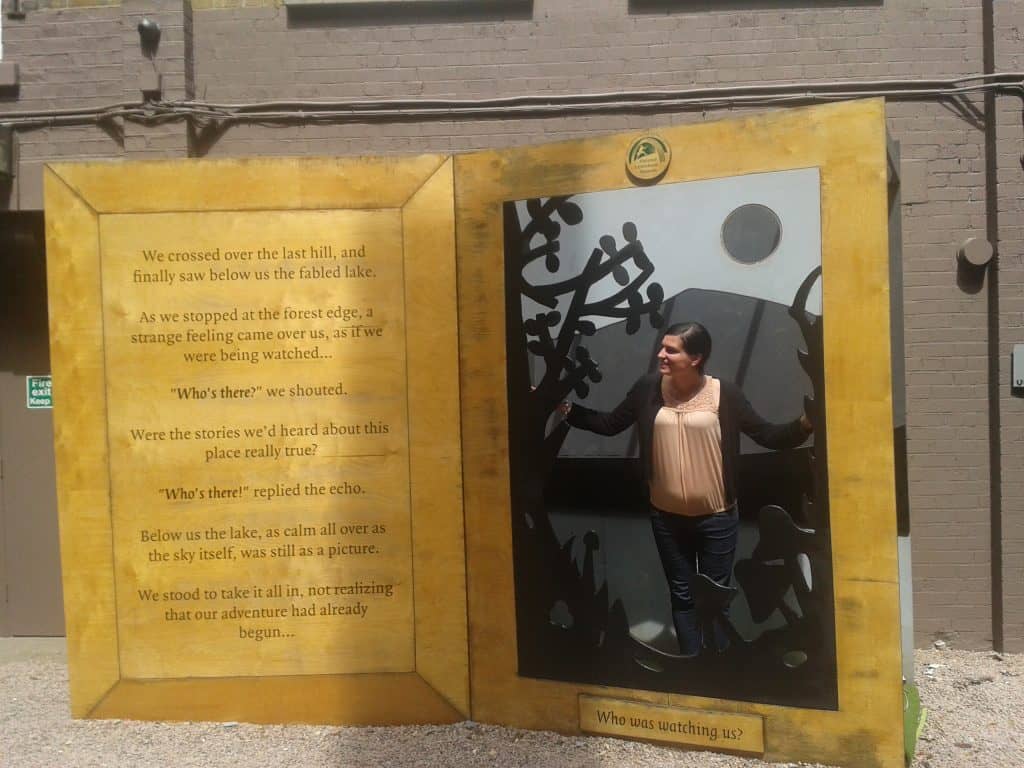 Back in Northern Ireland, we took a day tour to the Giant’s Causeway. The first stop before that, though, was at a whiskey distillery, with a free shot of Irish whiskey. I would like to sound like an expert now and tell you how good it was, but unfortunately, we had been running late that morning and only just caught the bus without time for breakfast. By the time we arrived at the distillery I was much more interested in the food offerings at their little cafe than their whiskey.

Finally having gotten something into my belly, I was able to enjoy the drive along coastal highways, past ruined castles and rocky cliffs. This way I got a small glimpse of the Irish countryside, before arriving at one of the natural wonders of Ireland. We got time to explore the surroundings and walk around the causeway and the path along the rocks. Isn’t it spectacular? 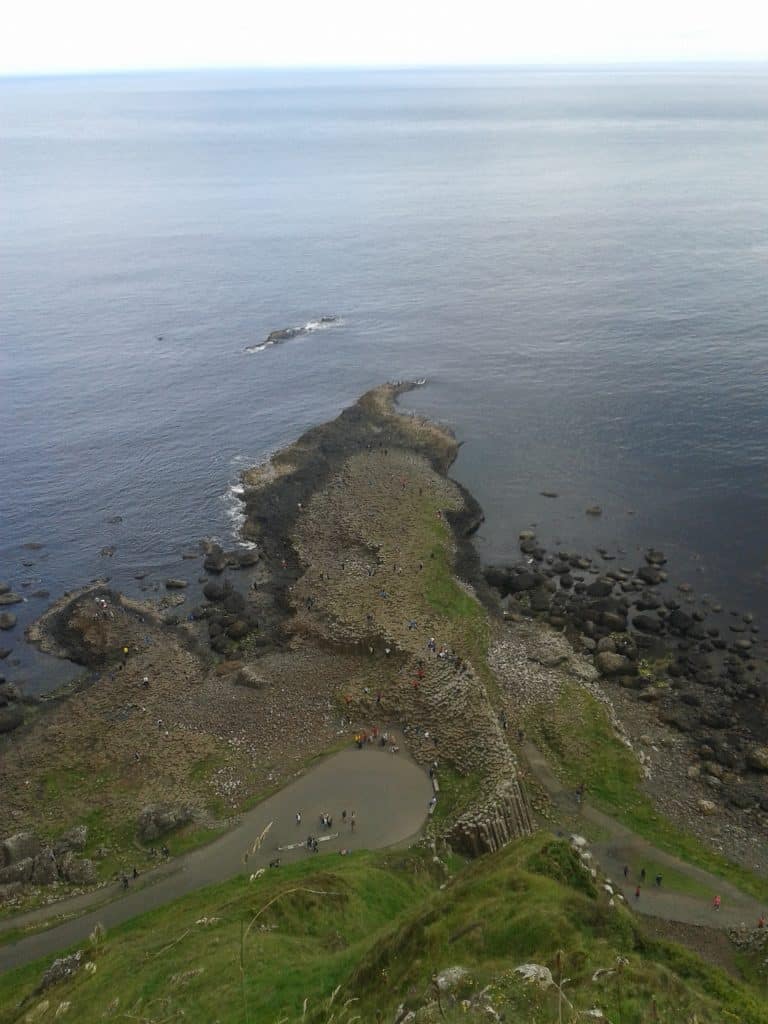 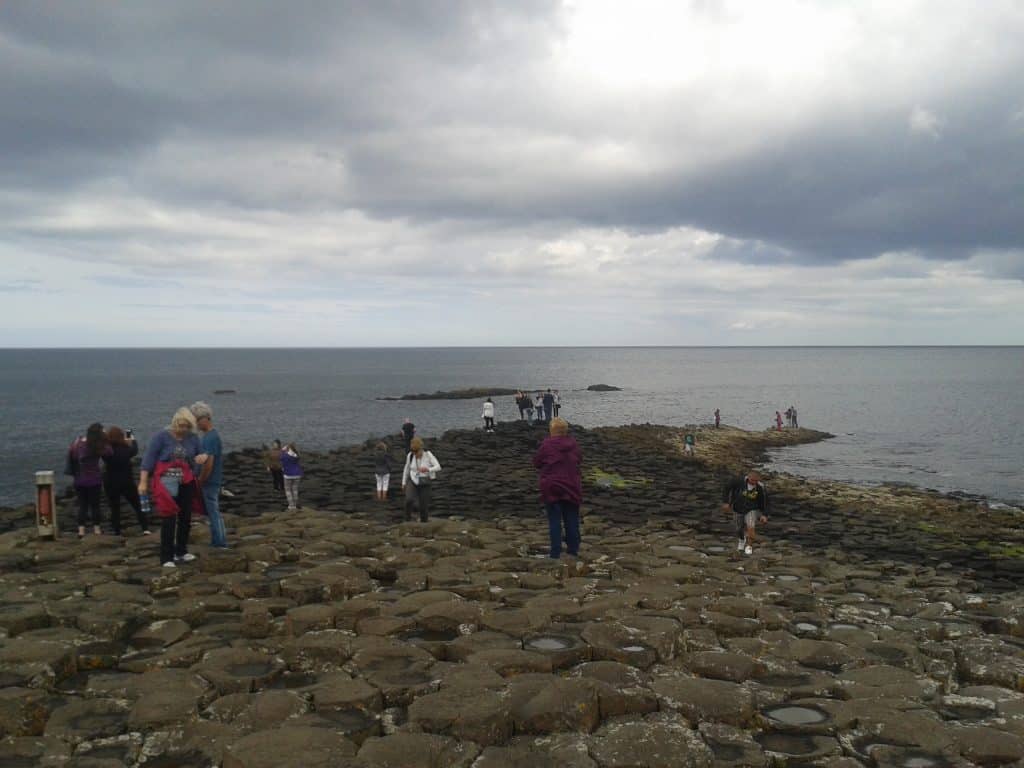 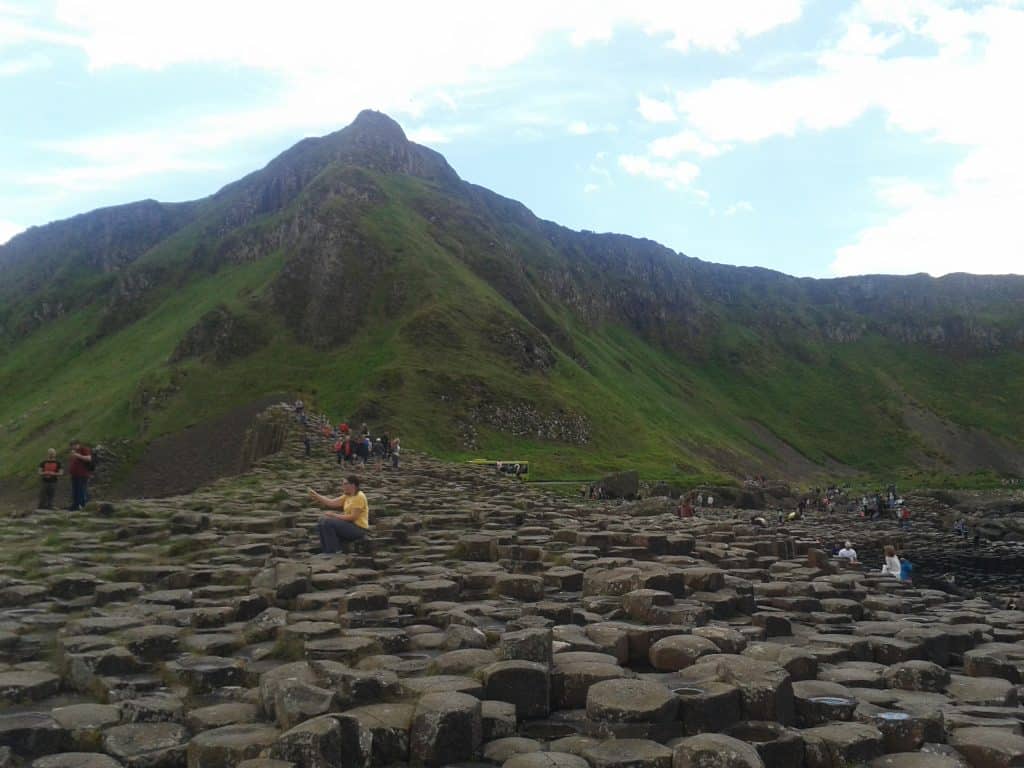 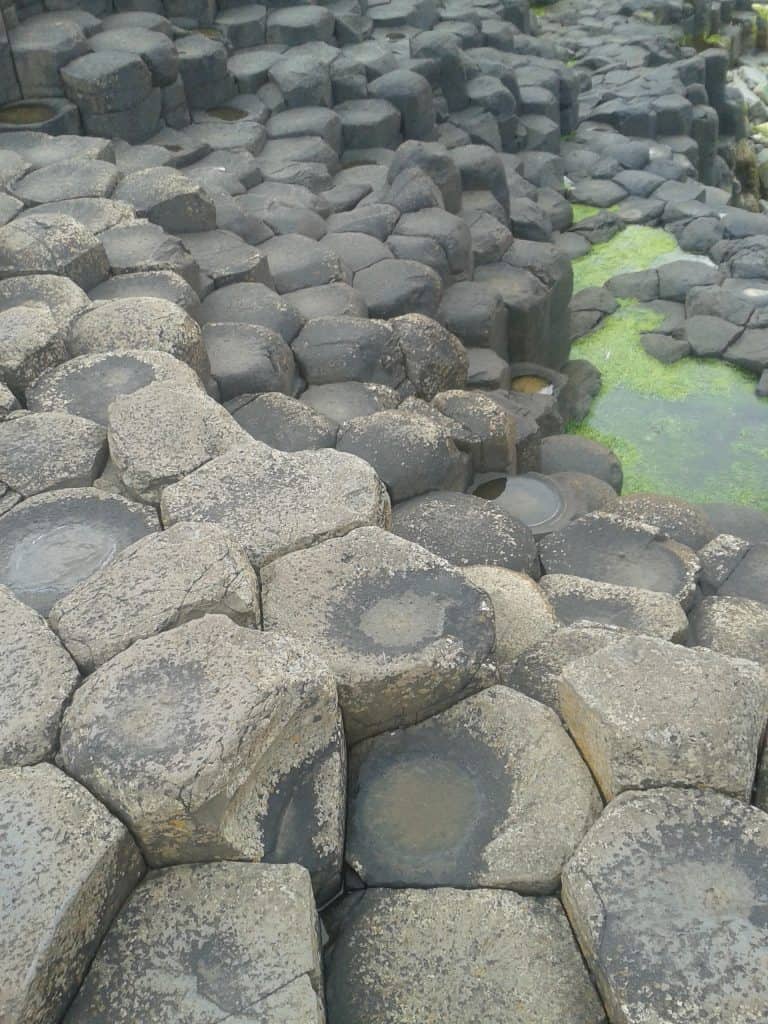 Last stop of the day was the Carrick-a-Rede Rope Bridge that connects the mainland with the tiny island of Carrickarede. It’s high above the rocks and looks so breath-taking on the photos I saw, I was secretly worried if I would dare to cross it. But it turned out to look a lot smaller in real life and much less scary, so walking over it was no problem. And there’s no need to be disappointed by the lack of adrenaline. It’s a beautiful spot giving way to magnificent views of the coast. You can even see Scotland from here! 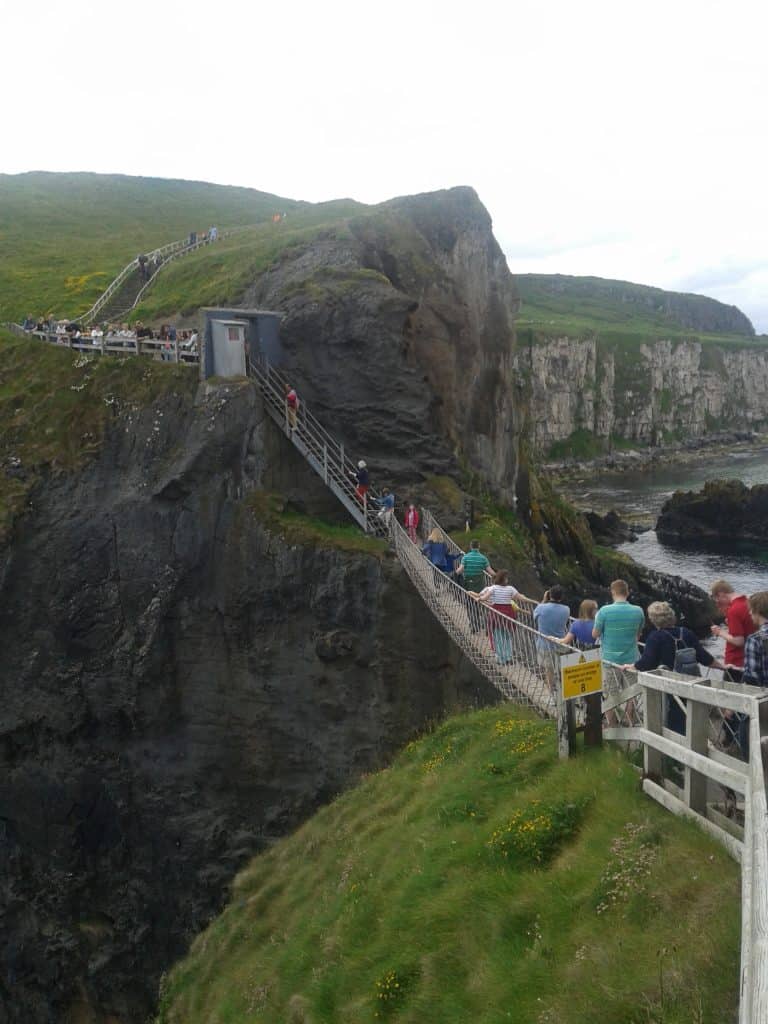 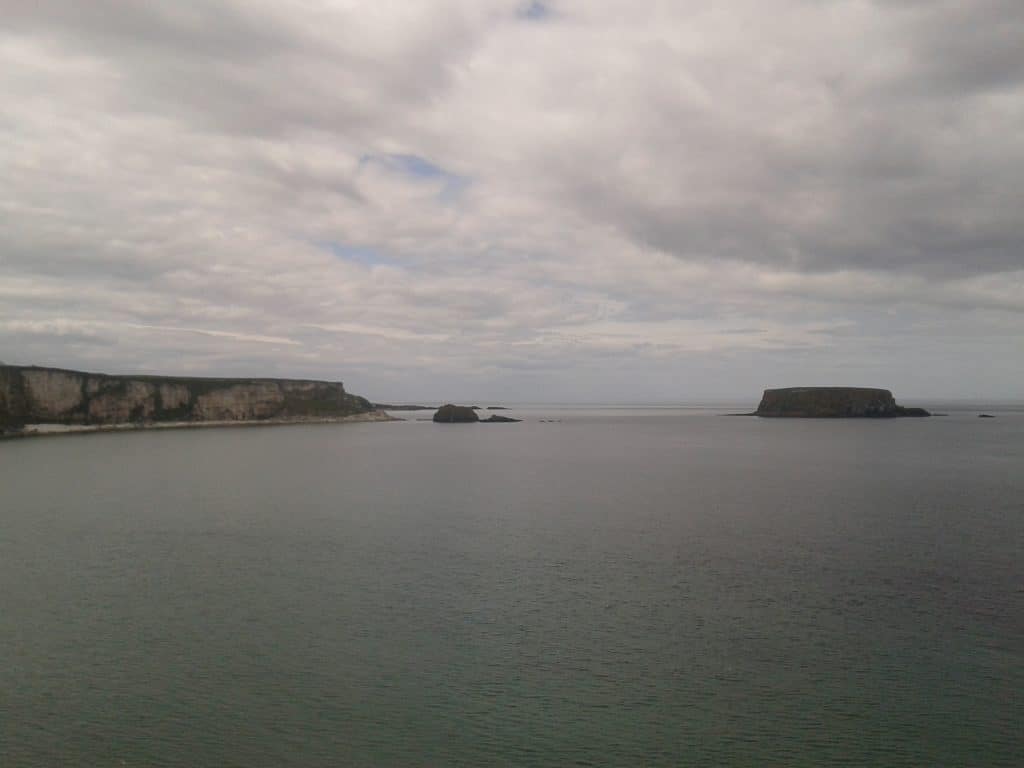 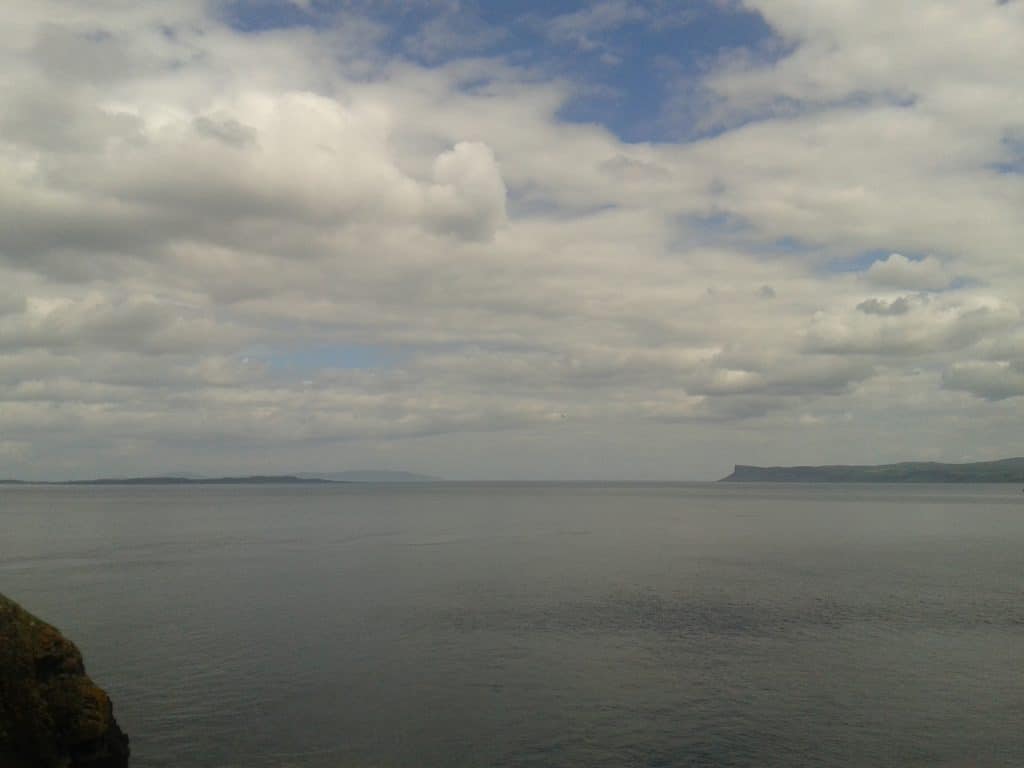 Overall we made the best we could of the few days I had in Northern Ireland. My impression of Belfast was that of a calm, easy-going town with a big student population and vibrant nightlife. Of course, I was mostly hanging out with a student, so maybe that had an impact? Either way, one week is far too short to spend on the island. I felt it had so much more to offer than I could cover in the time I had, and to be seeing those few parts of it only spurred the wish to see more! 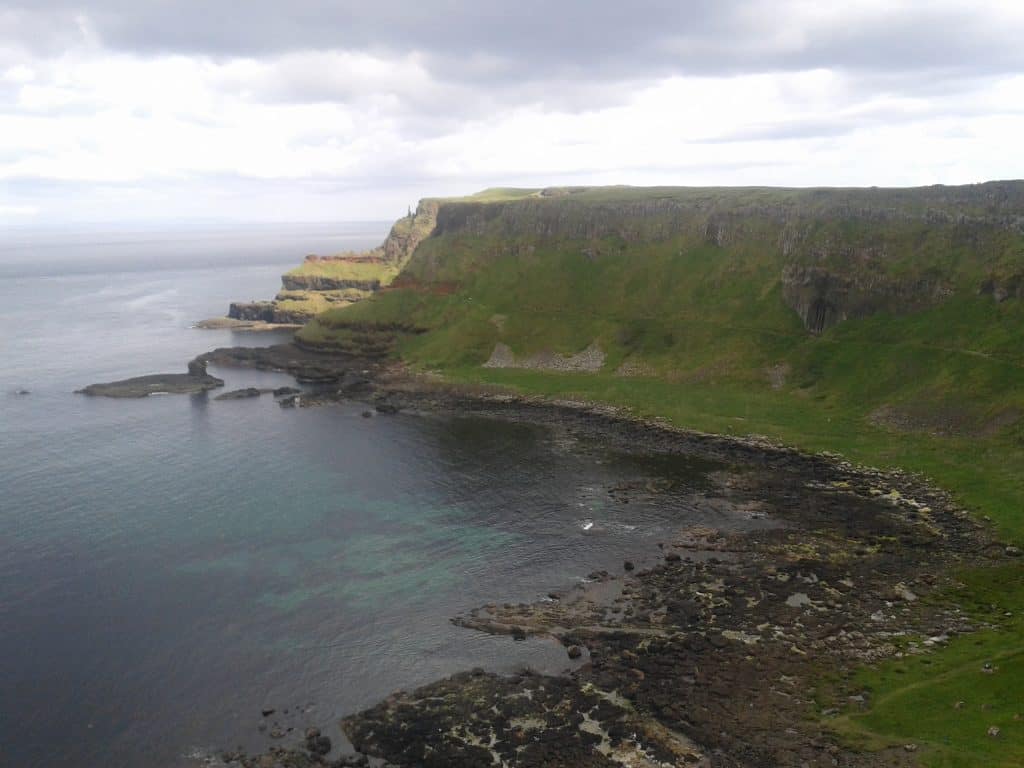 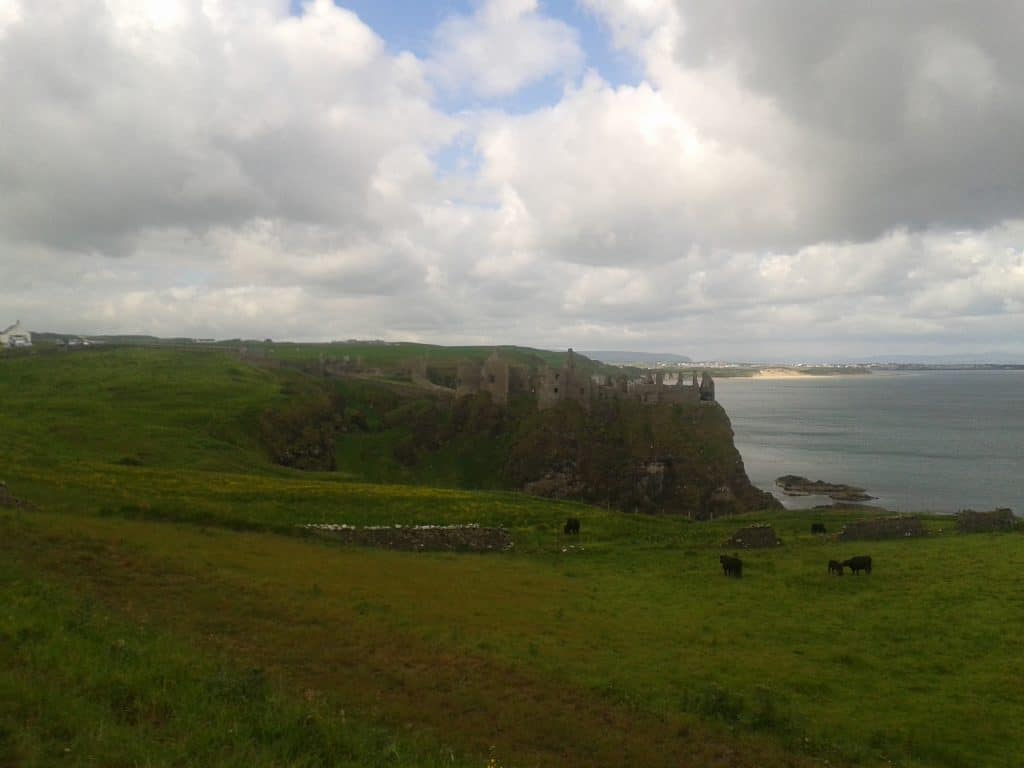 Have you been to Northern Ireland? Any recommendations of what parts of the country I should visit next? Share in the comments! 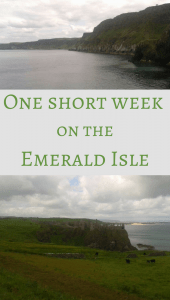