Warning: Parameter 2 to wp_hide_post_Public::query_posts_join() expected to be a reference, value given in /home/customer/www/globalintrovert.com/public_html/wp-includes/class-wp-hook.php on line 292
 My introvert travel guide to Easter Island • Global Introvert Skip to content

When talking about introvert-suited travel destinations, most people name places that are secluded, only have a limited number of people to allow for plenty of alone-time and impress you with plenty of breathtaking nature. If this sounds like your dream holiday, you can’t do much better than Easter Island.

Officially part of Chile, it nevertheless takes several hours on a plane to get there from the mainland. Once you land on the tiny airfield, there’s nothing but water for a very long way in each direction. Talk about secluded.

It’s the perfect place to de-stress, get away from the hustle that is your everyday life, and simply enjoy the fact that you’re all alone in the middle of the ocean. Or at least, as alone as it gets with the town and the islanders around you. A little bit of civilized luxury doesn’t hurt, after all. 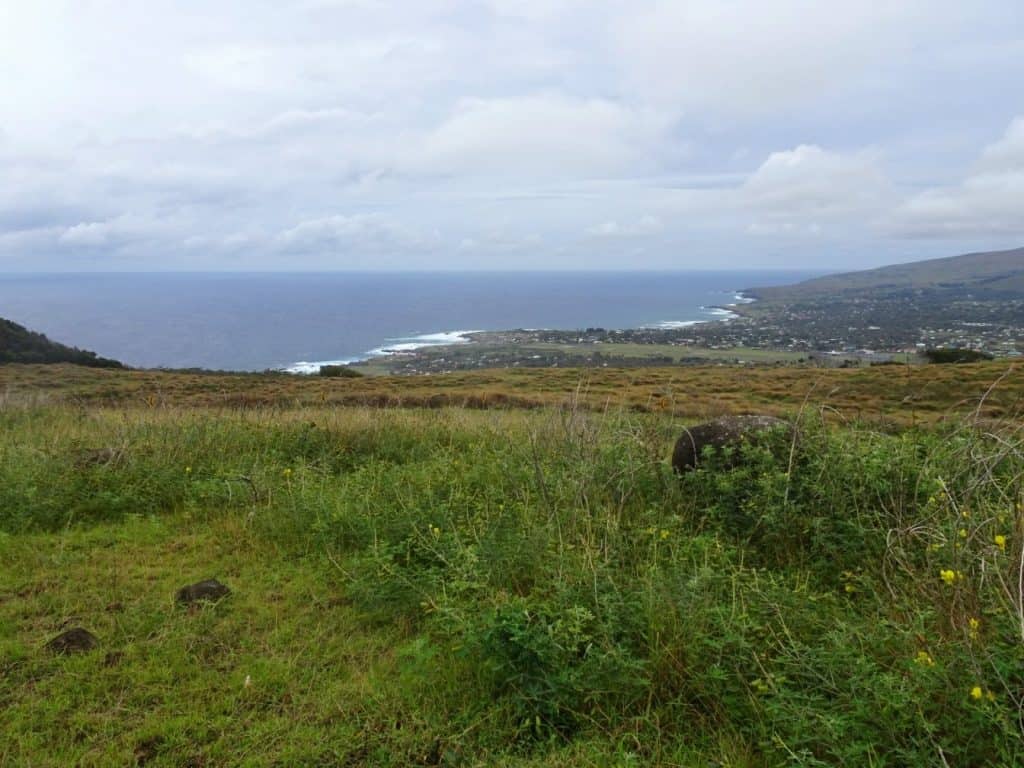 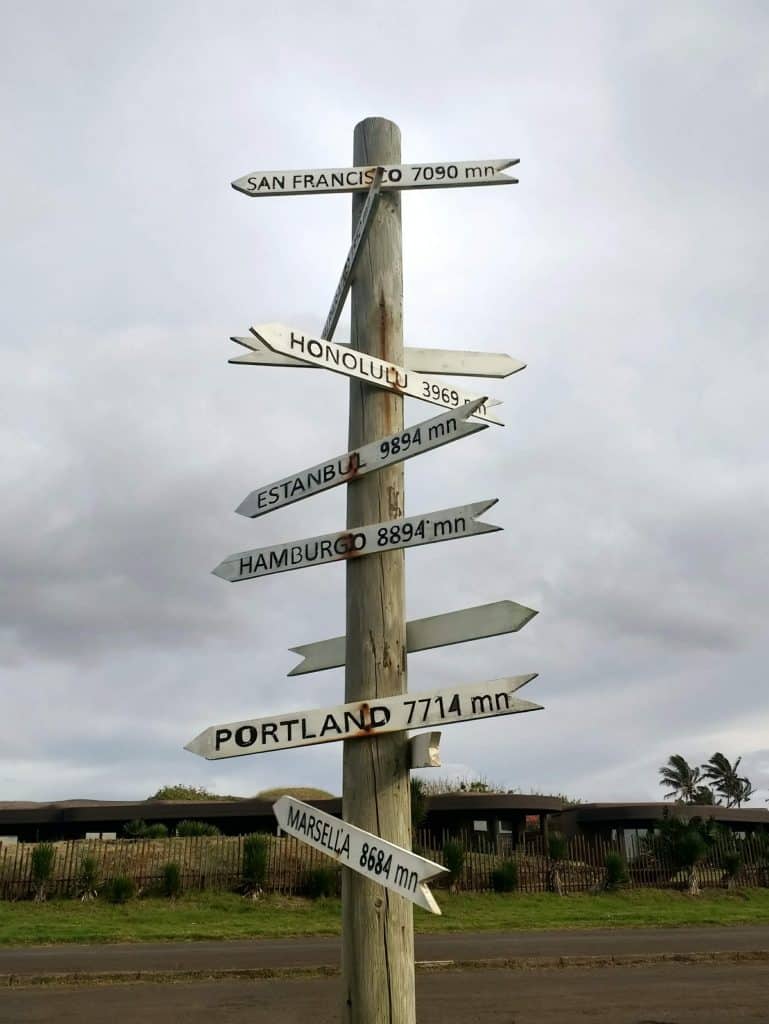 As small as Easter Island is, there’s still plenty to discover. There are several ways you can go about exploring Easter Island. You can rent a car or a bike, you can book a day tour, or you can walk. I personally found the latter option the most fulfilling – although I did also enjoy varying my routine now and then if I had a good reason. More on that later.

Everything that was in walking distance to Easter Island’s main town of Hanga Roa, I did on foot. That’s basically everything on the Western side of the island, including the impressive Rano Raku crater near Orongo village and the caves at Ana Kakenga. After walking past the entrance at first, as it’s only a tiny hole in the ground, I took all my courage together at climbed in. Never fear, once you got through the entrance it immediately gets lighter, because the cave opens to the ocean in the back, allowing for great views.

I didn’t do all of those excursions on my own, however. Some I did together with a guy I met at the hostel, who had arrived the same day. Luckily, he was also more the quiet type – I don’t think I could have endured someone who chatted constantly. However, some days, I enjoyed going out by myself. Although there are of course other tourists on Easter Island, it is not at all overrun, and I only met other people very sporadically. Most of the time, the only company were cows, horses or sheep. They roam the island more or less freely and can thus be encountered almost anywhere, including the middle of the street. I loved it! 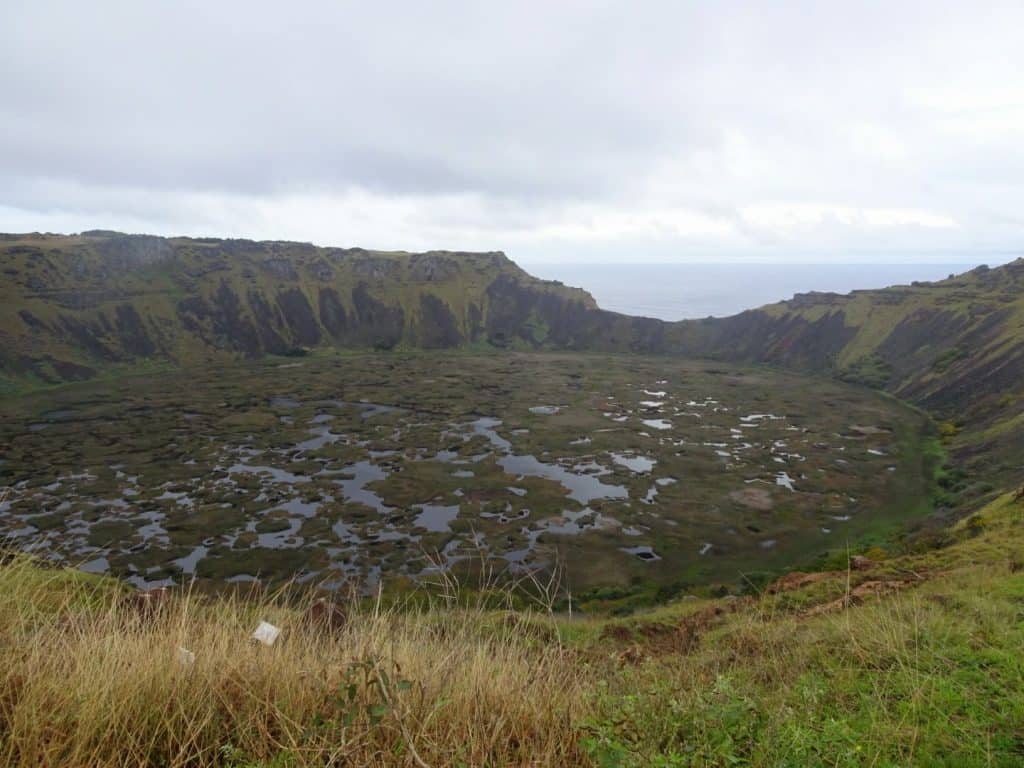 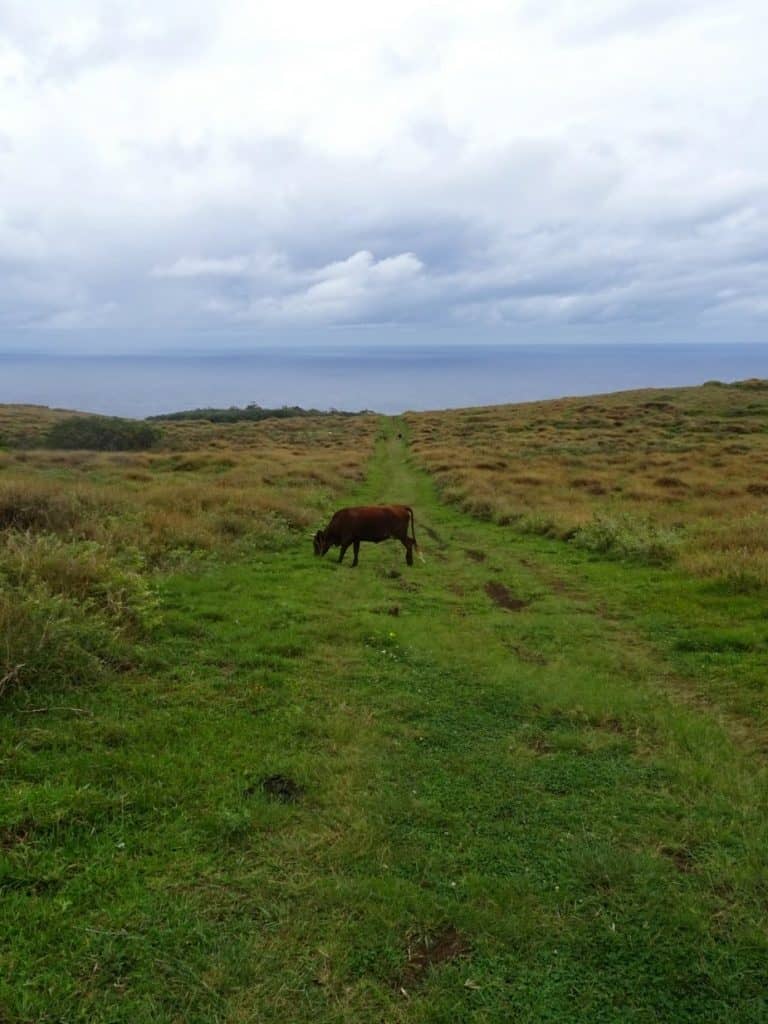 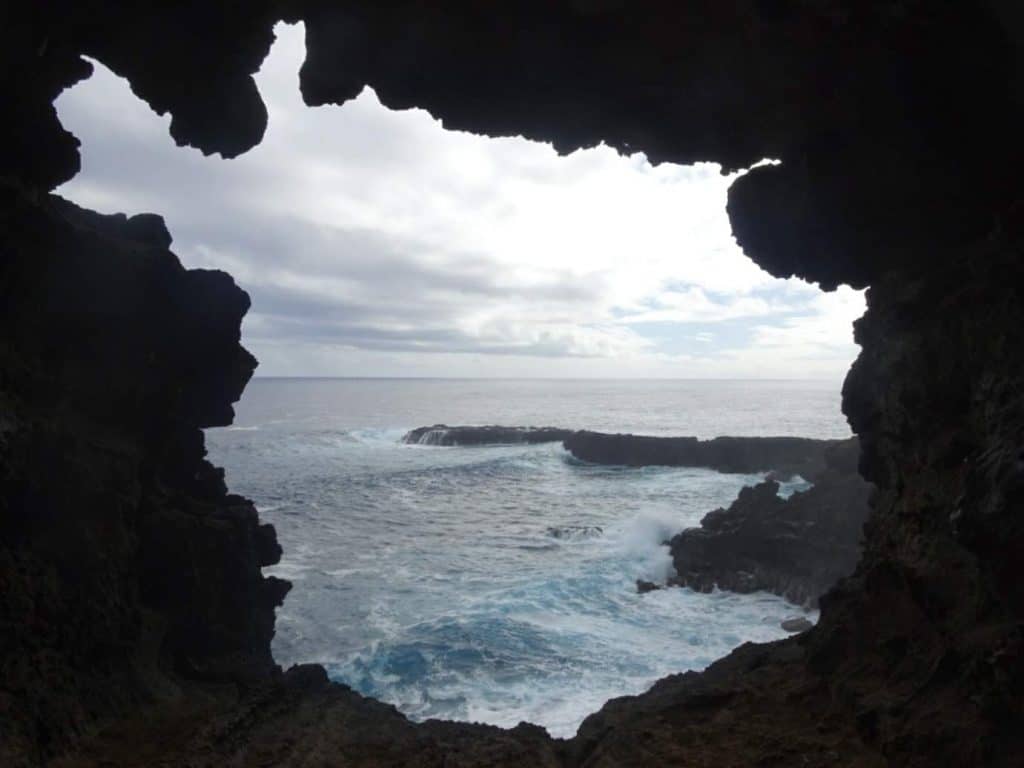 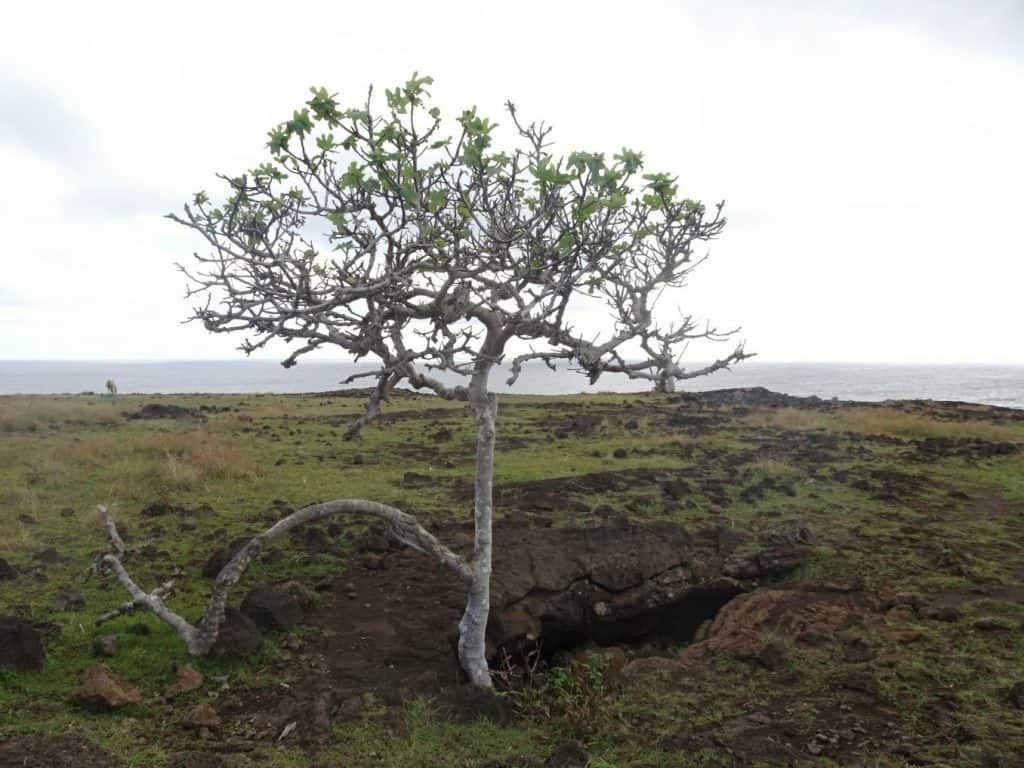 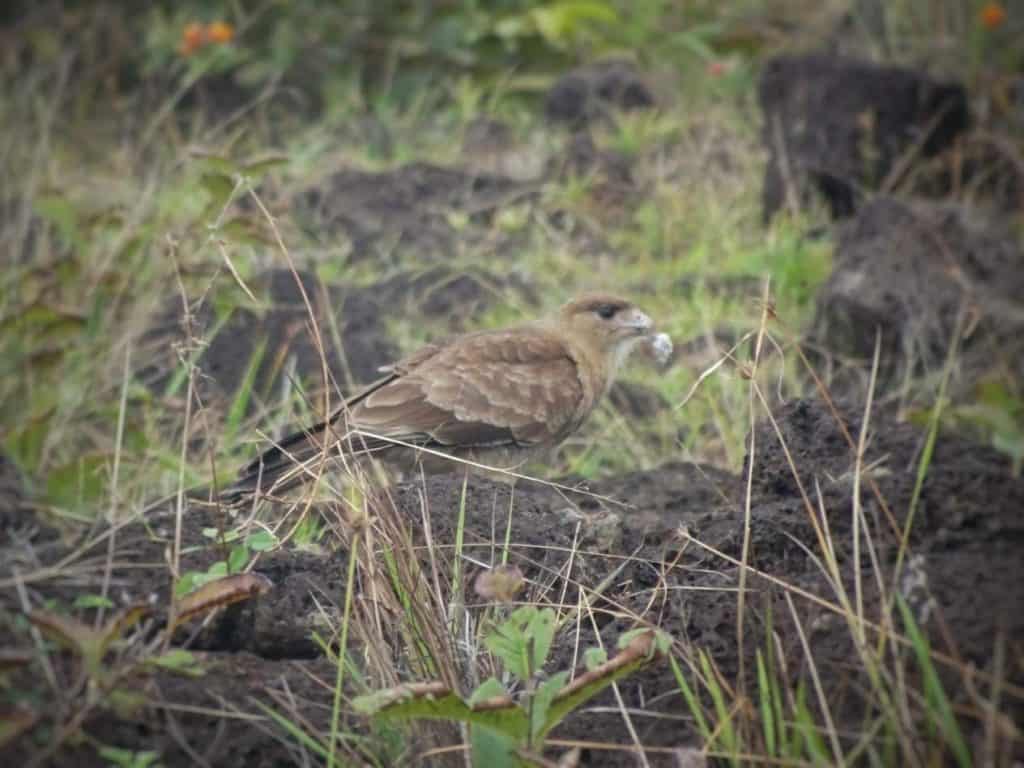 There are only two places on Easter Island that were slightly crowded. One was Tahai, a group of moai very close to town. It’s a famous location to watch the sunset. Thus, quite sometime before the sun goes down, people already start assembling on the wide lawn before the moai. It can feel particularly full after you’ve spent several days only seeing cows and birds, but it’s still a far cry from being overrun. Besides, the sun setting behind moai is not something you get to see every day, it’s worth putting up with some company.

I was actually there twice, once by myself and once with some people from the hostel. We sat down a bit further back and sipped the wine and pisco sour we had brought along while watching the spectacle that is a sunset on Easter Island. It was beautiful, and still peaceful enough not to stress out my introvert soul. 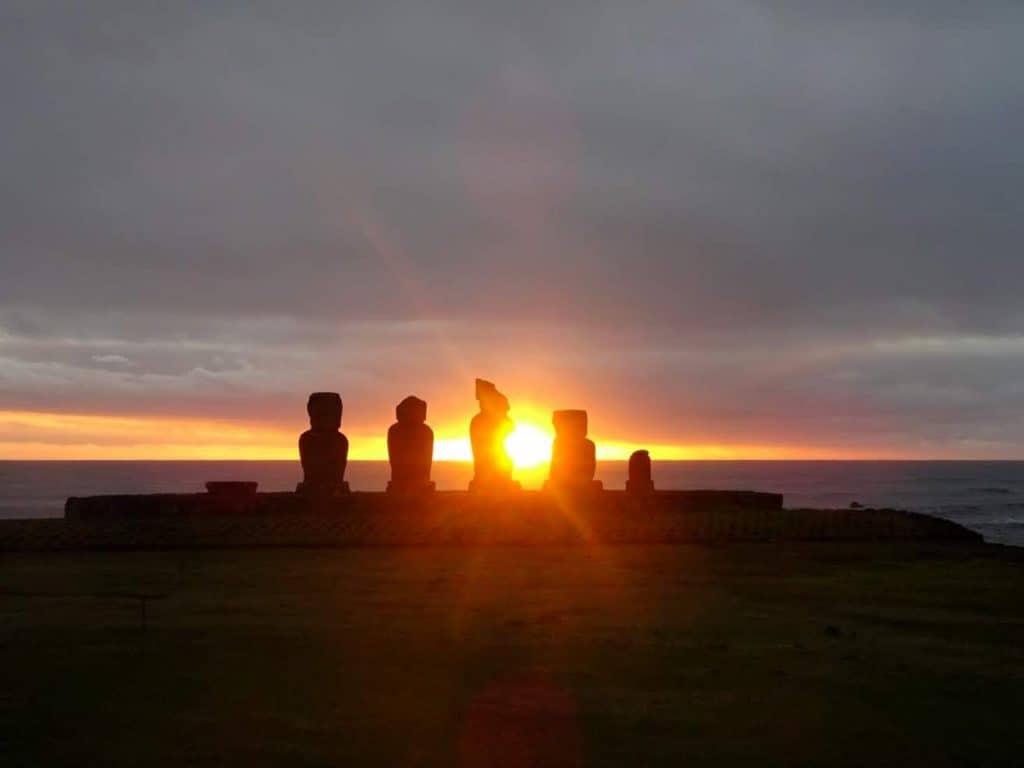 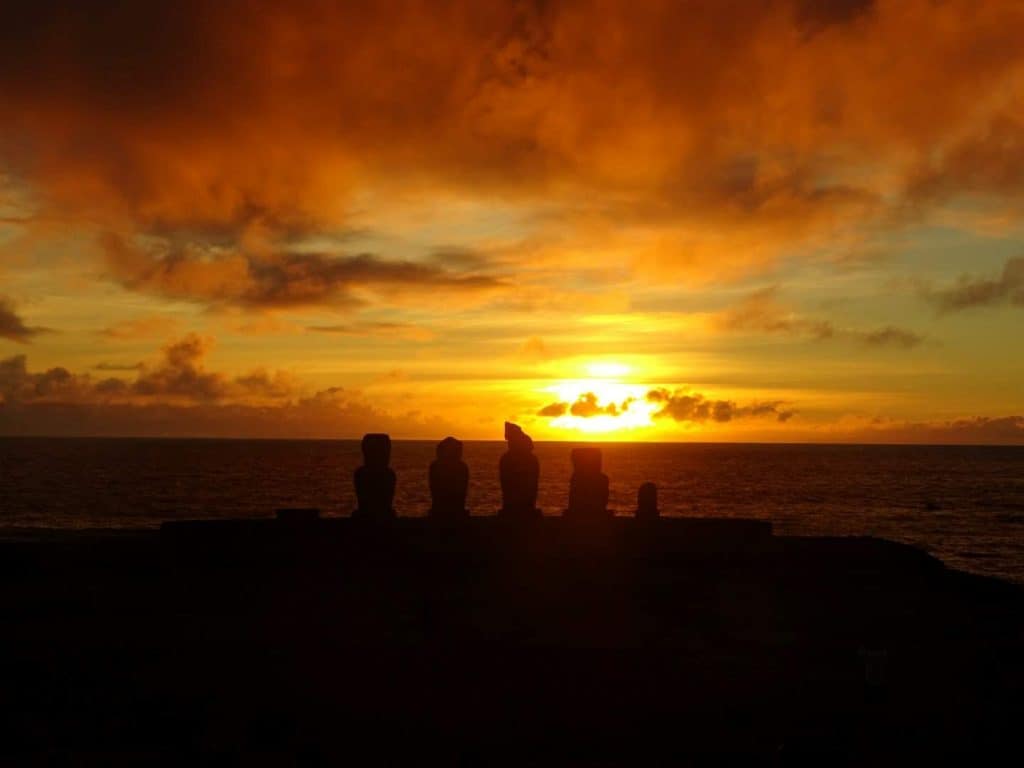 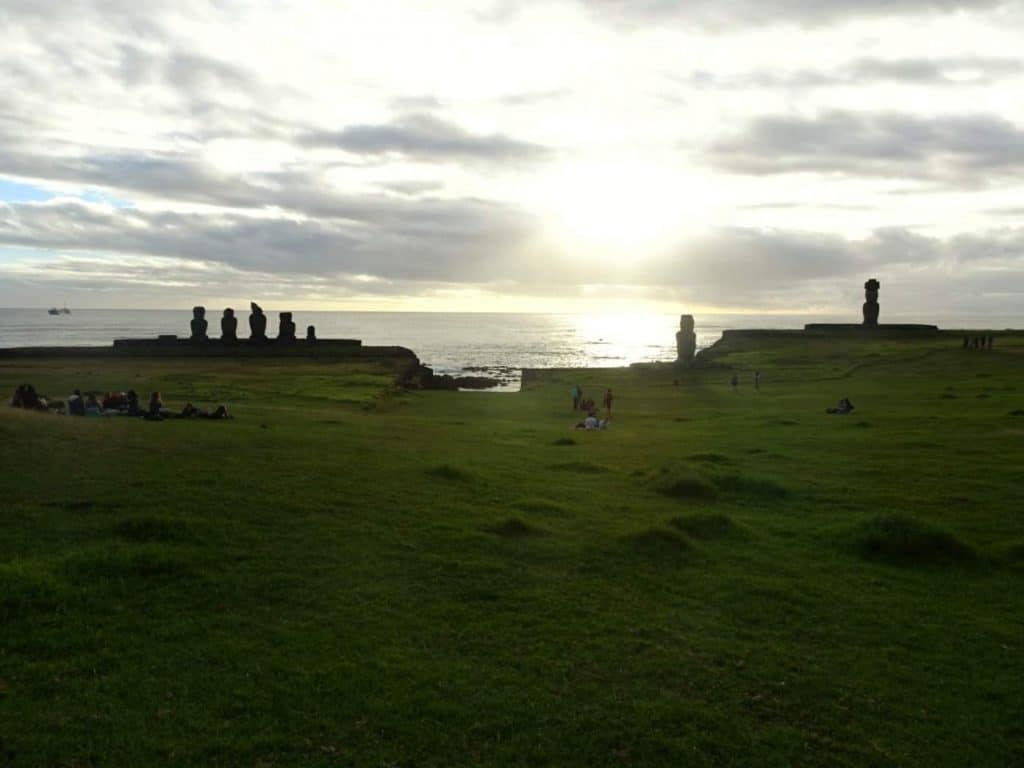 Finding a quiet spot at the beach

The other place that was somewhat fuller was Anakena Beach. It’s the only sand beach on the island, so naturally, many people come here if the day is nice. Again, it was more people than I’ve ever seen at any of the other places on Easter Island, including at the main tourist attractions, but I still wouldn’t call it packed.

There is another tiny little beach you can walk to from Anakena, called Ovahe Beach. When I got there, I was the only person, which was pretty cool. However, that was a bit of good luck. I don’t assume it’s always empty. I wouldn’t avoid the beach just for the people, but it may be good to adjust your expectations, so it’s not a negative surprise. 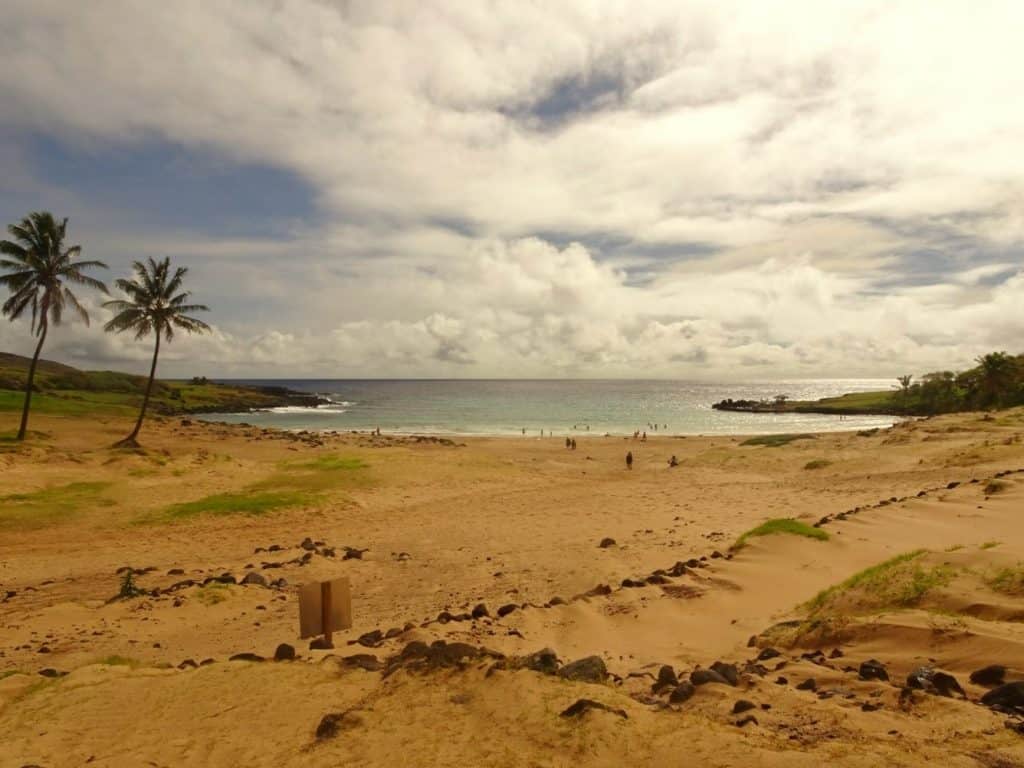 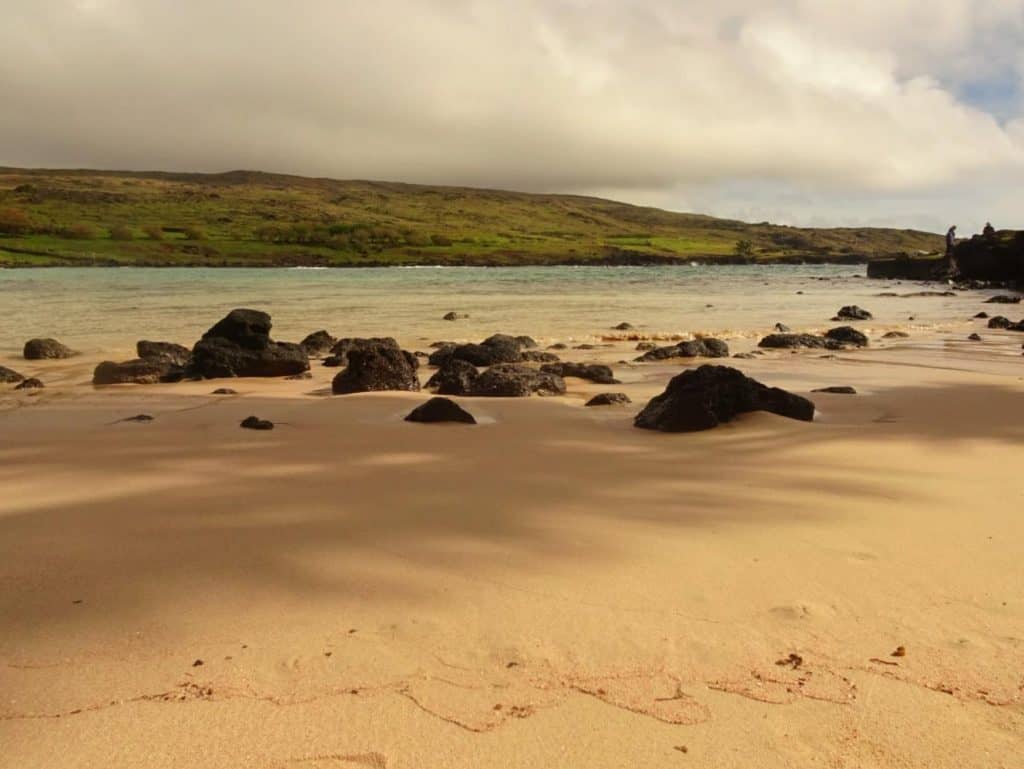 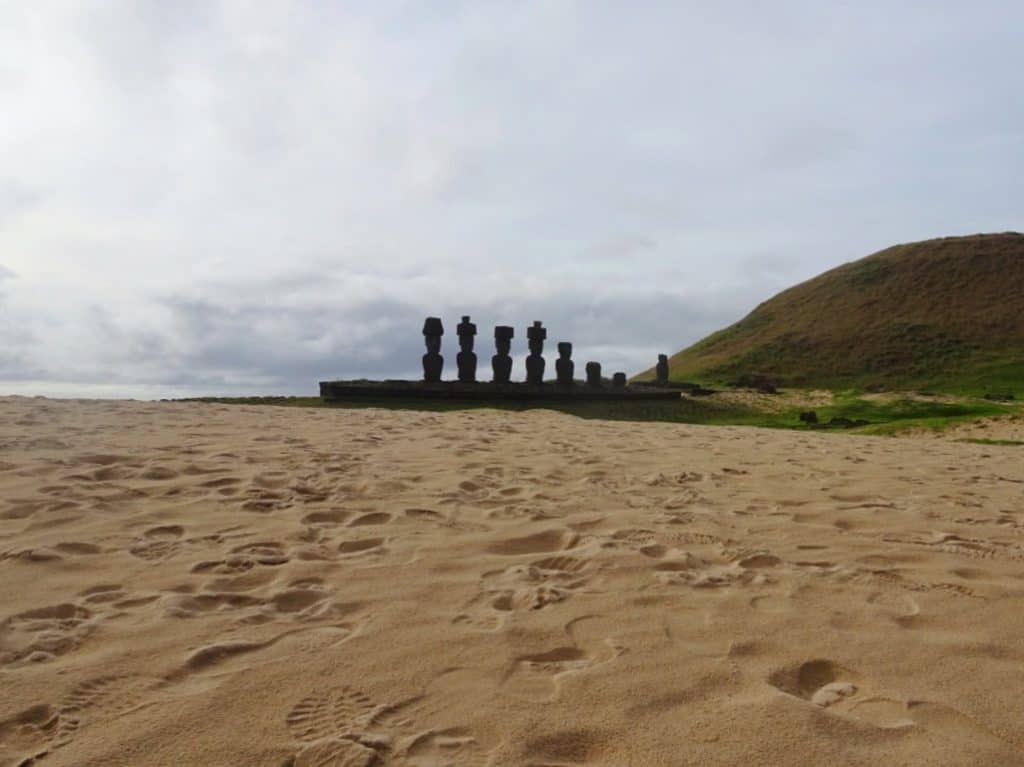 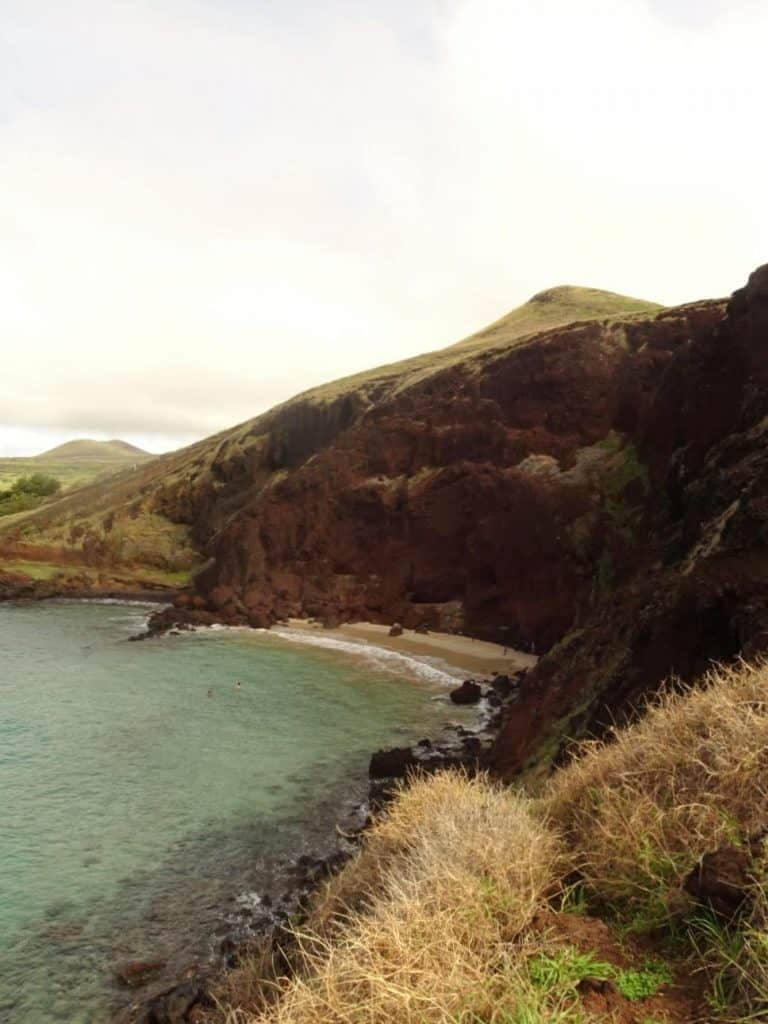 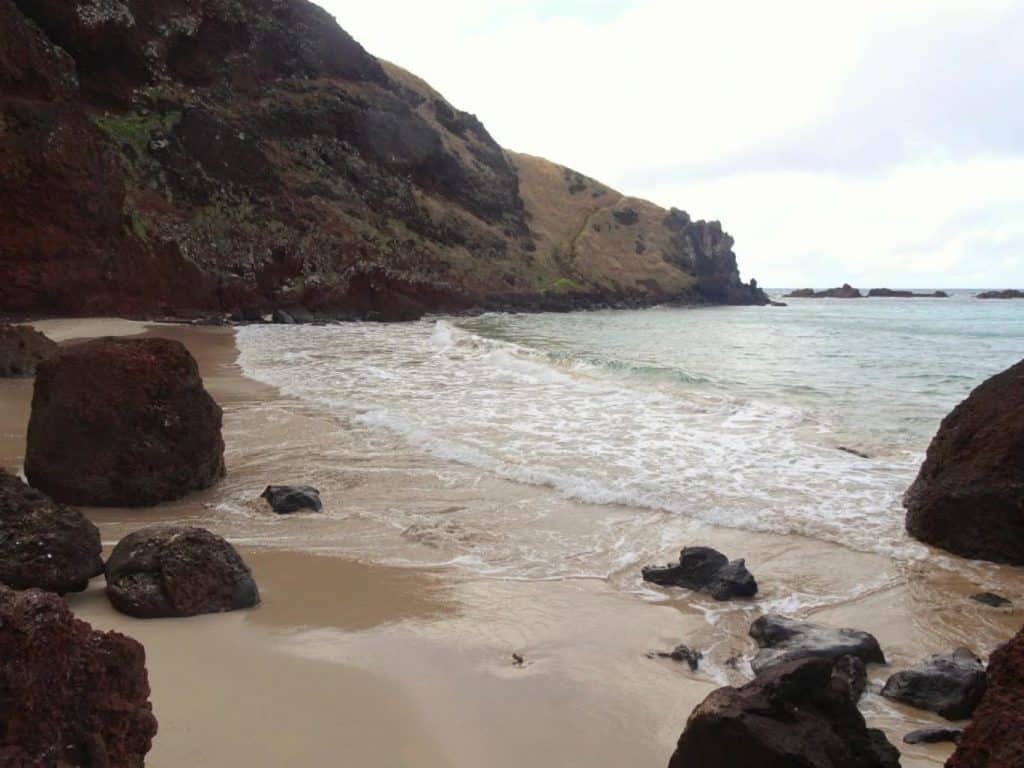 Staying in a pretty small hostel in Hanga Roa, it didn’t take long for all of us guests to bond. This led to a small group of them offering me a seat in their rented car to go and watch the sunrise one morning. There’s a long line of Moai at a place called Ahu Tongariki, which is on the Eastern side of the island and thus has the sun rising behind it. This is one of the places too far to walk to, so I was glad to get this opportunity.

We arrived well before sunrise and one of the group, an astronomy nerd, passed the time by taking pictures of the night sky and pointing out constellations for us. Shortly before sunrise, the moai site opened and we went in, together with a group of other early risers, to watch. While there were some more people there, it wasn’t nearly as full as at the sunset. Which is probably due both to the early hours and the greater distance from Hanga Roa. 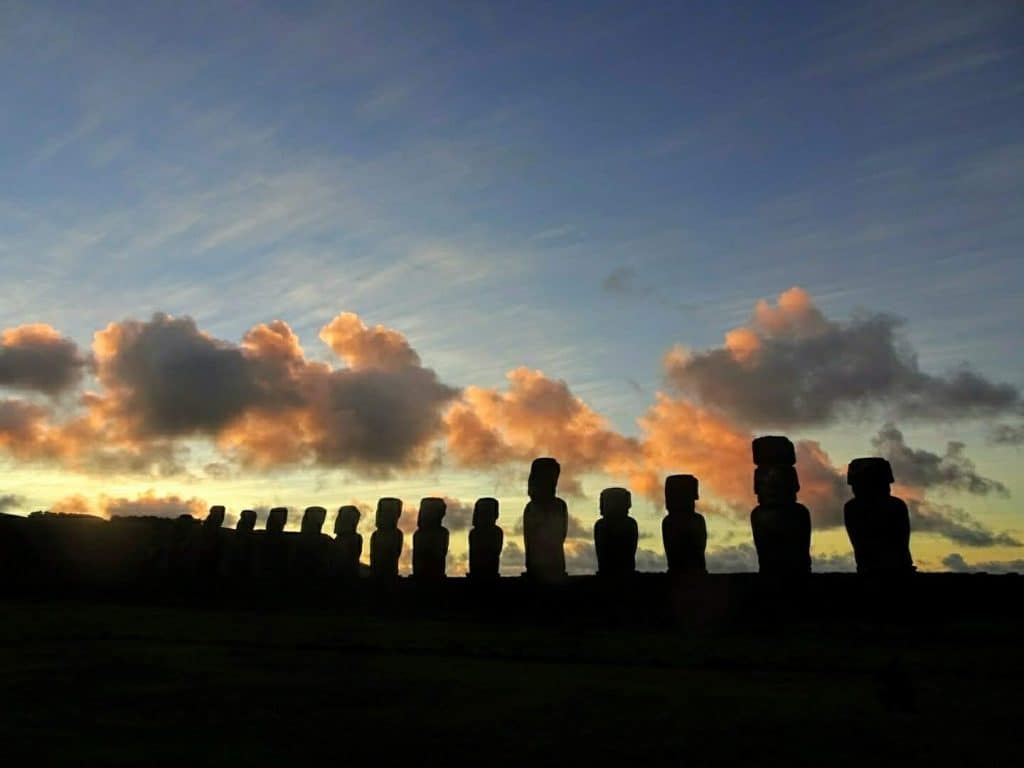 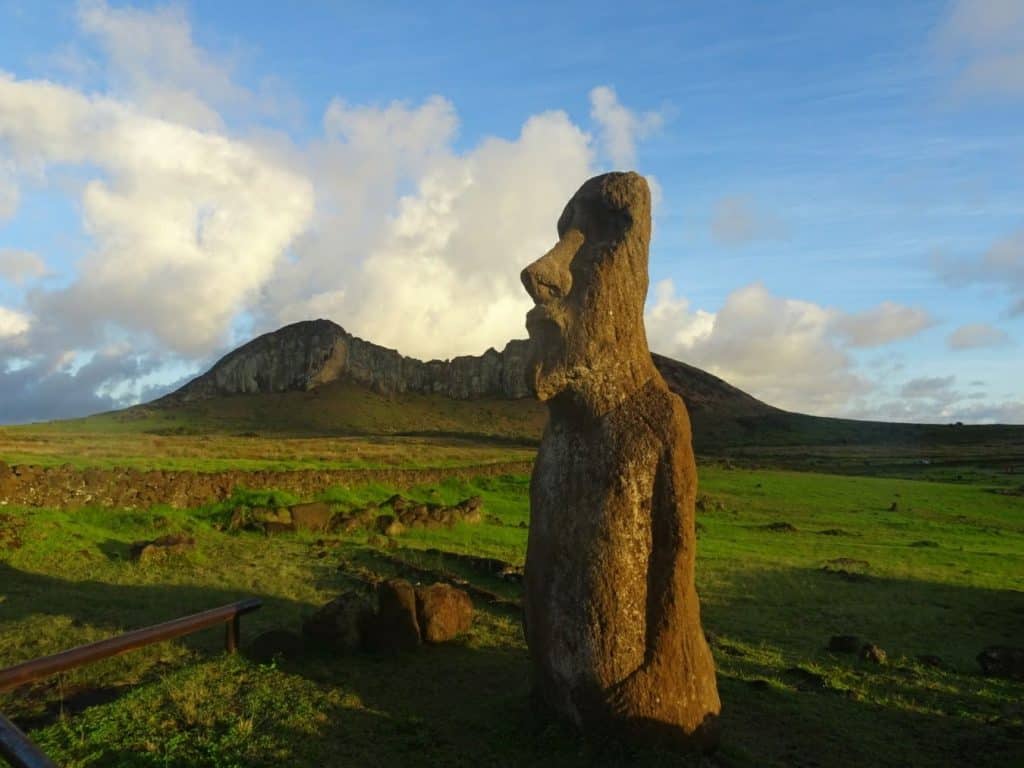 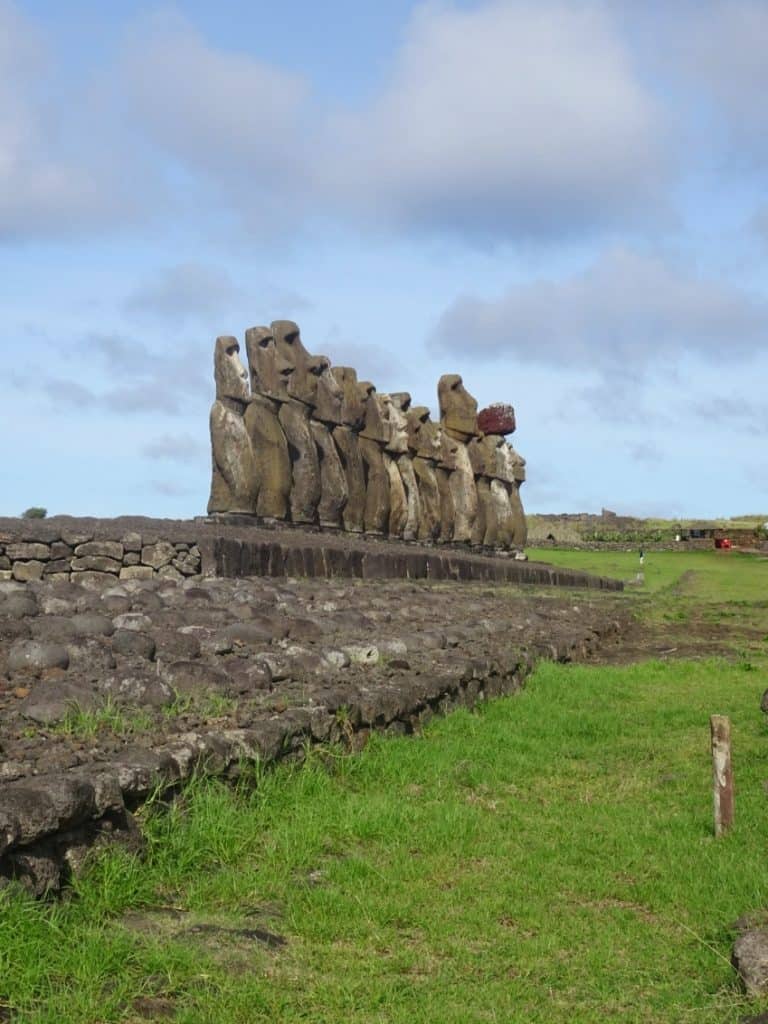 The perks of a day tour – despite the people

The other time I willingly joined a group for some more exploring was during a day trip. I had booked it to visit the sites on the far side of the island, which were too far off to walk. This most importantly included the Rano Raraku Crater, building site of most of the moai. Of course, renting a bike would have been an option, too, but I’m not really into cycling (to put it mildly).

Besides, I was looking forward to the chance to visit some moai sites with a guide, rather than only just by myself. While they’ve put up information boards at all the sites, a guide can give you much more detailed information than a few surface facts. The tour was fascinating, and I would highly recommend doing one when you visit Easter Island, even if you’re the type who typically doesn’t do group tours. You can learn so much more about the Rapa Nui culture when you have an expert with you.

In my case, I was also quite lucky in that the greatest part of our group was Spanish-speaking. There were only two other visitors who required the tour in English, an incredibly nice couple from New Zealand. Thus, the three of us had one guide to ourselves, while the other twenty or so people were off with the Spanish-speaking guide. It was almost like getting a private tour! 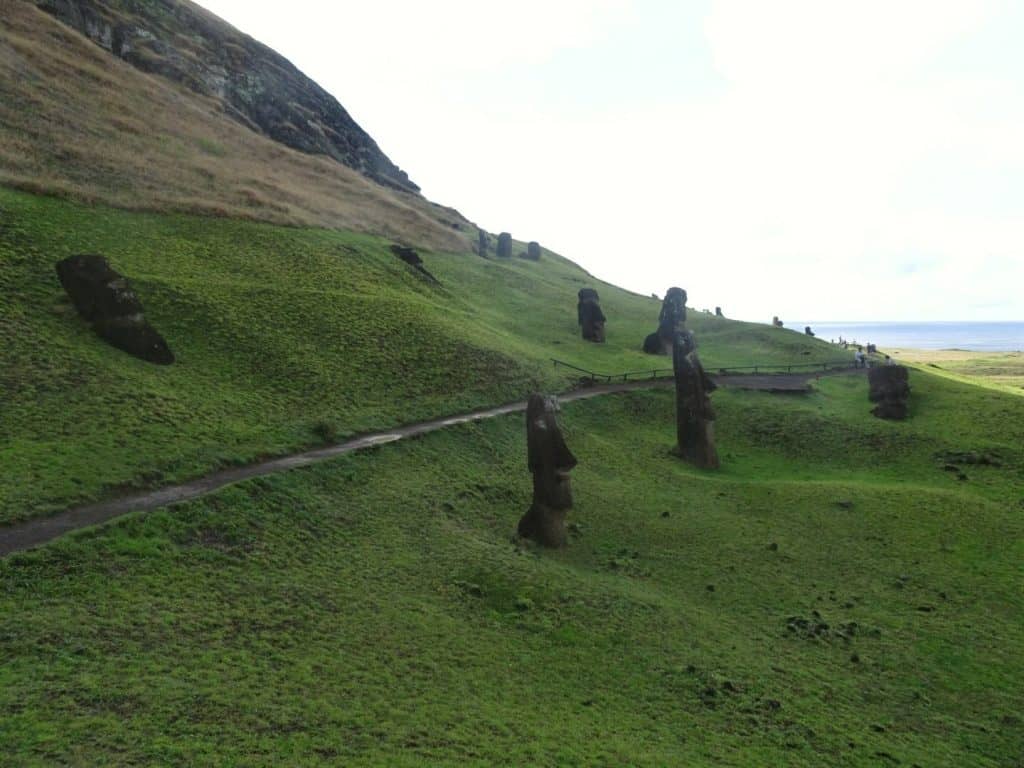 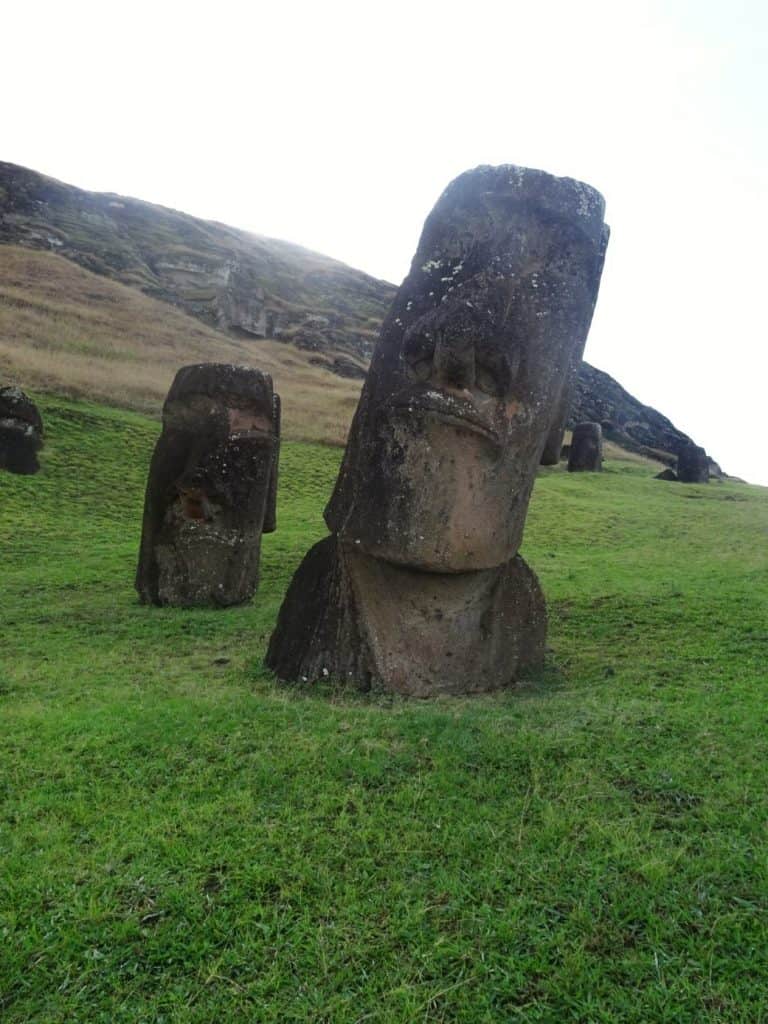 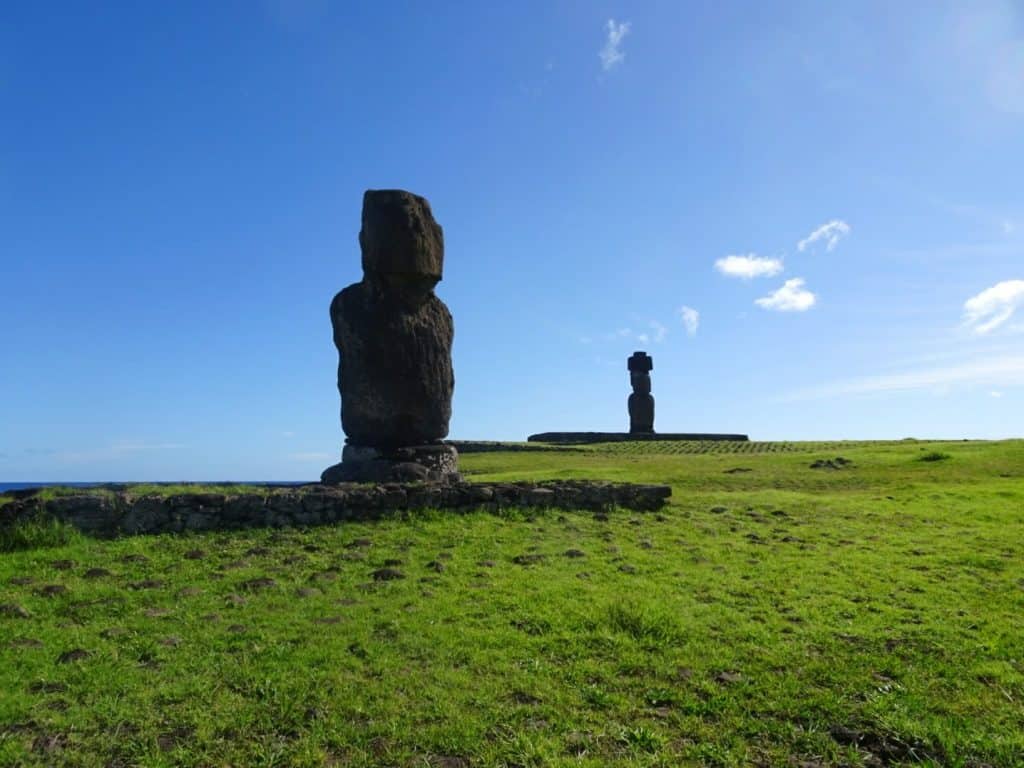 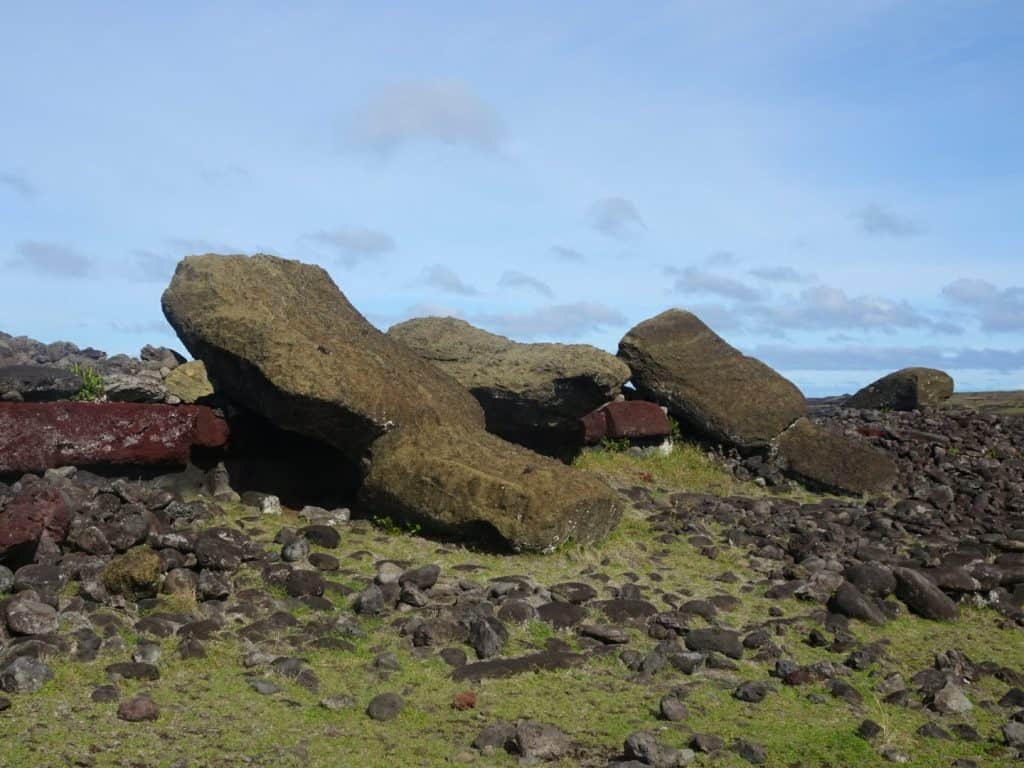 The most challenging day for this introvert

The entire week I spent on Easter Island was shaped by plenty of alone-time, low-key activities and the simple enjoyment of being surrounded by amazing scenery and fascinating culture. However, on my last evening, my introvert nature got challenged for once.

Getting along so well with my hostel-mates, I accompanied some of them to a traditional Rapa Nui dance show. It was fun – until the dancers started asking people to join them on stage. You guessed it – one of them came to me. The first time, I still got away by referring her to another guy in our group, who had previously announced he’d love to join the dancers (and did so quite happily). But then a second came along and wouldn’t accept no for an answer. At least we managed to hide somewhere at the back of the stage behind all the other people. By now half the auditorium was on stage, so I guess it didn’t matter much anymore. Still, I was happy to return to my seat.

Lesson learned: if you go to a Rapa Nui dance show, sit in the back, and hide behind your extroverted companions – which you hopefully brought along to this. 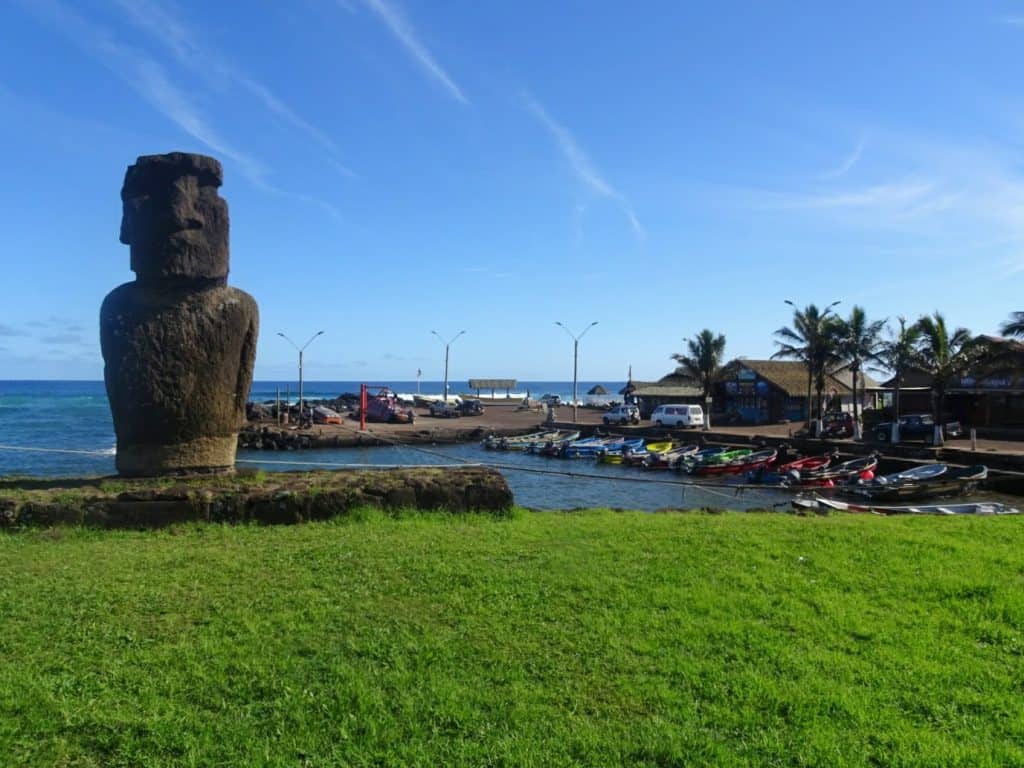 Easter Island was everything I had hoped it would be, and more. It was special in so many ways: the peacefulness of island life, in combination with the fascinating Rapa Nui culture, and of course the real-life moai statues, something I’d only ever seen on television. I could easily have stayed longer. My inner introvert would surely have enjoyed that. Just maybe no more dance shows for me… 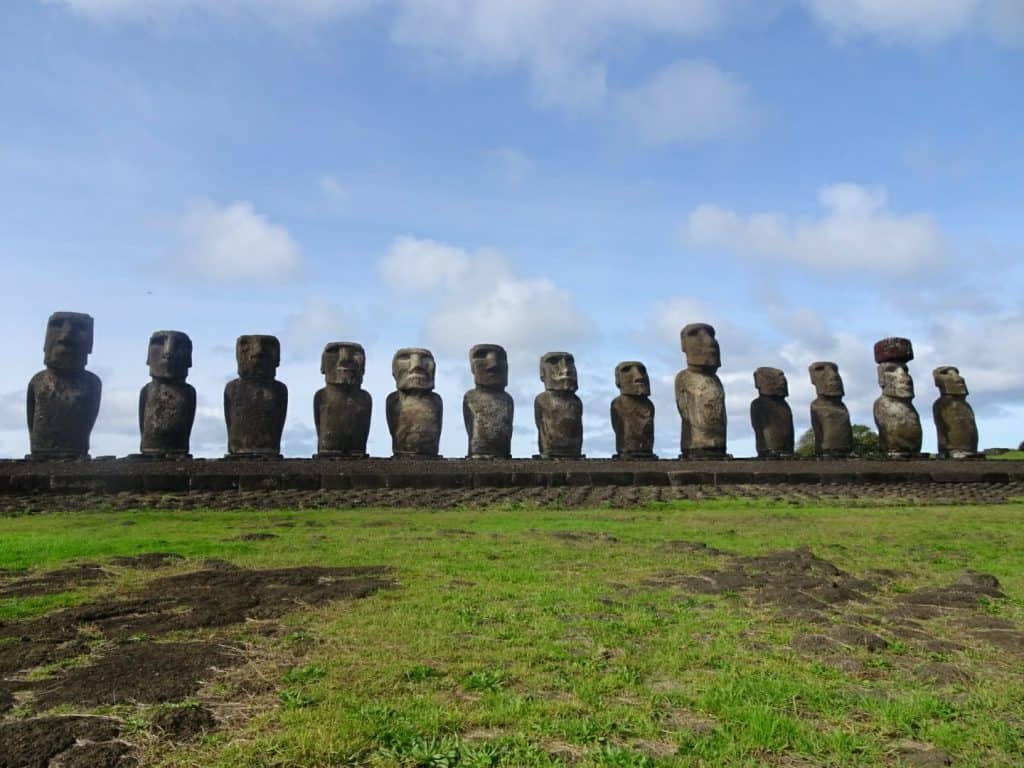 Easter Island can only be reached by plane from Santiago. It’s part of Chile, so whatever visa you require for the mainland will also cover Easter Island.

All the moai of the island are part of the Easter Island National Park and you will need to buy a ticket to visit. This can be done either directly upon arrival at the airport, or at a ticket office in Hanga Roa’s main street. A ticket is 54.000 Pesos (almost 70 €) for tourists and 20.000 Pesos (about 25 €) for Chileans and residents (hint: with a Chile working holiday visa, you count as a resident). It’s valid for 10 days and you can visit most sites as often as you like, except for two. Rano Raraku and Orongo you can only visit once.

Car and bike rental are pretty easily available anywhere in Hanga Roa. There are also different tour companies offering day trips to various parts of the island, as well as activities such as horse-riding, diving or snorkelling. My personal recommendation is to do at least one guided tour, just for the experience of having a guide answer all your questions about moai and Rapa Nui culture. Because you will have questions!

A lot of places can also be reached from Hanga Roa on foot, at least as long as you don’t mind several hours of walking. Anakena Beach, which is on the opposite side of the island, can be reached by a shuttle bus that leaves several times a day from Hanga Roa. 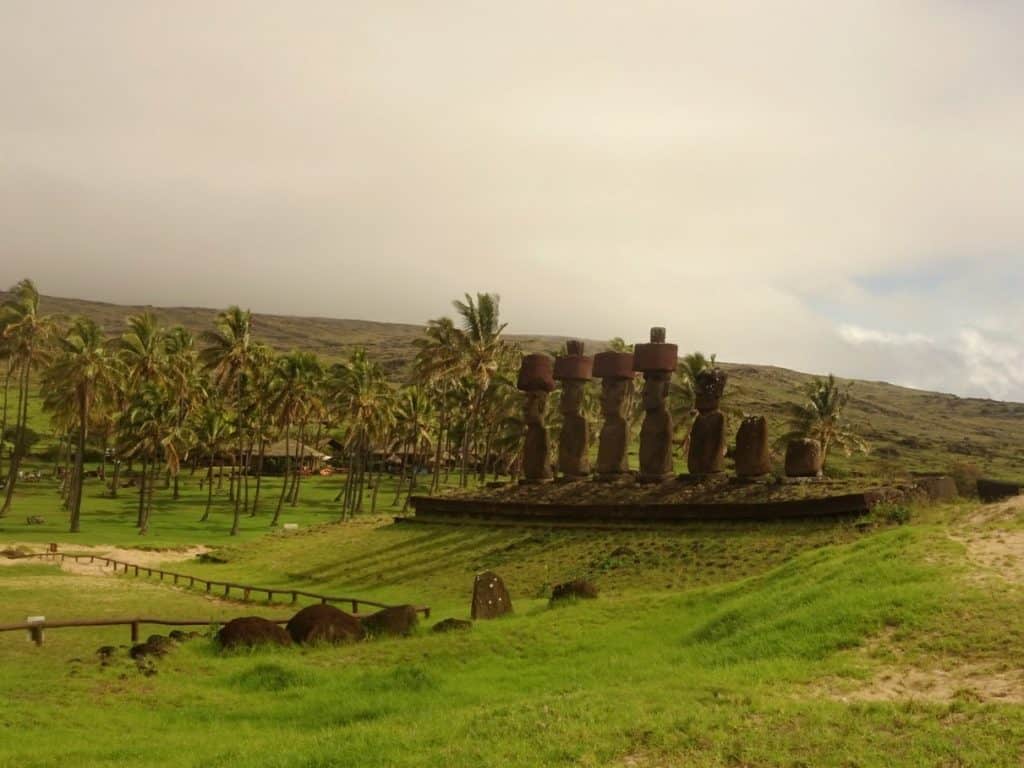 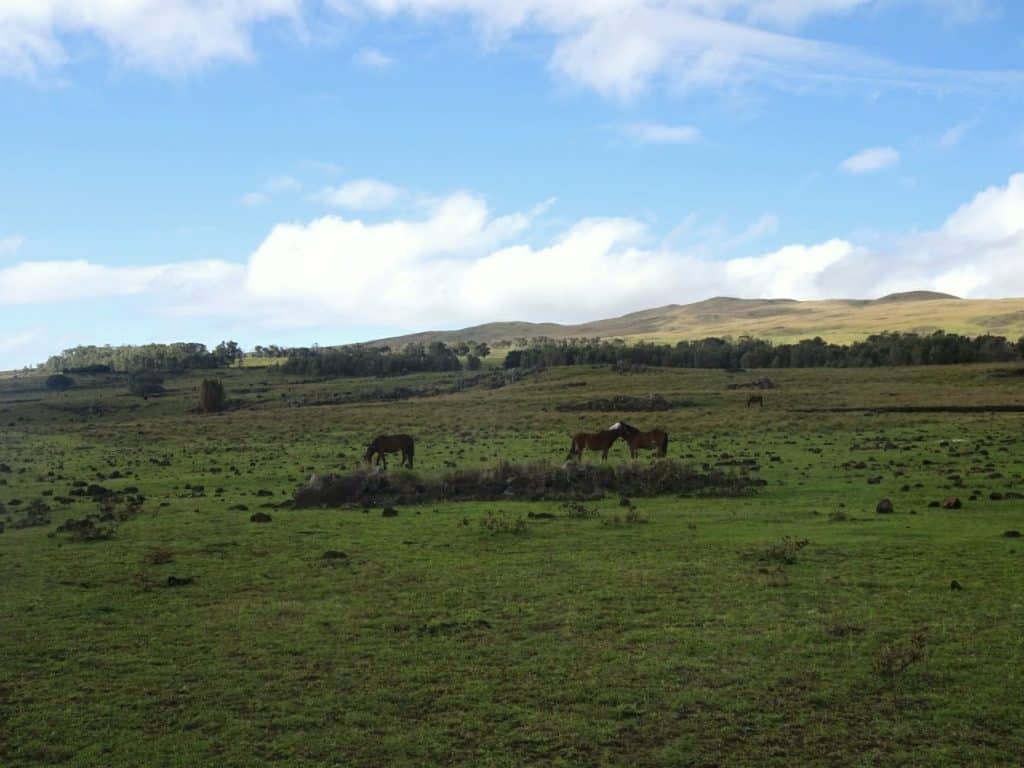 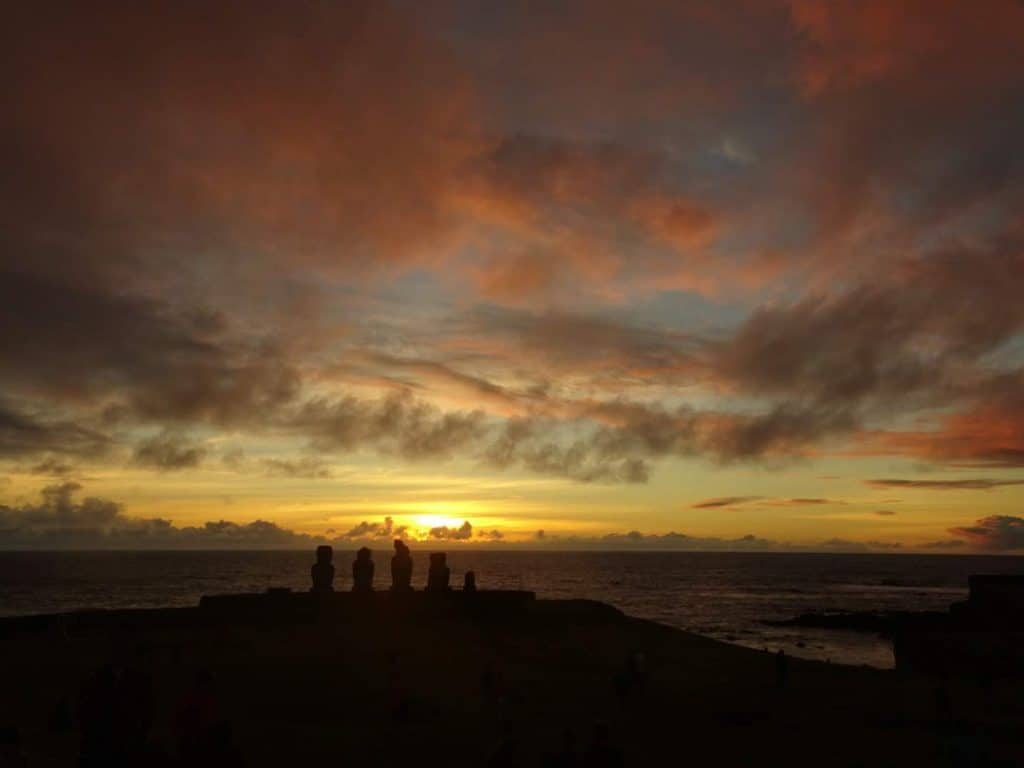 Have you been to Easter Island? What was your experience like? If you haven’t been, does this make you want to go? Share in the comments! 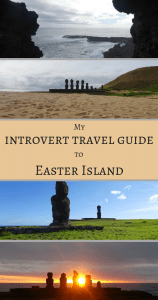