Warning: Parameter 2 to wp_hide_post_Public::query_posts_join() expected to be a reference, value given in /home/customer/www/globalintrovert.com/public_html/wp-includes/class-wp-hook.php on line 292
 5 valuable life lessons learned on Ischia • Global Introvert Skip to content

In 2014 I spent a week on Ischia, an island off the coast of Naples. While exploring the island with my two travel companions, we learned a lot about the Italian way of life. Or maybe it was the Ischia way of life. Either way, it held a few important life lessons in store for us about how sometimes you simply need to take things as they come.

1. Just go with it – even when it seems no one knows what they’re doing

The journey to the island was already quite adventurous. The only way to Ischia is by ferry from Naples. So we took the plane there and a shuttle service picks us up at the airport to take us to our accommodation on the island. Sounds pretty straightforward, doesn’t it? That’s what we thought, until we met the driver sent by the pick-up service. He hardly spoke a word (which seems rather unusual for an Italian). Instead he quickly made us aware of the differences between the German and the Italian driving style: the Italians have a happy disregard for any rules. I don’t know how we made it to the harbour alive.

At the harbour he left us sitting in the car to get the ferry tickets. He took so long that we started to wonder whether we’ll ever see him again. When he eventually returned he ushered us onto the ferry and left us there on our own. So we went to sit on deck and enjoyed the view, while hoping that someone is going to meet us on the island. Our driver had been scarce with information.

Luckily there is indeed a new driver waiting for us on Ischia. This one is somewhat more talkative than the last. At least he says hello. Forio, our destination, is on the opposite side of the island. During the drive we take a first look at the beautiful landscape and the picturesque towns with their narrow streets – where we have some haphazard encounters with other drivers.

In Forio we’re suddenly asked to change the car. The van we’re in is too big to make it up the tiny street to our accommodation. The new car also comes with a new driver, and he is by far the nicest of the lot. He gets excited when we tell him that we’re German, because he lived in Munich for some time. We are a welcome opportunity to refresh his language skills – barely pausing in his conversation all the way up the road. There he leaves us in the good care of our hosts at Casa El Parral. It’s late in the evening by now. So late, in fact, that our host generously drives us to a supermarket later to stock up our supplies, because everything in walking distance is closed by now.

So organisation may be a bit haphazard, but in the end everything worked out. Our accommodation was simple but nice, and the people there were great. Even our driver was so relaxed, he never thought to ask us for the money. He assumed he could do that on the transfer back to the airport a week later. No one except us seemed to bother with the question what would have happened if we had decided not to book the return transfer with them. We did though, and he got paid, and everyone was happy. 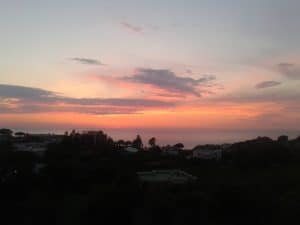 Compared to the public buses on Ischia our drivers were great. As we didn’t have a car we needed to take the bus everywhere. Theoretically it’s not a problem, because the buses go to every important point on the island. They do have a schedule, too. Only, they never come at the time they are meant to. Apparently bus schedules are regarded more as a recommendation than a mandatory timetable, and of course they are particularly late when you happen to be in a hurry. So you need to learn to relax, and just take things as they come. Or in this case, buses. 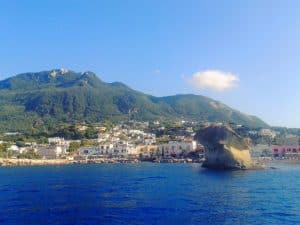 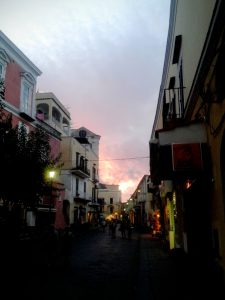 3. Be flexible with your plans

It’s not only the buses which may screw up your plans. We were also let down by the boat cruise around the island we had booked at the harbour. When we arrive at the scheduled time, there was only one ship there, and that belonged to a different company. Ours was nowhere to be seen. By chance we overheard someone at the ticket counter explain to another tourist that a cruise is cancelled. Somewhat alarmed now, we go to investigate. Indeed, it turns out our cruise is not happening today. The sea is too rough and a thunderstorm is announced for the evening.

The lady at the ticket counter promises us that we can use the tickets for the cruise the next day. Which works without a problem, and we get to do our boat tour around the island a day late. Shows you it’s always a good thing to be flexible, as we had to reshuffle all our plans for both those days. 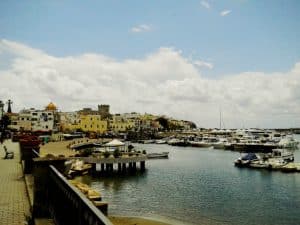 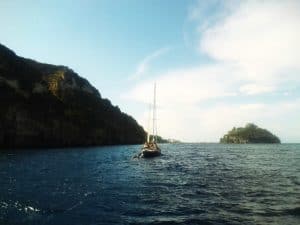 4. Trust that everything will turn out well in the end

I guess this kind of ties in with being flexible with your plans. Although everything started out very promising. We wanted to climb Ischia’s highest mountain, Monte Epomeo. Our host happily explained to us the different possible routes you can take to get up, and equally happy we took off for our adventure. Little did we know that this tour would become a lot longer than planned.

The walk recommended by both our host and our travel guide begins in the town of Fontana. The bus ride already takes us along some way up the mountain with nice views of the island. Once we reach the town we start hiking. Most of the path isn’t too difficult. Only occasionally there are bits that get very steep. It goes through the forest and then finally out into the open, past an old monastery near the top of the mountain.

After a 2,5 hour walk, we reach the top and have a well-deserved rest in the restaurant there, La Grotta da Fiore. The view of the island is spectacular. 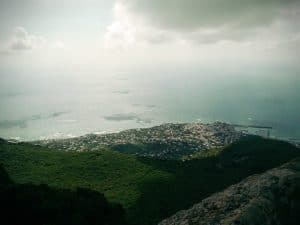 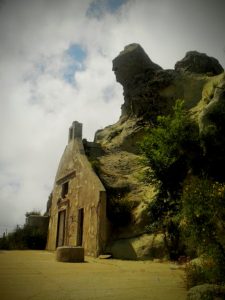 For the way down we decide to take a different route. According to our host that should take us directly to Forio. Very soon the path becomes increasingly difficult and we have to fight our way through the thick bushes along hardly visible trails. When we eventually reach the forest it’s only a deceptive victory. The path is uneven, sometimes hardly existent. More often than not it’s impossible to tell which way to go.

After more or less following our gut instincts for some time we came out of the forest high above a town we recognised as Forio. We make our way down in the hope of reaching the main street where we can catch a bus home. But even though we are now back in civilisation, it’s still a long way to go. By now tiredness and frustration is threatening to get the better of us.

Eventually, while standing at a cross-roads debating which way to take, a car stops next to us. The two women inside kindly offer to drive us to the bus station. Which was a relief, because on foot it would still have taken us a long time. Even now, we only get back to our accommodation at dusk, tired and full of mosquito bites. On the bright side, we’re just in time to see Germany win the football world cup, so everything turned out alright in the end. 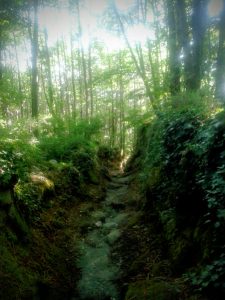 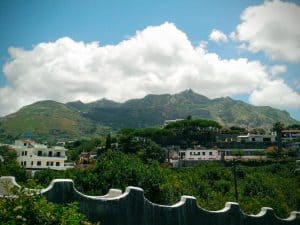 5. Sometimes you have to take the good with the bad

Our accommodation was beautiful, but the animal encounters there were of a more unusual kind. The first animal we came close to was a rat. Yes, rat. We spotted it from the balcony of our room. The first time we were slightly shocked, but as we kept seeing it roaming the garden in the evenings we decided to give it a name and become friends.

Klotilde, as we called her, became an eagerly awaited guest on our late-night drinking-on-the-balcony sessions. One evening, as we returned late, she jumped out of the garbage bins right in front of us. Cue lots of squealing from us. But out of excitement, not disgust. Yes, I’m weird when it comes to animals.

There was another outstanding animal encounter when we visited Castello Aragonese. That’s a beautiful old fortress, built in 474 BC. It served as fortress, castle, and prison at different times in history. It’s on a tiny island before Ischia and you reach it via a walkway. It towers high up on the rock, but luckily  there is an elevator nowadays that takes you to the top. Once you’re up you get the most amazing view of Ischia and the surrounding islands. 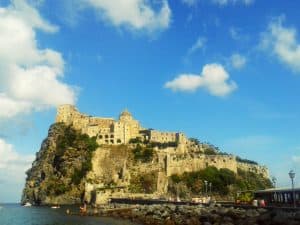 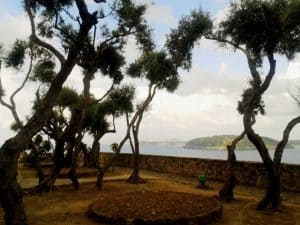 And then, we met Francesco, the creepy seagull. (Yes, of course we did give him a name, too.) We were having lunch in the restaurant right on top of the castle, on the terrace. Francesco crept closer and closer to us, viewing our food, and looking like he was about to attack. We only just got away with our lives. Can you see his evil stare on  the picture?

At the end of the visit you have to choose whether to go down again by elevator, or whether to walk down the stairs. My companions chose the lift, but I took the walkway. And it was the right decision. The walk down takes you past a former church and then through the tombs beneath it. There’s a small museum for weapons, suits of armour, and torture instruments. All the beautiful things of medieval life.

Right after that you have to follow a dark tunnel to get to the exit, and I was all on my own… I wouldn’t have wanted to miss this adventure just for an elevator ride. 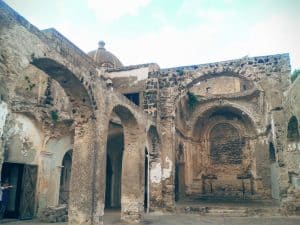 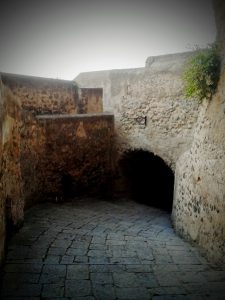 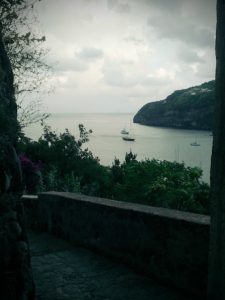 Despite creepy seagulls, rats, and a lot more walking than anticipated, Ischia was beautiful. The holiday there, though full of adventures, was one that frequently forced us to slow down and take some time off. When we attempted to squeeze in our full schedules, the island would invariably cross our plans somehow and force us to take a step back and pause. Rather than ruining our holiday by allowing ourselves to be annoyed by that, we took it as a welcome lesson that sometimes you just have to take things as they come. Especially when you’re on holiday. 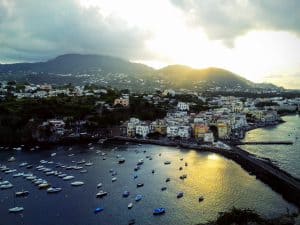