Warning: Parameter 2 to wp_hide_post_Public::query_posts_join() expected to be a reference, value given in /home/customer/www/globalintrovert.com/public_html/wp-includes/class-wp-hook.php on line 292
 A day in Furth im Wald or: Meeting the Bavarian Dragon • Global Introvert Skip to content

A day in Furth im Wald or: Meeting the Bavarian Dragon

Have you ever met a live dragon? No? Then you should visit the little town of Furth im Wald. It’s located in Bavaria, near the Czech border, and admittedly doesn’t sound like much at first. Certainly not like the dragon capital of Germany (if you even thought Germany had such a thing). But that’s only until you meet Tradinno.

Tradinno is the local dragon, and he is very famous indeed. So famous even that he inspired the dragon and its fight with the prince in Disney’s Sleeping Beauty, after the chief artists personally came to Furth im Wald to see him in action.

Before you all think I’ve lost my mind I should probably mention that Tradinno is, in fact, a robot. Would have been too good otherwise wouldn’t it? No need to be disappointed though. He is not just any robot, but the biggest four-legged walking robot in the world! That puts him at 15,5m long and 4,5m high. Impressed yet? 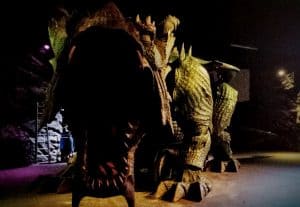 I first met Tradinno last year when I spent a long weekend in the Bavarian Forest region. You can visit him in his dragon’s den all summer long, where he sleeps peacefully – as long as you don’t awake him, of course. When I went last year it was early May, so not yet high season. My friend Nadine and I had the place to ourselves. That meant we didn’t need to worry that anyone would see us while we pretended to enter the Lonely Mountain and constantly hushed each other while we carefully tiptoed through the cave. Never wake a live dragon, right? 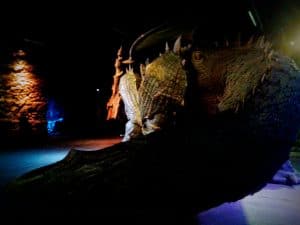 When we finally arrived in his den we sneaked up next to his massive head for photos, when suddenly he started snoring loudly. We jumped as far away as possible, until we were sure he’s still asleep. It got even worse when he roared, just as we were in the back corner far from any exit! You can say we got our money worth of entertainment out of the visit.

Entry is usually 6,50 Euro, but you get discount for all kinds of things. Last year we paid only 5 Euro, and I don’t even remember why. This year we paid 5,80, because we had tickets for the show in the evening. But more on that in a moment. Unlike last year, he was now sleeping with his mouth open, which made for some very impressive pictures. 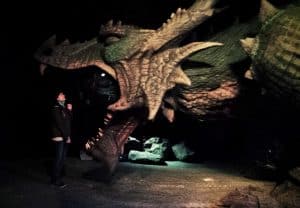 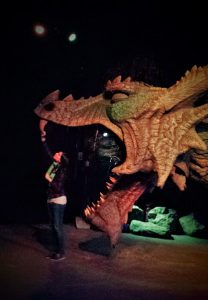 Due to the much higher number of tourists at this time of year we did not do the whole “enter the dragon’s den” routine, but tried to behave like normal humans. As far as we’re capable of that. Instead, we took the time to look at the exhibition part of the cave, where they tell you all about the history of the Drachenstich.

The annual “Drachenstich” is the one chance to see Tradinno awake and in Action. The festival goes back to a tradition that is over 500 years old. It always tells more or less the same story: the innocent virgin is about to sacrifice herself to the dragon, and the heroic knight saves her by killing the beast. For the sake of this show the people of Furth im Wald built a huge arena in the middle of town every August. A lot of it is always the same, only the dragon itself goes with the times. The current one is about 10 years old and fully mechanical. It walks, moves his head and tail, spreads its wings, and breathes fire. When it’s finally slain, it even bleeds from the mouth. Very heavily, I might add. 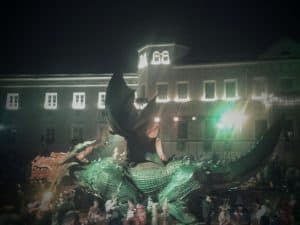 In the afternoon before the show there is a parade through town that includes the famous couple, the maiden and the knight. They usual marching bands and folklore groups accompany them. As the parade was not announced anywhere (that we were aware of), we were rather surprised by it. Still, it was a nice introduction to the evening’s heroes.

Traditionally the roles of knight and maiden are played by locals, and it’s someone else every year. Ours did their job very well, as did everyone else in the play. Most of all of course Tradinno, the dragon. It didn’t seem fair that the poor thing gets killed in the end, but I guess that’s the story. And after the show the defeated dragon gets back up to pose for photos, so no need to worry about him. By now, he’s probably back in his cave happily snoring and frightening visitors…