Warning: Parameter 2 to wp_hide_post_Public::query_posts_join() expected to be a reference, value given in /home/customer/www/globalintrovert.com/public_html/wp-includes/class-wp-hook.php on line 292
 This is how my first Africa safari went down • Global Introvert Skip to content

This is how my first Africa safari went down

It was my very first day in Africa, and I was about to embark on my first ever safari. Can you be off to a better start?

Although I was staying in Victoria Falls, Zimbabwe, the destination for the day was the Chobe National Park in Botswana. It’s not that far from Vic Falls to Chobe, but it does include crossing the border. Drive to the border was about 45 minutes, and already I was made very aware of the differences between tourists and locals. When we got stuck in a group of baboons that were floundering across the street, the driver was bumping his horn impatiently and complaining. I on the other hand was fumbling for my camera and couldn’t believe my luck of experiencing this before we even reached Chobe.

Only a few minutes later, we passed an elephant who was calmly munching his breakfast next to the street. This time, the driver stopped the car so I could get a good look. Sometimes, it’s perfectly acceptable to behave touristy. 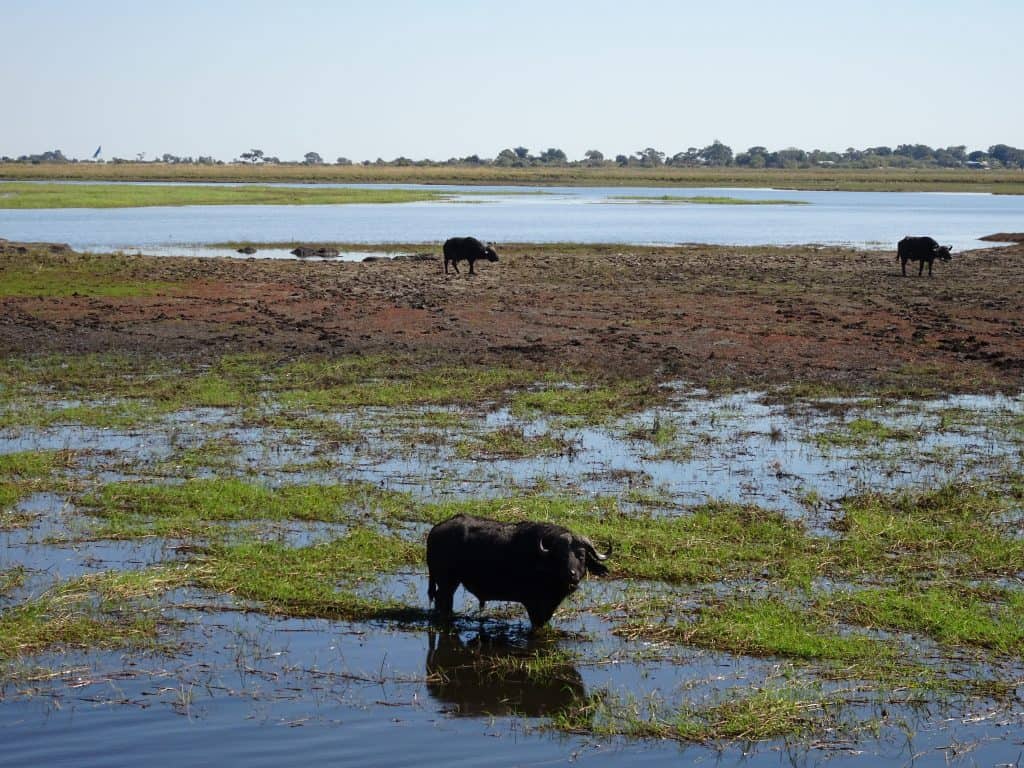 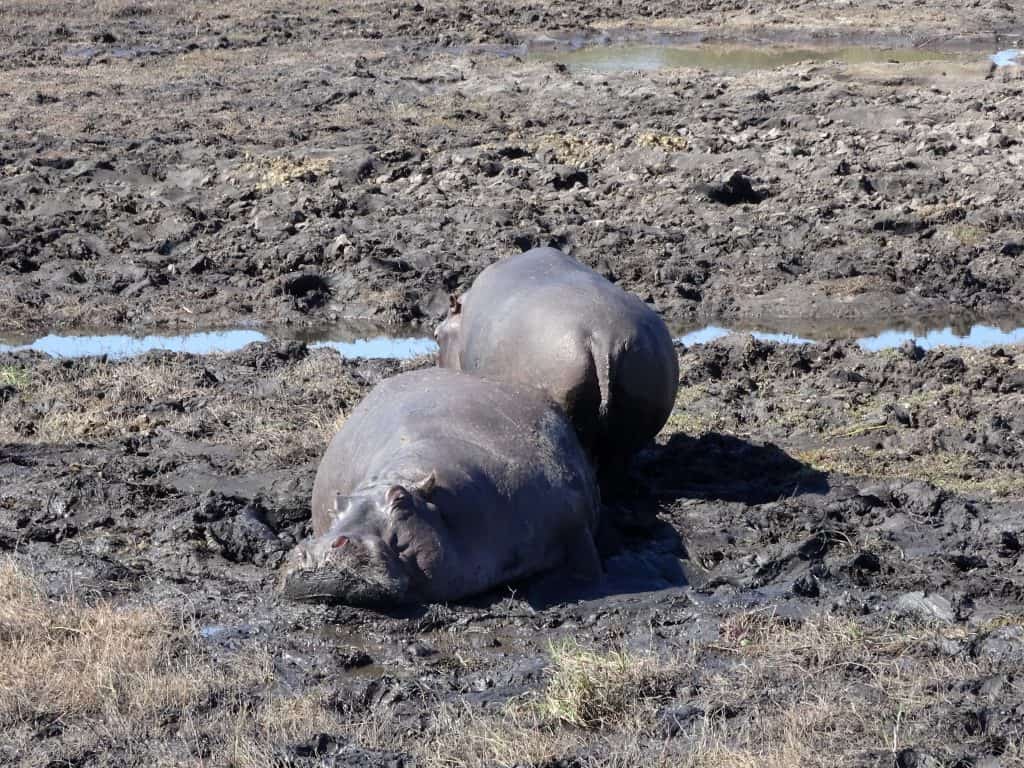 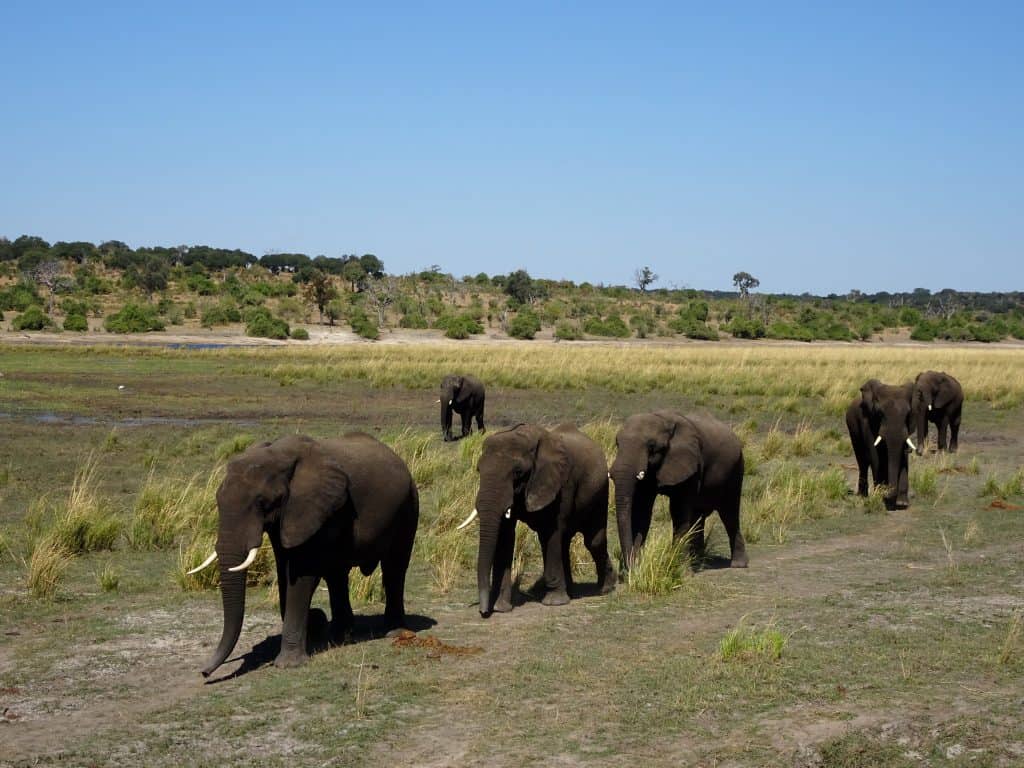 After crossing the border the driver changed and we were joined by some other tourists who were also headed to Chobe for the day.

On the way to the National Park we spotted some zebras on the side of the road. I wish I had my camera ready for them, because as it turned out later these would be the only zebras I got to see during my entire Africa trip. At this point, I still assumed there would be plenty more to see once we entered the Chobe. First safari lesson: wildlife is unpredictable.

After we all registered at the tour company office and got some coffee and cake for refreshment, the first part of our Chobe adventure was about to start: a boat trip on the Chobe River.

The landscape alone makes this part of the trip worth it. However, it wasn’t long until we spotted the first buffaloes in the distance. Coming closer, we also discovered hippos, crocodiles, and plenty of different antelopes. Some baboons played on the riverbank, and birds swirled through the air all around us. 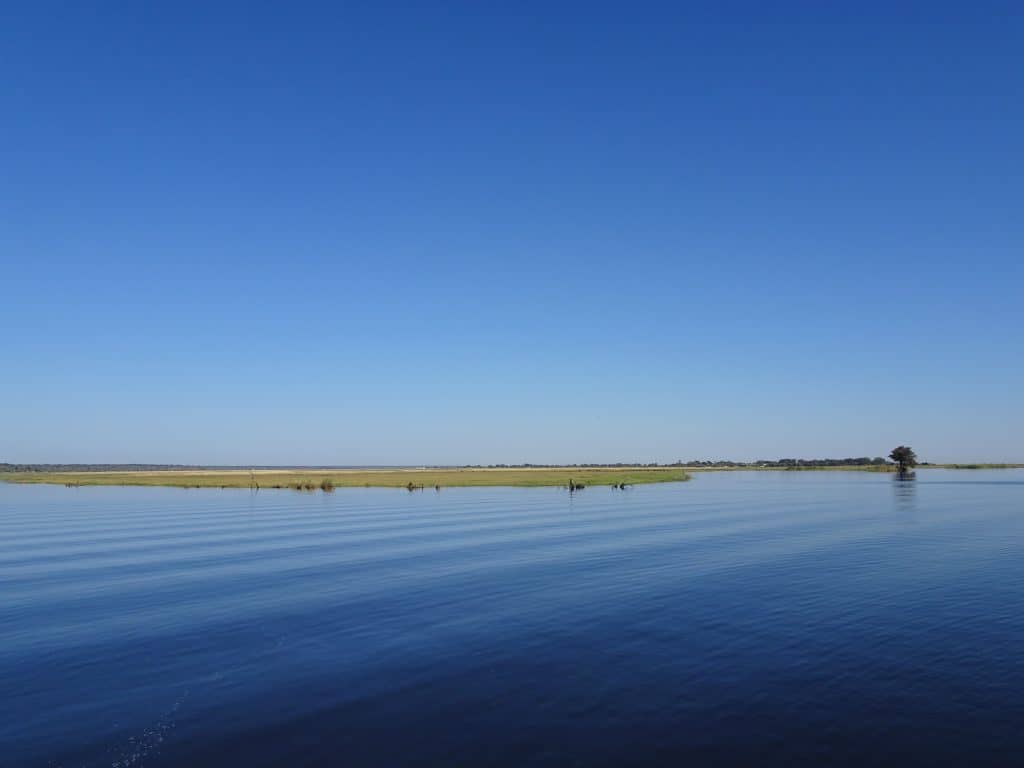 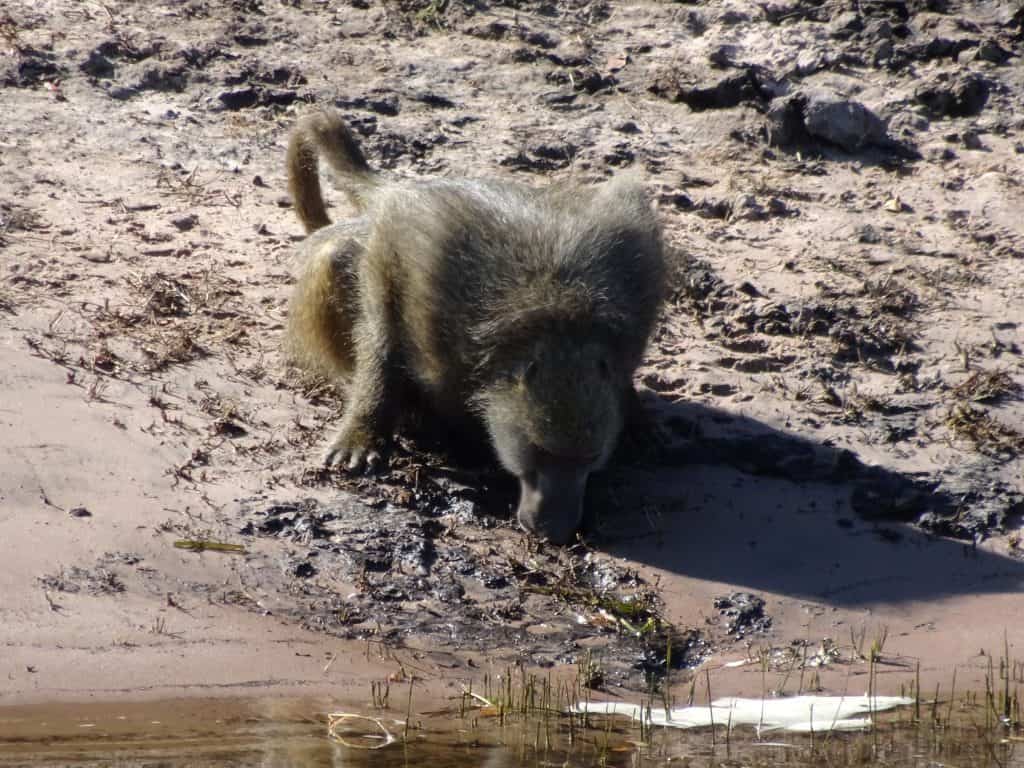 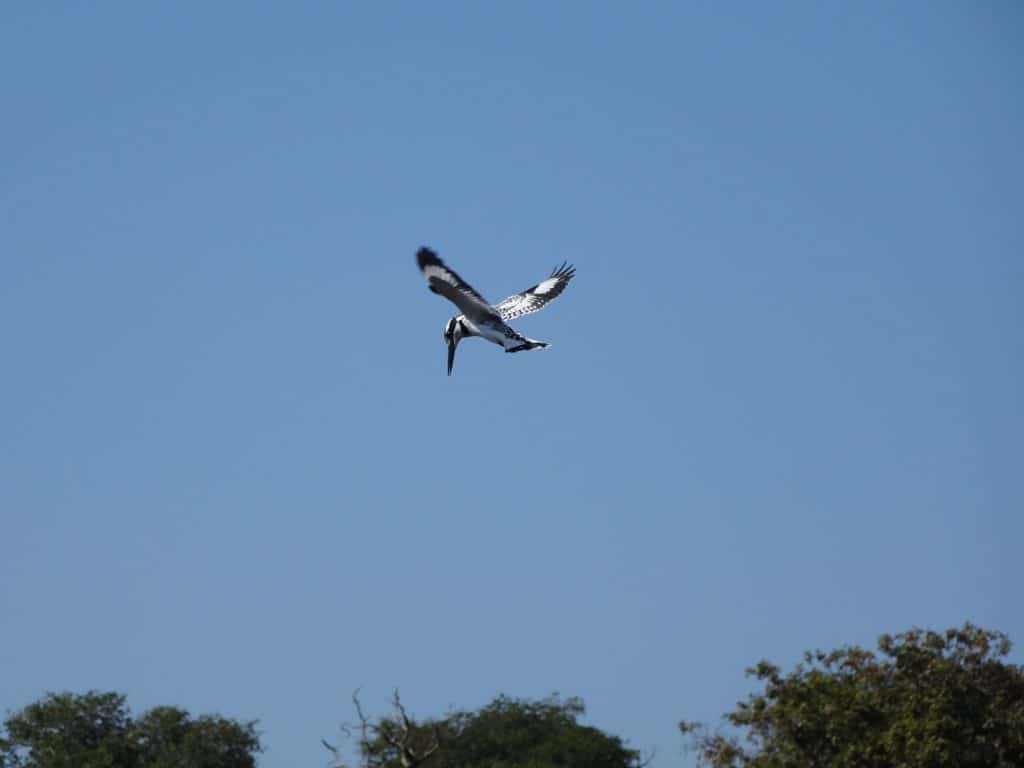 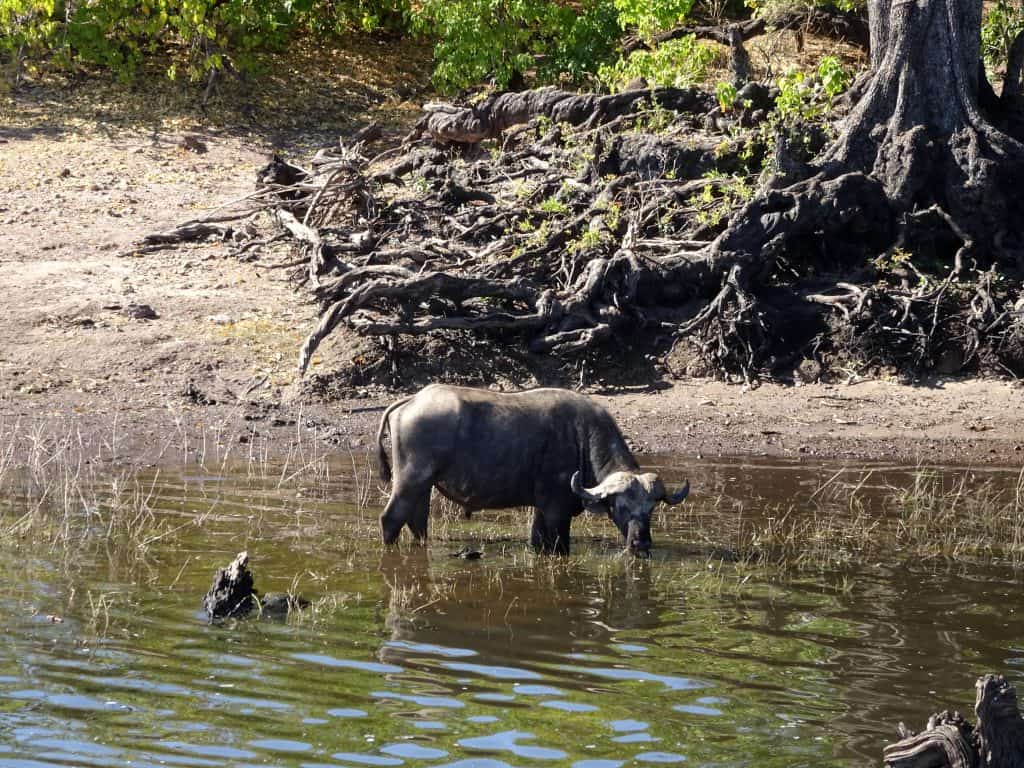 In the elephant capital of Africa

The greatest excitement broke out once we spotted our first elephant. I don’t know what it is about these animals, but they seem to be top on everybody’s wish list for safaris. And Chobe just happens to be the elephant capital of Africa, with the largest population on the continent.

It’s not a surprise, then, that we soon got to see a lot more elephants. Our guide told us that at around this time of day they often cross the river to get to the island on the other side. A small group of bachelors had already assembled on the banks of the river, with new animals joining them constantly. It wasn’t long until one made a start and swam across, right in front of the assembled tourist boats. Soon, others followed.

Seeing the elephants swim was an astounding sight. Some of them went completely under, using their trunks as snorkels. One turned around halfway and playfully pushed back against the other animals following behind him. He obviously enjoyed himself in the water. We spend a long time just sitting there and watching the spectacle, not believing our luck that we got to witness this.

Once our group of bachelors had made it to the other side, we continued our boat ride around the island. We caught up with elephants again on the other side, and followed them along the shore for a while. Only after several hours on the boat did we leave the elephants and other animals behind – for now. We turned in at a fancy resort hotel right at the river for a delicious lunch buffet. 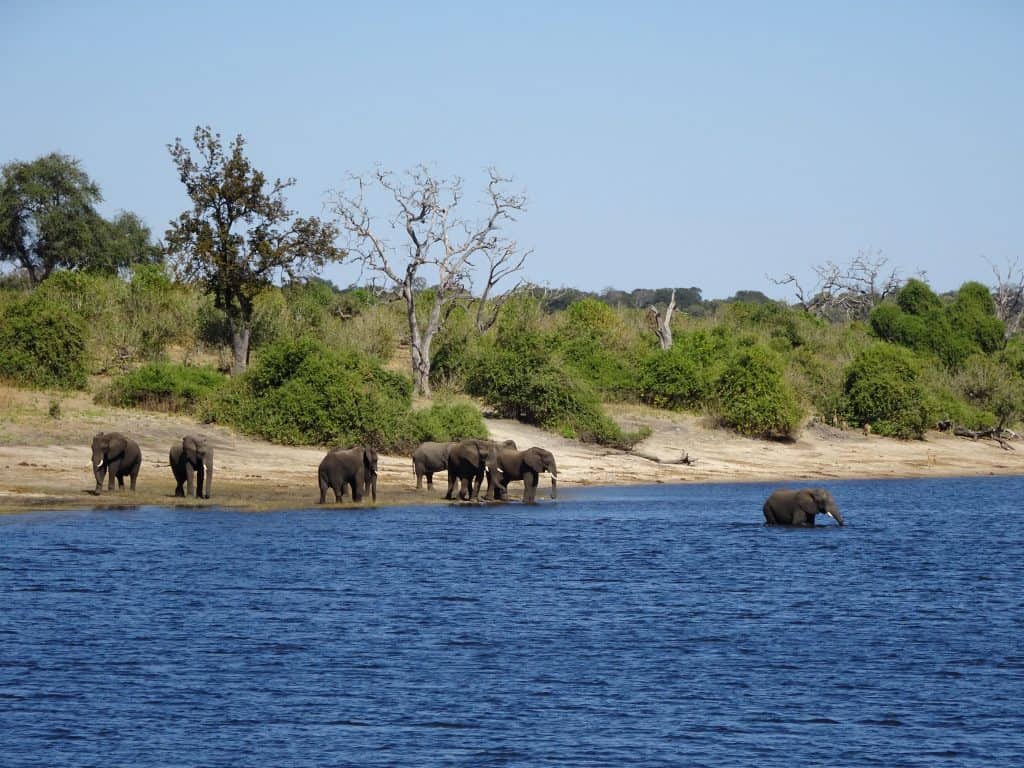 The first elephant is making a move into the river 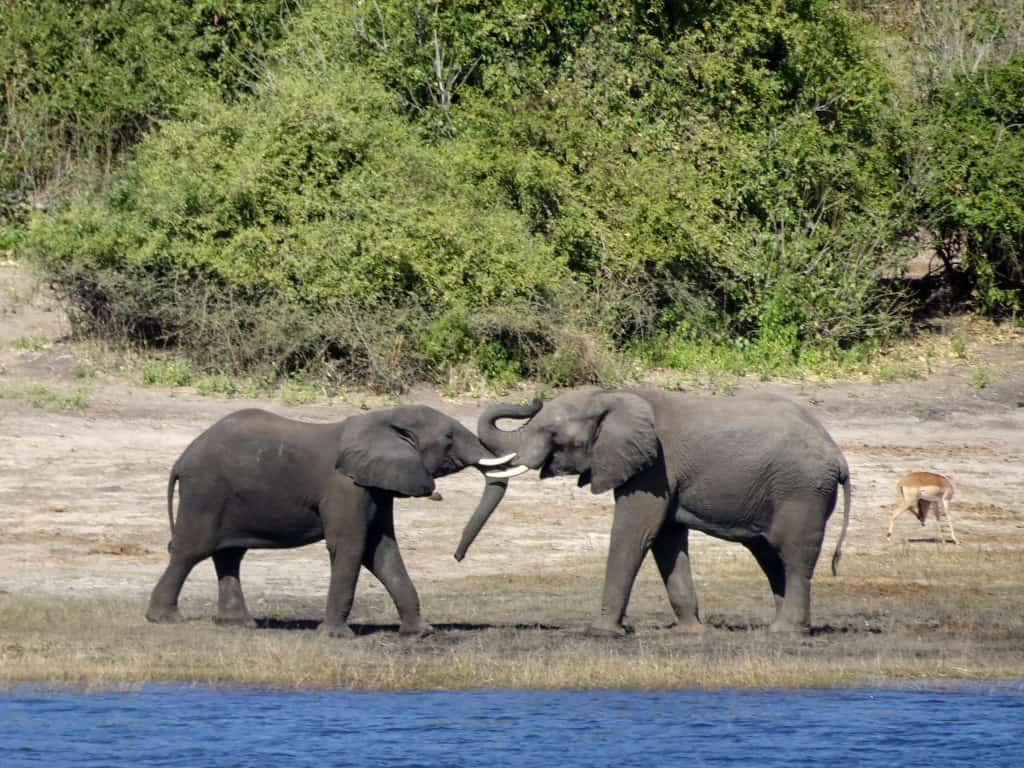 Two young elephants are fooling around 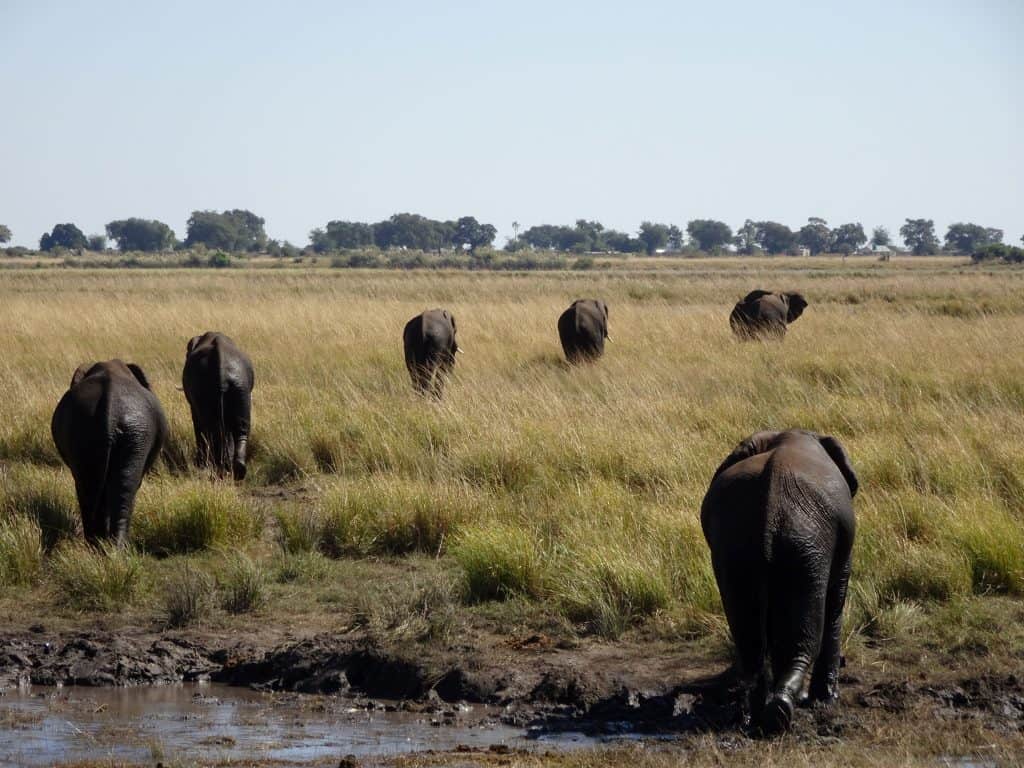 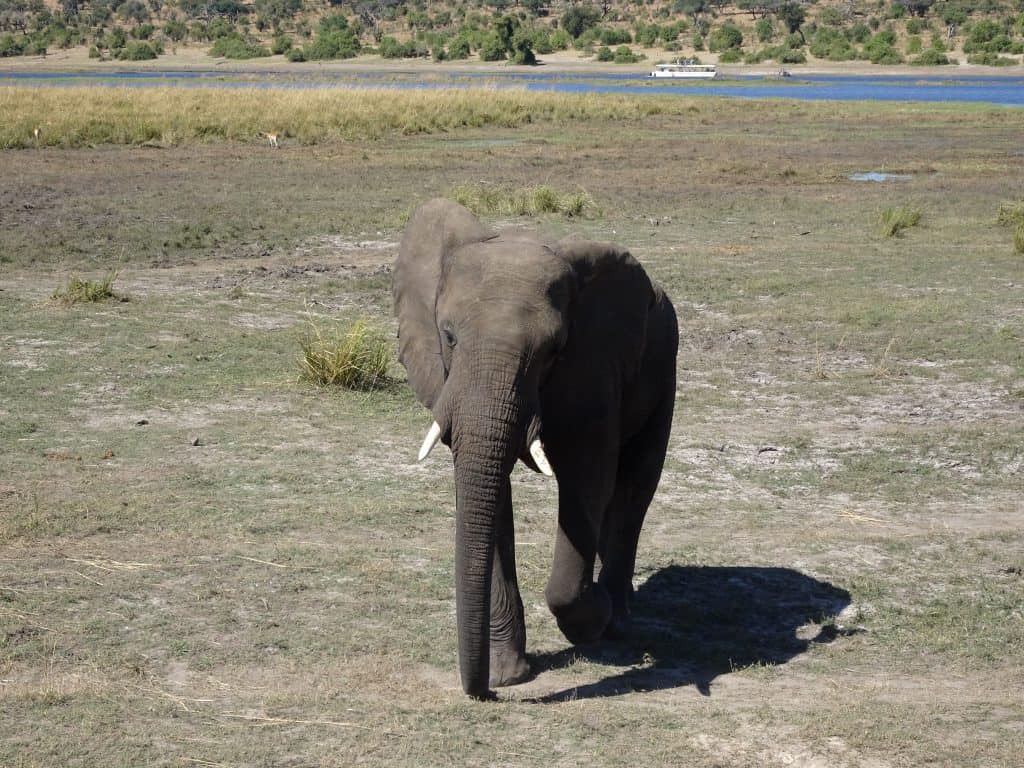 The elephant is challenging our boat. Who’s stronger?

The game drive in Chobe

After lunch we were picked up again by our driver, this time in a safari-ready open jeep. We all settled in and grabbed our cameras, and he took us a short way down the road to the entrance to Chobe, and then into the National Park itself.

Now we got to see everything from the land-perspective. We drove down to the river again for a while, where we encountered some more elephants. But now, there were also a lot of giraffes around, as well as impalas, kudu, and warthogs.

After a while we left the water behind and headed further inland, always on the lookout for animals. Besides plenty of giraffes and antelopes, we also spotted a jackal at some point.

And the elephants! They are really very common in this place, and it’s not unusual to encounter them right next to the road. There was a family group spread out on both sides of the road, and we stopped right between them. One of the elephants passed very close by our car, prompting our guide to assure the nervous tourists that it’s okay, elephants don’t eat meat…

There were plenty of elephant babies too, at this time of year, which were so adorable! The adults try to keep them in the middle of the herd for protection, but we still got some good looks. 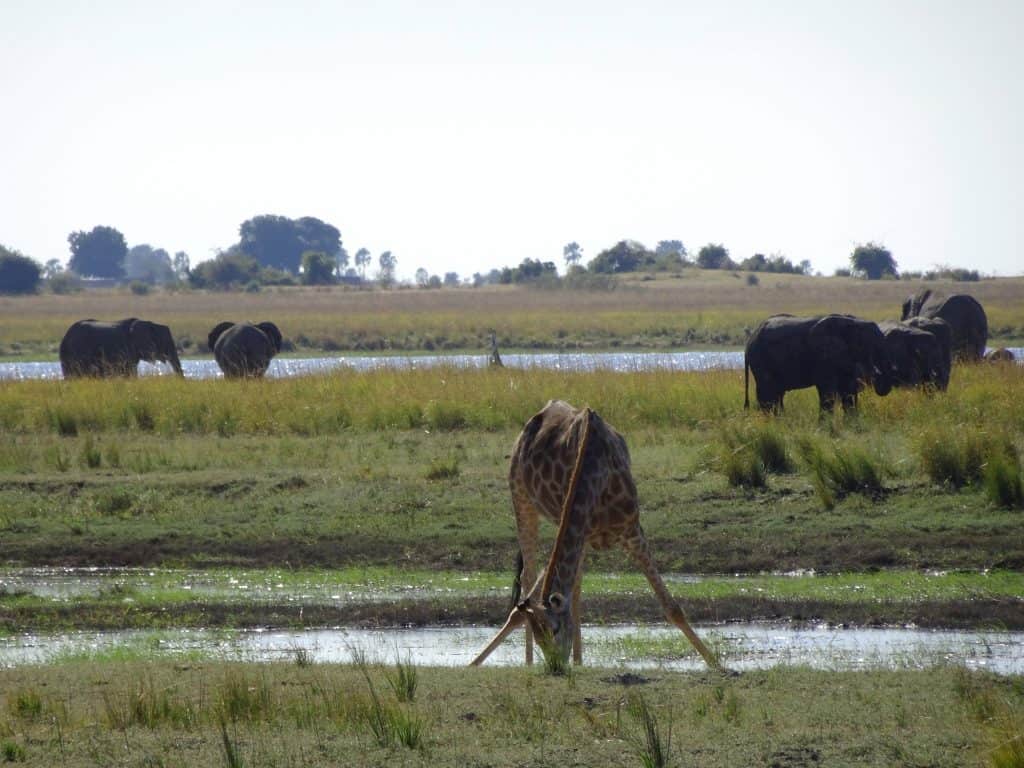 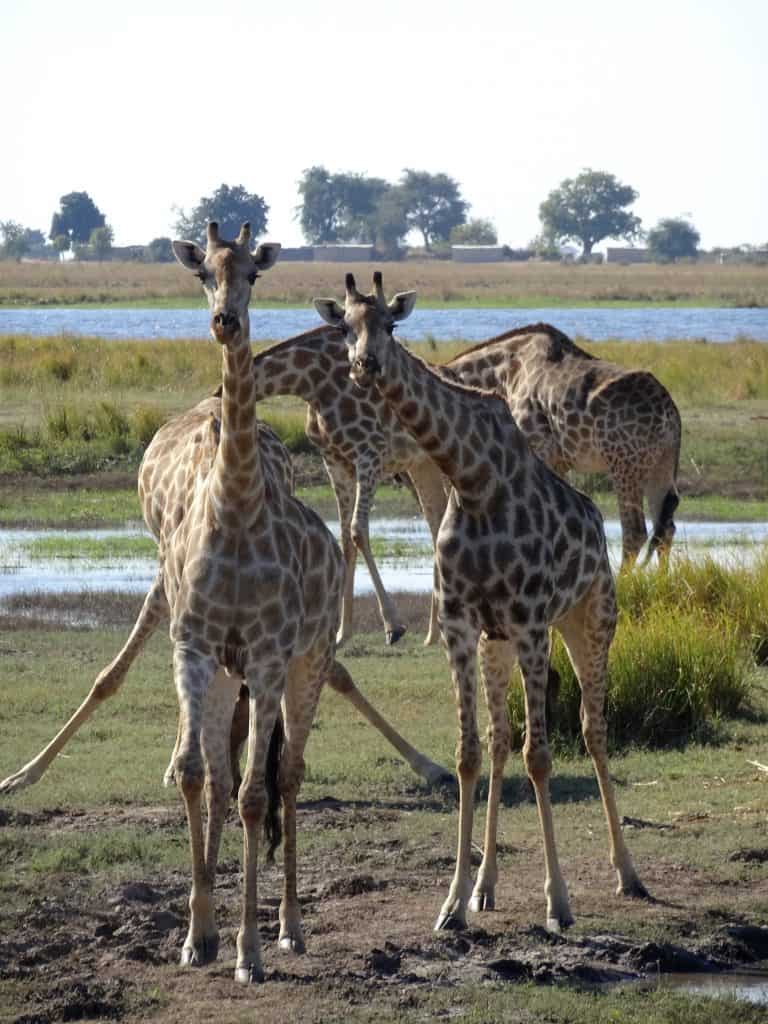 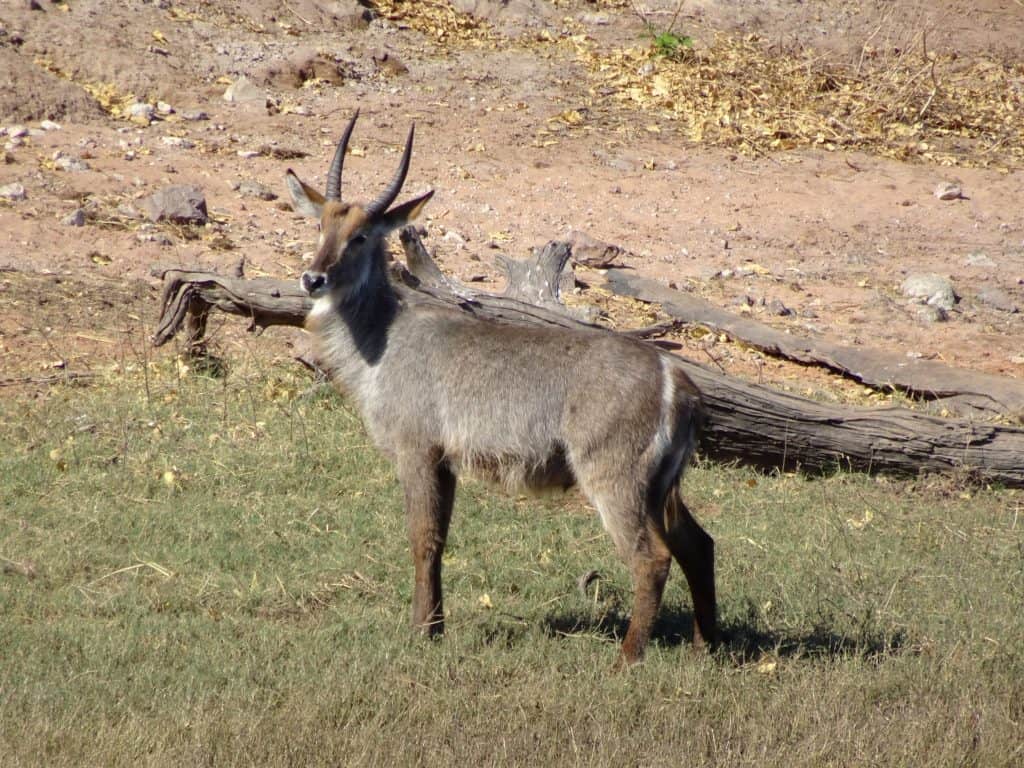 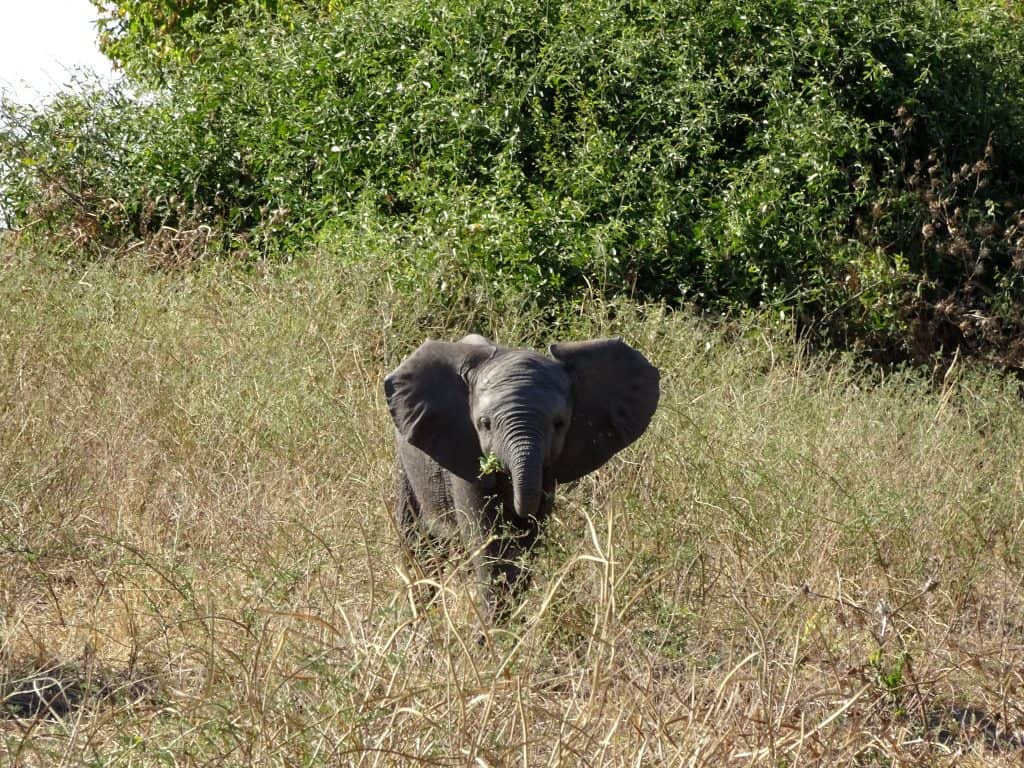 First Africa safari rule: appreciate what you get

One kind of animals we didn’t see at all was big cats. And I had really been hoping for a lion! Already during the game drive we kept saying that this is the one animal we really still need to see. But it wasn’t meant to be. I also missed out on big cats at my second safari-destination, the Rhino Sanctuary in Serowe.

However, there were so many animals I did see on this day trip, I wasn’t capable of disappointment. The day had been way too amazing for such a negative feeling.

And what can I say, we even ended up being caught in another baboon family on the way back to Vic Falls. That’s not something that could ever happen to me at home, so no way I could be disappointed about anything that day.

Chobe National Park is situated in North-Eastern Botswana and one of the country’s main tourist destinations.

There are plenty of tour companies offering day trips. I went with Africa Zim Travel from Victoria Falls. It was 150 US-Dollar, including transport to Chobe and back, the boat ride and the game drive, lunch, and refreshments while on the boat. However, there are many other companies offering these day trips and they don’t differ much. In fact, on the boat we were thrown together with many people from other tour operators.

Potential visa fees for crossing the border are not included in the price. Make sure your visa covers the stay in Botswana and the return to Zimbabwe.

You can do similar day trips to Chobe from Kasane in Botswana, the nearest town. Or you can go to Chobe for several days, including staying overnight in the National Park. If I’d had the time, I would have loved to do this. 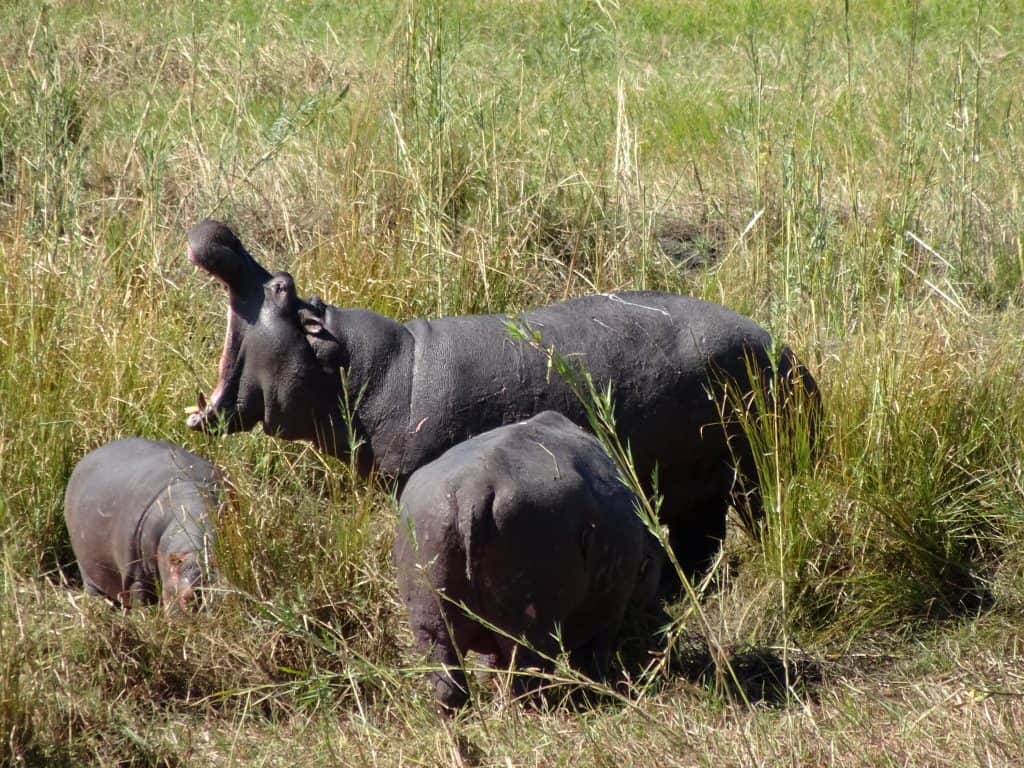 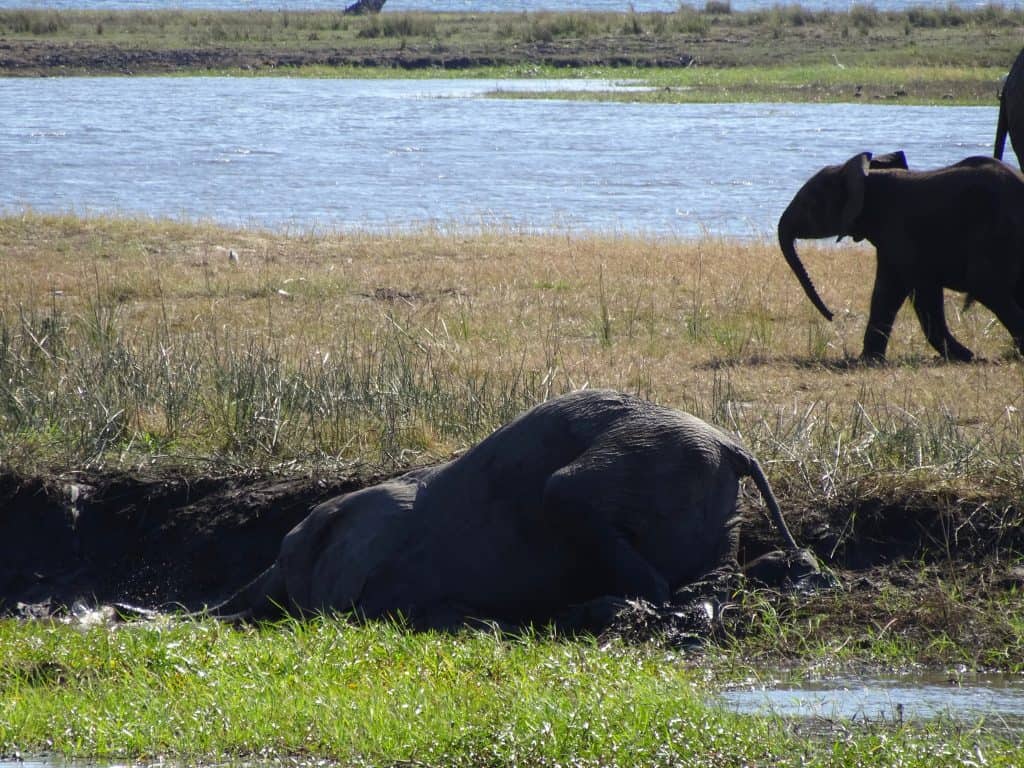 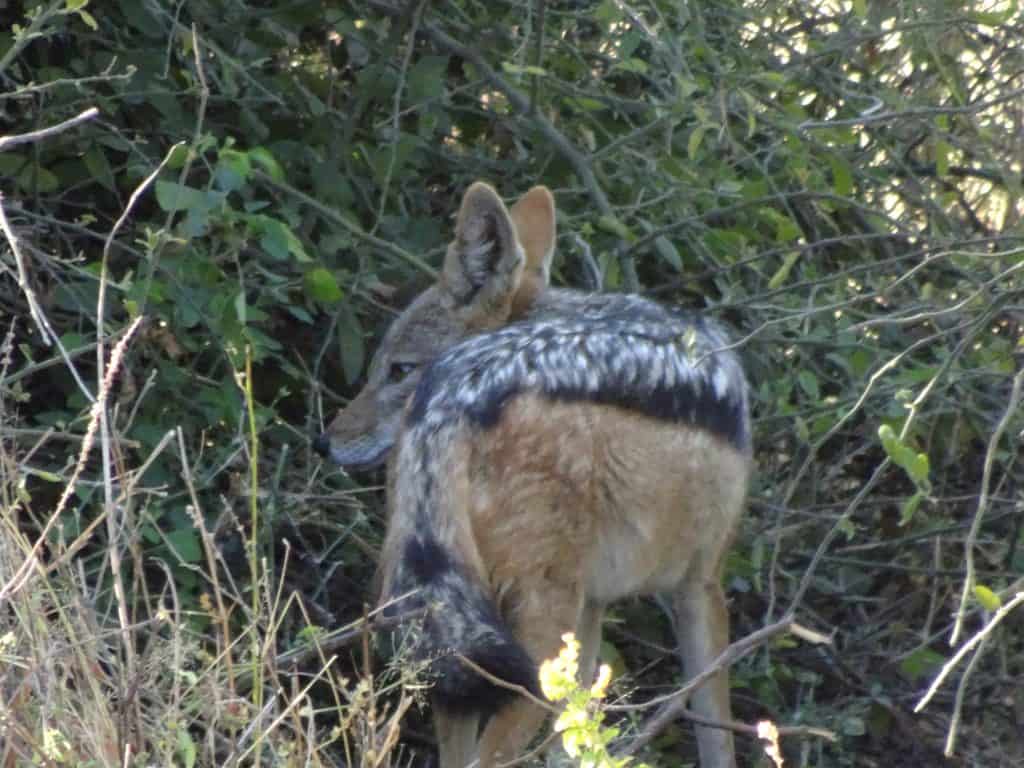 Have you ever been on safari? Where was it, and what was it like? What do you think of Chobe? Share in the comments. 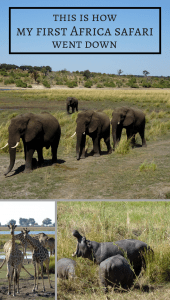