How to deal with things going wrong on the road

We travel bloggers always like to talk about how great our travels are. We post beautiful pictures from our destinations and describe all the highlights. But of course, travel isn’t always perfect and fun. Last week I already wrote about a trip to Western Australia that had a lot of things going wrong. Stuff like that happens all the time, and while it by no means has to spoil a holiday completely, it can be the cause for a lot of annoyance and disappointment.

Travelling is an activity that is almost by definition inviting the unexpected to happen. This can take shape in a lot of different ways. Maybe you miss out on certain attractions you wanted to see. Some kinds of activity are particularly unpredictable, for example when they include wildlife encounters. Wild animals have a tendency to not always do what you want them to.

But things can also go wrong in the form of delayed flights, broken-down buses, or overbooked trips. I have seen my fair share of undesired events over the years. I want to share some of them with you to show that these things are perfectly natural – but that a change of plan does not have to equal a loss in enjoyment. 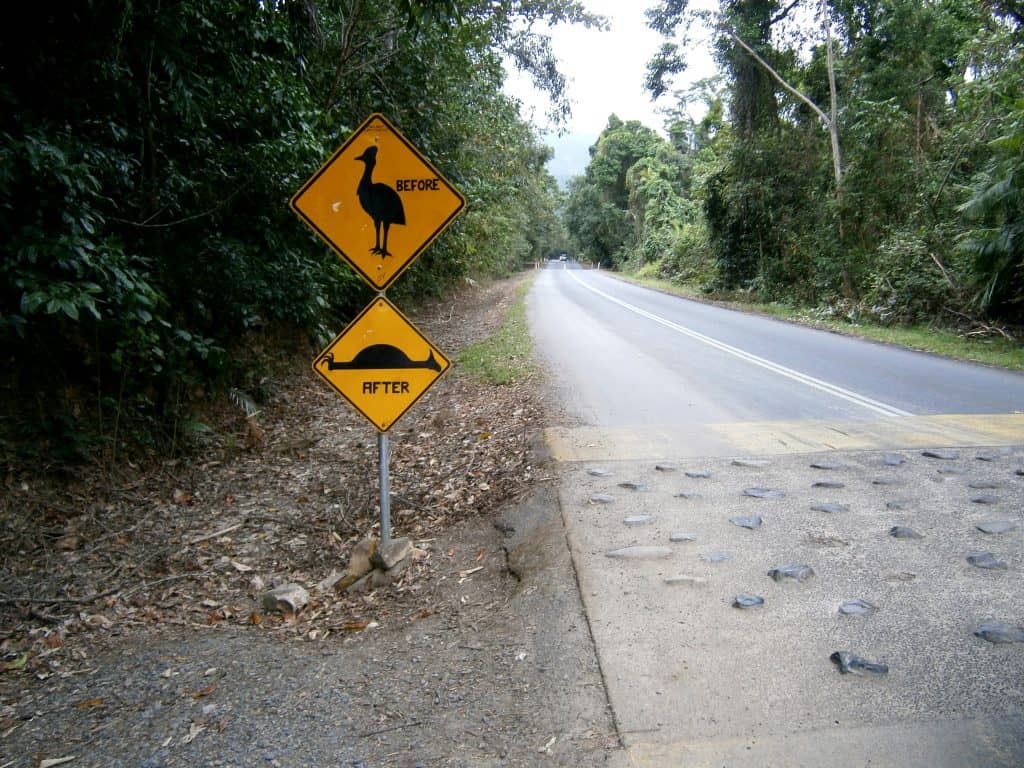 Trouble with the transportation

I already wrote a post about all the things that can go wrong with planes which you can read here. So I won’t add much on that topic. But planes are not the only mode of transport that can be unpredictable at times.

I was on a bus tour down the Australian East Coast a few years back, and we went through no less than 3 buses during those 10 days. The first one broke down up in Daintree NP. The tour company had to send another bus to pick us up and take us back to Cairns. There we exchanged it for yet another bus that was meant to take us the rest of the way down to Sydney. And guess what? It broke down as well! Though at least this time it wasn’t permanent and we could continue our trip after some waiting on the roadside.

Despite all of these bus disasters, I think back to this trip with nothing but good memories. Sure, it’s annoying in the moment when it happens. But then, trying to push a whole bus down the road in the middle of the rainforest is not something that everyone can boast to have done. It certainly provides you with some great stories. 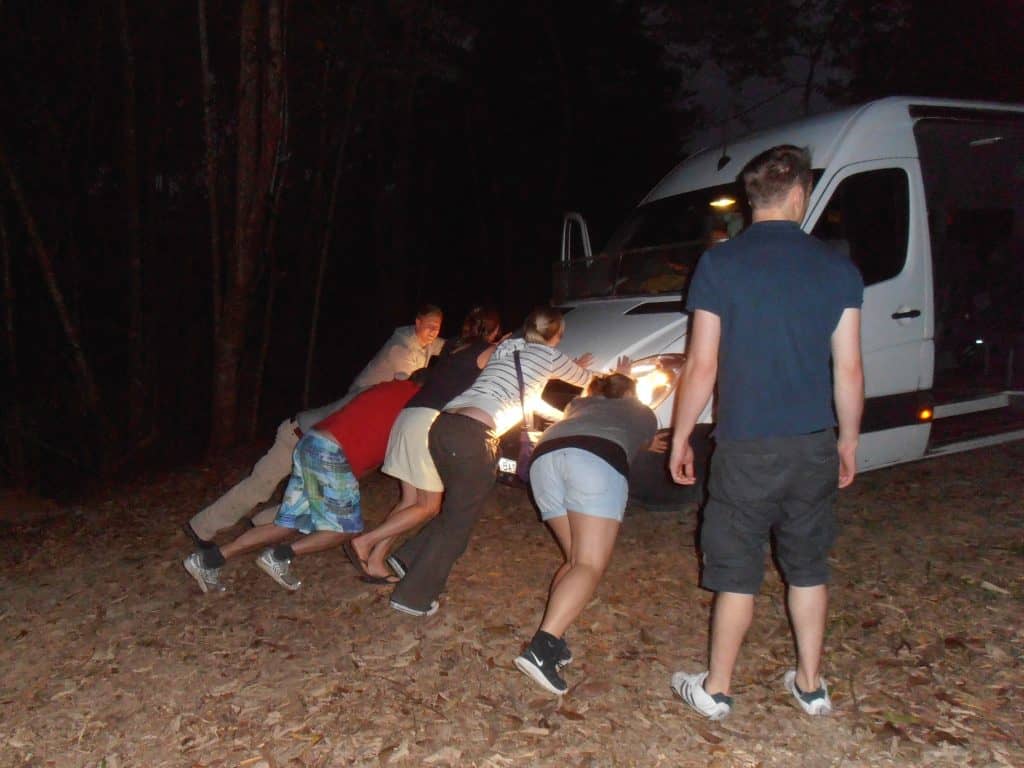 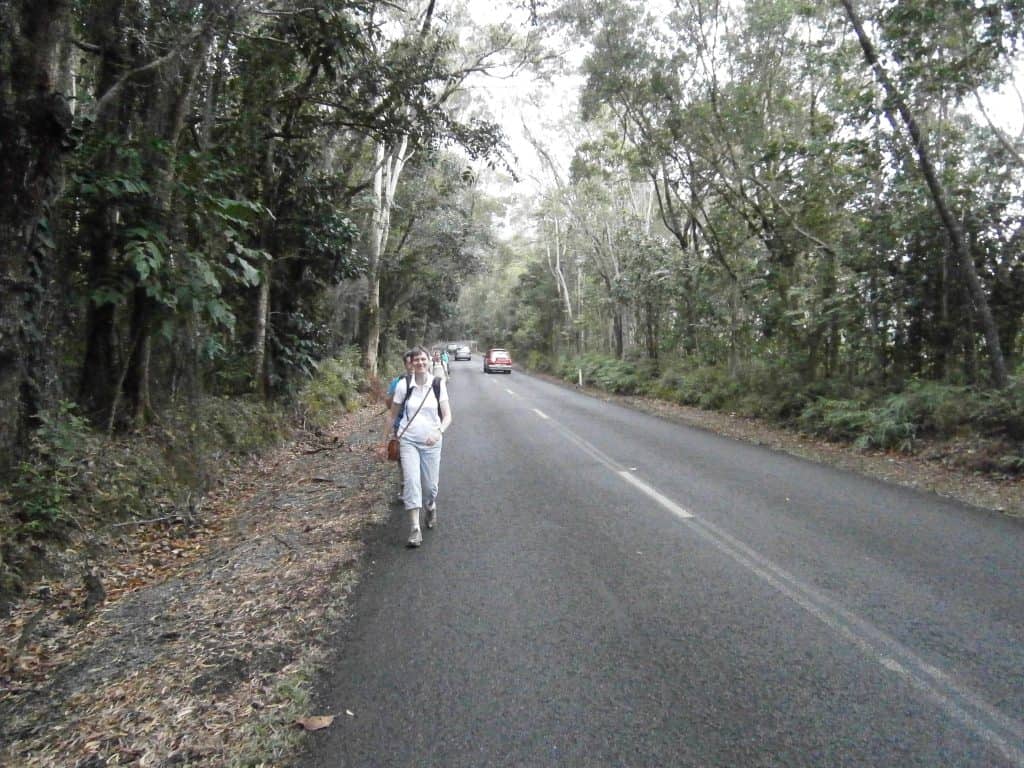 Walking towards the pickup point for next bus 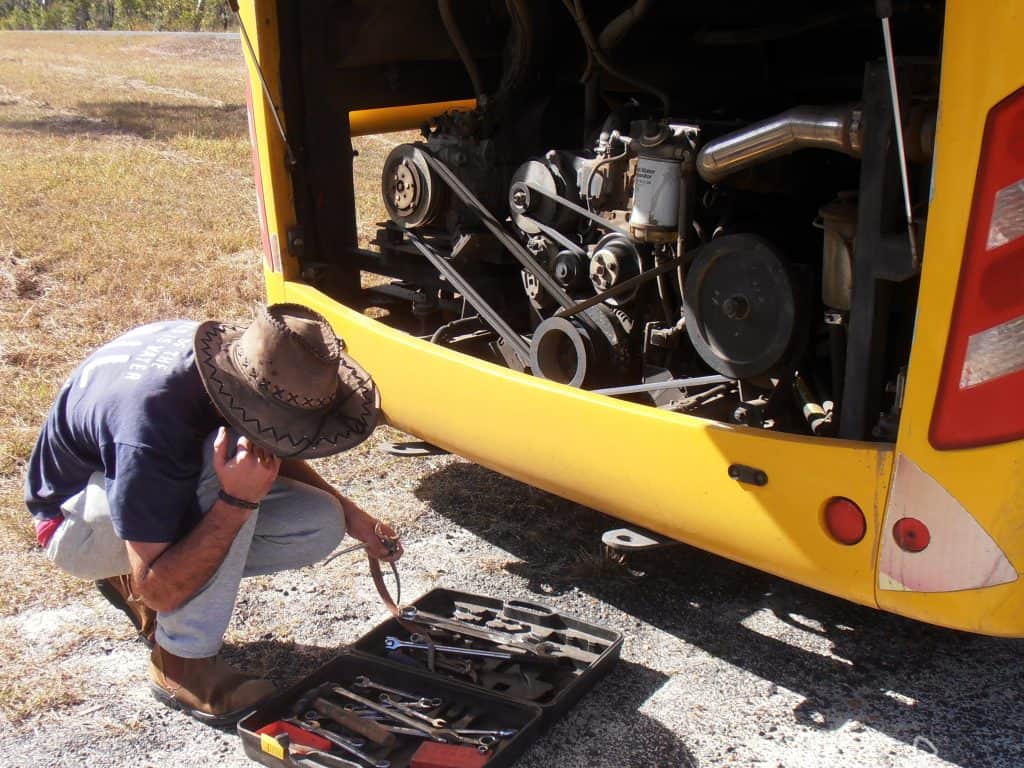 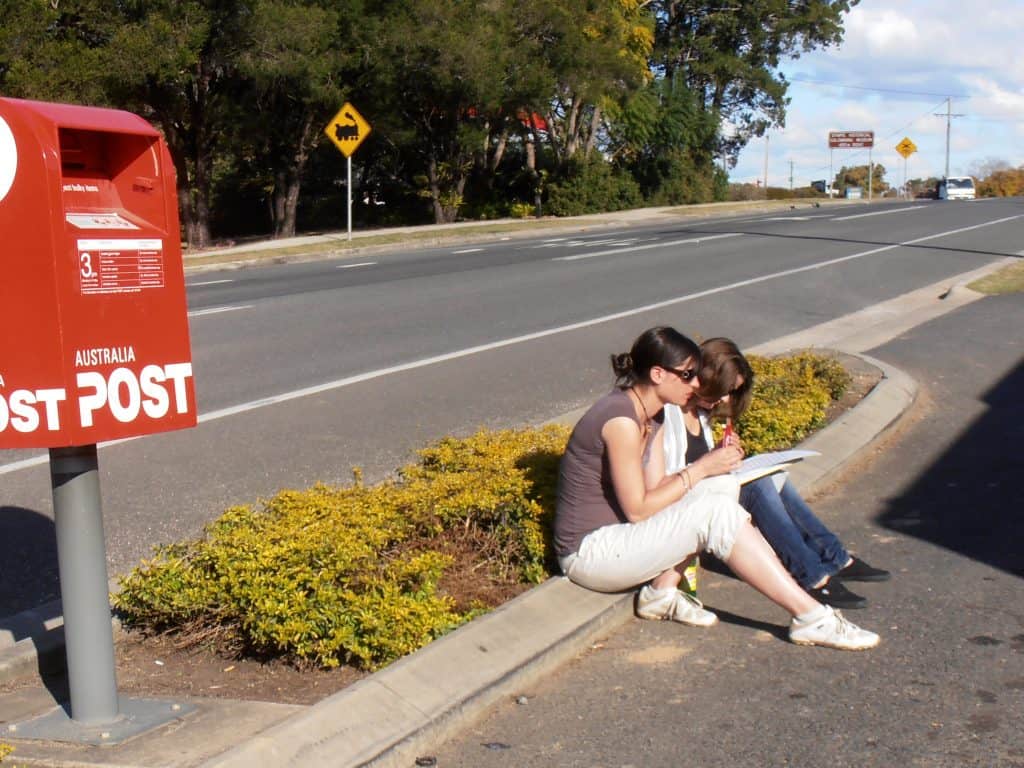 Waiting for the bus to be fixed

Don’t be afraid to ask for help

It would admittedly have been a lot worse if we hadn’t been on an organised tour. When you’re self-driving there’s no one to quickly provide you with a new vehicle. But even then, I have found people are usually more than helpful.

On a different trip, also on the Australian East coast but this time with a rental car, we went down an unpaved road and weren’t sure if our car could take it. When we stopped and decided to turn around, someone else pulled up behind us immediately and offered to follow us down the road and drag us out should we get stuck. We declined, preferring not take the risk, but it shows you how helpful people generally are.

Weather is probably one of the least predictable things on any trip. Which is the more reason to never let it spoil your holiday. Some examples of my experiences:

Istanbul was so highly covered in snow, the cab couldn’t make it to our hotel because it was located up a hill. So we had to walk down the ice-covered street with all our luggage. The snow also led to flights being cancelled and us having to stay an additional day.

Also in Istanbul, we climbed up to a well-known lookout over the Black Sea, only to find we couldn’t see a thing because of the fog.

In the Black Forest, many years ago, there was a huge storm that fell some trees. They landed on the streets and cut us off from the next village until the roads were cleared. Also I have had hurricanes, floods, and heat waves on past trips.

Weather ist one of those things that it’s not worth getting all upset about. You can’t change it anyway. So my advice is just make the best out of it. If it’s cold and wet outside, go to a museum or snuggle up in a cute cafe. Somewhere that’s inside and dry. If it’s hot and stiff, find a pool to jump into. And if the lookout is covered in fog – well, bad luck, but at least you can take a silly selfie in front of it. 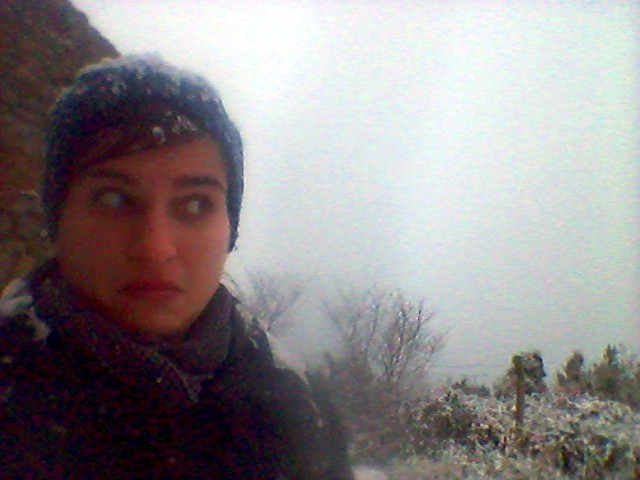 There should be something to see behind me… 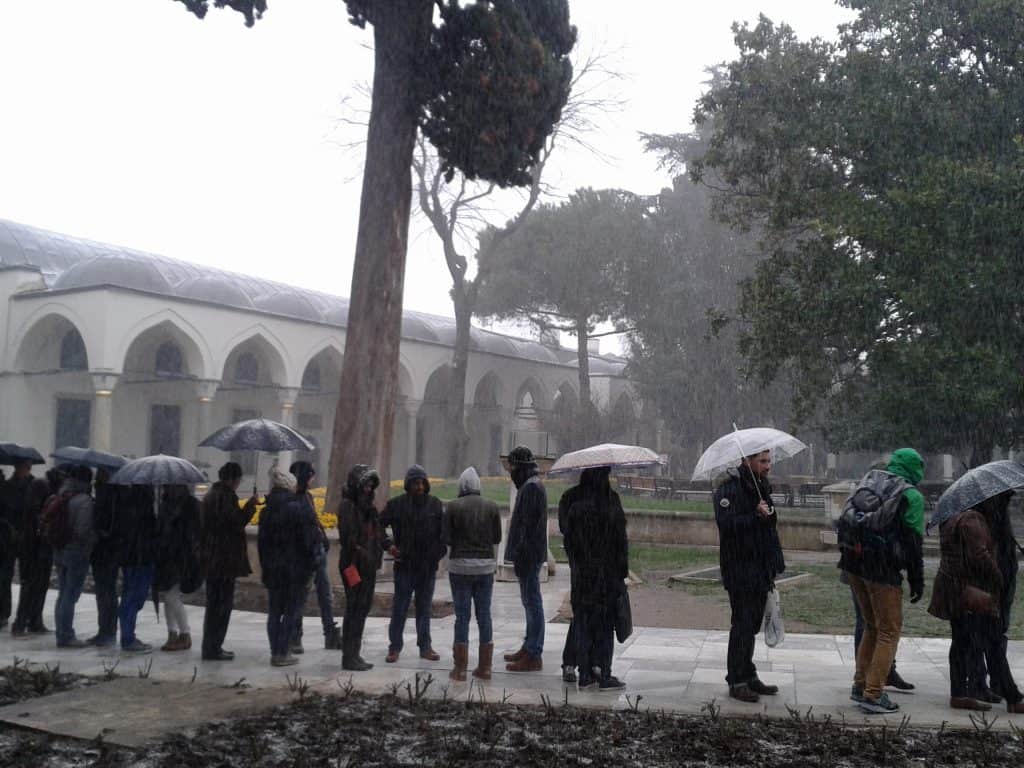 Topkapi Palace in the rain

I got lost many times on my travels, and in most cases it’s not a problem. There are many travellers who actually advice you to get lost on purpose when exploring a new city, because that’s how you find all the hidden gems.

However, sometimes getting lost can also be scary. Maybe it happens at night, when it’s dark and there are no people around. Maybe you suddenly find yourself in a shady part of town and you don’t know how to get out again.

Being in strange places can be scary. Sometimes it only takes a moment for the feeling to change from exciting and new to foreign and sinister. And while some of these times it’s more in your head than because of any real threat, you should listen to your intuition. If a place doesn’t feel right, for whatever reason, then leave. And that’s really the best advice I can give. Retrace your steps. Find a taxi, or a bus. Or go to a restaurant or hotel and ask for directions. They can probably also call you a cab, if you need one. 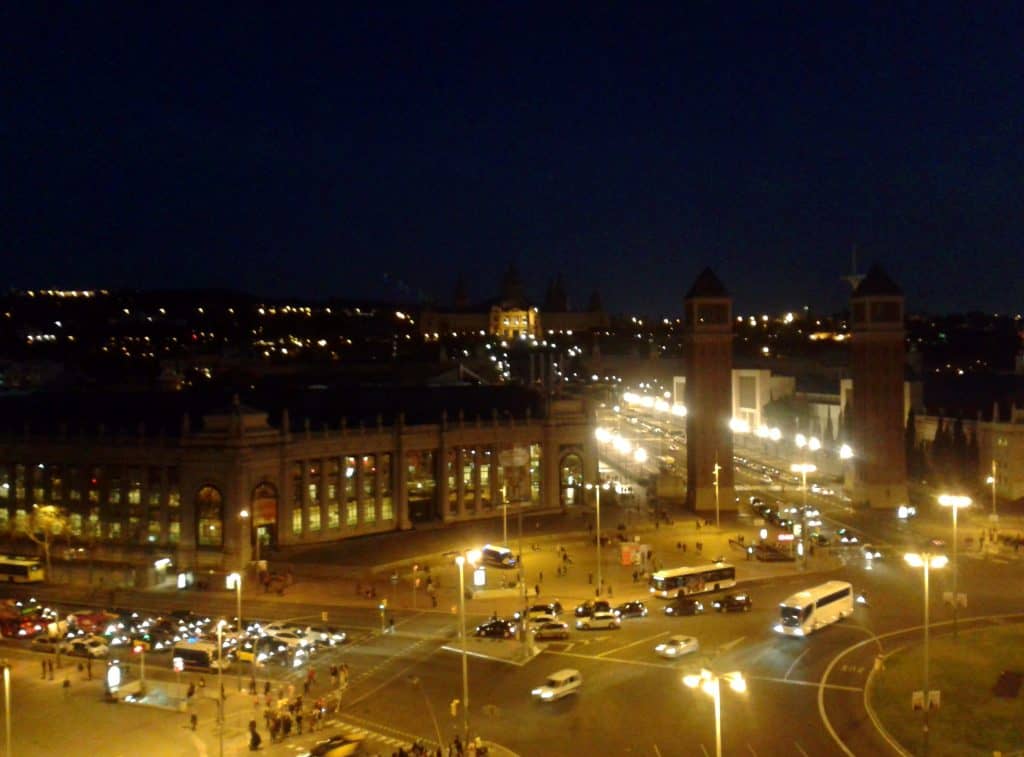 I have been lucky enough to never be a victim of crime on any of my travels, not even pickpocketing. Still, there have been moments when I felt anything but safe. However, those moments can also happen when I’m home. They’re not exclusive to travel, and often don’t say anything about the objective safety in a certain destination.

I believe that if you stick to some general safety rules and use your common sense, travelling isn’t nearly as dangerous as some people or the media want to make you believe. 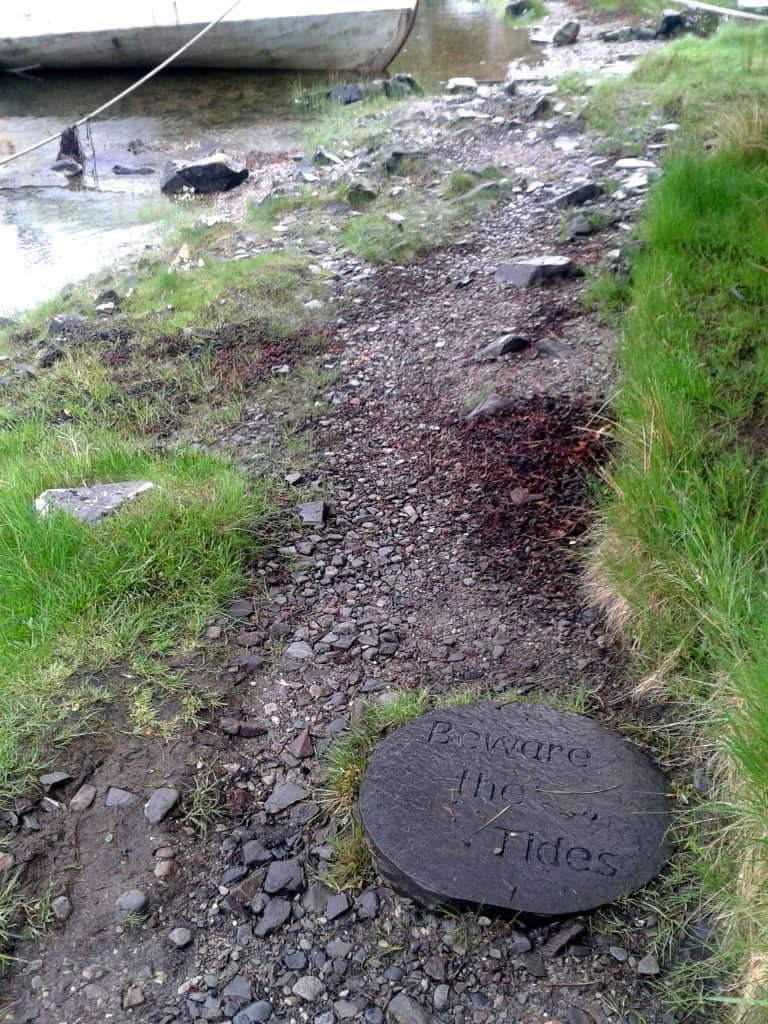 It’s natural to concentrate on the positive when relating your adventures, but that doesn’t mean no bad stuff ever happens. That’s just part of the whole experience. In a lot of ways, travel is representative of life. You cannot plan it. You can never be prepared for everything that might happen, good or bad. All you can do is chose a destination, and struggle on when life (or the airline, or the weather) throws obstacles in your way.

It’s never how you imagine it, but that’s exactly what makes it so exciting. It’s surprising, and unexpected, and challenging, and sometimes frustrating, but always an adventure. 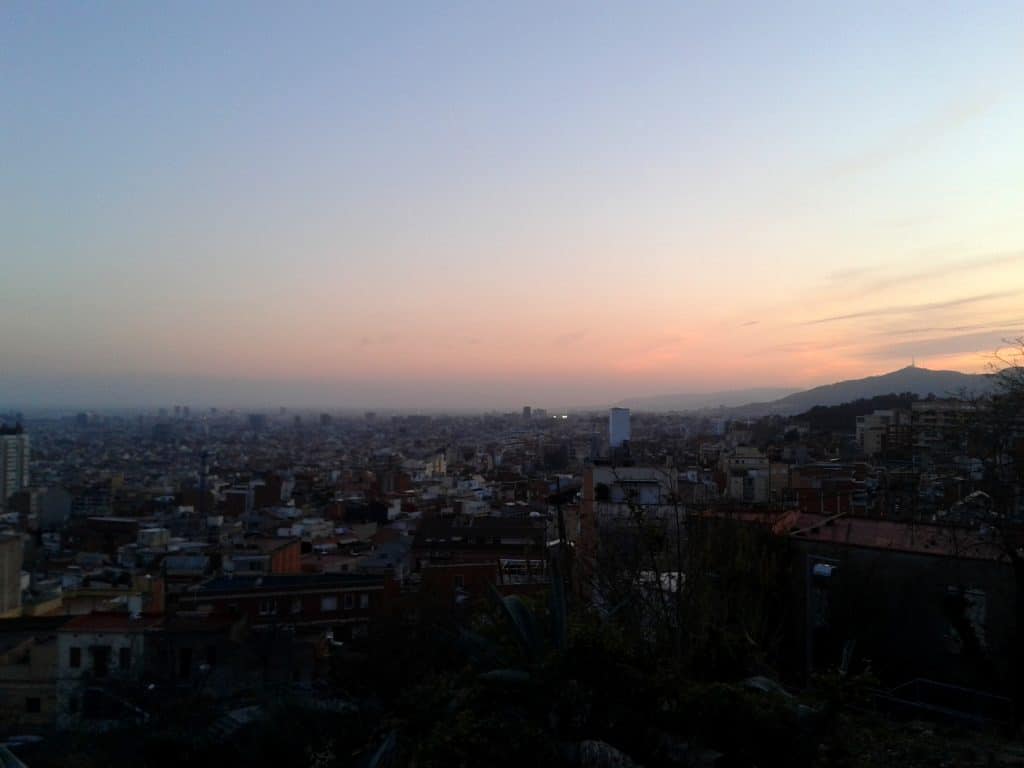 What catastrophes have you encountered on the road? How did you deal with it? I’d love to hear your stories in the comments! 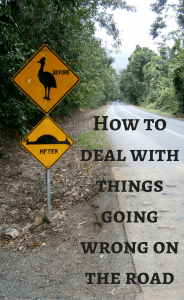