Warning: Parameter 2 to wp_hide_post_Public::query_posts_join() expected to be a reference, value given in /home/customer/www/globalintrovert.com/public_html/wp-includes/class-wp-hook.php on line 292
 Coming face to face with rhinos in Botswana • Global Introvert Skip to content

Coming face to face with rhinos in Botswana

Seeing rhinos in Botswana is no easy feat, because they are very rare animals in this country. They are almost extinct, except for one place: the Khama Rhino Sanctuary near Serowe. I spent two nights there during my recent Africa trip to see these beautiful animals.

We stayed in a little chalet right in the middle of the Park. As we didn’t have a car there wasn’t any way for us to get around; you’re not supposed to walk off too far on foot because of the animals. So for two days, our world consisted of our chalet and the restaurant only a few metres away – and of course the game drives! It was the most relaxed days I had in Africa, and at the same time they had some of the most exciting moments! 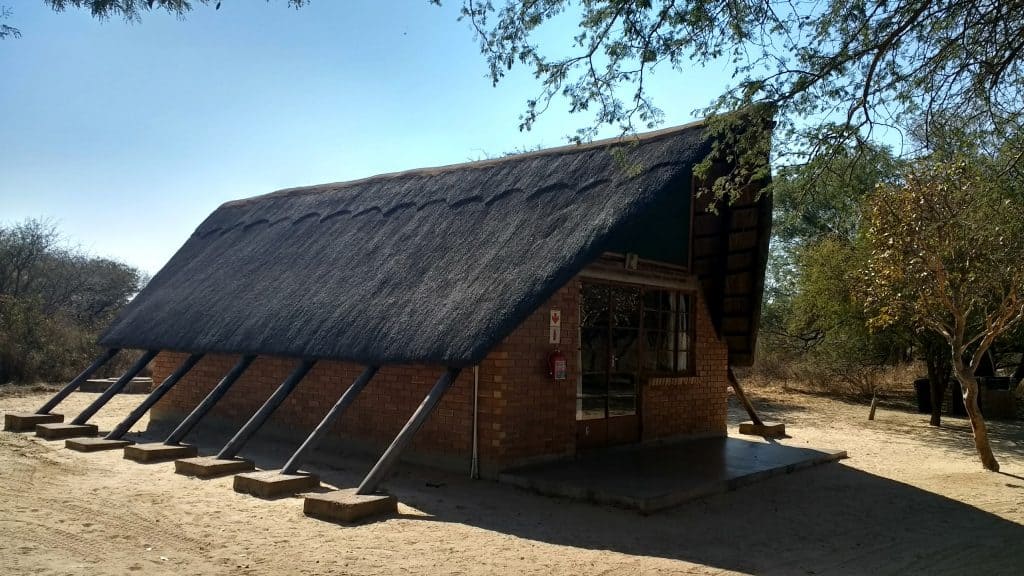 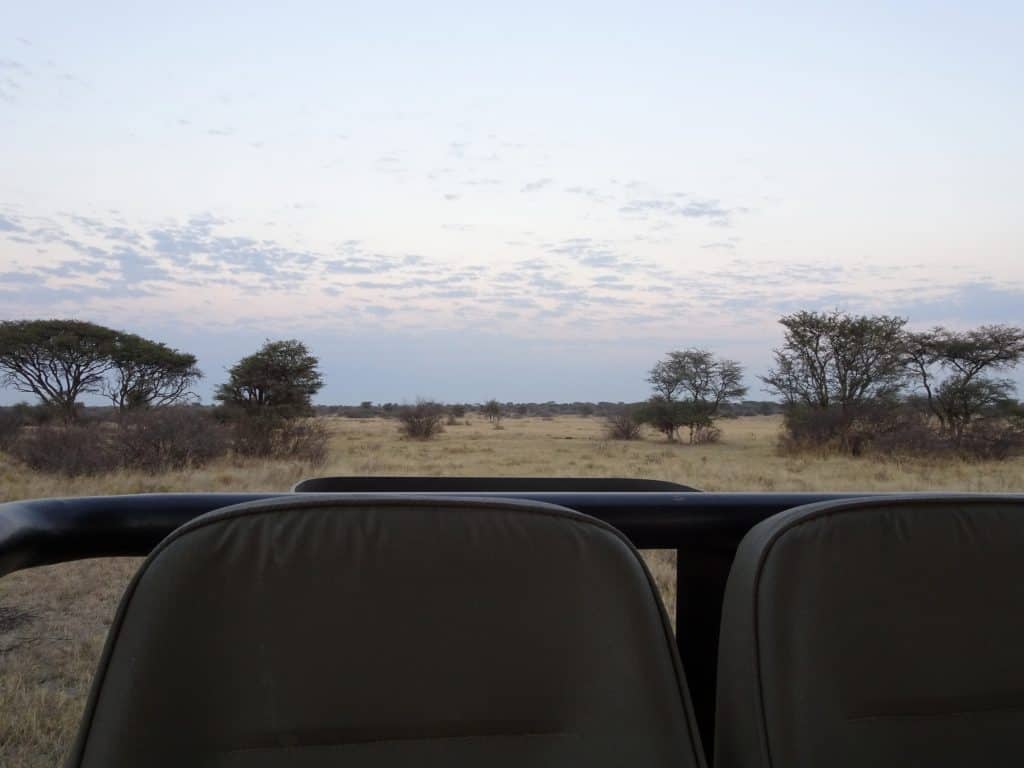 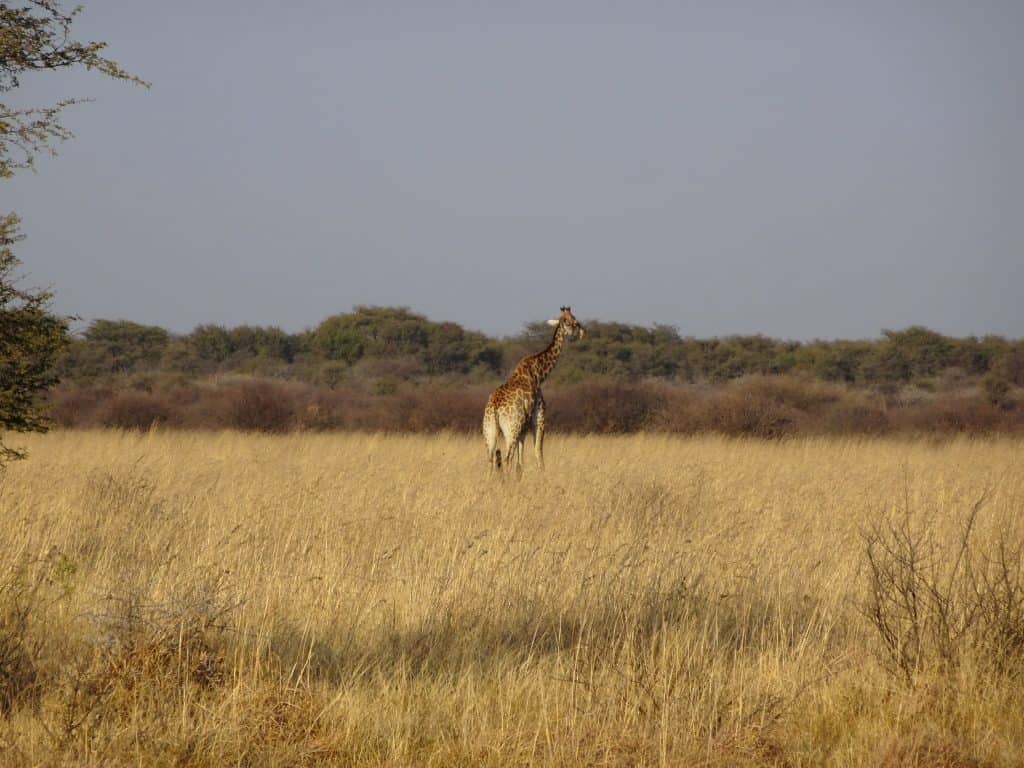 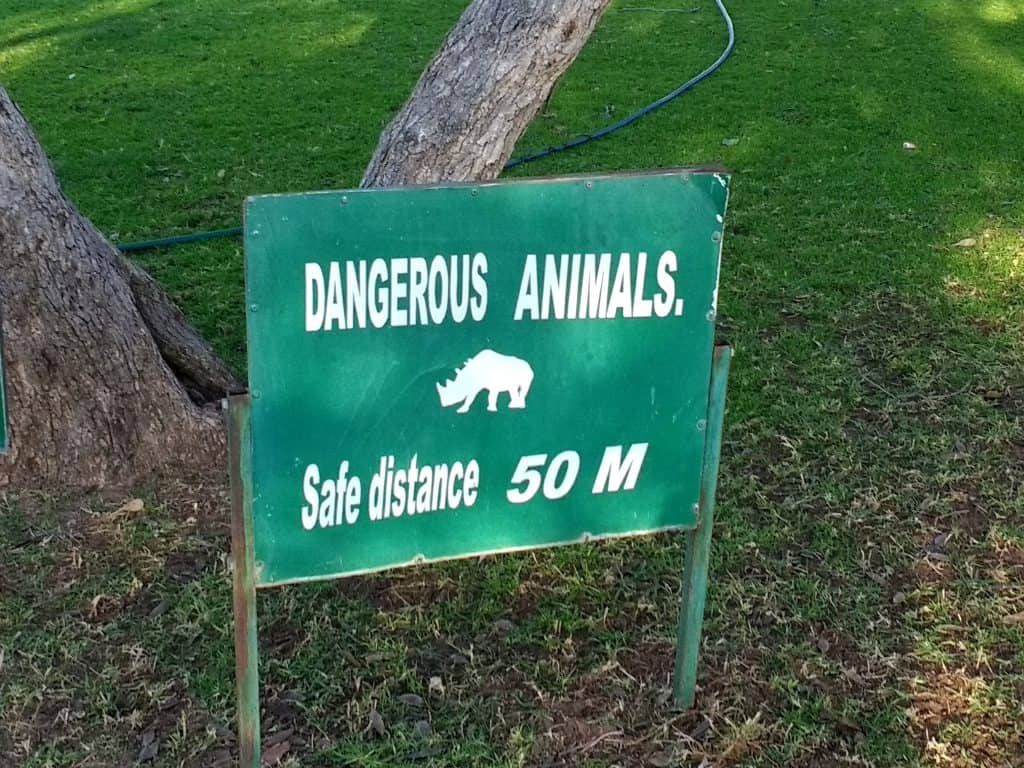 The night drive: collision course with a rhino

On the day we arrive we get picked up at 7pm from our chalet for our first game drive. It’s already dark at this time, and very cold. It’s winter in Africa, after all. We all wear several layers of clothing and bundle up in blankets on top of that, and still we’re cold. But oh, it’s so worth it!

We’re not out long when we round a corner and find ourselves right opposite a rhino standing in the middle of the road. A couple more are off to the side in the bushes. This is my first rhino, and I can’t believe how close it is!

After we’ve all taken plenty of pictures and had ample time to gaze at the white rhino, it suddenly turns around. It must have been startled by something, because it comes running at our car at full speed. We all see it crashing into our car already, but at the very last moment it swerves off to the side and disappears in the bushes. According to our guide rhinos have very poor eye-sight, so possibly it didn’t see us properly until the last moment. However, I’m glad we didn’t crash! 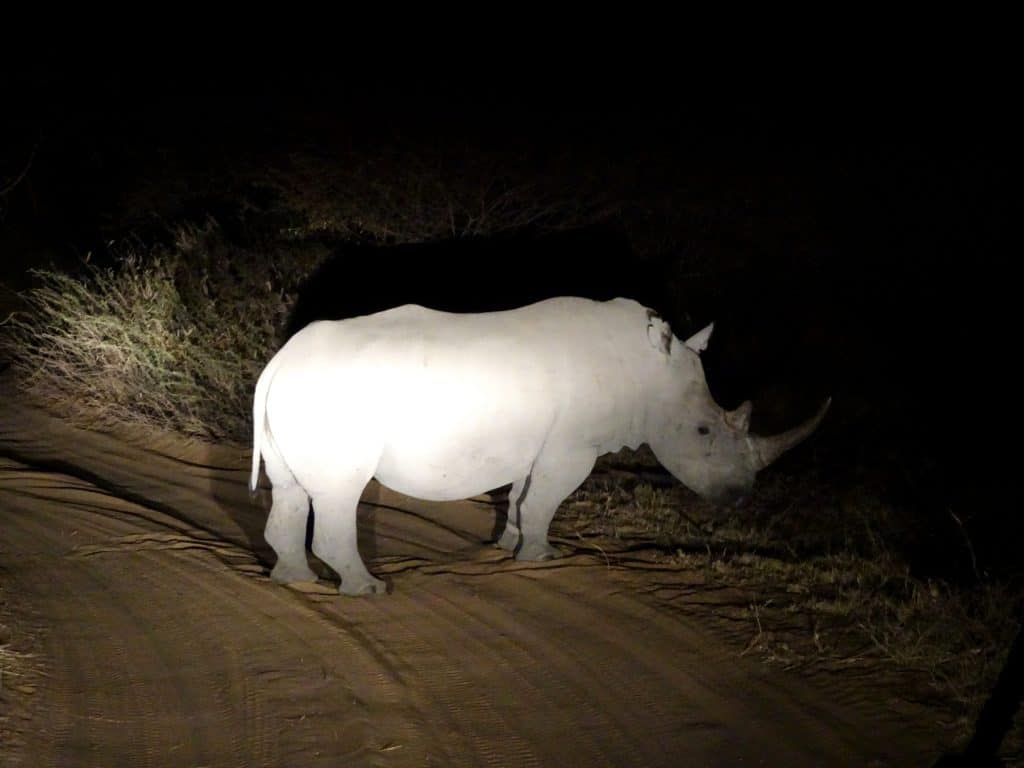 The rest of the game drive has fewer shock moments, which is probably good for all our nerves.

We see plenty more white rhinos, which are more common than their black counterparts. They have about 50 white rhinos here, and only about 10 black ones. They breed them and then resettle them in other wildlife sanctuaries and National Parks around Botswana.

We also spot a lot of other animals: impalas, waterbuck, springbok, wildebeest, hartebeest, African hares (also called Africa kangaroo, because of the way they hop), and kudu. All the birds have already gone to bed, but an owl with spooky orange eyes is watching us in the dark.

Once we come across fresh leopard tracks, and our guides spent quite some time searching the bushes where the tracks disappear to find the leopard. But to no avail. It must already have passed on.

After two hours we return to our chalet, frozen but happy. We pay a short visit to the restaurant, and on the way back we encounter a few waterbuck who have assembled on the green between the buildings. In the dark they look a bit like reindeer – or like something created by Disney. What a perfect ending to a great first day! 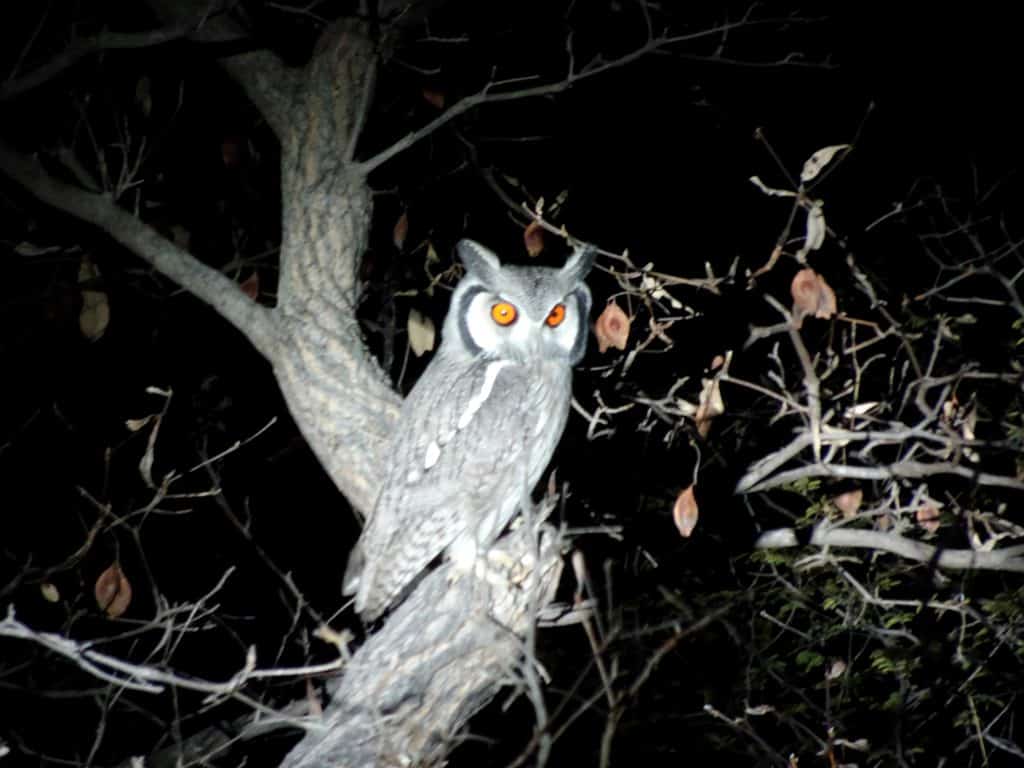 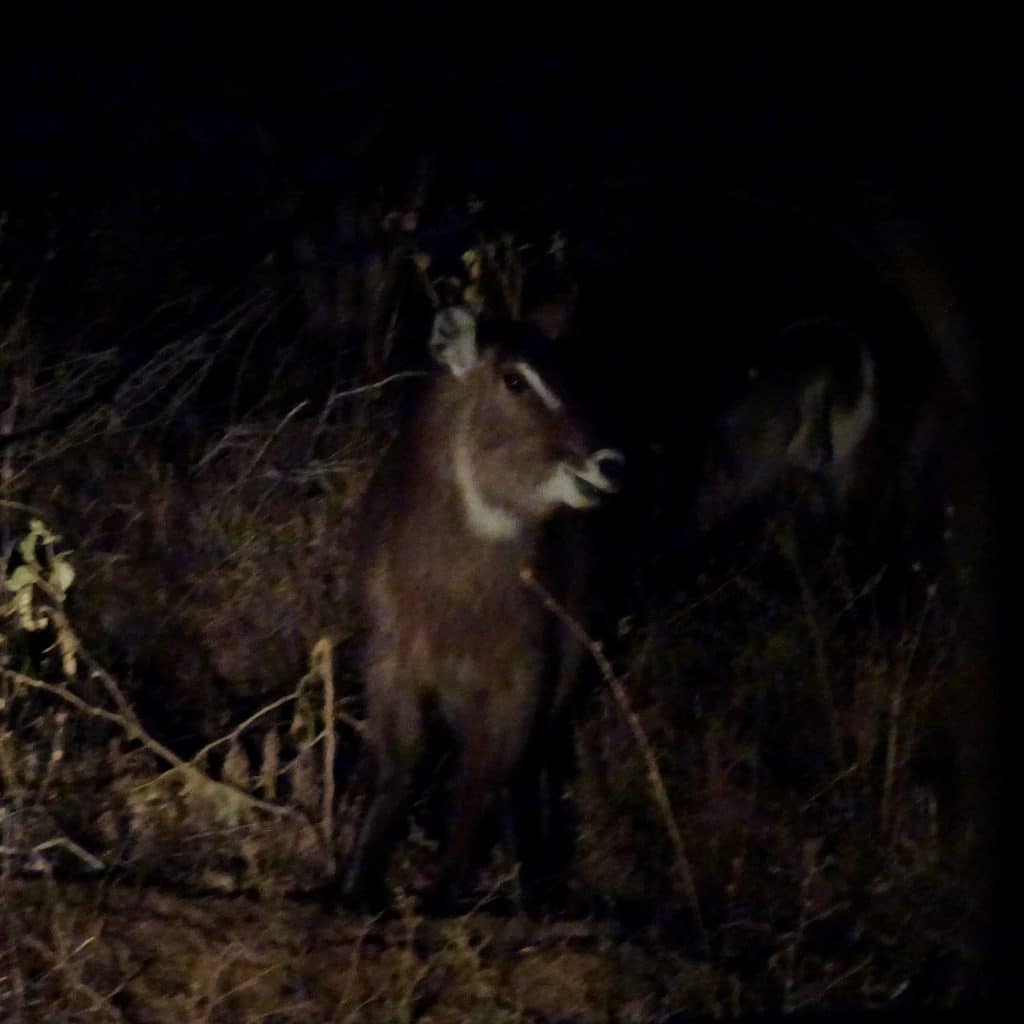 The morning drive: sunset over the savanna

We don’t get to sleep long, because at 6am we’re picked up for our second game drive. It’s still dark when we start out – and no warmer than yesterday – but the sun rises while we are out searching for wildlife.

Again we encounter all possible kinds of antelope, and now that it’s light it’s also a lot easier to take pictures. On top of that we see plenty of giraffes and some ostriches. There are two male ostriches doing a mating dance for the female. Unfortunately they are quite far away and you can only properly see them with binoculars – but what a spectacular sight!

We also meet some more white rhinos. There’s even a rhino mum with her 2-year old baby!

No leopards again though. Which means no big cats for me at all on this trip (I already missed out on lions and all other big cats when I was in Chobe). I can’t really be sad about it, as there were just too many other animals to be excited about.

It’s only 8am when we return to our chalet and find that electricity is out. We move on to the restaurant, where it’s the same. But they’re still able to cook us some breakfast over the stove, and there’s some hot water left so we can warm ourselves with hot chocolate! Breakfast takes a bit longer than usual, but we don’t really have anything else to do for the rest of the day. 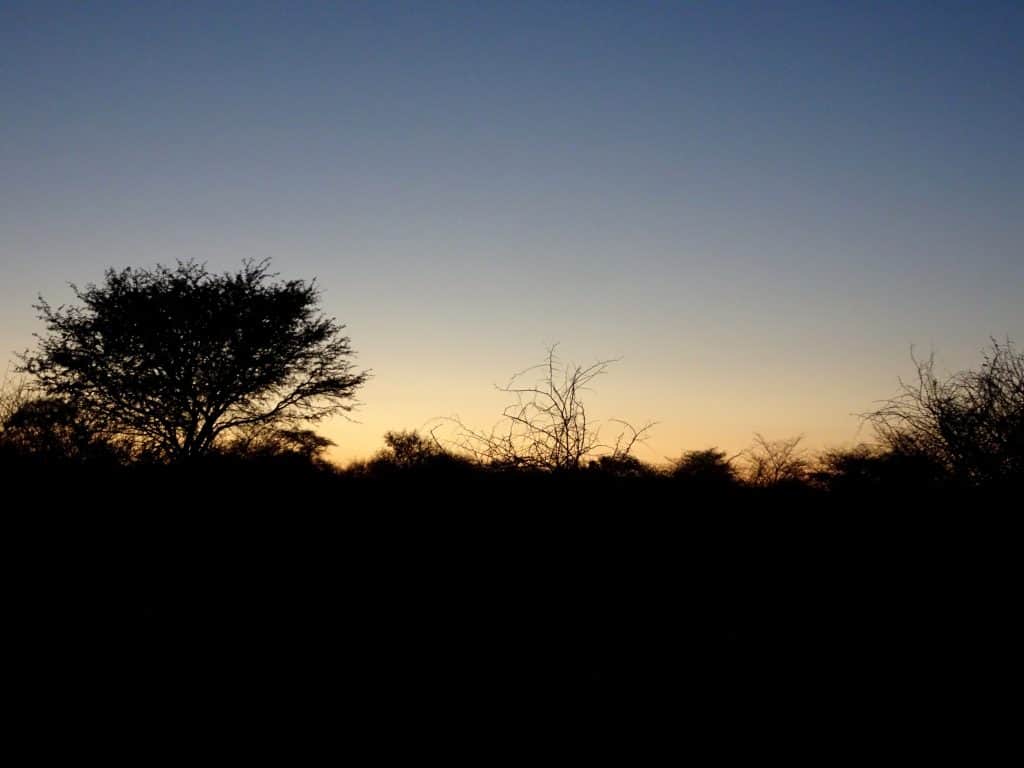 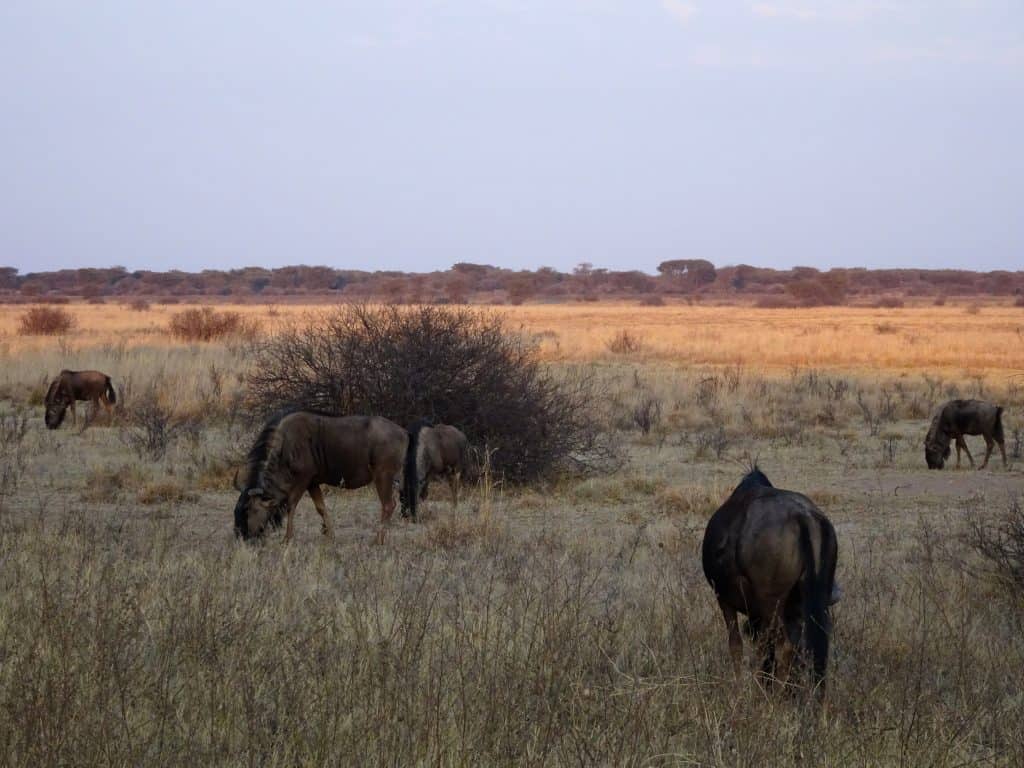 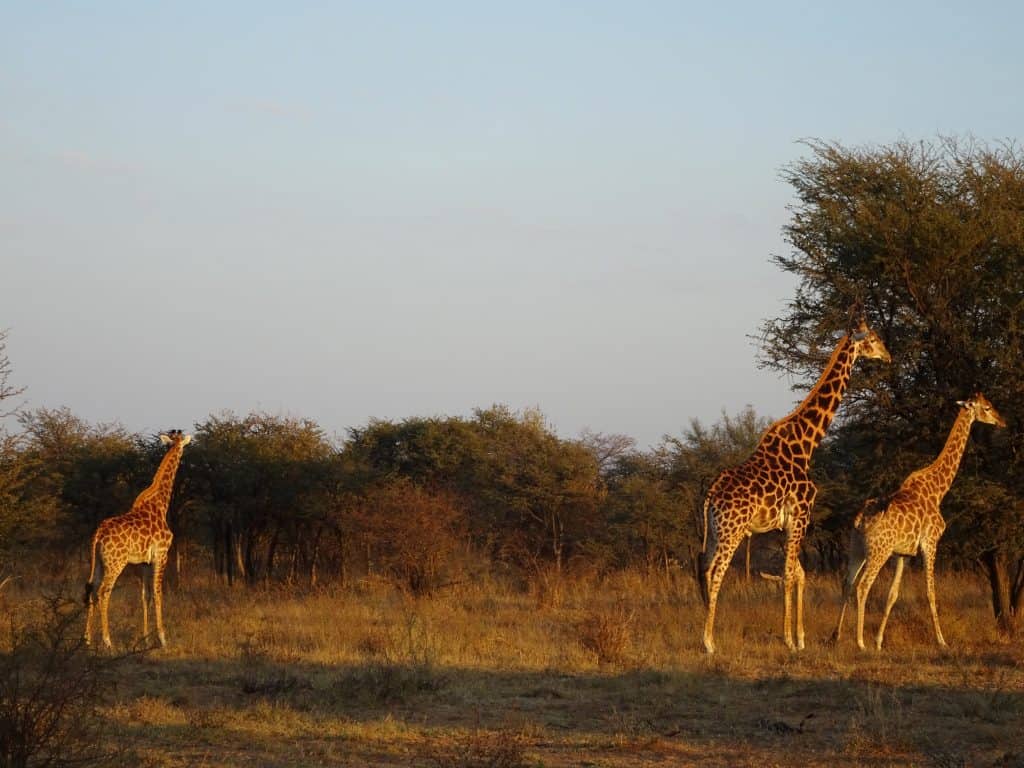 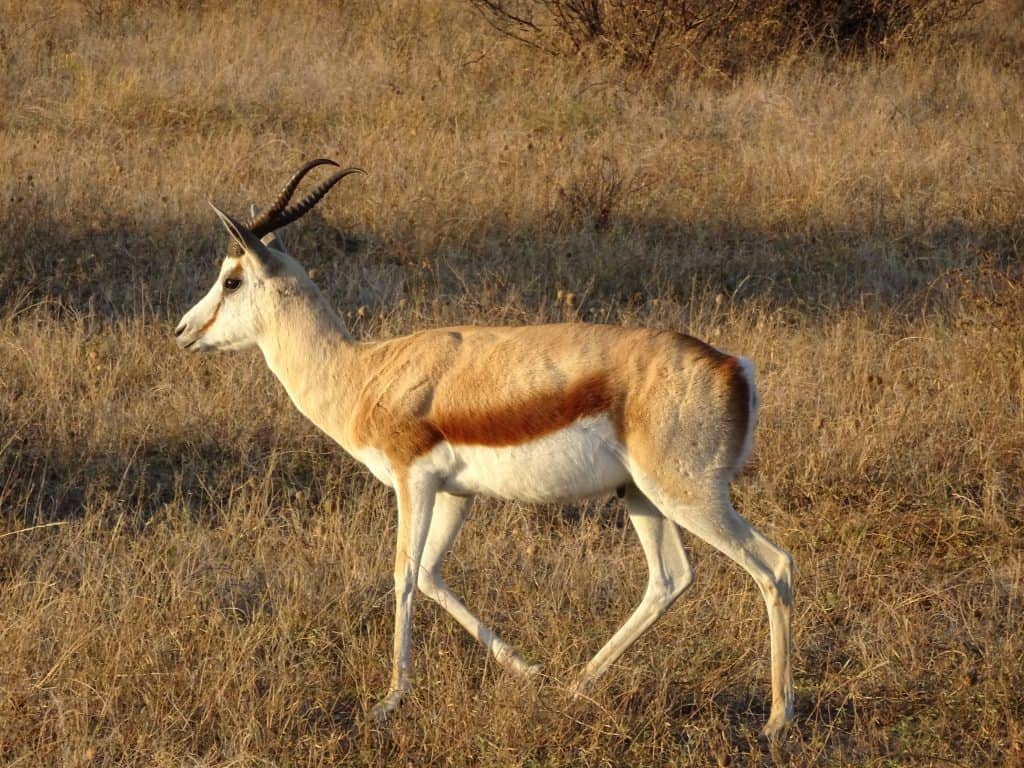 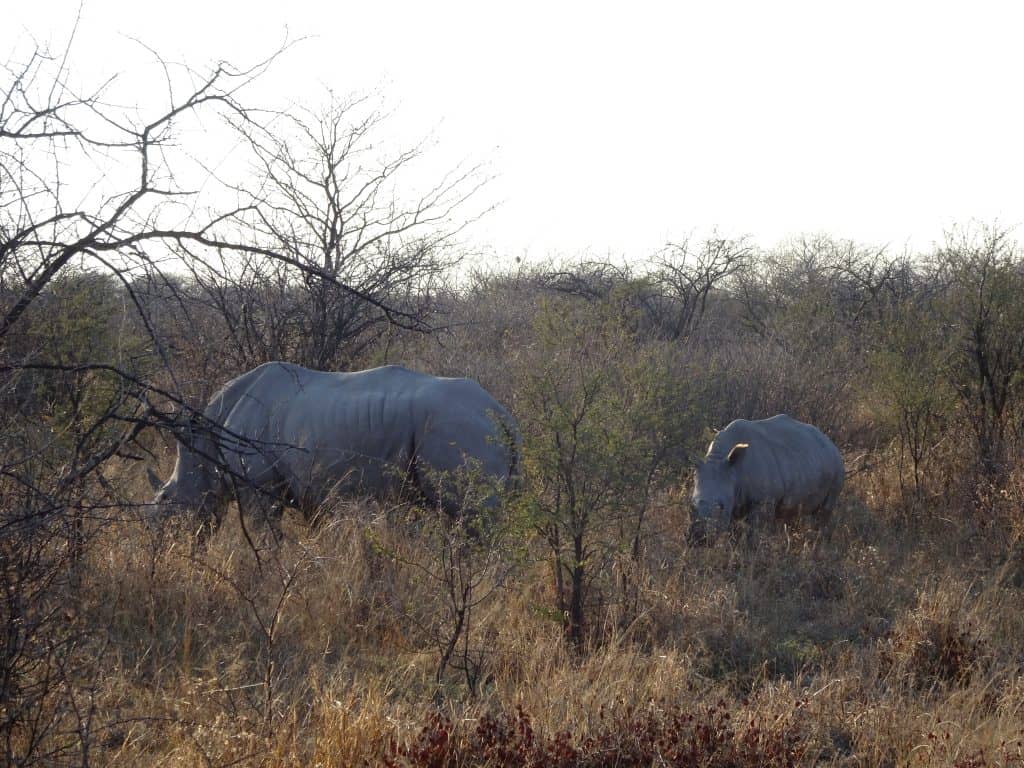 We pass our time catching up on sleep and playing cards in the restaurant. During the latter activity we are surprised by an unexpected visitor.

Suddenly a black rhino comes wandering into the camp, and stops at the small pool just outside the restaurant for a drink. Naturally we all crowd around the window, so the waitress opens the door for us. We’re all a bit hesitant about moving outside. Our guide told us that black rhinos are more aggressive than white ones, and after last night’s experience we’re really not keen on being charged by a rhino again. But the waitress assures us that this particular one is almost tame. He comes by every day for a little drink – even in summer, while there are people swimming in the pool!

We still stick close to the door while taking our pictures, so we can jump back to safety should it be necessary. We’re photographing and filming like crazy, until the rhino had enough to drink and wanders off back into the bush, without caring about us at all. What an absolute highlight! 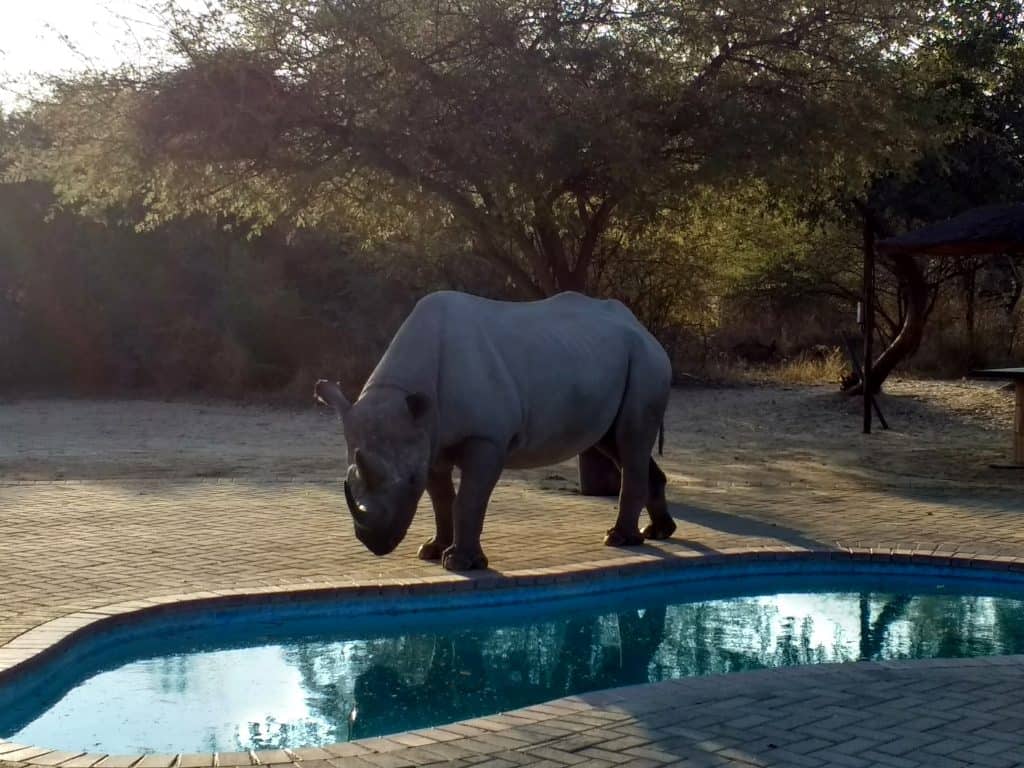 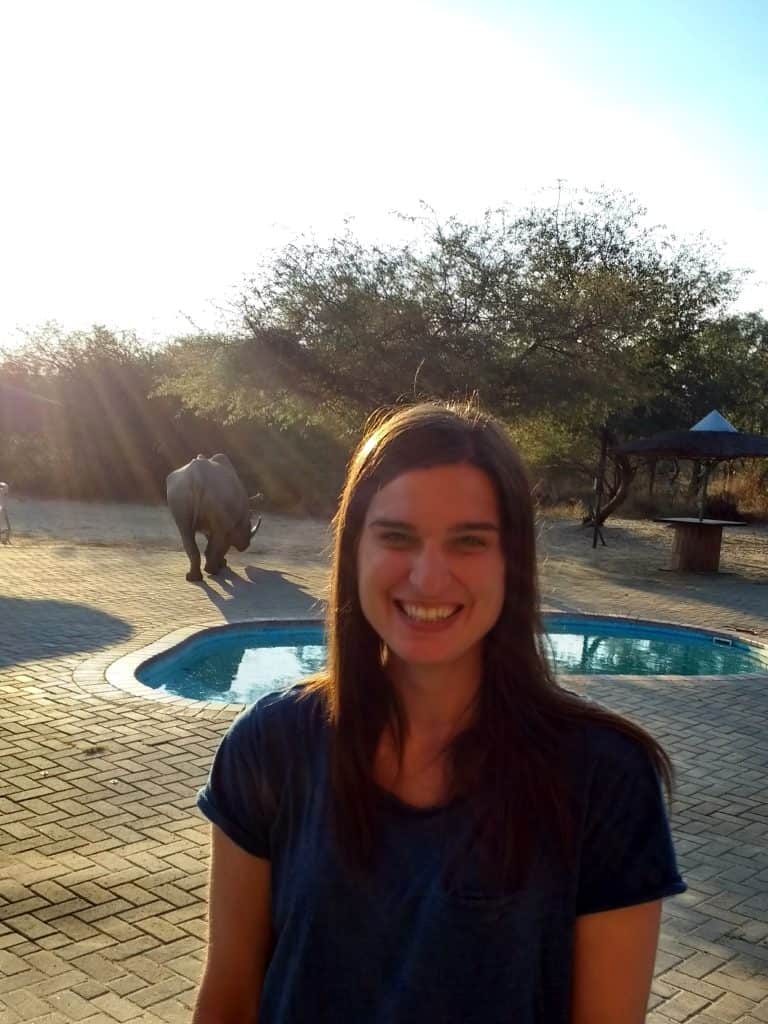 The best place to see rhinos in Botswana

Khama Rhino Sanctuary does an incredible job for the rhino and general wildlife conservation in Botswana. I’ll never forget the incredible time I spent there. True to its name it was two rhinos that provided us with the biggest adventures, the white one on the road and the black one at the pool. But I’ll also look back fondly at our hours-long card games, and even at wrapping up in three blankets at night because it was so cold. I’m happy to be freezing if I get to see this incredible wildlife in return! 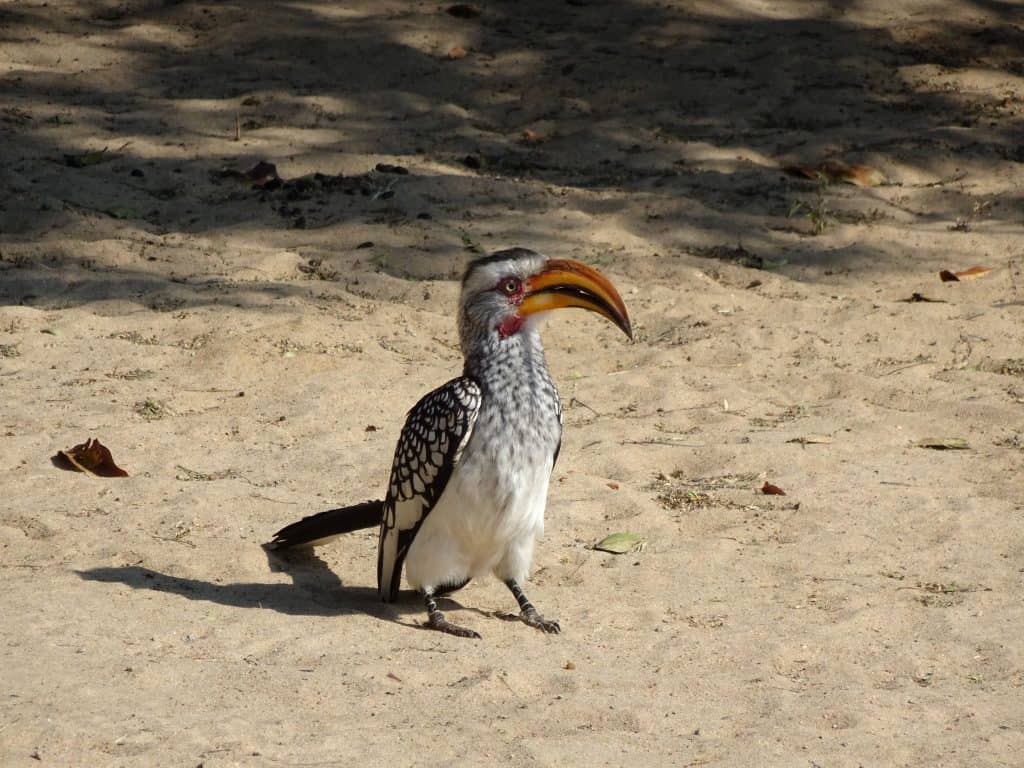 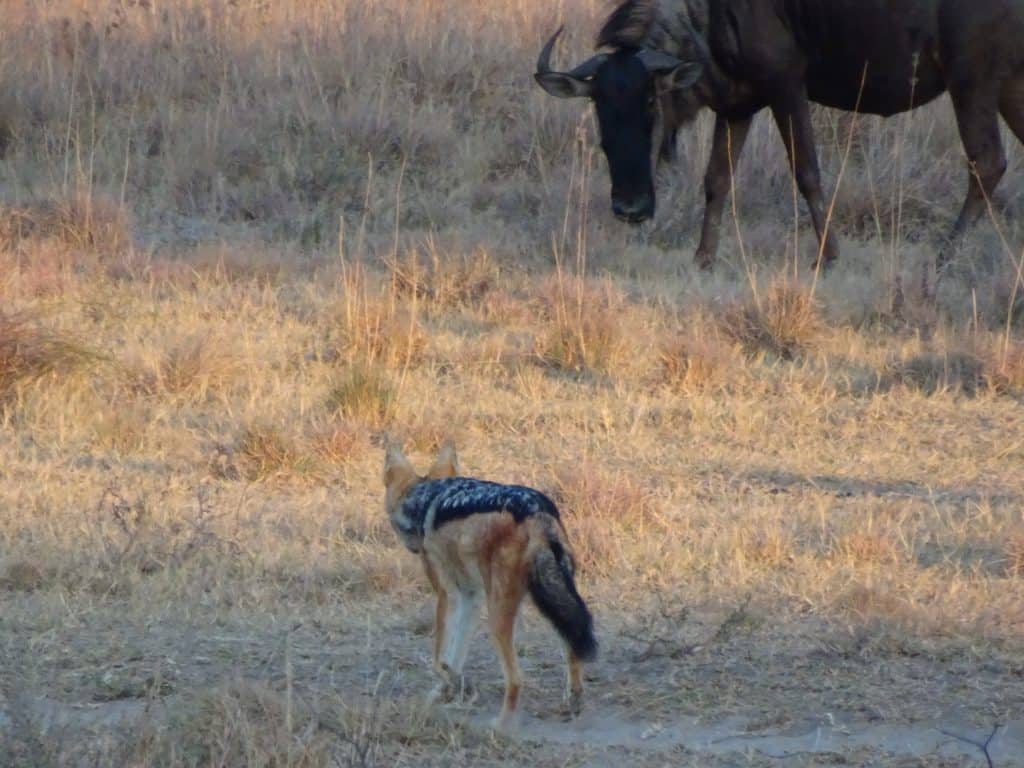 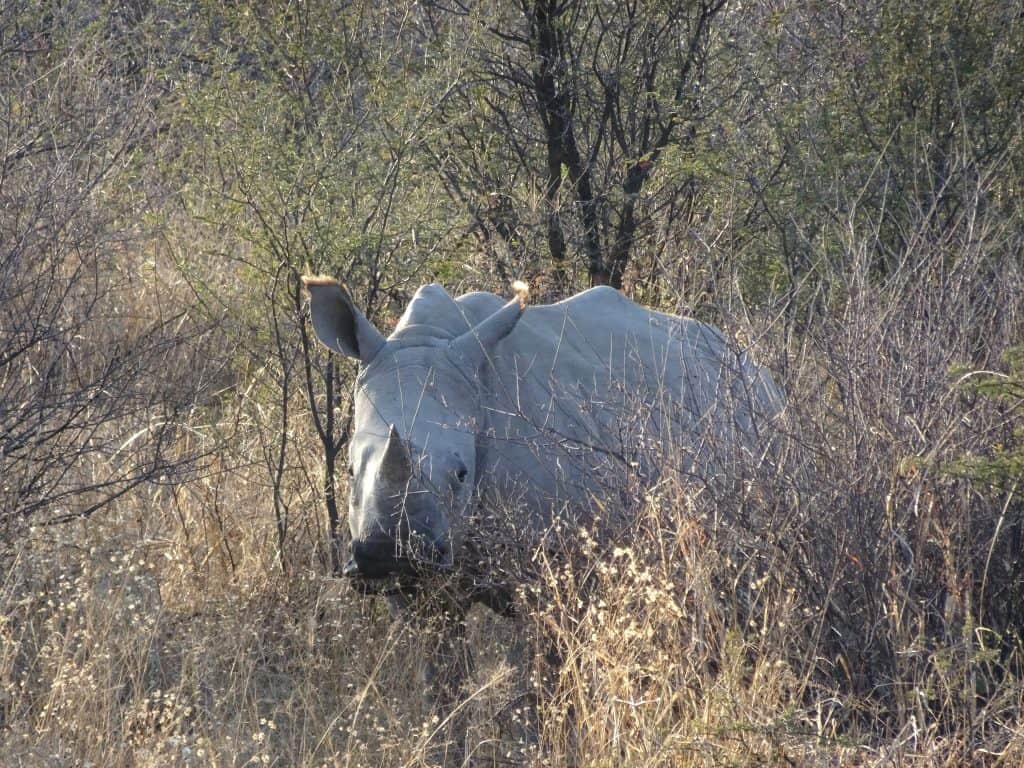 Have you been to the Rhino Sanctuary, or any similar parks? What were your most exciting wildlife encounters? Share in the comments! 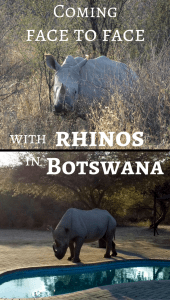