Warning: Parameter 2 to wp_hide_post_Public::query_posts_join() expected to be a reference, value given in /home/customer/www/globalintrovert.com/public_html/wp-includes/class-wp-hook.php on line 292
 Close encounters with an active volcano • Global Introvert Skip to content

Close encounters with an active volcano

While staying on Ischia I took a day trip to Mount Vesuvius and the old Roman city of Pompeii. The guide on the day trip was an Italian called Antonio. Fast-talking and completely unconcerned with the incorrectness of his German, he told his group everything about the volcano and the ancient city it destroyed. He talked about events from two millenia ago with a certainty as though he’d been there. In fact, he pointed out repeatedly that his version of events is the one and only truth – even when it derivates from the history books. While this had a certain entertainment value, that does not mean it wasn’t informative.

There was one thing he was specifically adamant about: the stupidity of living next to an active volcano. Once you heard the story of Pompeii’s destruction, you’ll know why. My version may not be able to compete with Antonio’s, because it’s missing the adorable accent and the constant detours when even Antonio himself lost track of what he was talking about. And unlike him, I’ll try to stick to the established facts. As long as you get an idea of why these two sites are most definitely worth a visit, I’ll have done my job. 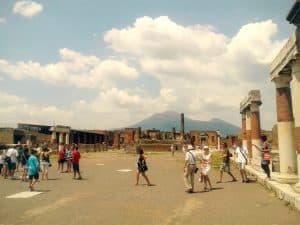 Mount Vesuvius was the first stop on our day trip. Vesuvius and Pompeii are so close together, it lends itself to do both in one day. We got there just as it opened, so we were among the first to walk up to the very top. Vesuvius has a rather cone-formed structure. Originally it was a much higher mountain, called Monte Somma. The huge eruption of 79 AD blew off the top, leaving Vesuvius as it is today. 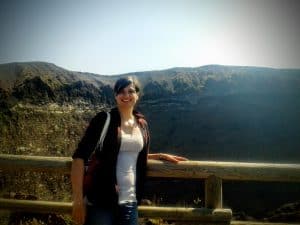 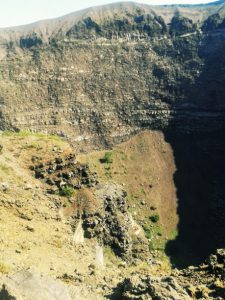 When you look into the crater you see smoke rising up in some places. It doesn’t look that worrisome, until you consider that Vesuvius is one of the most dangerous volcanoes in the world. Because there are so many people living next to it, any major eruption could have a devastating impact. Antonio had a point when he said people were blindly trusting their fate when living here. I guess we as humans always tend to believe bad things are simply not going to happen to us. With Vesuvius, I wouldn’t be so sure.

It’s the only volcano on the European mainland to have erupted in the past 100 years. The last time was in 1944 – making the next eruption somewhat overdue. According to scientists, the longer the period between two eruptions, the more devastating it will be. Some of Vesuvius’ past eruptions have been powerful enough to be felt all over Europe, with ashes raining down in such faraway places as Istanbul.

Antonio cared a lot about this topic. I’m not sure what he expected from us, but he seemed to think we should do something about it. Unfortunately I have no remedy against people moving into a volcano’s danger zone. Except remembering not to move into one myself. And of course I’m telling you about it here, so I guess I’ve done my duty. Consider yourselves warned.

If you need a break from thinking about worst-case scenarios, turn your attention away from the crater and towards the great view you get from Vesuvius. On the one side there’s Naples, with the sea beyond. On the other side there are villages, and somewhere among them is Pompeii, the next stop of our trip. 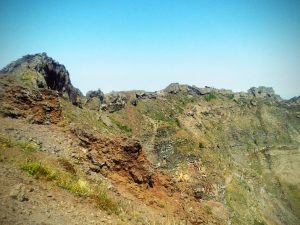 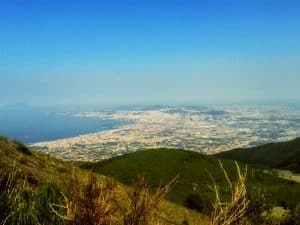 Pompeii was a well-doing Roman city of about 11,000 people, with all luxuries the time could offer. There were public baths, a complex water system, a gymnasium, and a port. Until one day in 79 AD everything ended. Several metres of volcanic ashes buried Pompeii deep underneath. It didn’t resurface until about 1500 years later.

According to the only surviving eye-witness account, the eruption lasted two days. It had announced itself by smaller tremors in the preceding days, which the people ignored. Such tremors were frequent in the region. Remember what I (or rather Antonio) said about not moving next to a volcano? The people of Pompeii they paid the worst price for their ignorance. When Vesuvius erupted, it rained hot white pumice onto Pompeii for hours. This heated the roofs of the buildings to a temperature of up to 140°C. And it wasn’t even the worst yet.

If you had not made your escape by now, you were doomed. On the second day currents of hot gas and rock with temperatures of up to 300°C devastated the city. There was nowhere to take shelter from the immense heat. The volcano blew up stones, ashes and fumes to a height of 33km. Pompeii was buried under the ashes and forgotten. 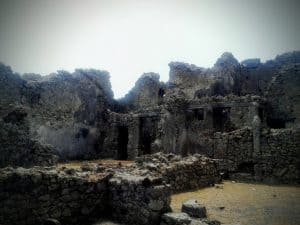 Only in the 18th and 19th century people seriously started to excavate Pompeii. The city turned out to be a jackpot for archaeologists, because the lack of air and moisture under the ashes preserved Pompeii’s artefacts for all those centuries. It’s the only ancient town of which we know its exact topographic structure, as nothing changed during all that time it lay buried. When you walk its ancient streets, it gives you a unique look into Roman life. 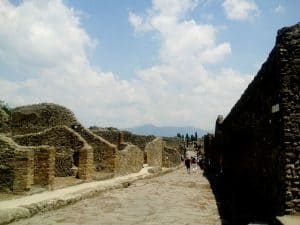 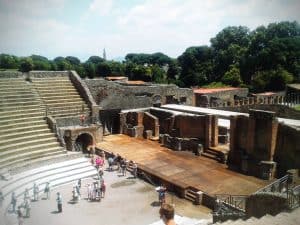 The whole area is so big, that you can’t possibly visit all of it in one day. For example, we only got to see the two smaller theatres for 2,000 and 5,000 people respectively. The amphitheatre that could hold 20,000 (which is almost double the number of residents in the city) was on the other end of the site. Even though only about a third of the buildings are open to the public, you could still spend several days if you wanted to look at all of them – and that’s keeping in mind that only two-thirds of the city have been excavated to this day.

What we did see was gladiator homes, a brothel, the market place and bath houses. The ancient streets have pedestrian crossings in the form of big stones laid into the ground, because the street itself would serve also as a sewer. Romans understandably didn’t want to walk in that. 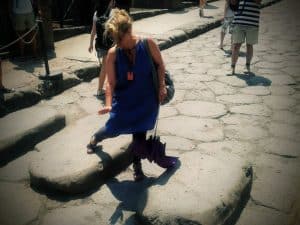 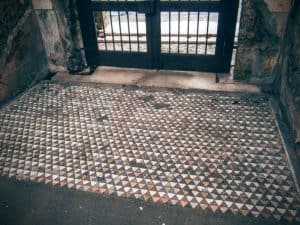 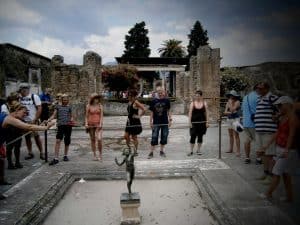 As exciting as Pompeii is, eventually al the ruins start to look the same in the summer heat. We ended our visit with taking a look at the clay figures of corpses. During the early excavation of Pompeii they filled plaster into the voids in the ashes where human bodies used to be. Thus they preserved the position the people were in when they died. It’s a bit gruesome, but fascinating in a morbid kind of way. The figures include that of a dog and a pregnant woman. 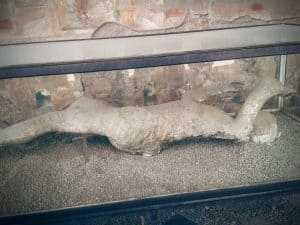 On the way back to the harbour Antonio takes his last opportunity to finish his history lesson. Unfortunately he swerves off topic so often that he never comes to an end. Besides, despite his best endeavours the majority of the bus is asleep by now. When Antonio said goodbye to us at the ferry, he was utterly disappointed he had to end his history lesson for the day. We, on the other hand, were happy to return to the peace and quiet of Ischia – and bring some water between us and that volcano.

Have you ever been to a volcano? Maybe to Vesuvius itself? Did it creep you out? Share in the comments!