Warning: Parameter 2 to wp_hide_post_Public::query_posts_join() expected to be a reference, value given in /home/globali6/public_html/wp-includes/class-wp-hook.php on line 287
 Barcelona Food Scene • Global Introvert Skip to content

One thing that totally blew me away in Barcelona was the food scene. I knew Spanish cuisine had a good reputation, but what I got dished out during my trip was outstanding.

On my first day, the walking tour guide, Angelique, gave us tips on how to recognise a good restaurant: Never eat anything on La Rambla, with the exception of the Marcet de la Bouqueria. Everything else is too expensive and only meant to nap tourists. Never go to a restaurant that has pictures of all their dishes on the menu, for the same reason. And finally, the best restaurants are those that do not have an English menu at all. I did adhere to the first two tips, if not always to the third, for the simple reason that I wouldn’t understand a Spanish menu and I like to know what I eat. I still managed to find some amazing restaurants in Barcelona that I want to share with you.

My first proper meal in Barcelona was lunch with some fellow travellers after our tour through the Gothic quarter. We finished at the harbour, and our awesome guide Angelique took all those interested along to a small Catalan restaurant. Their signature dish was Fideuá, a variation of seafood paella made with pasta instead of rice. As I’m not much of a seafood person myself, I opted for chicken paella instead. Is there a more famous Spanish dish to start off a week of outstanding food?

In the afternoon of the same day, I explored the Marcet de Sant Josep de la Bouqueria on La Rambla. You walk past row after row of veggies, fresh fruits, chocolates and sweets, seafood and meat. I stopped at an ice-cream stand selling popsicle with Sangria and Mojito flavour. Yummy! 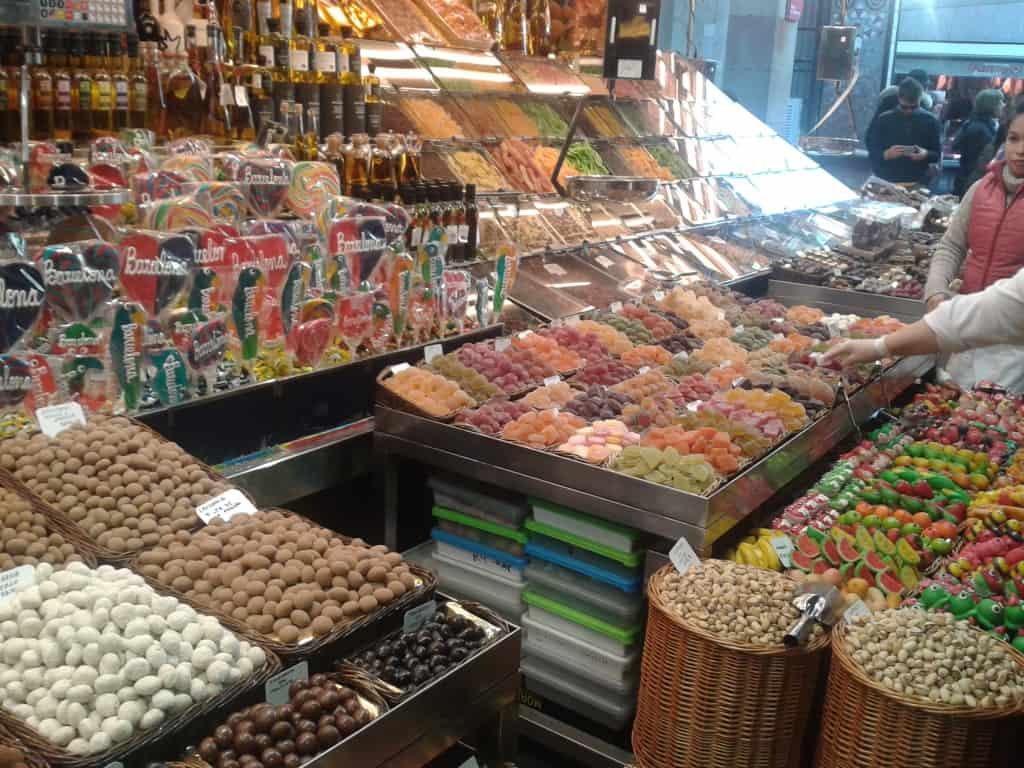 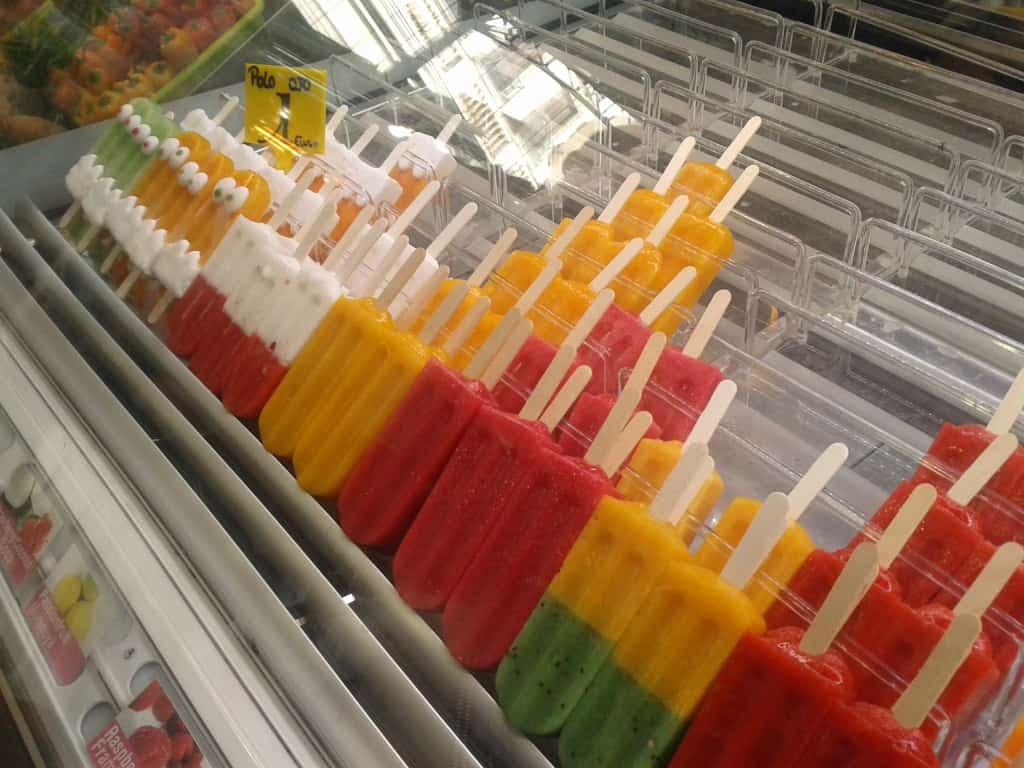 The day finished off with dinner at an all-you-can-eat tapas bar. Tapas are not an originally Catalan dish but have been adopted from the rest of Spain. As Angelique explained to us, the Catalan decided that if they’re going to do it, they’ll do it best. I’m not arguing with that one. 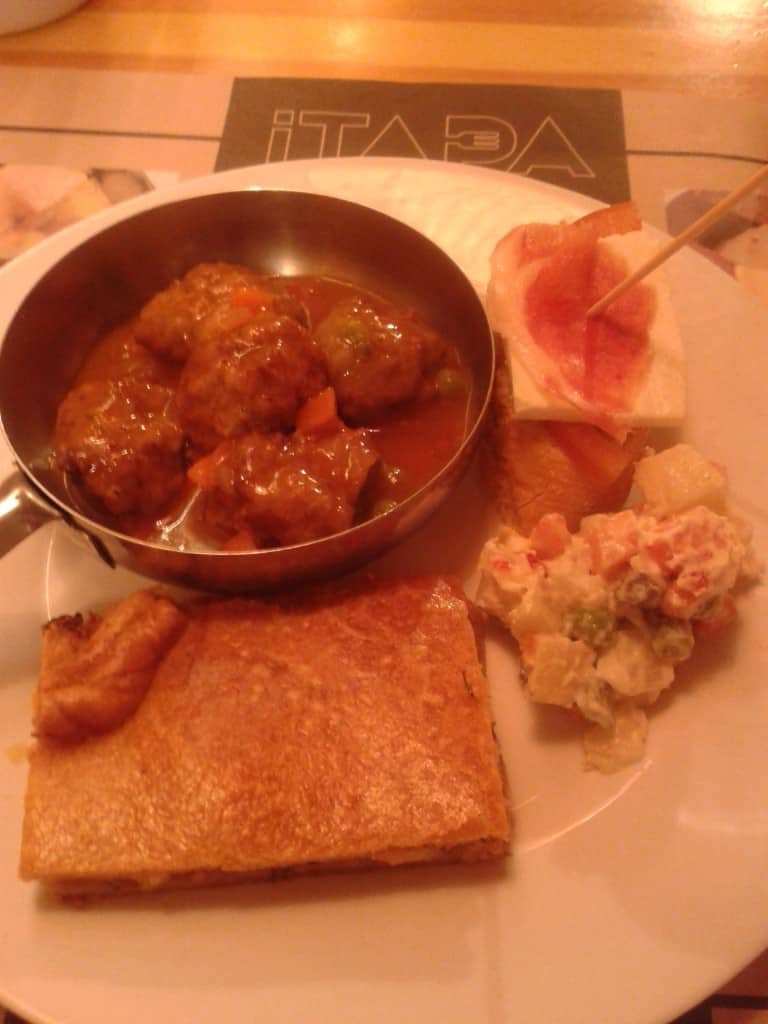 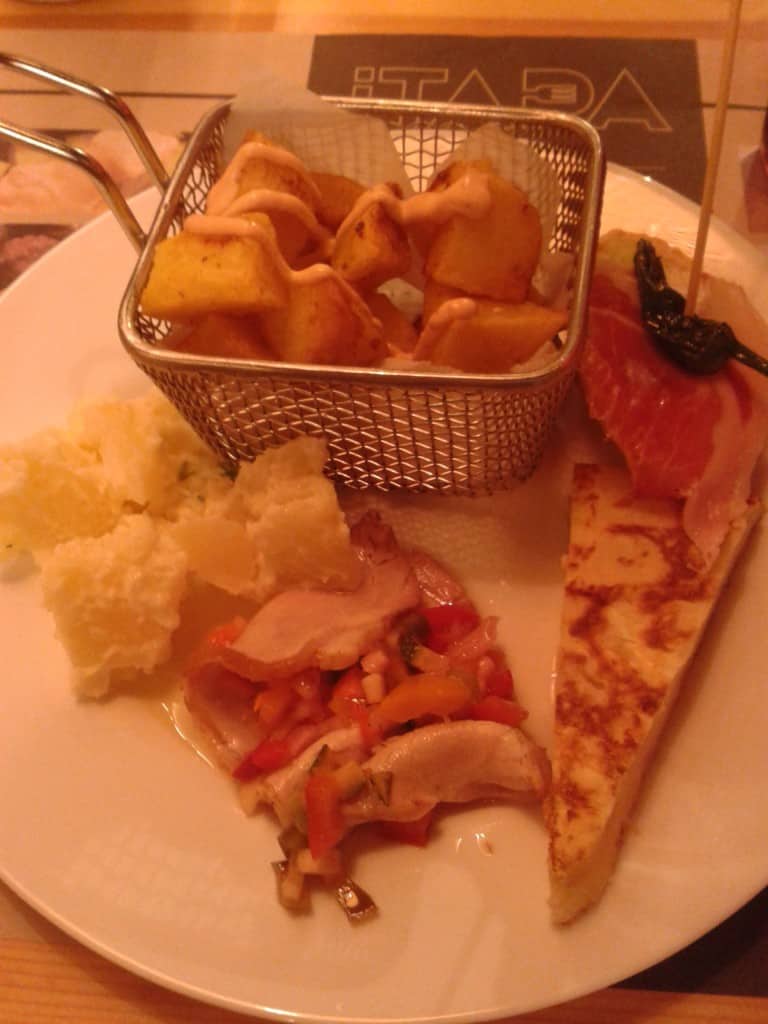 A lot of my favourite restaurants I found in the El Born quarter, which is between the old Gothic quarter and Barceloneta, the beach area. Every restaurant I’ve been to in El Born was outstanding. The first one I need to tell you about is Orígens. It offered “Menús d’Especialitas” consisting of a salad, a main course and a dessert. Add a drink, and you pay about 20 bucks. For that quality of food, that’s great value for money. I couldn’t stop obsessing about how good the food was afterwards. So delicious! 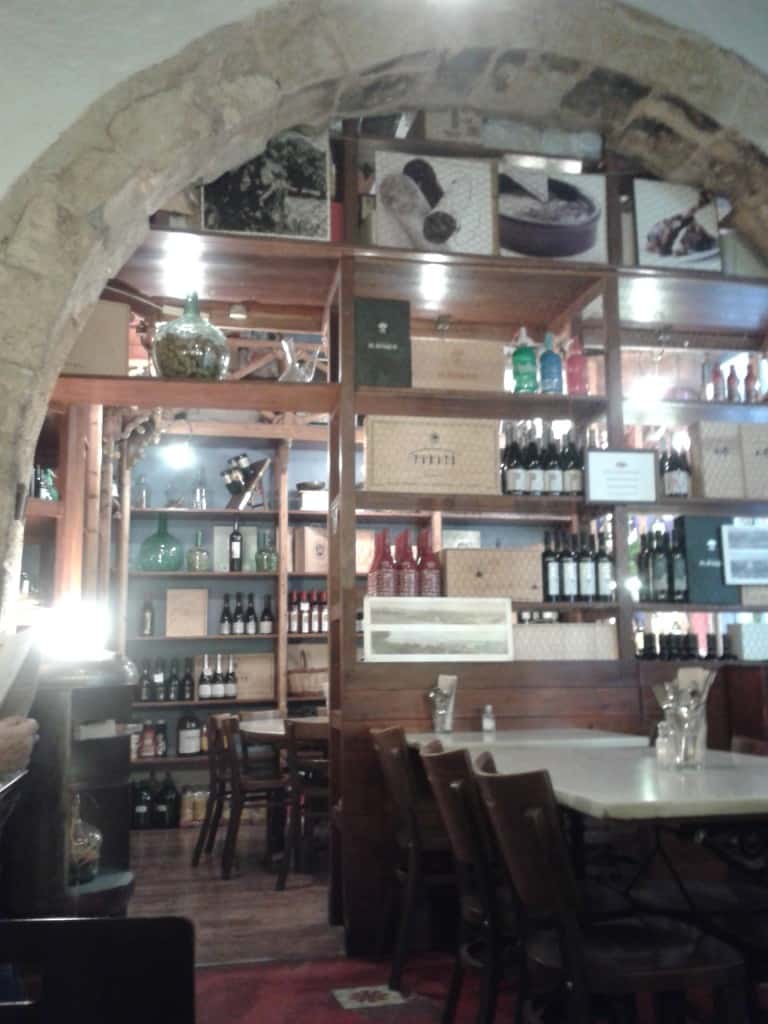 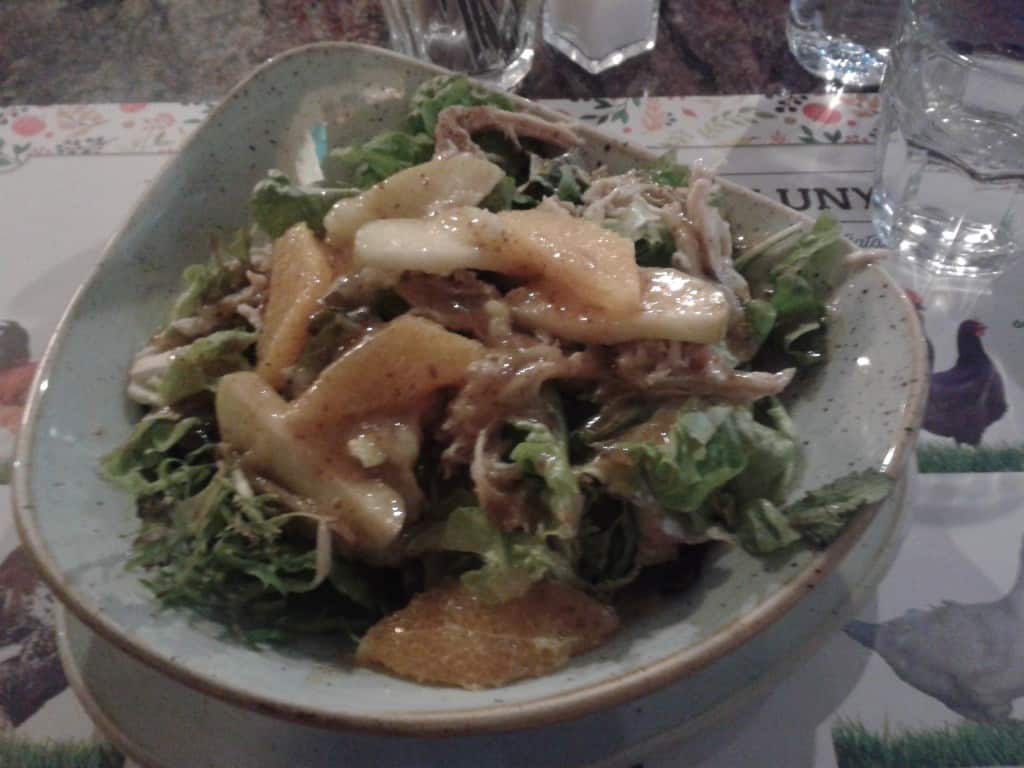 The main dish I chose was a Catalan speciality called coca. It’s a kind of pastry that can come with a lot of different fillings or toppings. Apparently, there are a lot of different variations. Mine was with duck, figs and caramelised onions. Anyone hungry yet? 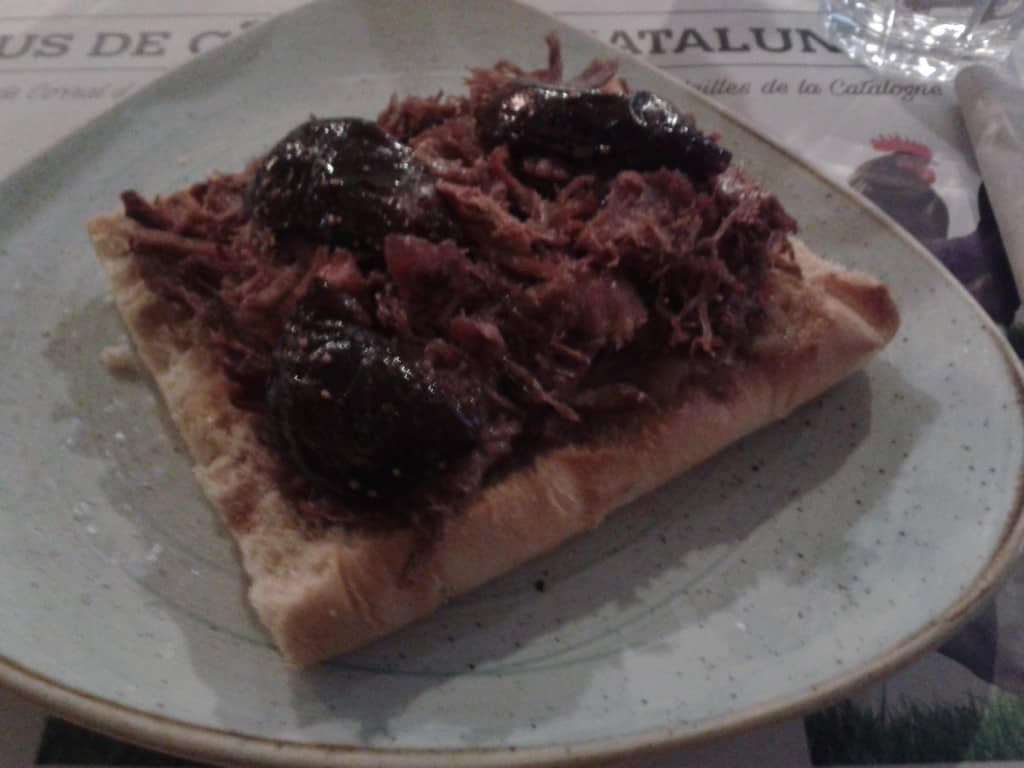 To Pirineu En Boca, also in El Born, I went for dinner rather than lunch. Again I got a salad and a main course as a menu. I had the duck with potatoes and pear cooked in red wine, served on a hot plate so it wouldn’t get cold while you eat it. As it was evening, I treated myself to a glass of rosé with the food. I’m a bit embarrassed to say that by the time I was done eating and considered asking for the check, I felt slightly drunk. It was only one glass of wine! However, I did what every sensible person in this situation would do: I decided to stay seated for a little longer and ask for dessert. One apple pie later the dizziness was gone and I was ready to walk out of the restaurant in a straight line. 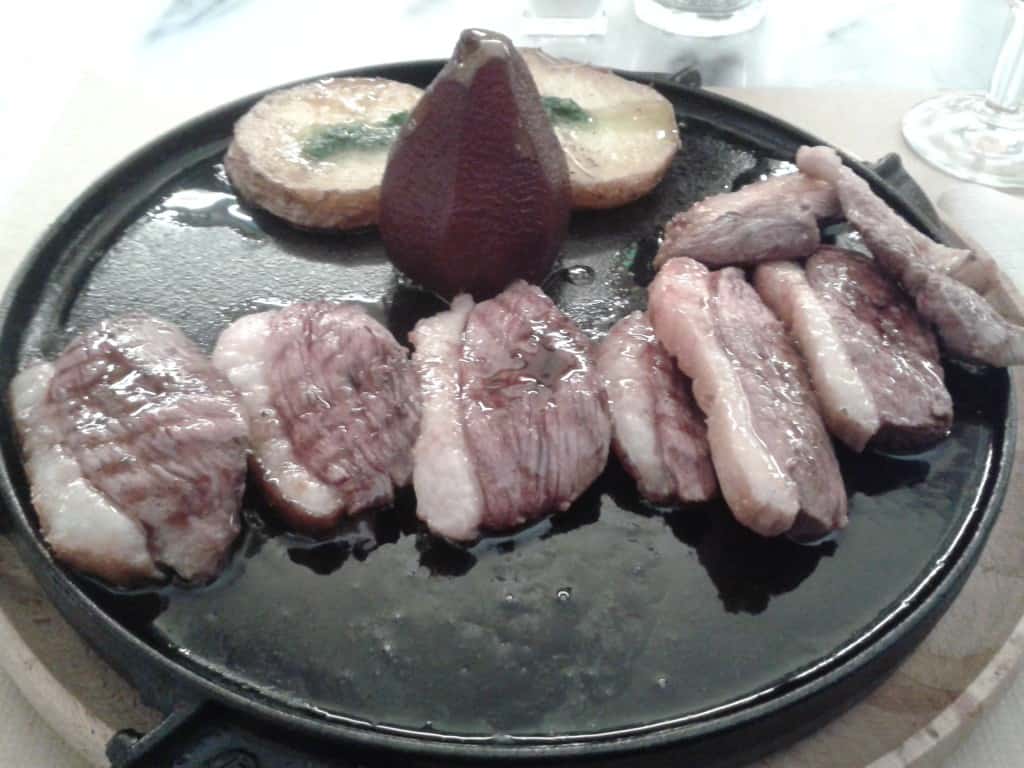 Spanish burgers (because, why not?)

While talking about restaurants in El Born there is one more place I need to mention: Bacoa El Kiosko Burger Bar. Although burgers are not exactly typically Spanish, these ones were homemade with local products and totally delicious. Besides your standard beef and cheeseburgers, you get some more extraordinary choices like for instance the “Australia burger” or the “Japan burger”. I went for the “Asturiana” with blue cheese and caramelised onions, and “bravas” on the side: hand-cut fried potatoes with two kinds of sauce. Honestly, it was one of the most delicious burgers I’ve ever had!

Later I found out that the restaurant belongs to a chain, and there was another one just one street away from my hotel in the Gothic quarter. So if you’re in Barcelona and you feel like having a great burger, seek out one of these burger bars. They’re amazing! 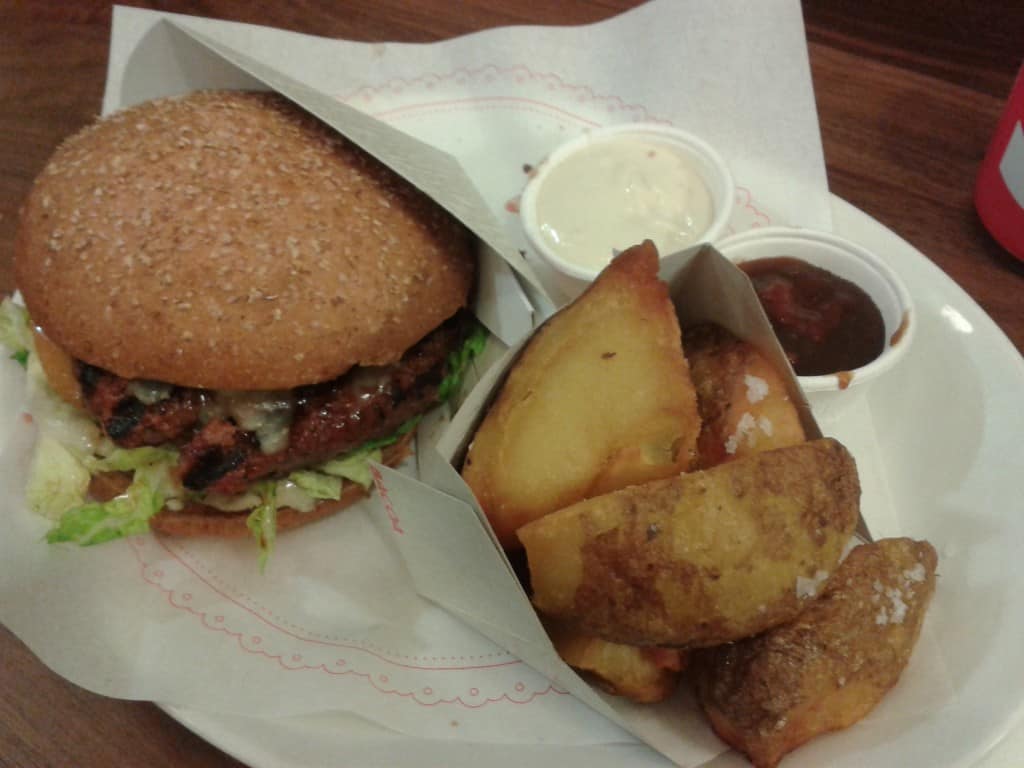 For in-between: Jambon and cheese

One thing you see a lot in Barcelona are little bistros specialising in Spanish jambon and cheese. You recognise them easily by the whole legs of ham hanging in the window and over the bar.

After my second walking tour with Angelique, she took us to one of those right around the corner from Sagrada Familia, called El Petit Porquet. You got to choose between a jambon sandwich, or a plate with a variety of hams and chorizo, with an accompaniment of bread to share between two people. With both you got croquetas, the Spanish croquettes I saw a lot in Barcelona, and gazpacho, a cold tomato soup. The sandwich menu was 8 Euro and a drink is included. You really get your value for money in Spain. 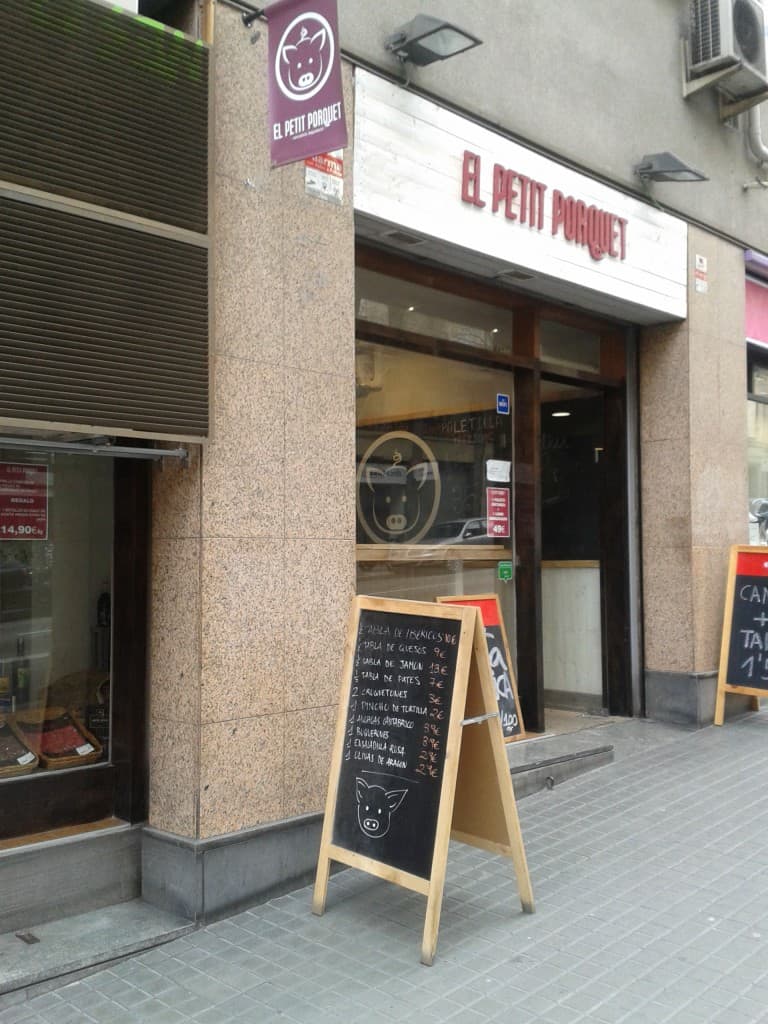 Lastly, I should mention breakfast. Most days I simply got a quick coffee and a pastry from the first cafe I encountered. But one morning I made my way to the cafe Granja La Pallaresa in Carrer Petrioxl, the “chocolate lane”, a small street in the Gothic quarter that was recommended by both my guidebook and Angelique for its good cafes.

I had churros with hot chocolate to dip them in. I was told Catalan traditionally eat those in the morning, rather than in the afternoon. They have a point there. What better way to start the day? 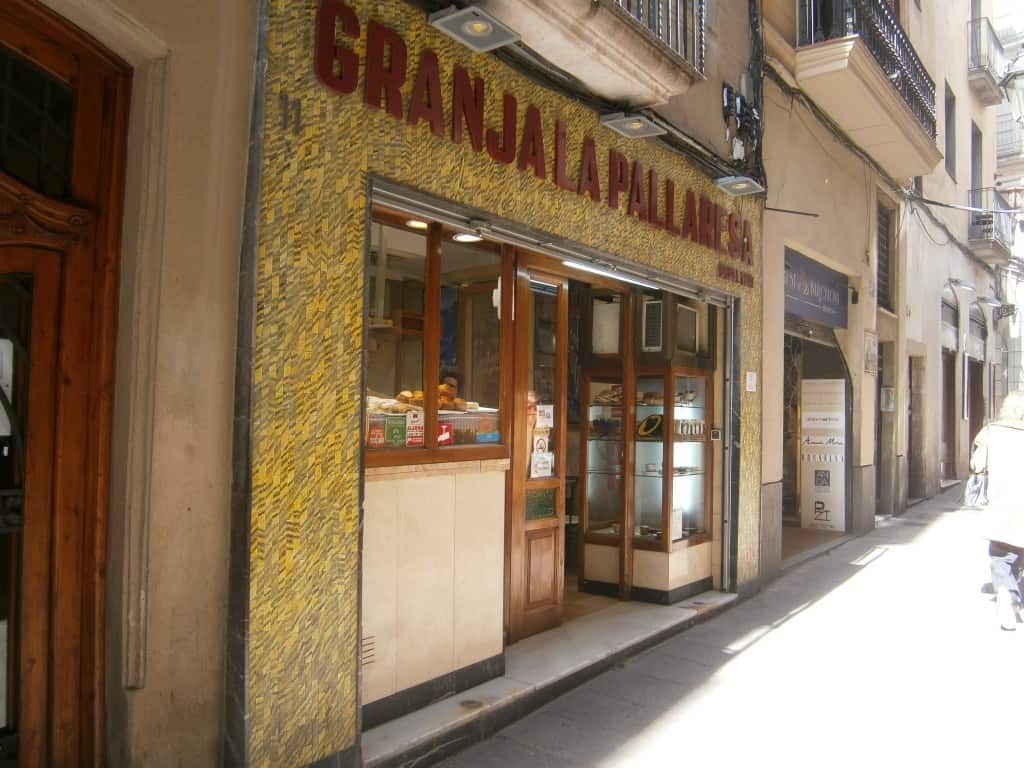 To come full circle, my last meal of the trip was chicken paella again. Totally delicious! That week in Barcelona turned me into a fan of Spanish and Catalan cuisine. The only side-effect was that I also became one of those people that constantly take pictures of their food. But I couldn’t help it, I wanted to be able to share it with all of you.

I hope I succeeded in giving you some tips for your next stay in Barcelona. Until then, if all this talk of food has made you hungry, maybe it’s time to find your nearest Spanish restaurant, now that you know what dish to ask for. 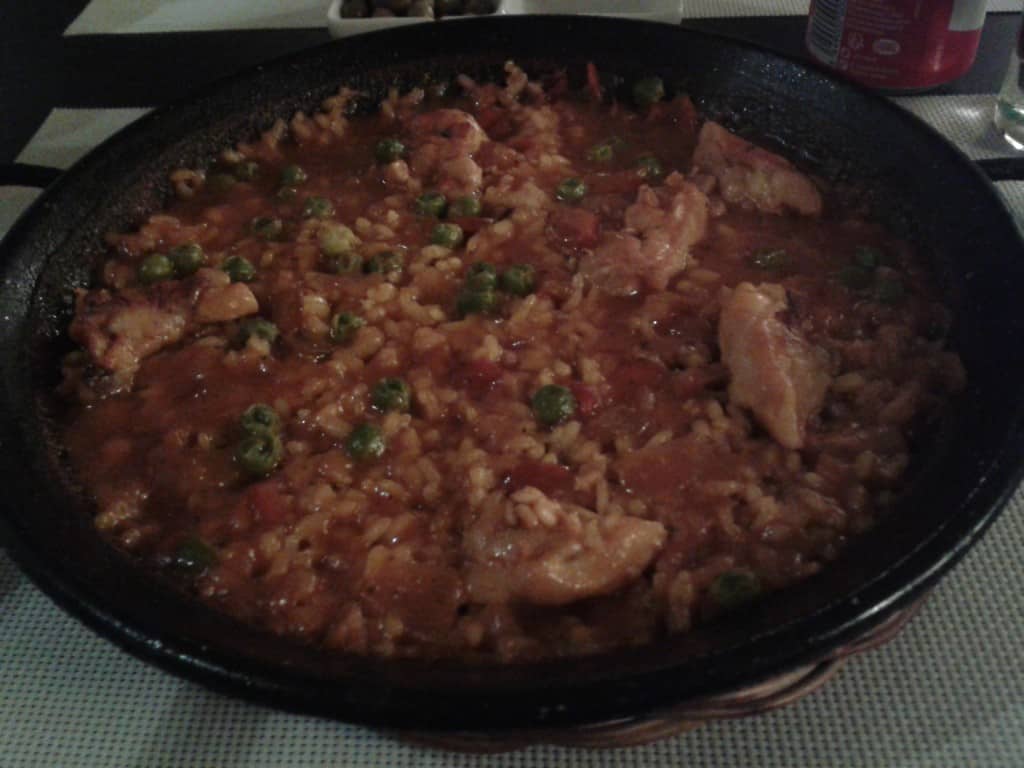 What’s your opinion on Spanish food? Any favourite dishes? Or tips on the Barcelona food scene and specific restaurants I need to try on my next visit? Share in the comments! 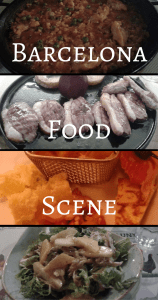