Warning: Parameter 2 to wp_hide_post_Public::query_posts_join() expected to be a reference, value given in /home/customer/www/globalintrovert.com/public_html/wp-includes/class-wp-hook.php on line 292
 7 reasons to love the Gold Coast • Global Introvert Skip to content

7 reasons to love the Gold Coast

The Gold Coast is on Australia’s East Coast, just south of Brisbane. As I have relatives in Queensland I had the chance to visit this beautiful piece of earth plenty of times during the months I spent in Australia. From the never-ending beaches to the man-made attractions along the coast, the Gold Coast has plenty to offer. If you are contemplating a visit, here are some reasons to persuade you.

As the name suggests, the Gold Coast offers plenty of golden beaches. I’ve been at Miami beach a lot (yes, there’s a Miami at the Gold Coast), because my sister lived there for a time and I was staying with her. But it really doesn’t matter which beach you pick, you simply can’t go wrong. It might get a bit more crowded the closer you get to Surfers Paradise. In Miami I sometimes had the beach almost to myself. Also, I was there during the Australian winter. I guess in summer there might be more people. But as the weather is pretty amazing all year round, there’s no excuse not to spend your days relaxing on the beach no matter what time you visit. 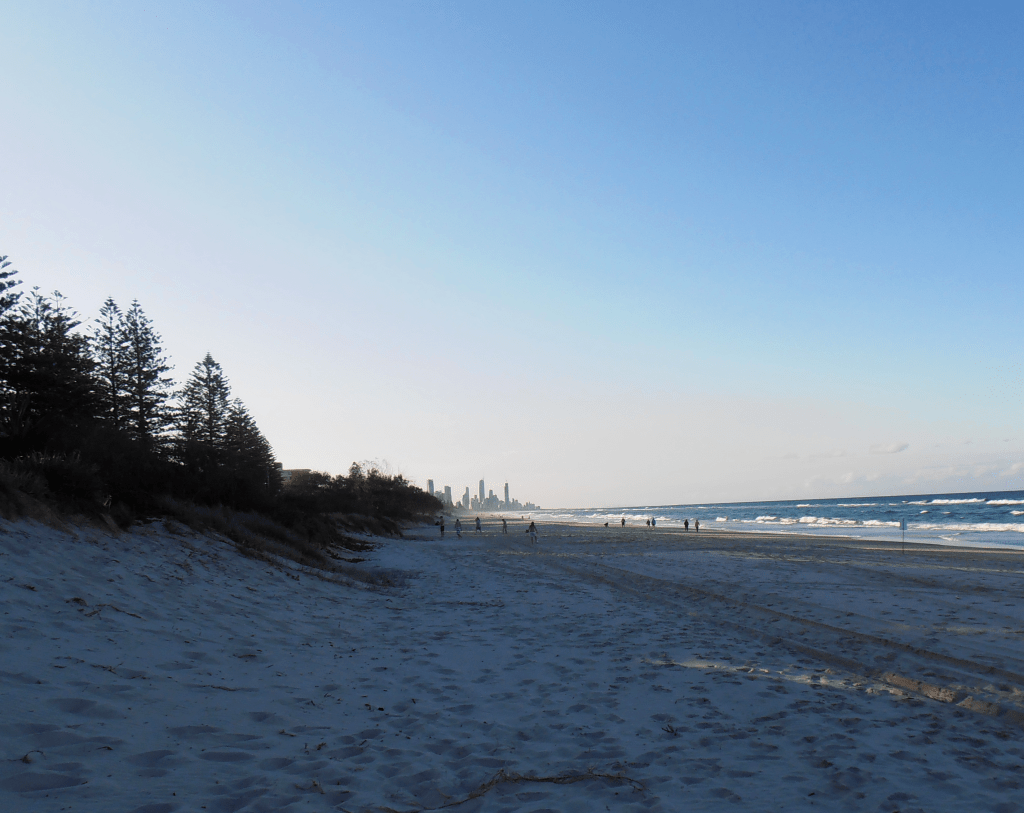 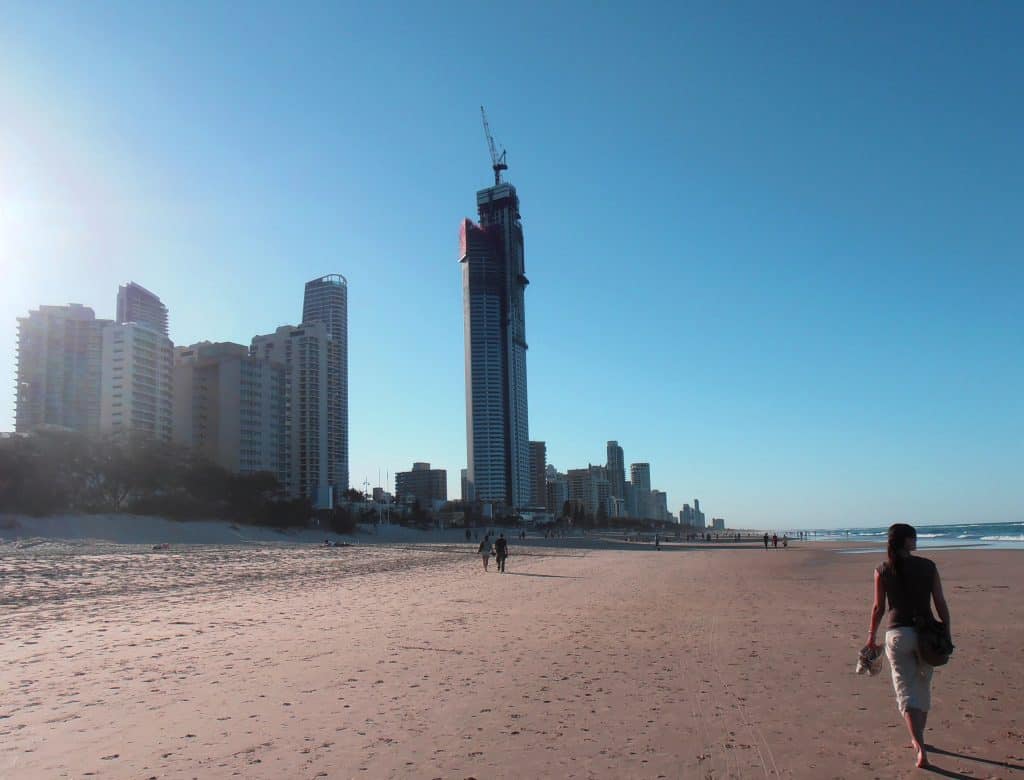 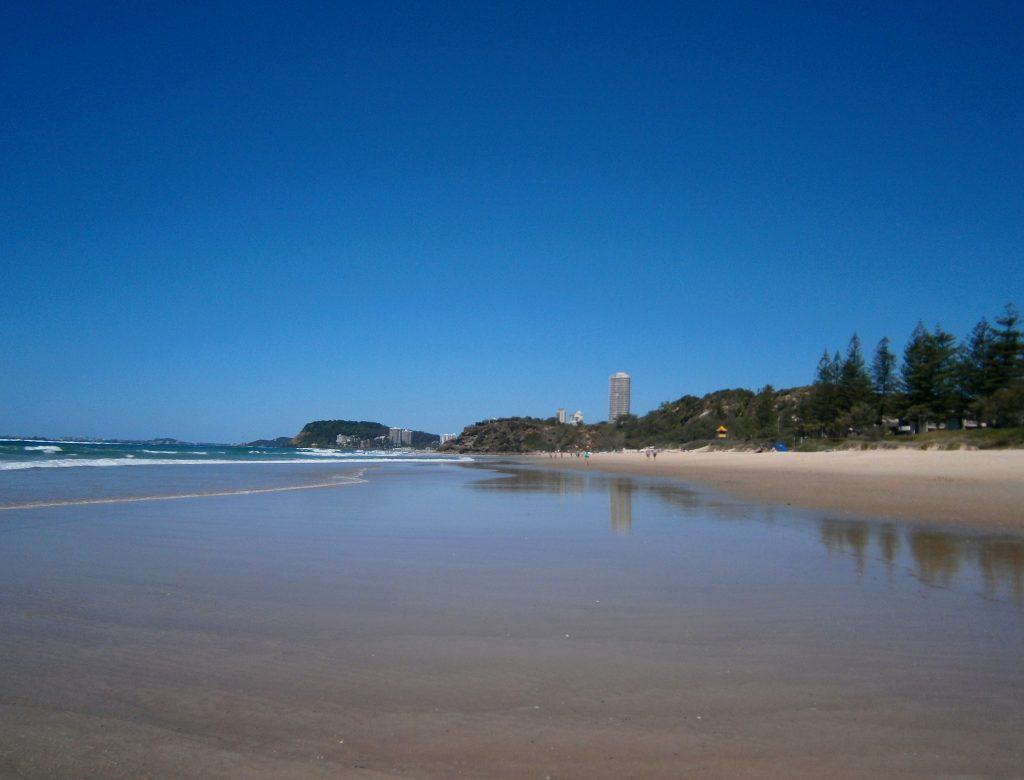 You could say Surfers is the capital of the Gold Coast. This is were all the tourists go to. It’s where you find a lot of restaurants, shopping, and night-life. I remember my aunt was always hesitant to go there because it has a bit of a reputation for crime. But really it’s no worse than any other place. As a main tourist hub and the night-life centre of the Gold Coast, there is naturally some crime going on. But I never felt unsafe there, so don’t worry too much about it.

When you’ve done all your shopping and dining, you can stroll down the main street and look out for one of Surfers’ curiosities: the Meter Maids. Girls in golden bikinis whose original purpose is to top up people’s parking meters so visitors don’t have to worry about their cars while shopping. Today they probably spend more time taking pictures with tourists. 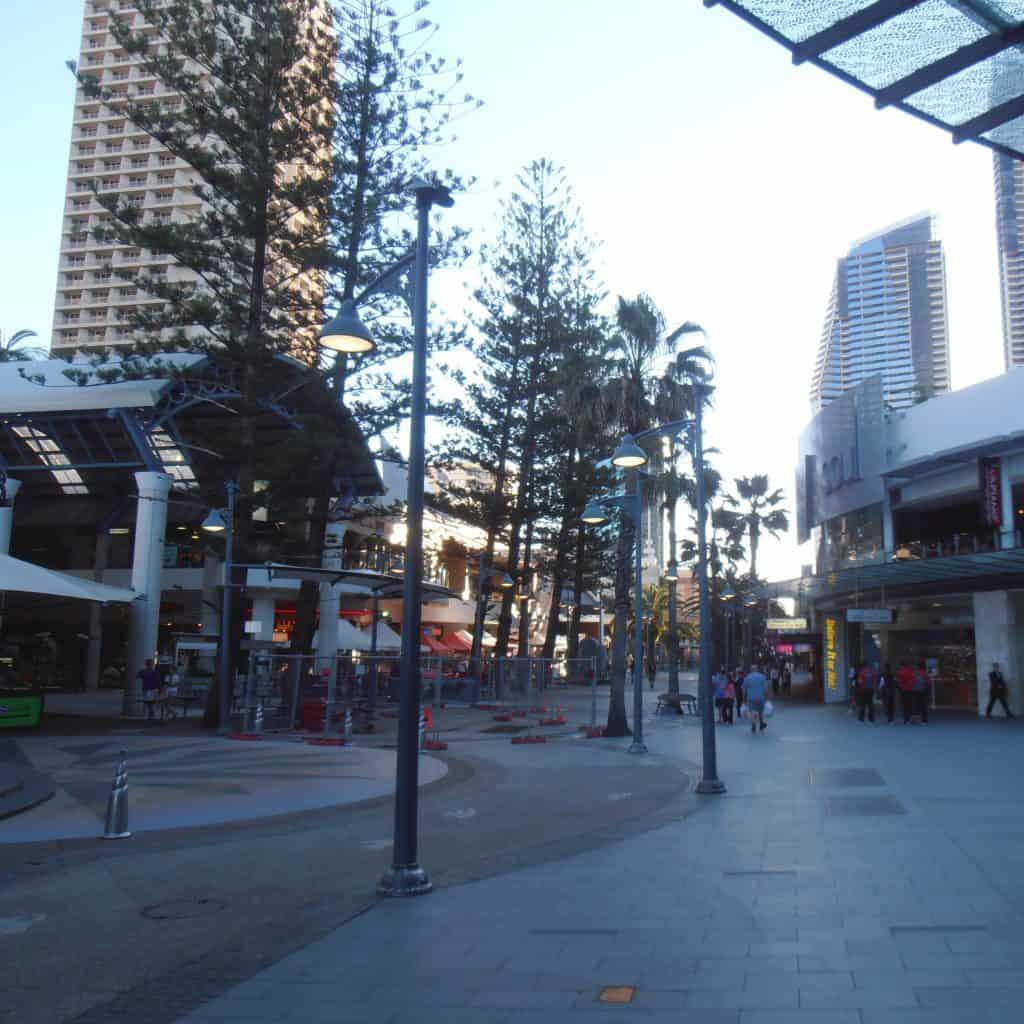 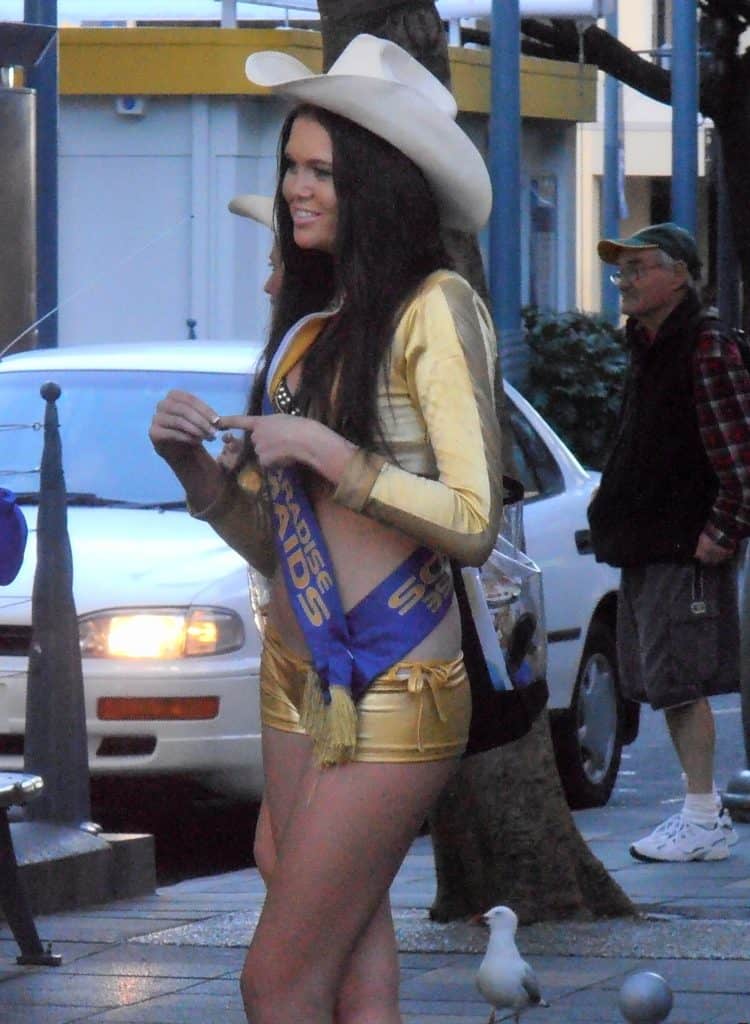 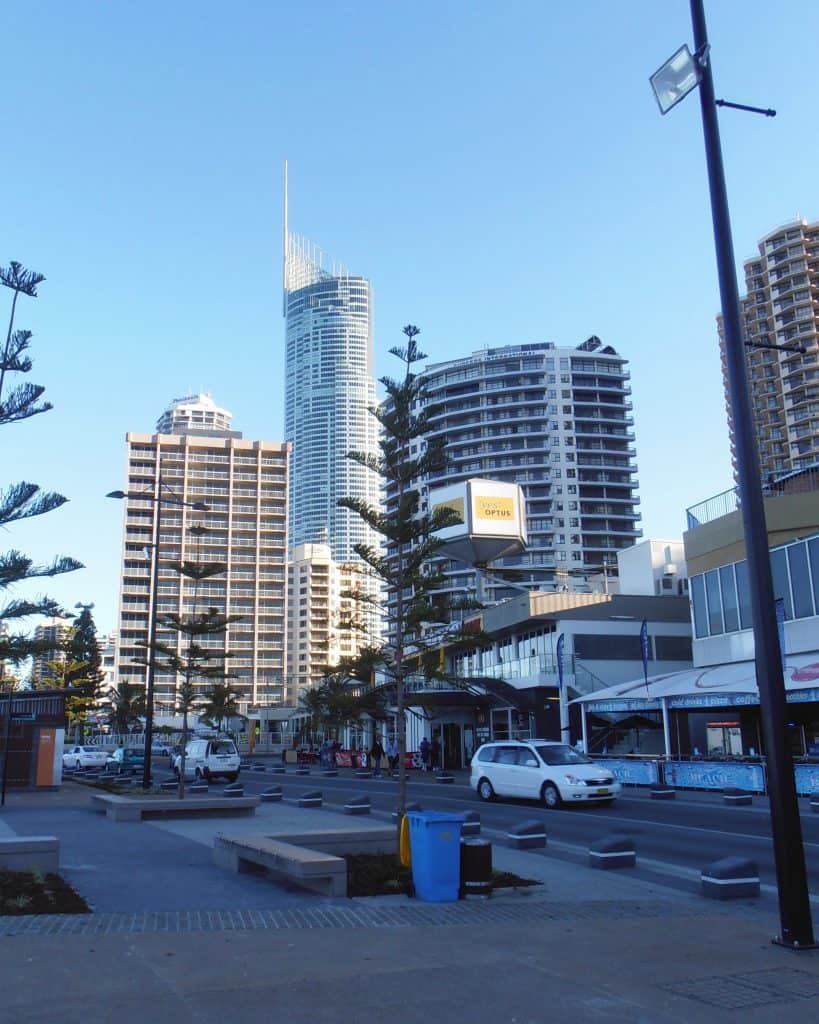 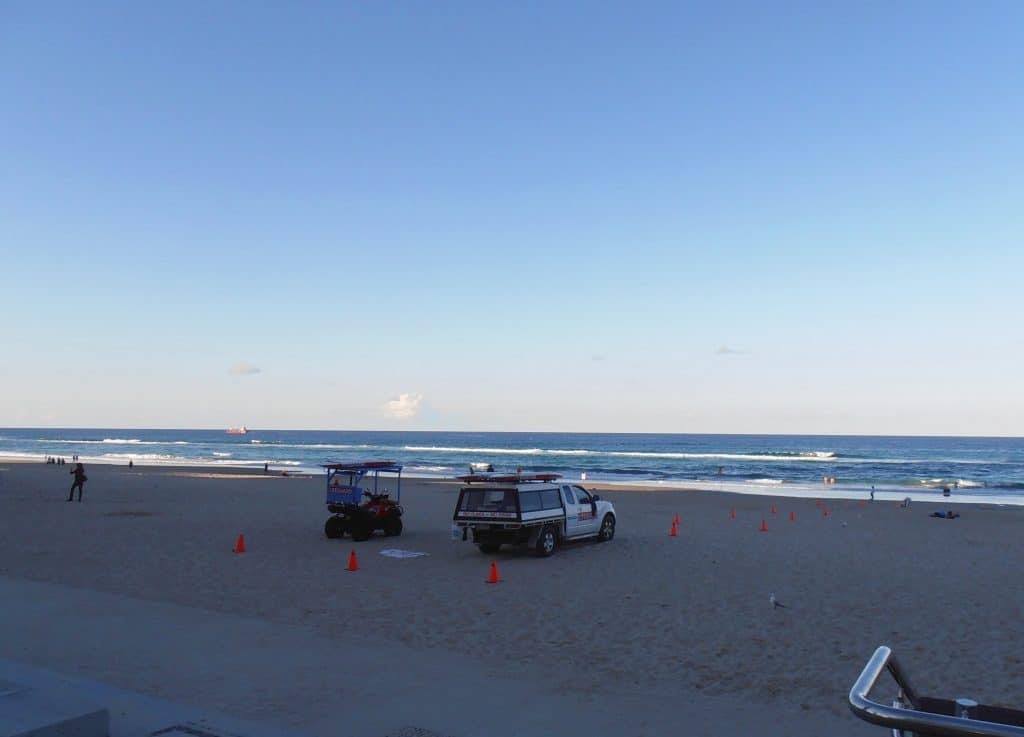 Situated directly in Surfers Paradise, the Q1-Tower is one of the tallest buildings on the Gold Coast. There’s a viewing platform on the top floor, called Skypoint. Its 360° panorama is amazing. It also features a bar and cafe, if you want a drink to go with the view. Admission starts at 24 AU$, so it’s not that cheap. But the views are amazing.

There’s also the options to do a climb on the Q1 Building. I haven’t done this, but if you feel adventurous, prices for adults start at 74 AU$. 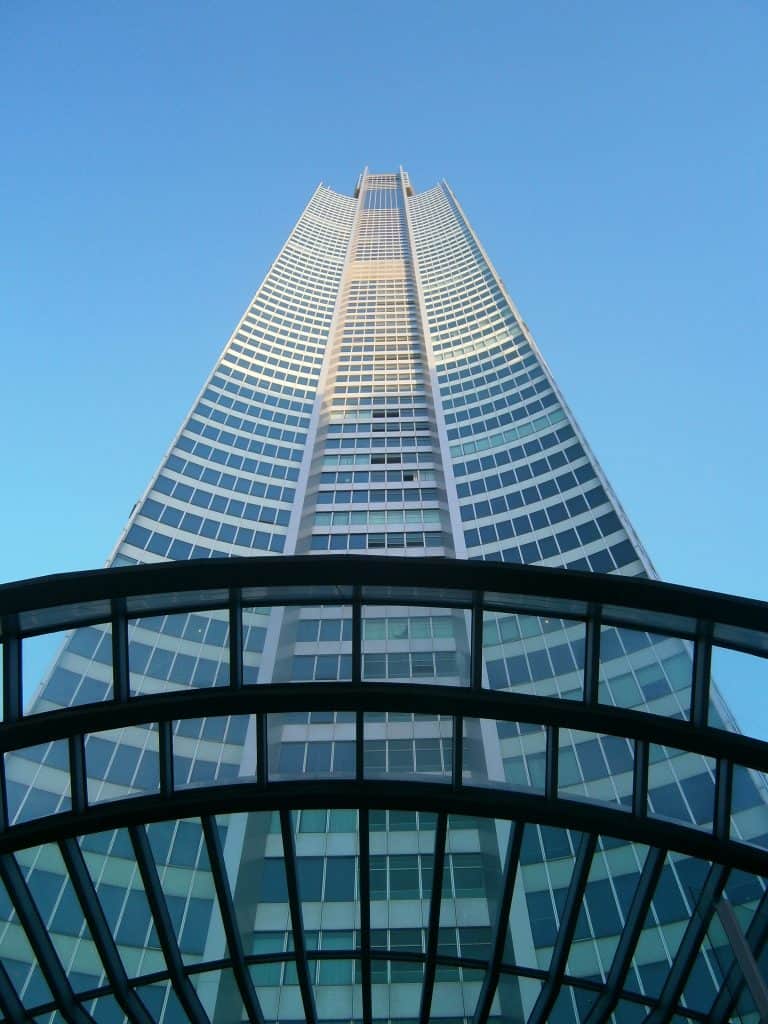 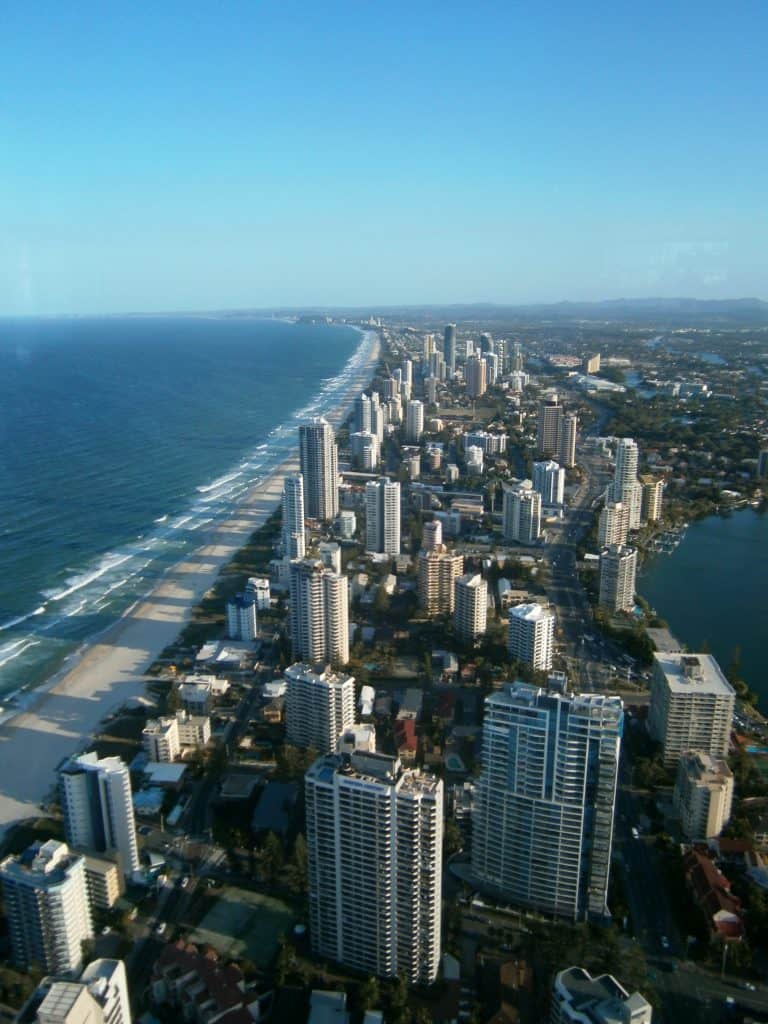 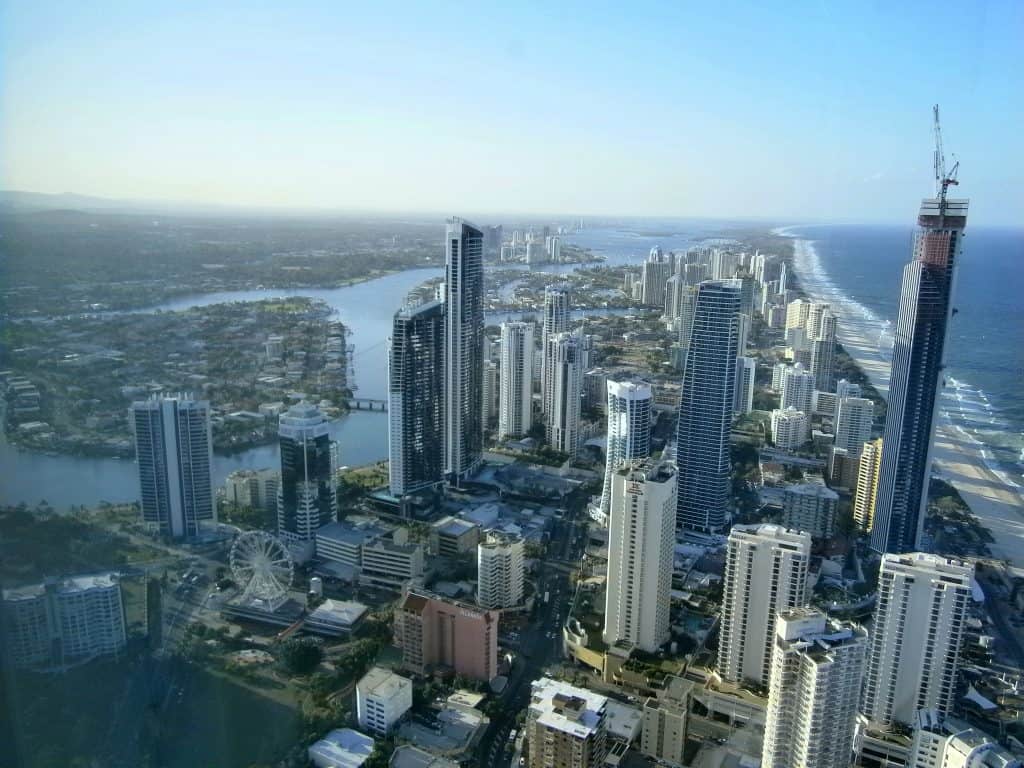 There are loads of different shopping centres along the Gold Coast to fulfill any of your consumerist desires. One I can recommend is Harbour Town, for outlet shopping. There’s outlets from pretty much any major brand, plus cinemas, restaurants and cafés for the break in between.

My favourite though is the Pacific Fair. It’s in Broadbeach, just south of Surfers Paradise. When you’re inside the built-up is resembling a Southern village, with colourful walls and little alleys between the shops. The streets have all names taken from European destinations like France or Germany. Pacific Fair has all the popular stores and brands. There’s also restaurants and a cinema. 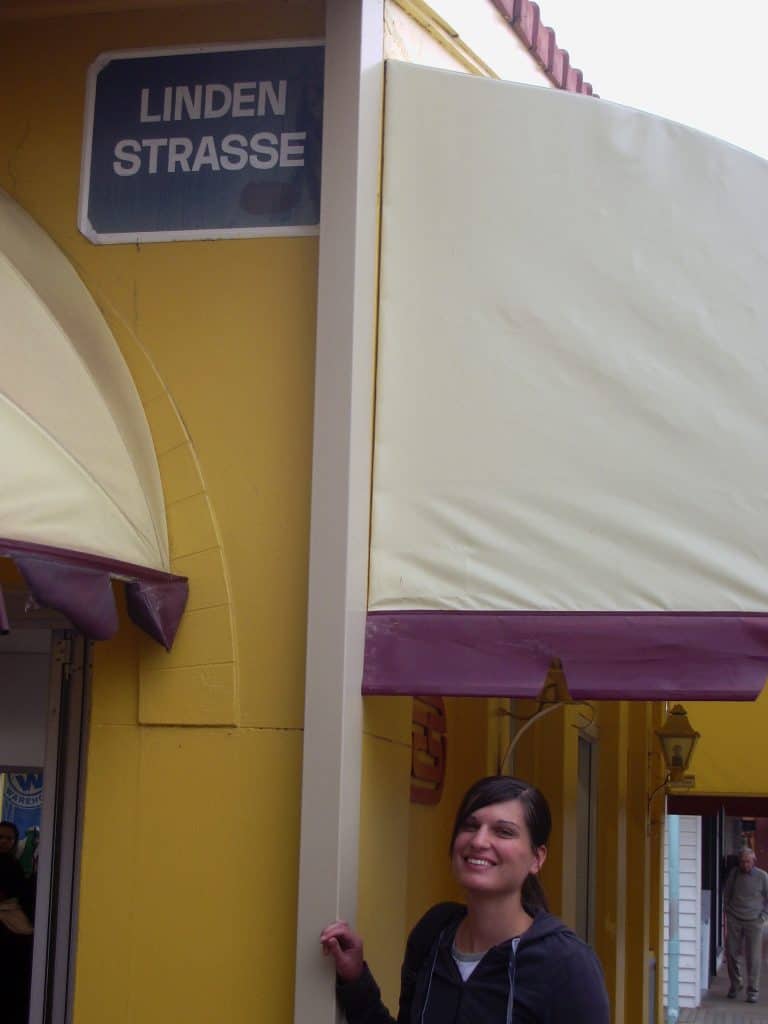 If you’re planning to visit a zoo while at the Gold Coast, make it this one. Currumbin is a wildlife sanctuary with an emphasis on education and conservation of Australian animals.You won’t find any lions or elephants here, but plenty of roos, koalas, and local birds.

There’s a variety of shows and presentations throughout the day. They’re all about education about the different species. There are photo opportunities with plenty of animals too. It was here I had a snake around my neck for the first time, and a baby crocodile in my arms. But if you prefer the cuddly animals, there’s also photo options with koalas and possums. And as to the kangaroos, they live in a walk-in enclosure where you can pet and feed them. 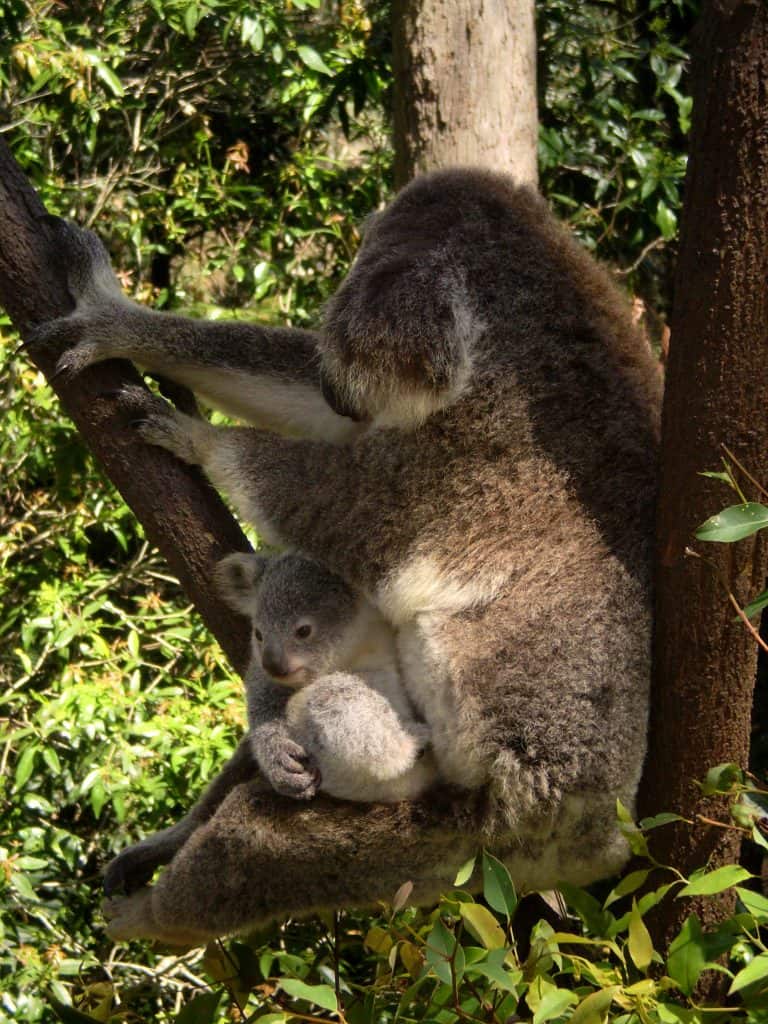 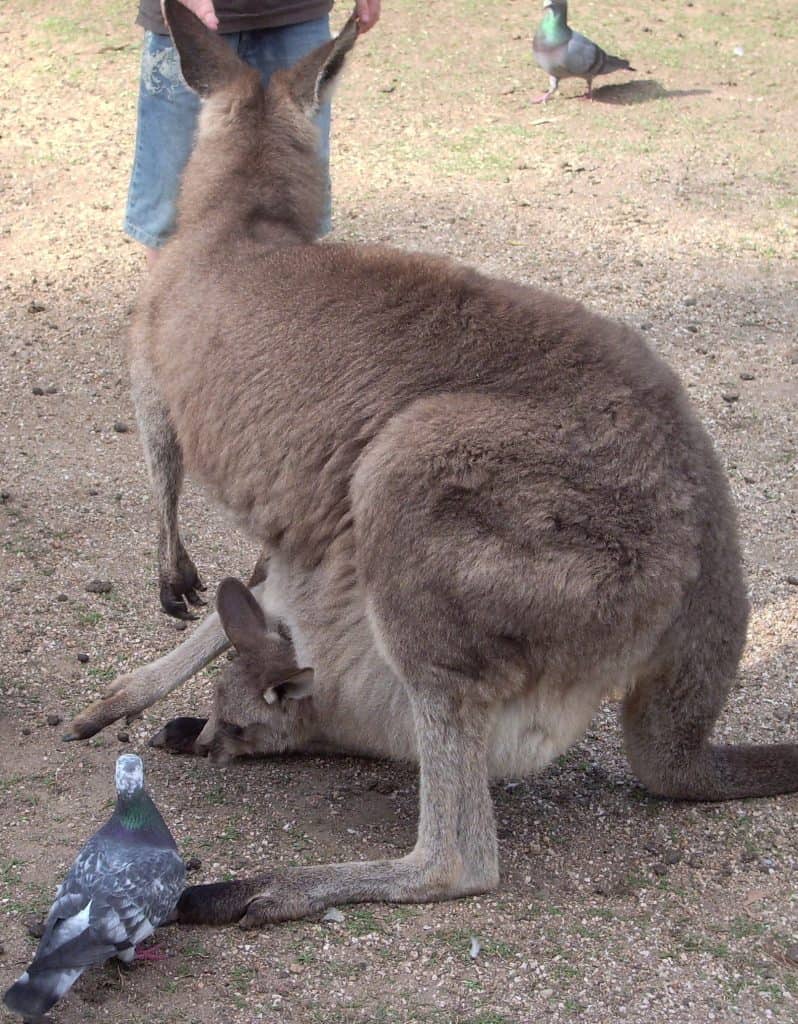 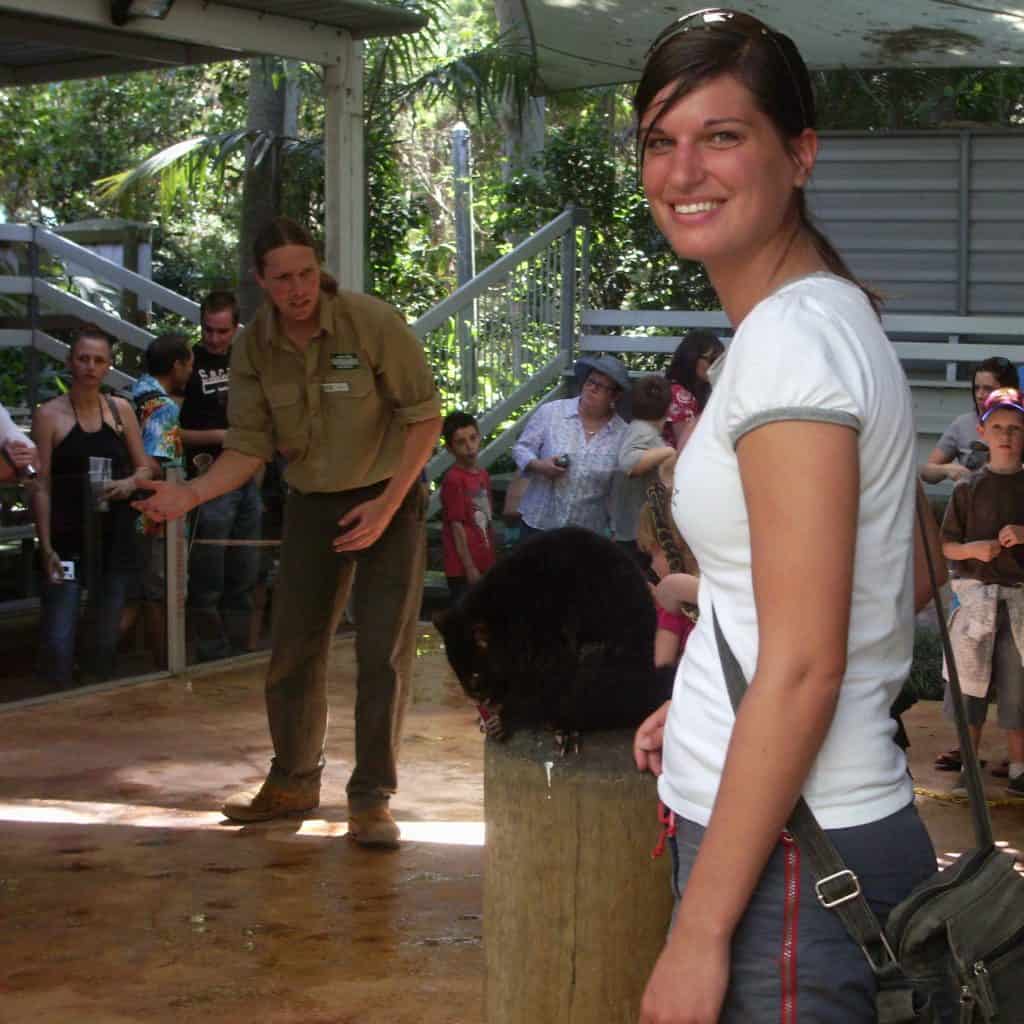 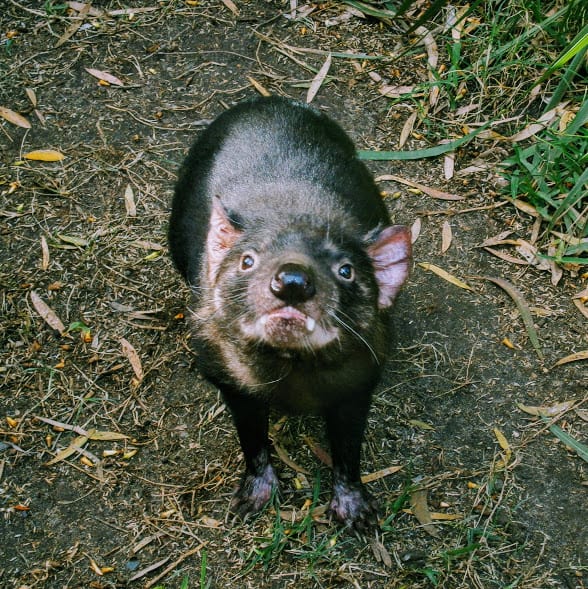 My personal highlight at Currumbin is the feeding of the Rainbow Lorikeets. It’s done twice a day, in the morning when the park opens and in the afternoon. The lorikeets are not part of the zoo, but wild birds who come in for the food. Or they don’t. Being wild, of course there’s a certain unpredictability around it. That’s why I would strongly recommend you to attend the morning feeding. In my experience it has a lot fewer people and a lot more birds. This is truly worth getting up early for. How often do you get the chance to have these pretty birds all over you? 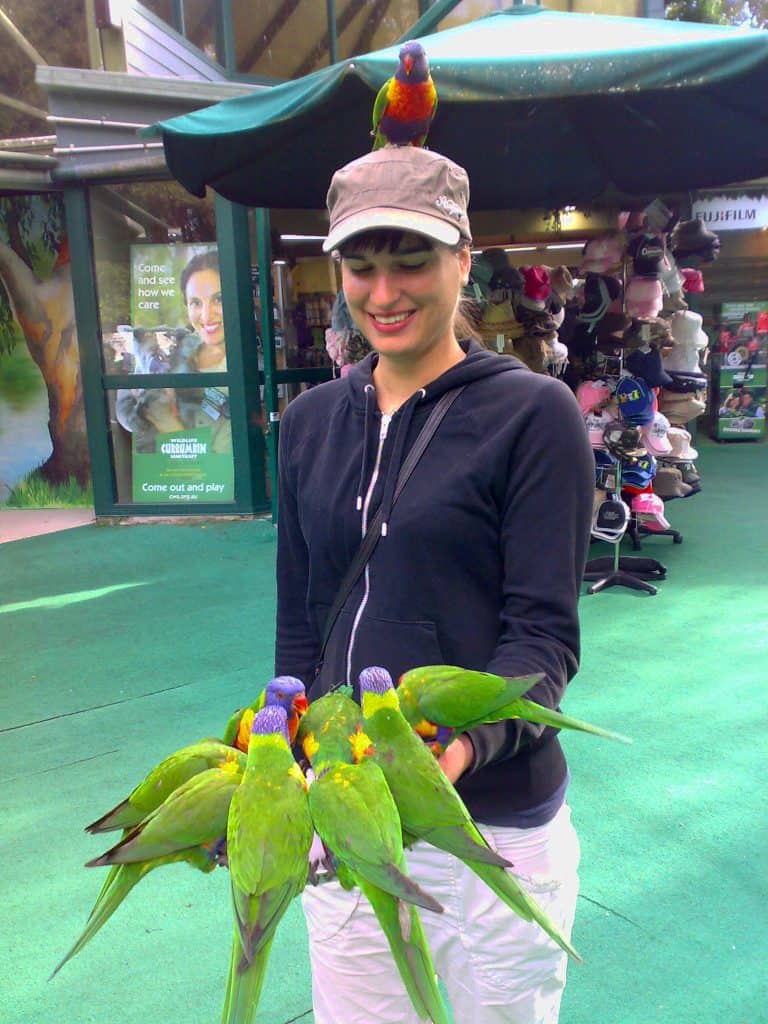 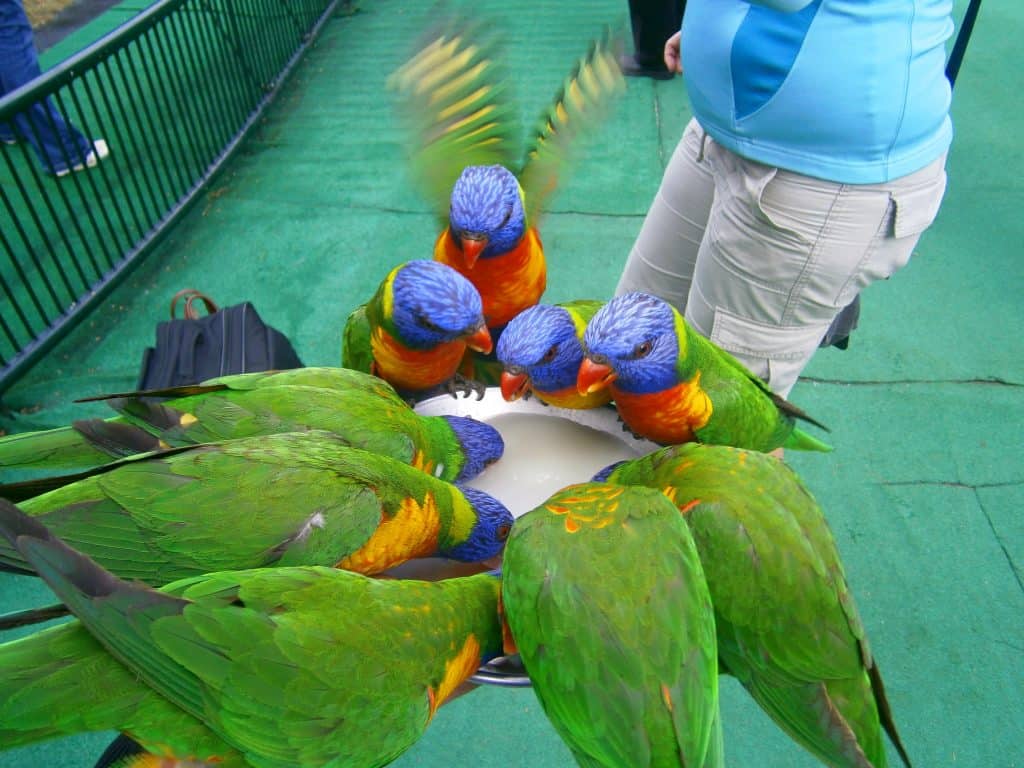 If you’re interested in the preservation aspect of the zoo, visit the wildlife hospital. They don’t only treat their own animals here, but also nurse injured wild animals back to health. If you are interested in making a donation to help their conservation work, check out this site here for more information.

One park is found directly on the Gold Coast: Sea World is in Southport, at the Northern end of the Gold Coast. There’s dolphins, sharks, penguins, seals and polar bears to be seen. Plus some rides and shows. I particularly remember the spectacular waterskiing show from when I was there.

If that’s not enough theme park for you, it’s only a short drive to a whole bunch of other parks. Dreamworld and Whitewater World are part of the same company which means you can get combined tickets and safe a lot of money. Dreamworld is a classic theme park with all kinds of rollercoasters and wild rides. In addition to that it has a small zoo component where it keeps tigers. The water park Whitewater World is right next door. You can move from one park into the next without even leaving the premises.

Almost just across the road from these you find Movie World and Wet’n’Wild. Again, there’s the combination of a theme park, this time one that’s all about the movies, and a water park. These also belong together, and furthermore they’re owned by the same company as Sea World. So safe on park entry by visiting both. 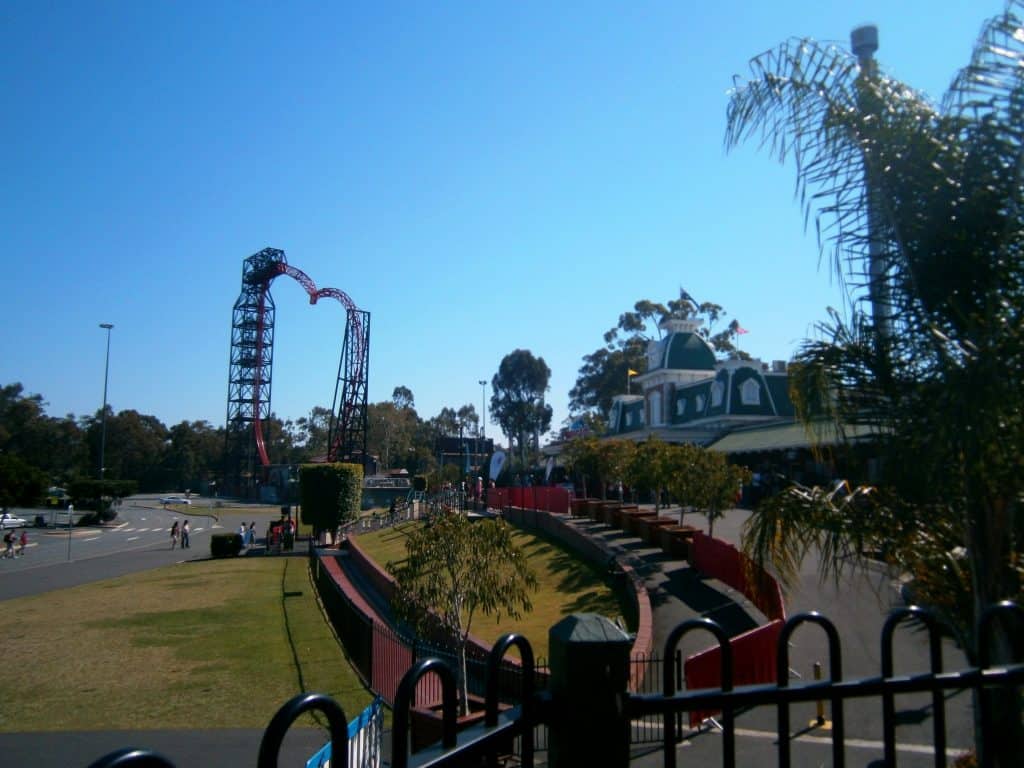 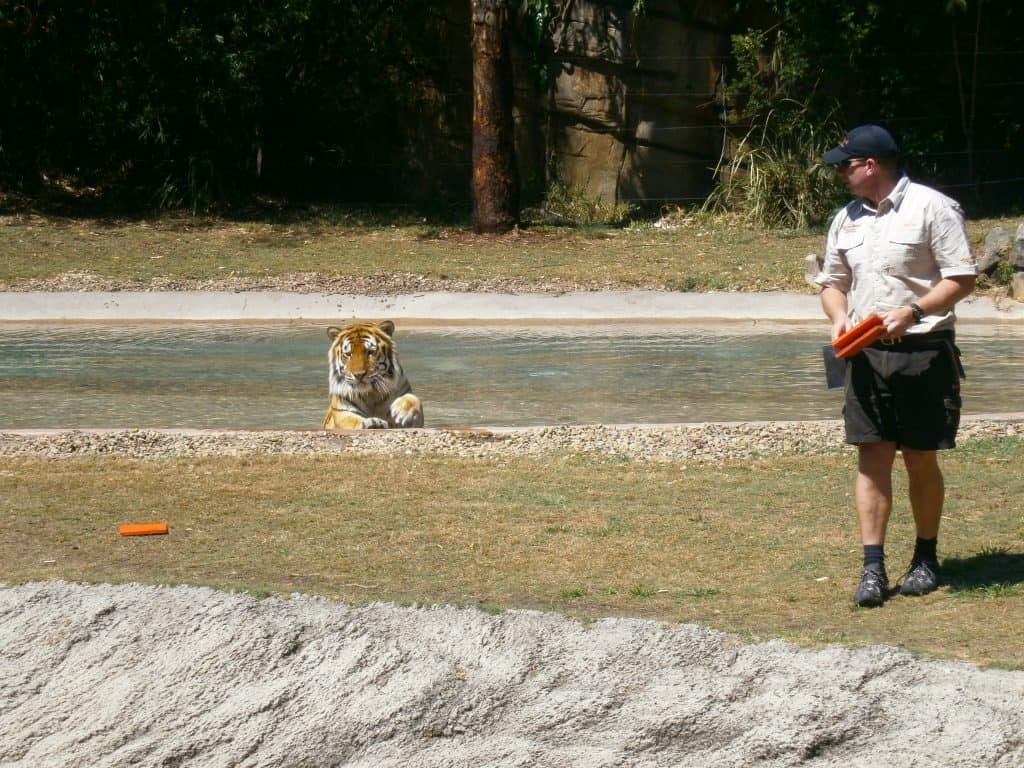 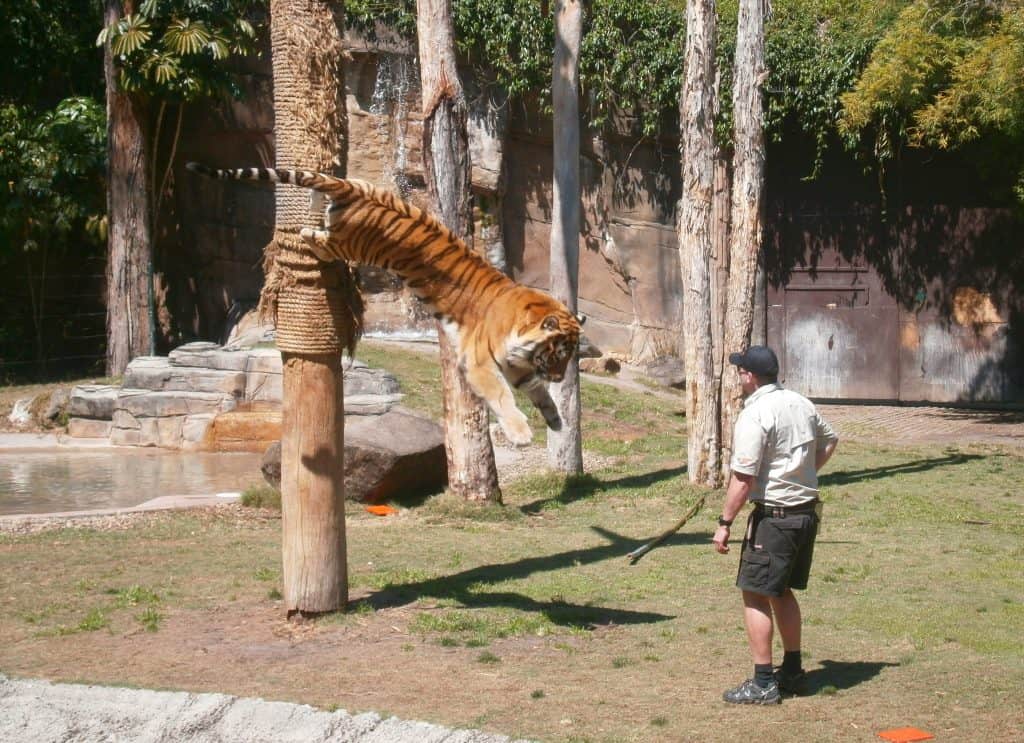 When I stayed with my sister and brother-in-law we did putt putt golfing a lot. There’s several different locations, but we mostly went to this one. They offer three different courses with different themes to them. In the reception area they have a tally that shores the best scores of travellers from all over the world. Ad guess what? In one game, I broke the record for Germany! That was over eight years ago, and I haven’t been back since. So I assume someone better may have come along in the meantime. However, if you happen to go golfing there maybe you could check and let me know. 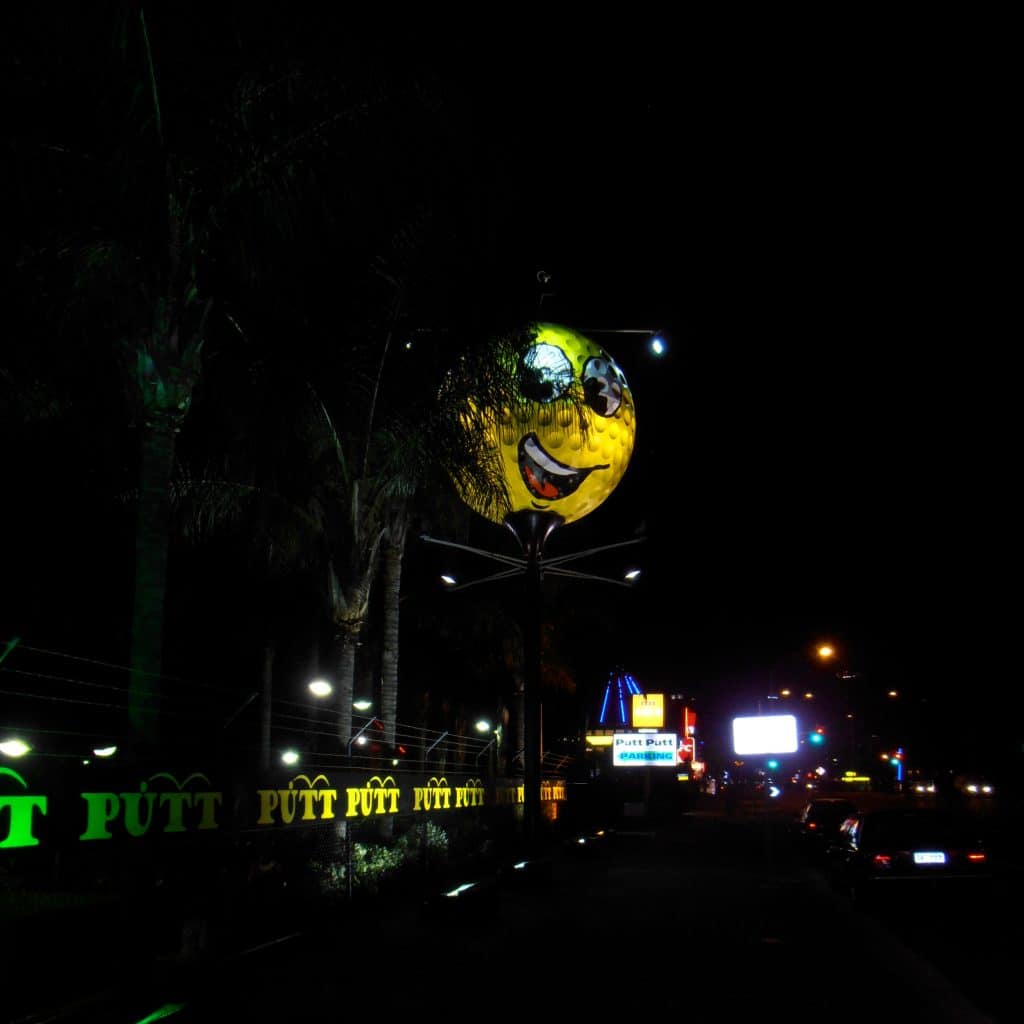 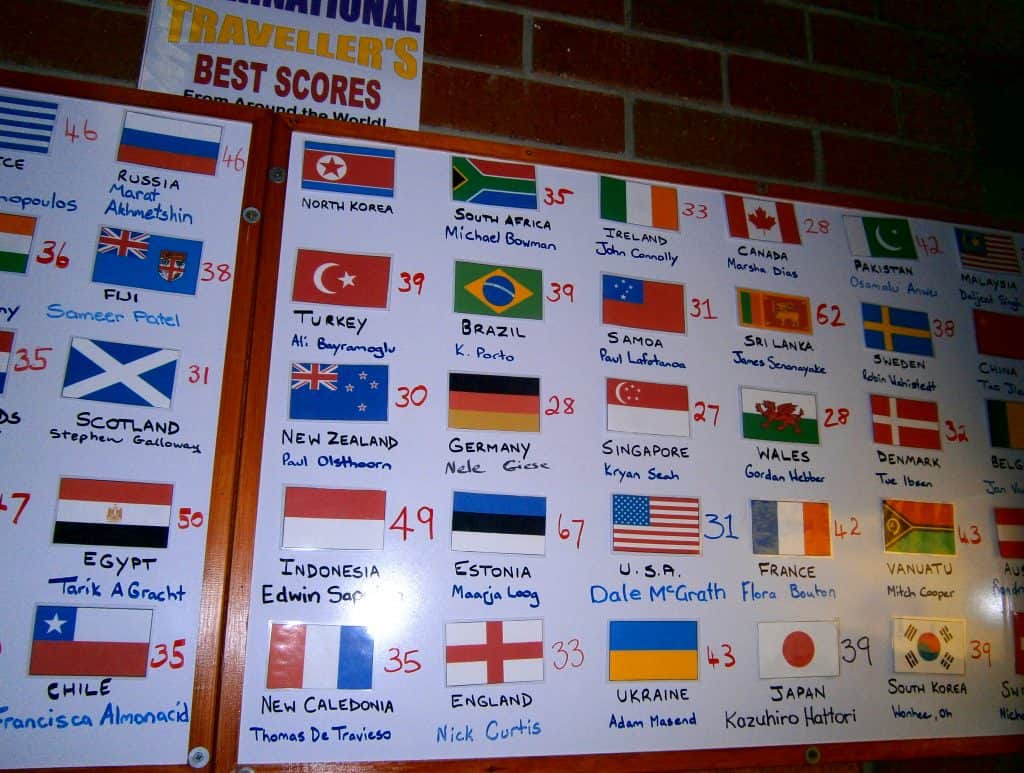 Check out the German flag. Yep, that’s me.

Have you been to the Gold Coast? What do you love most about it? Or if you haven’t been, what interests you most? Share in the comments!