Warning: Parameter 2 to wp_hide_post_Public::query_posts_join() expected to be a reference, value given in /home/customer/www/globalintrovert.com/public_html/wp-includes/class-wp-hook.php on line 292
 5 new things I just learned about London • Global Introvert Skip to content

I have been to London quite a lot in the last few years. To be precise, this March was my fifth time in the city. I travelled with two friends, one of whom was a first-time visitor. That meant we did a lot of the typical tourist stuff, visiting all the major London attractions that I’ve done plenty of times before. I didn’t mind though, because even though I hardly visited anything I hadn’t yet seen, I still discovered some new sides of this familiar city – and learned a few lessons, too. 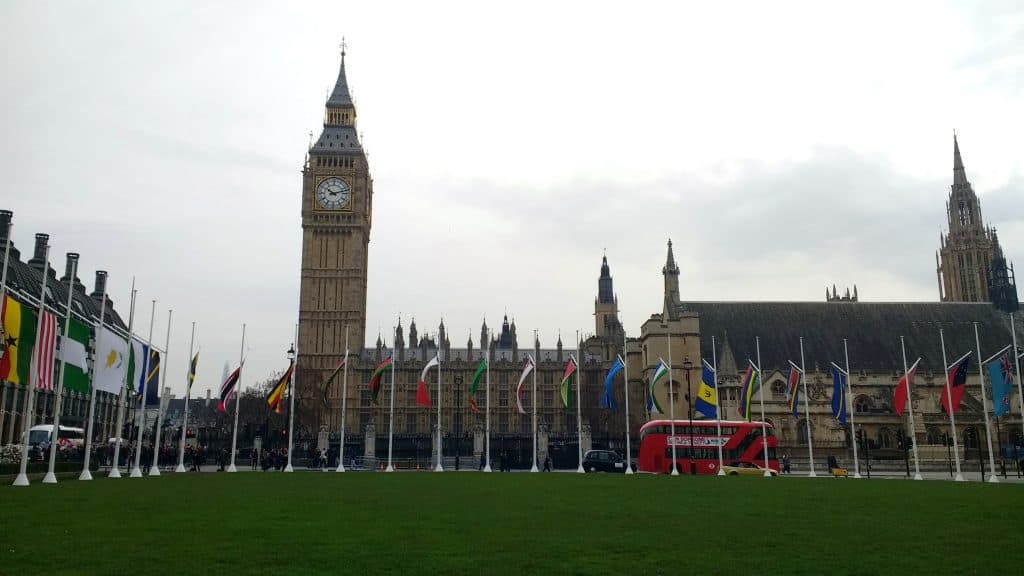 I can’t even count the times I’ve walked over the Tower Bridge, strolled down the Queens Walk or wandered around the Tower, taking in the views on both sides of the river. But as I’ve mostly been to London in summer, I don’t recall having ever done it in the dark.

That was different this year, because we all know in March it still gets dark pretty soon. So for the first time I came to see the London skyline and the Tower Bridge by night – and it was magnificent. The skyscrapers shine in all kinds of lights, as does the famous bridge.

My friend discovered a little fountain at Queens Walk that was lighted in different colours. With the Tower Bridge as background, you pretty much can’t find a better spot for pictures. But see for yourselves! 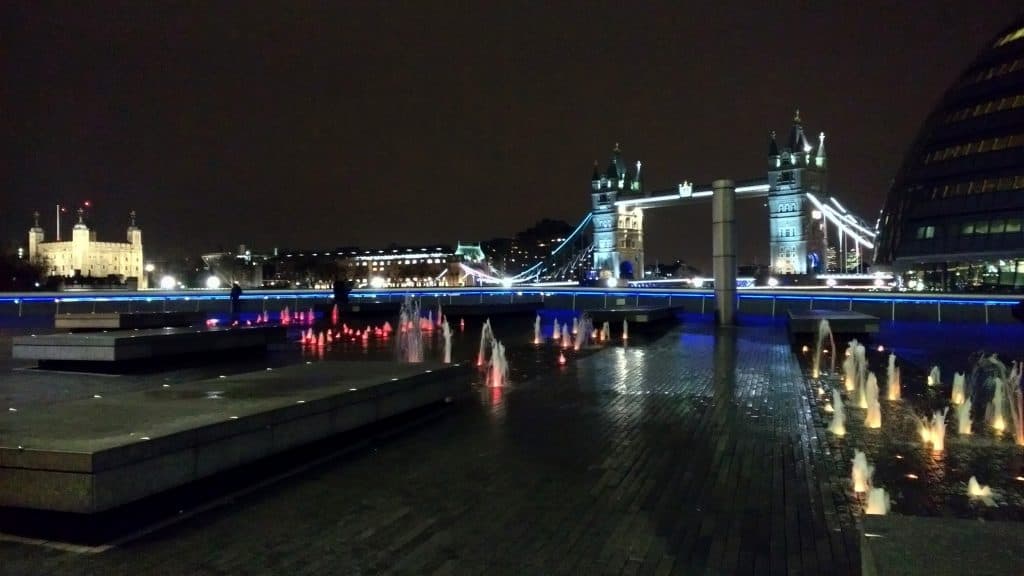 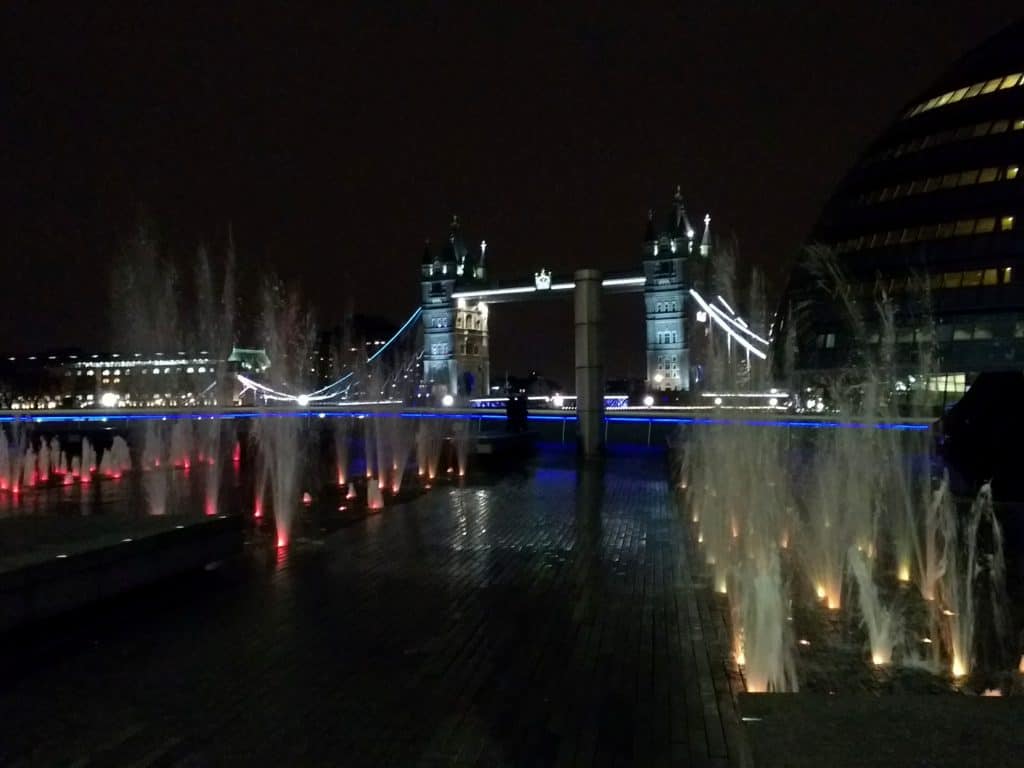 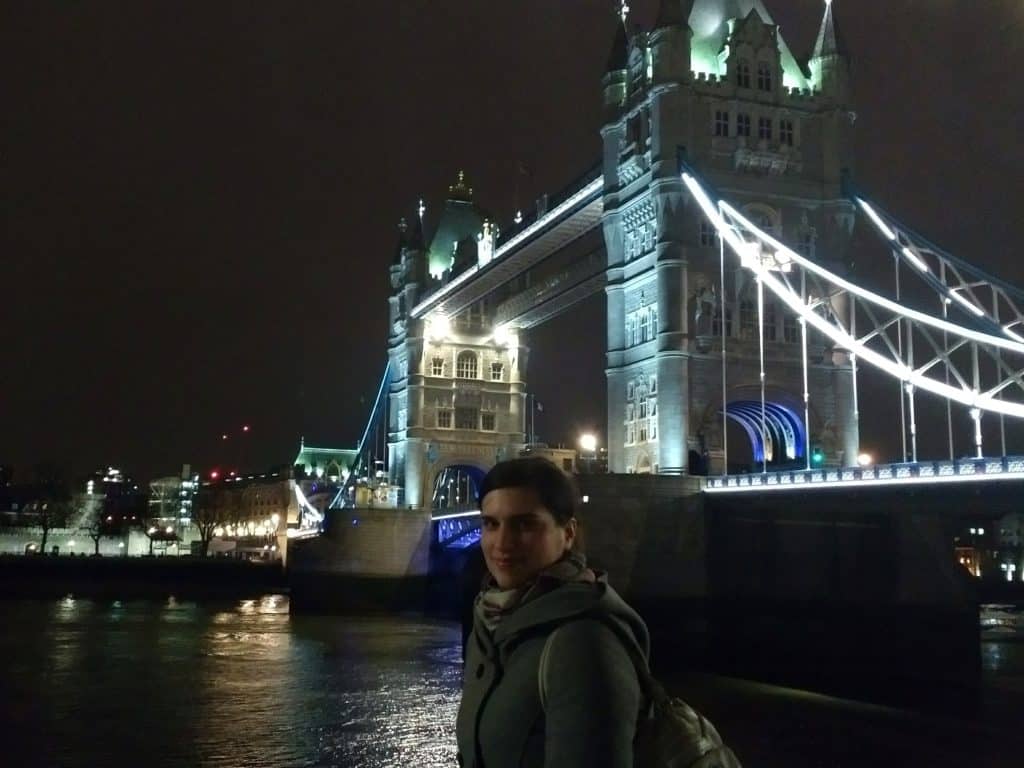 London Eye in the rain

Overall we were very lucky with the weather in London. I usually am when I travel there. Really, I don’t understand why London weather has such a bad reputation. I mostly remember sun and heat. This march, too, it was warm – far warmer than expected even, leaving us sweating in hour heavy coats.

It was also dry. Mostly. Except, of course, the morning we visited London Eye.

I’ve been on the London Eye before when it was sunny, and the view is beautiful. When it rains, it’s still beautiful, only you can’t prove it because when you try to take pictures all you get is raindrops. So if you’re planning on visiting this landmark, please be wiser than us, and be sure to check the weather forecast so it’s not raining. 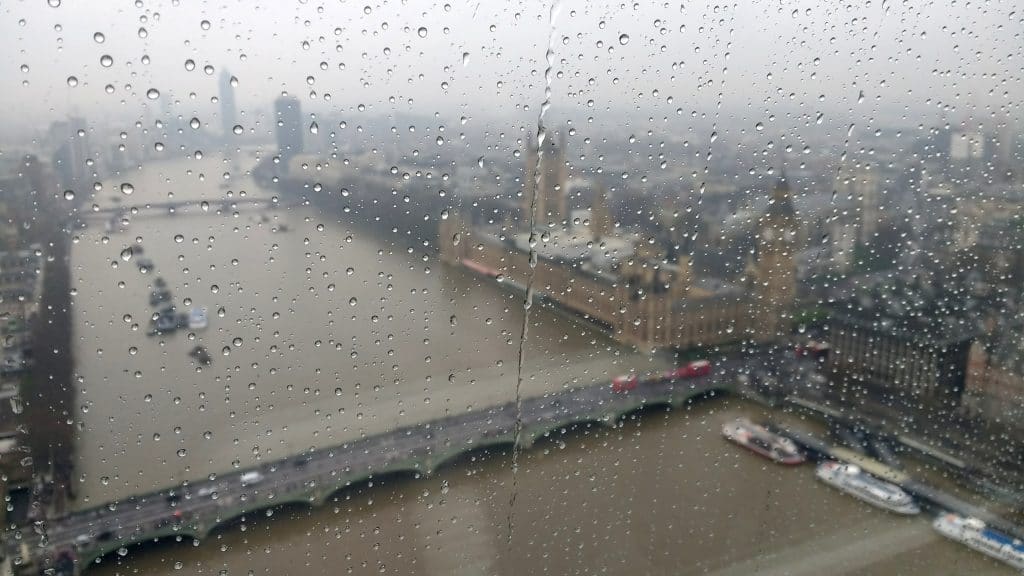 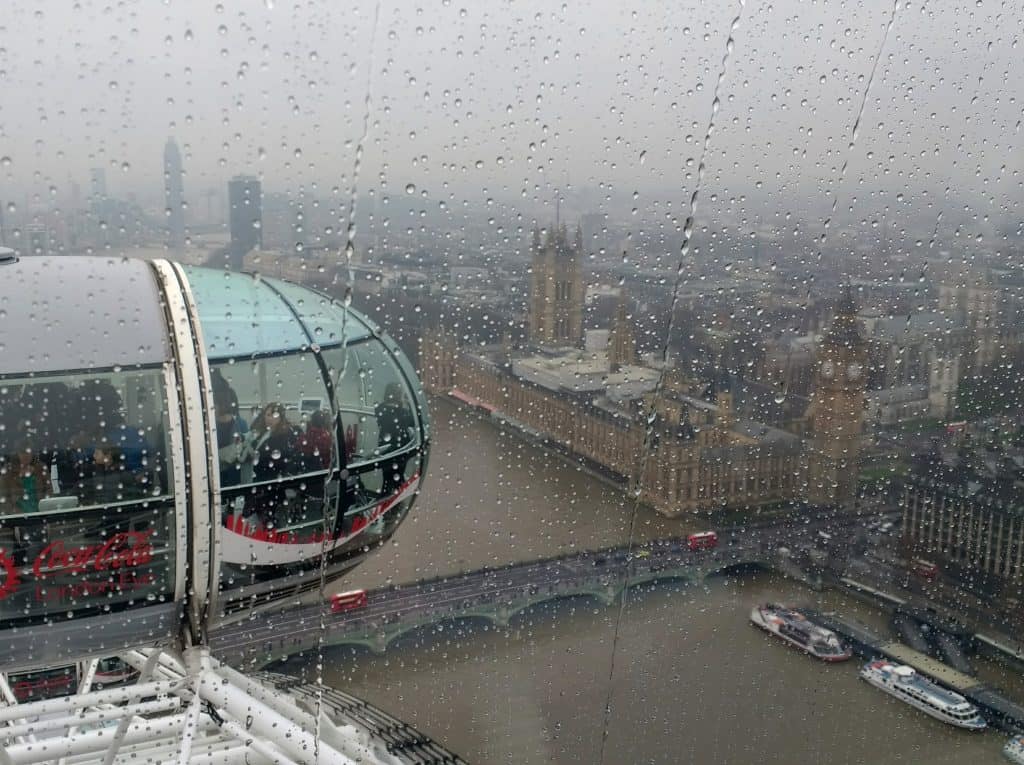 If you visit Sherlock Holmes famous address, there is a guy dressed up in a Victorian police uniform at the entrance. Strictly speaking his job is to check tickets for the entry into the museum, but obviously he’s also taking photos with all the tourists. The patience with which he does this is astounding.

We took a few photos, thanked him, and left. Then we realised we hadn’t taken single photos, so we came back and did that. When already walking away again, we had a new photo idea and returned a third time…you get the picture.

Every single time he was nothing but nice and friendly, and patiently took any silly photo we could think of, as many times as we wanted. And that despite the fact there was a huge line of people waiting to enter the museum.

I also happen to know that the exact same guy already did this job last year (there’s a photo somewhere to prove it). I guess there must be something enjoyable about being photographed all day. 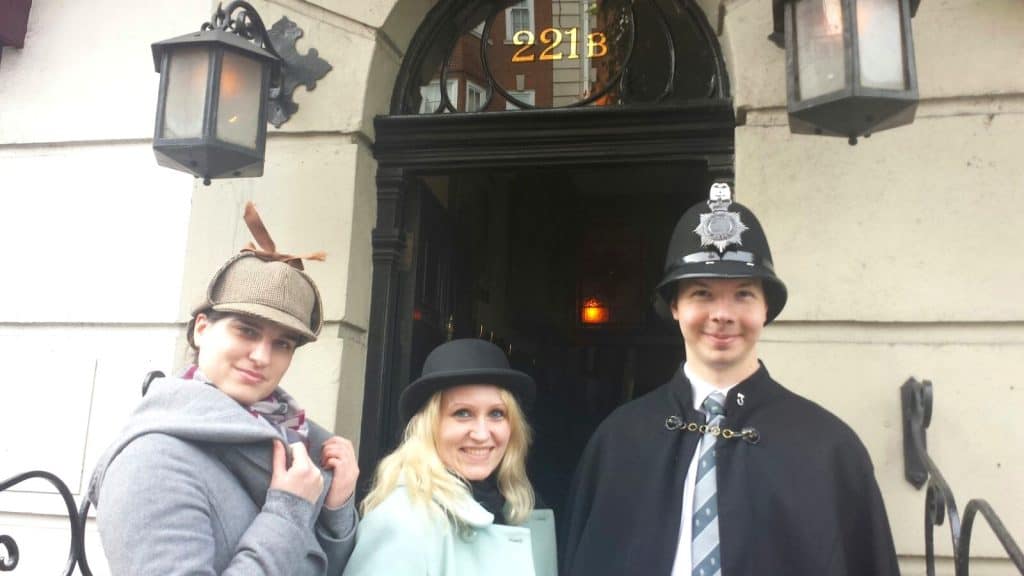 There was some construction work going on during our visit, which caused the underground to be closed in the Northern part of the city. This proved a problem when going to Baker Street, King’s Cross and some other destinations we wanted to get to. We often had to take longer routes to get where we wanted to go. And sometimes, there was no other choice but walk.

I’m a great fan of walking, because I find it’s often the best way to see a city. Mostly because you actually see it, rather than just sitting in an underground staring at the tunnel wall. But of course in a city the size of London you simply can’t walk everywhere.

However, when we were forced to walk to Baker Street from our hotel at Paddington it showed us a new part of town that none of us had ever been to before – and that we probably would never have gone to if it hadn’t been for the closed underground. Shows you that sometimes perceived obstacles turn out to be chances in disguise. 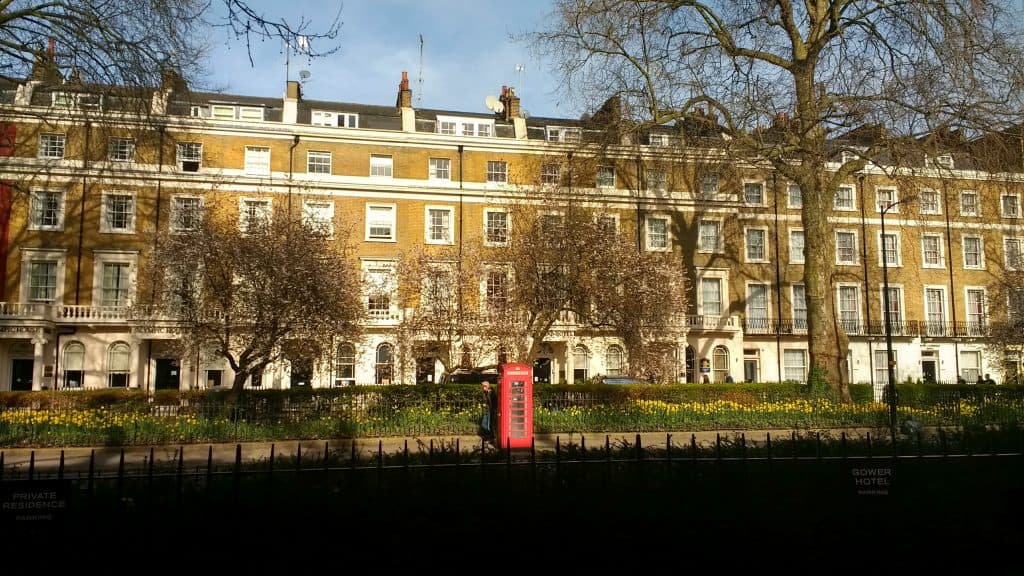 The TARDIS is more fun with friends

Yes, I know, it’s not actually a Tardis, it’s a police box. Situated right at Earl’s Court Station, and as far as I know the only one still standing in London. But come on, Tardis is so much cooler.

I was there two years ago, but I was on my own in London at the time, and thus had to ask a stranger to take a picture of me. I specifically asked someone who had just taken a photo of it himself, in the hope of finding a kindred spirit. It didn’t work. While he agreed to take the photo, he looked at me as though I had lost it a little.

This time I returned with friends, and at least one of them was also a Doctor Who fan. Which meant we could take pictures of each other for ages without the need to be embarrassed about it. So much more fun. And a so much better result! 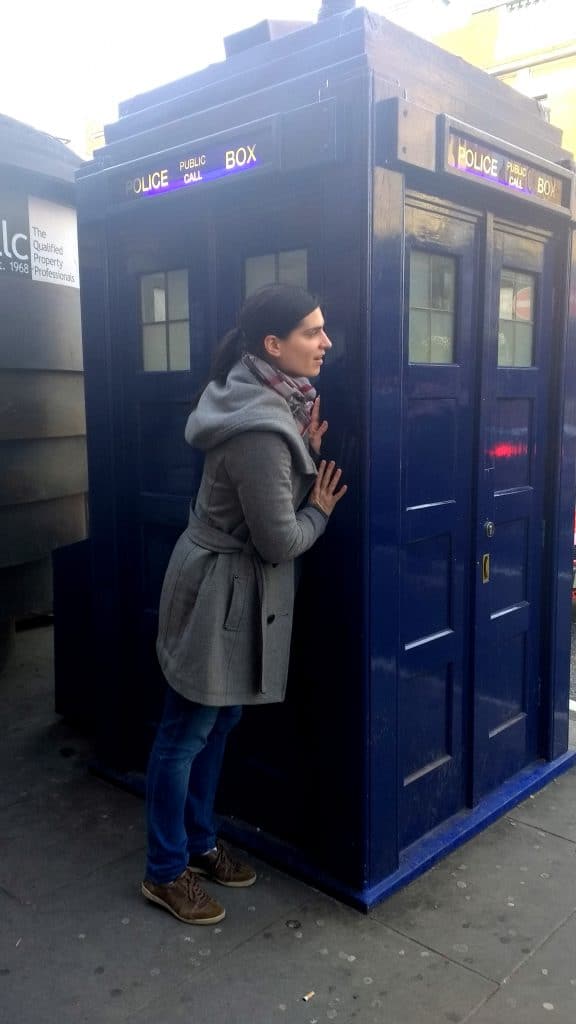 This is what I love about London. There’s always something new to discover, something else to do, or something familiar to do in a new way. It’s a city where it’s simply impossible to get bored. And I already have such a long to-do list for my next visit…

How many times have you been to London? What new things have you discovered? And what do you like to always come back to? Share in the comments! 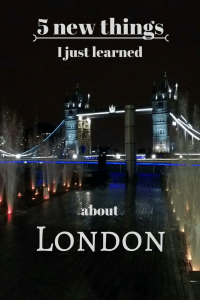